If you have visited one of the three New York State Thruway rest stops that were rebuilt and reopened within the last few months, then you may have some thoughts about their size. 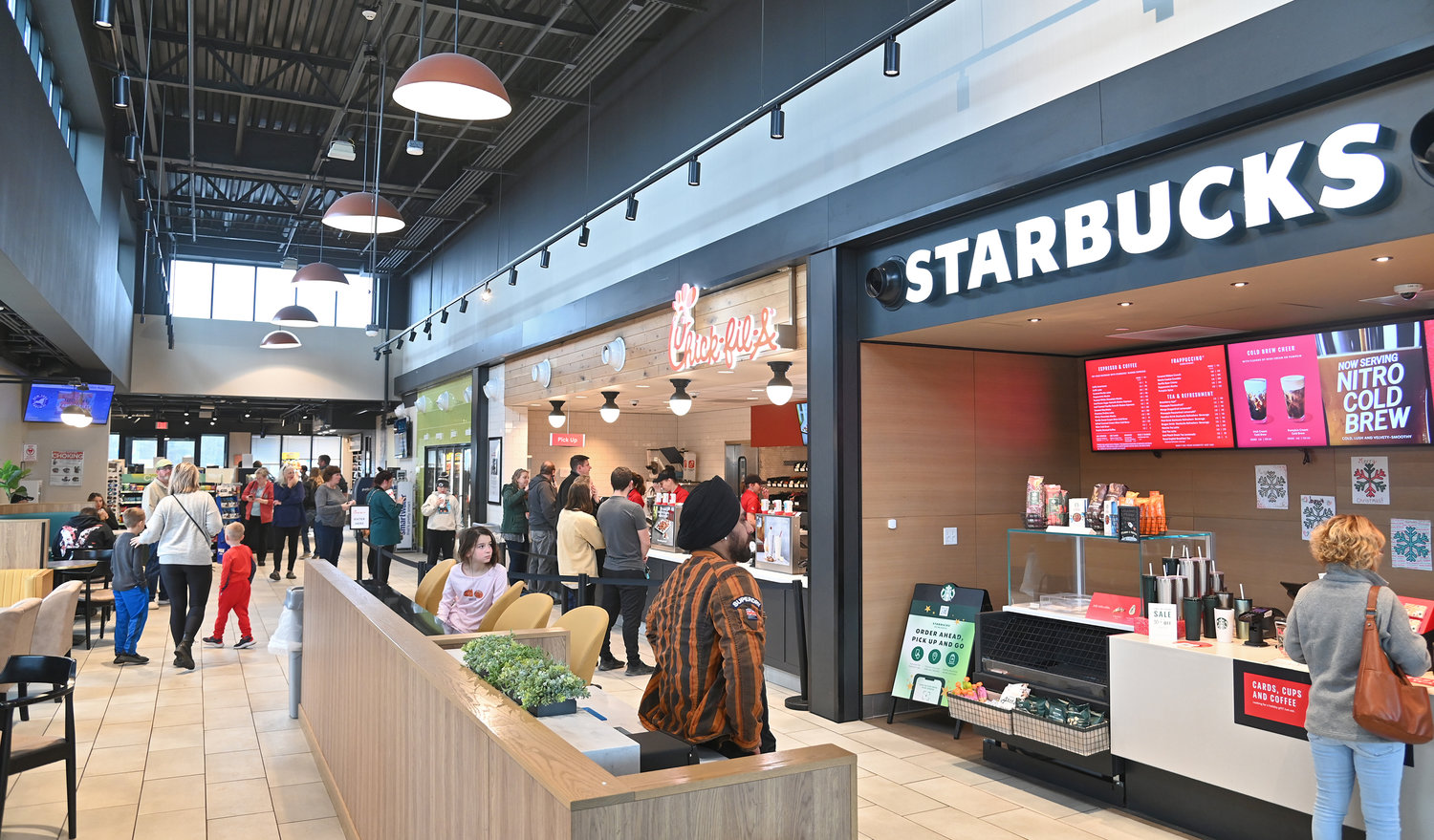 The interior of the Chittenango rest stop on the New York State Thruway is shown on Friday, Dec. 30. The rest stops, which are in the midst of a major reconstruction, vary in size, with some travelers criticizing the smaller size of some of the rest stops, such as the one in Chittenango.
(Sentinel photo by John Clifford)

Exterior of the Chittenango rest stop on the NYS Thruway December 30, 2022.
(Sentinel photo by John Clifford) 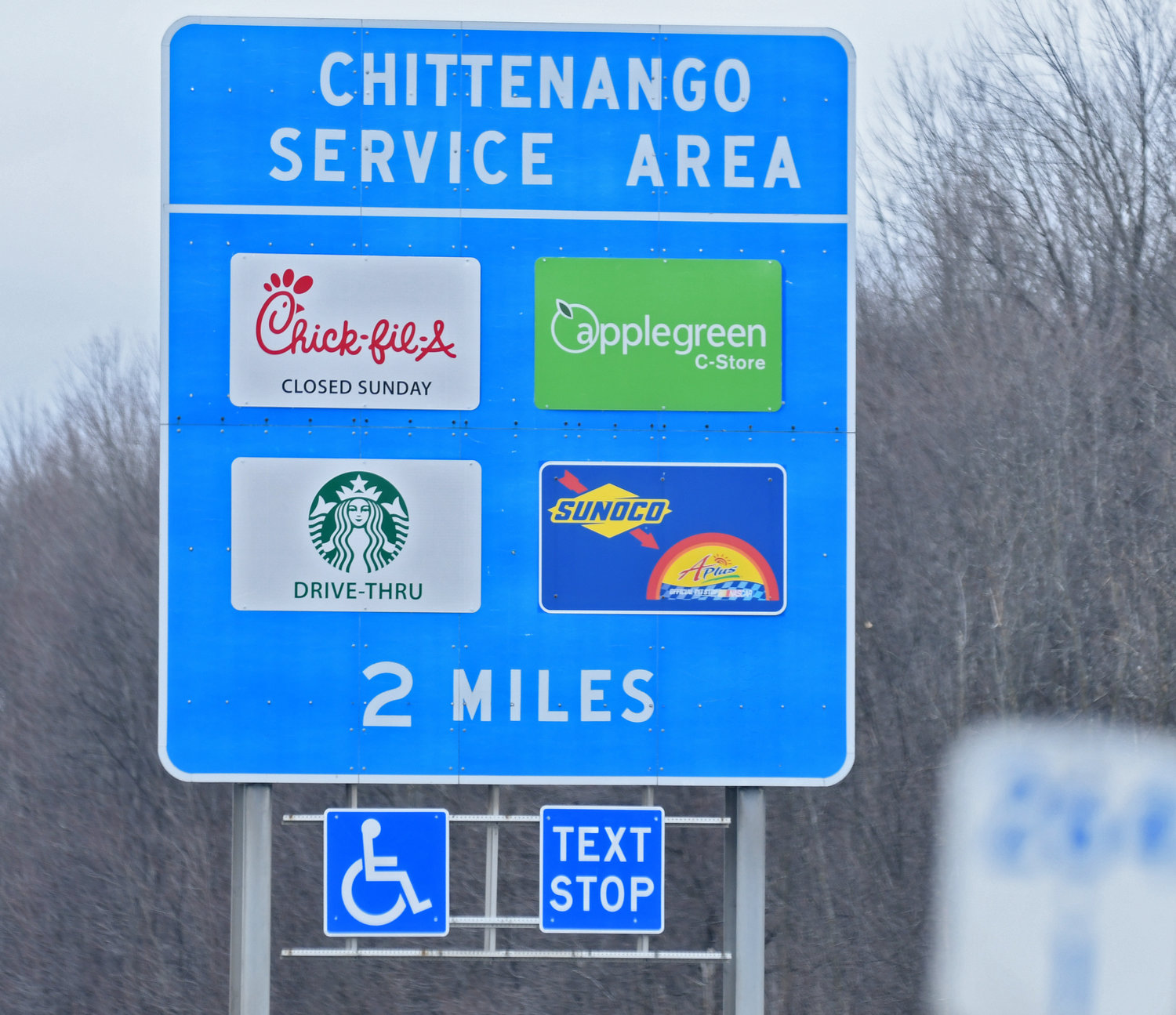 View of a sign going westbound on the NYS Thruway what is at the Chittenango Service Area Friday, December 30, 2022.
(Sentinel photo by John Clifford)
Previous Next
Posted Saturday, December 31, 2022 1:10 pm
Robert Harding, The (Auburn) Citizen

If you have visited one of the three New York State Thruway rest stops that were rebuilt and reopened within the last few months, then you may have some thoughts about the size of these new facilities.

A common criticism is that these new service areas are too small. The Thruway Authority has told the public that not all of the rest stops will be the same size. The first three to open as part of a $450 million project — Chittenango, Indian Castle and Junius Ponds — are among the smallest service areas to be reconstructed.

On its website, the Thruway Authority says that Empire State Thruway Partners, which was awarded a 33-year contract to rebuild and operate the service areas, “planned different levels of service for each service area location based on sales history and traffic data over the last 10 years, as well as current services offered to the traveling public and services they’d like to see in the future.”

The Thruway Authority has assigned “levels” to the 27 service areas. The levels indicate the size of the rest stop and how many “food concepts,” or restaurants, will be on site. All service areas have convenience stores and restrooms.

This is the smallest of the six levels and covers two service areas — DeWitt (Interstate 90 eastbound near Syracuse) and Schuyler (I-90 westbound between exits 30 and 31).

The level 1 rest stops will be 3,896 square feet with one restaurant and a convenience store. Once rebuilt, DeWitt will have a Starbucks and Schuyler will have a Dunkin Donuts.

A level 2 service area is 5,742 square feet and has two restaurants along with a convenience store. For example, Junius Ponds Service Area has Shake Shack and Starbucks.

The difference between level 2 and 2A is significant — a level 2A service area is more than twice the size of a level 2 rest stop. The 2A service areas will cover 14,654 square feet.

The added space allows the level 2A service areas to have three restaurants with a convenience store. Ontario Service Area, which will be rebuilt in the second phase of the project, will have Burger King, Panera Bread and Starbucks.

A level 2B service area is the same size as a 2A (14,654 square feet) but will have amenities for truck drivers. When the Thruway Authority detailed the $450 million project in 2021, those amenities included fitness centers, laundry facilities and showers.

The seven rest stops at this level will be among the largest on the Thruway. The service areas will be 20,145 square feet and feature six to eight restaurants with convenience stores.

The Thruway Authority has already announced four of the restaurants at Clifton Springs, which is scheduled to open in early 2023. The service area will have Auntie Anne’s, Chick-fil-A, Shake Shack and Starbucks.

A level 3B service area will have the same number of restaurants (six to eight) as a level 3 and cover the same square footage (20,145). The difference, though, is that it will have amenities for truckers — fitness centers, laundry services and showers.

The only level 3B service area is Pembroke (I-90 east between exits 48A and 48), which is under construction and scheduled to reopen in early 2023. The restaurants planned for the rest stop include Burger King, Dunkin Donuts and Panera Bread.

A majority of the rest stops along I-90 (10 of 19) are either level 1 or 2 facilities, including the first three that reopened. But that same stretch of the Thruway will also have some of the largest service areas in the state.

Time will tell if the authority’s prediction is correct.