Three of the four top seeds in the District V American Legion baseball playoffs won their first round games Wednesday in the double-elimination format. 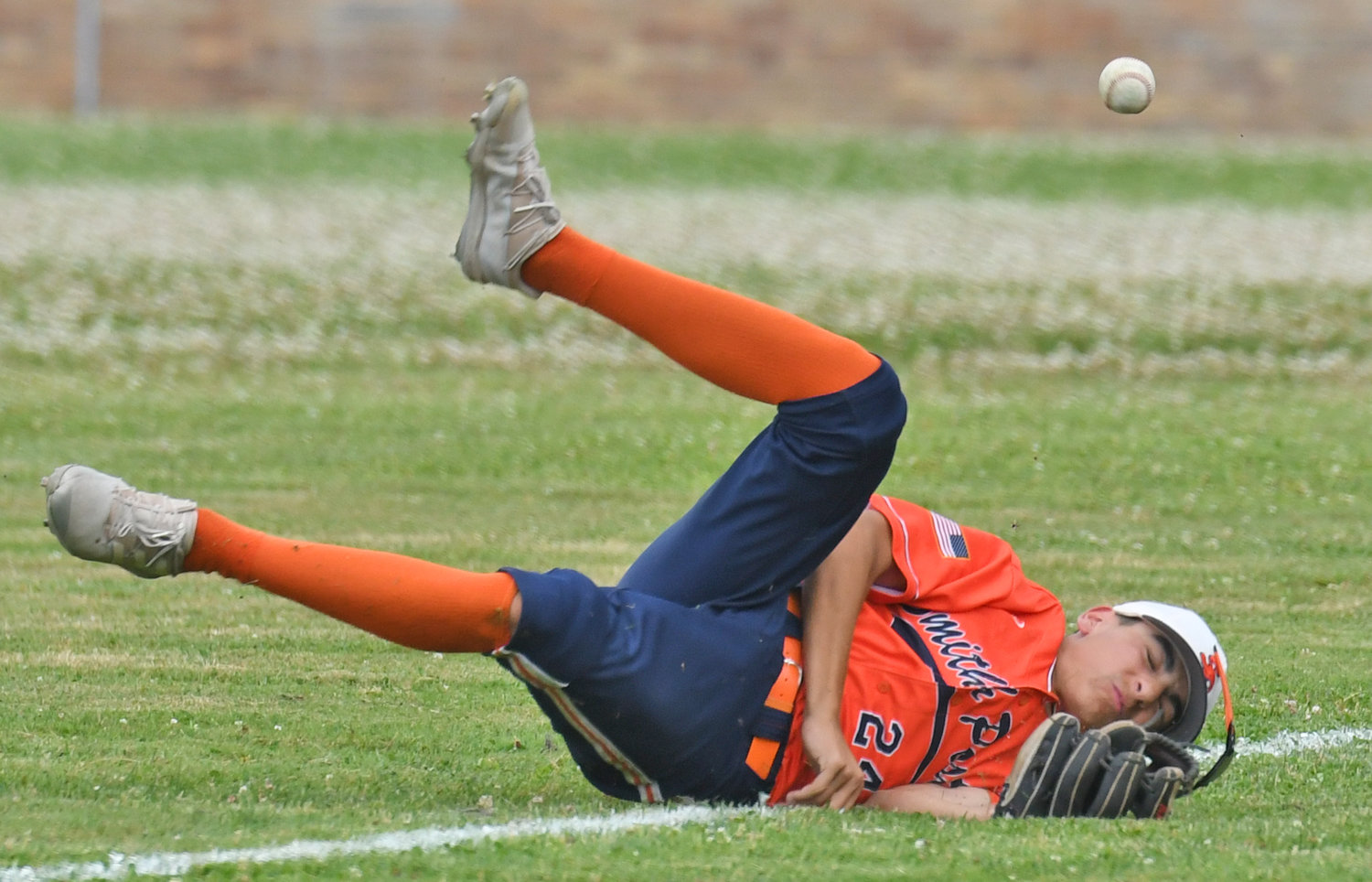 Smith Post's Dominick Tallarino just misses on a fly ball close to the foul line that turned out to be fair.
(Sentinel photo by John Clifford) 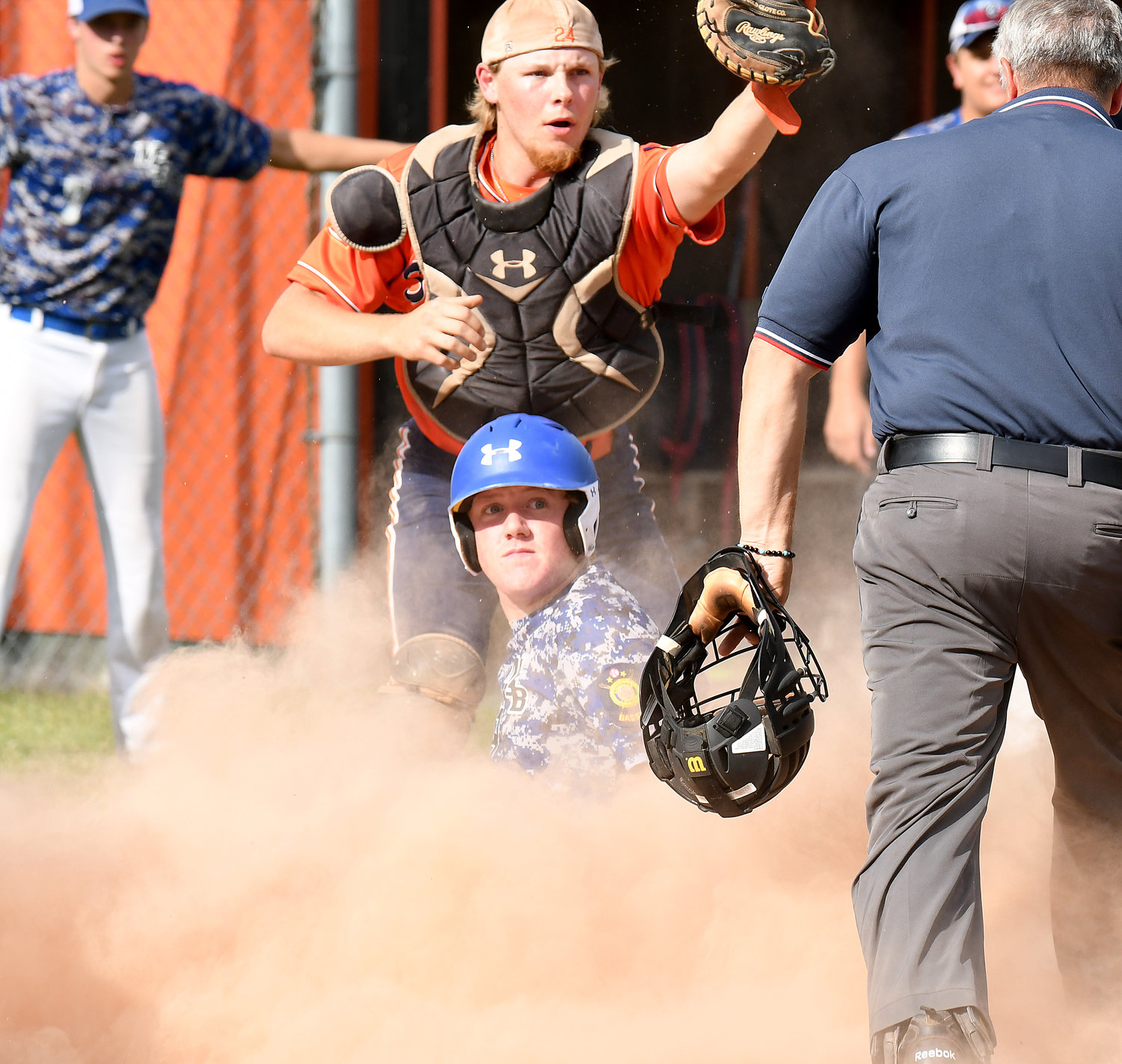 Smith Post catcher Kyle Williamson holds up the ball after tagging out Moran Post baserunner Connor MacArthur at home to prevent a run and close out the top of the first inning Wednesday. Third-seeded Smith won 5-4 over the six-seeded Camden team in the first round of the District V American Legion double-elimination baseball tournament.
(Sentinel photo by John Clifford) 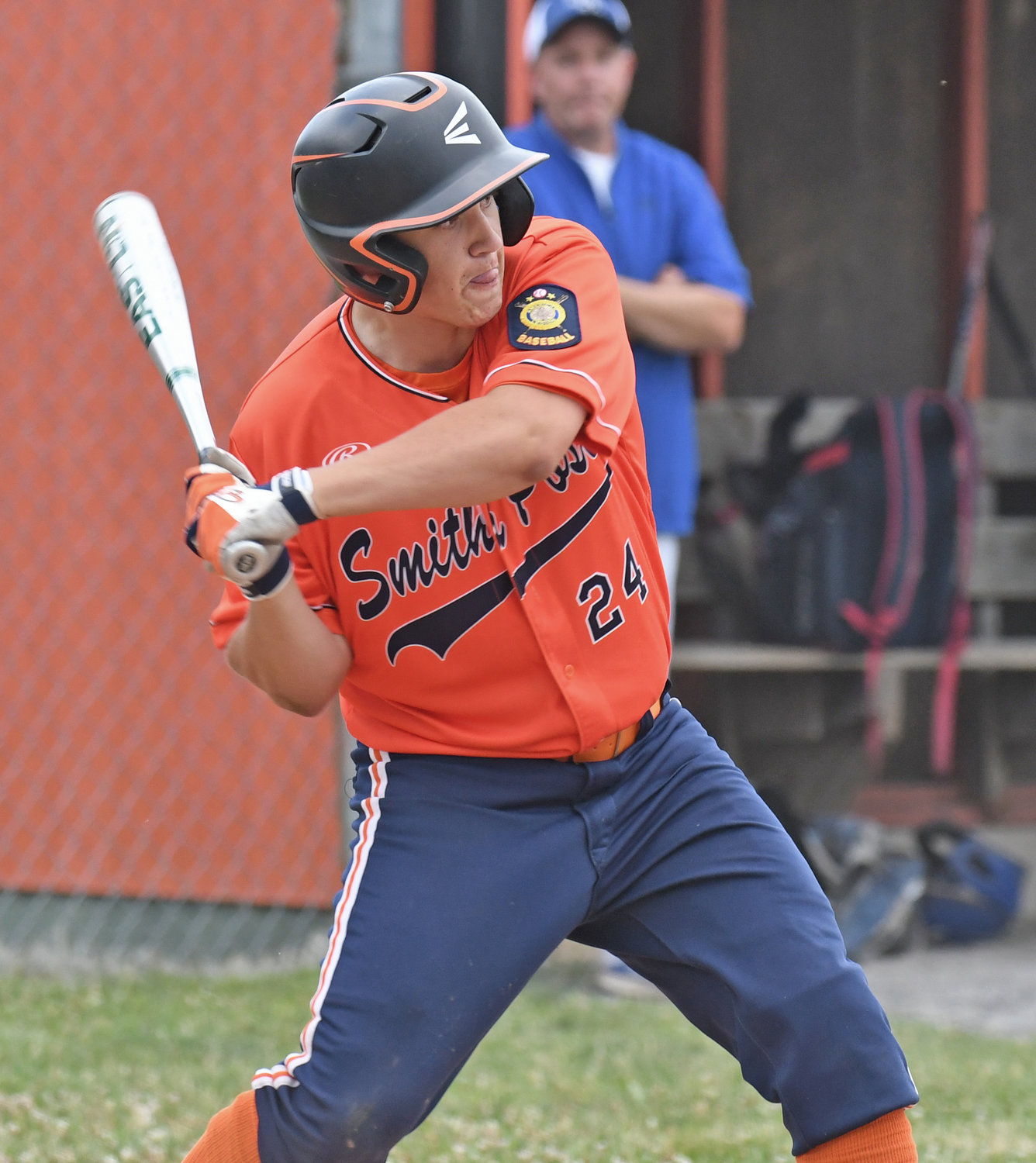 Smith Post batter Mike Flint waits for a pitch against Moran Post on Wednesday at RFA Stadium Field in Rome. Flint had a hit and three RBIs for Smith in the team’s 5-4 win in the first round of the District V American Legion double-elimination baseball tournament.
(Sentinel photo by John Clifford) 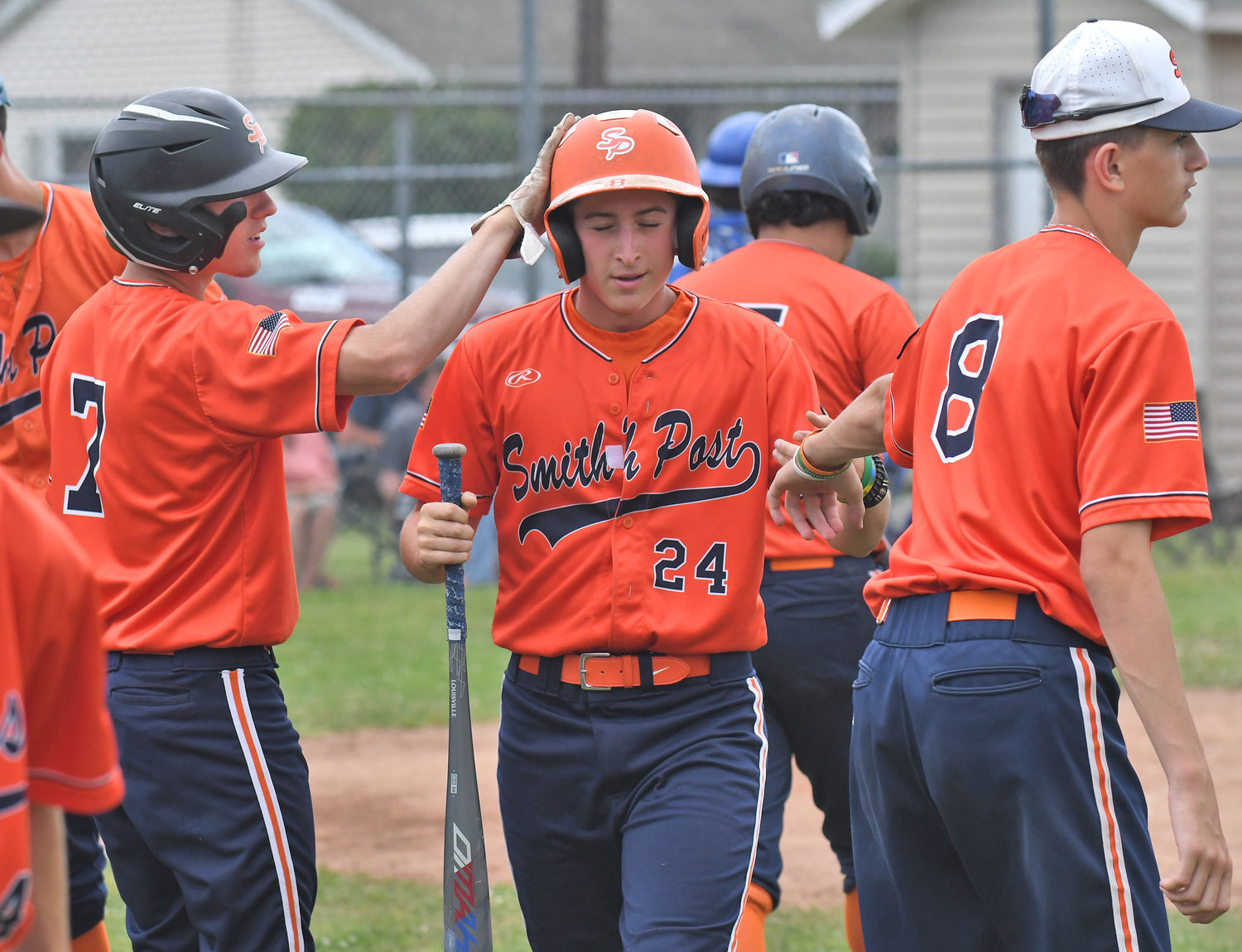 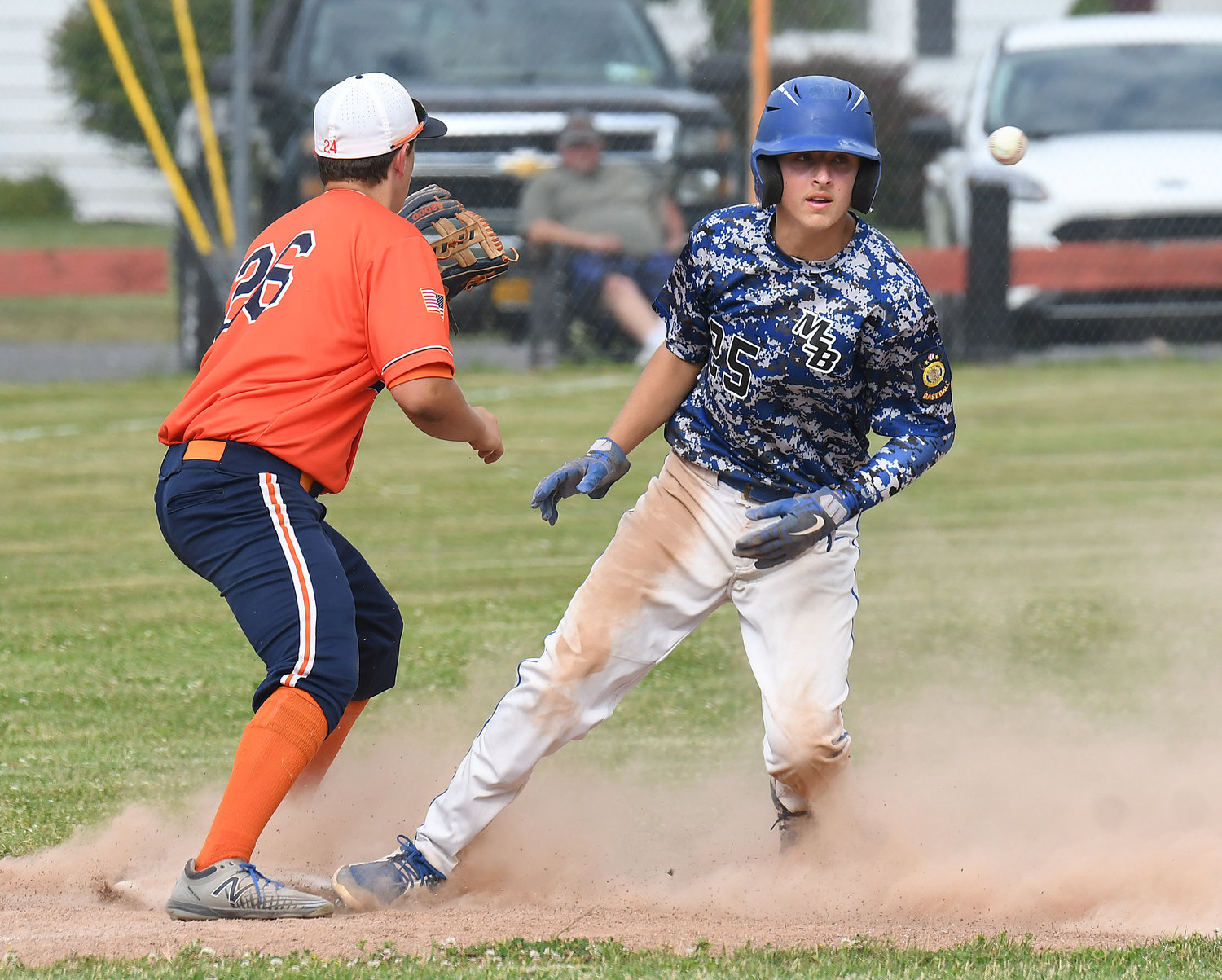 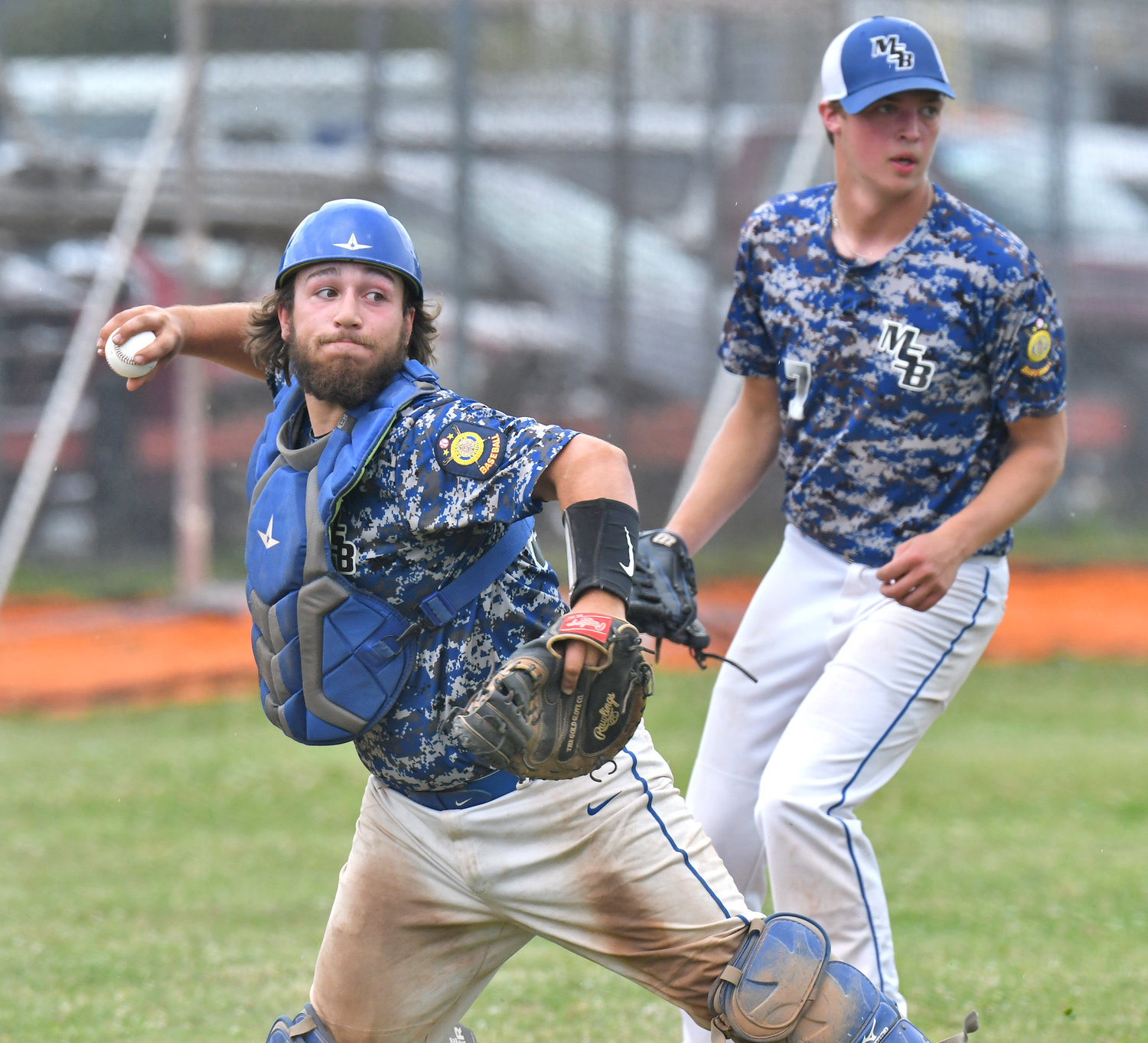 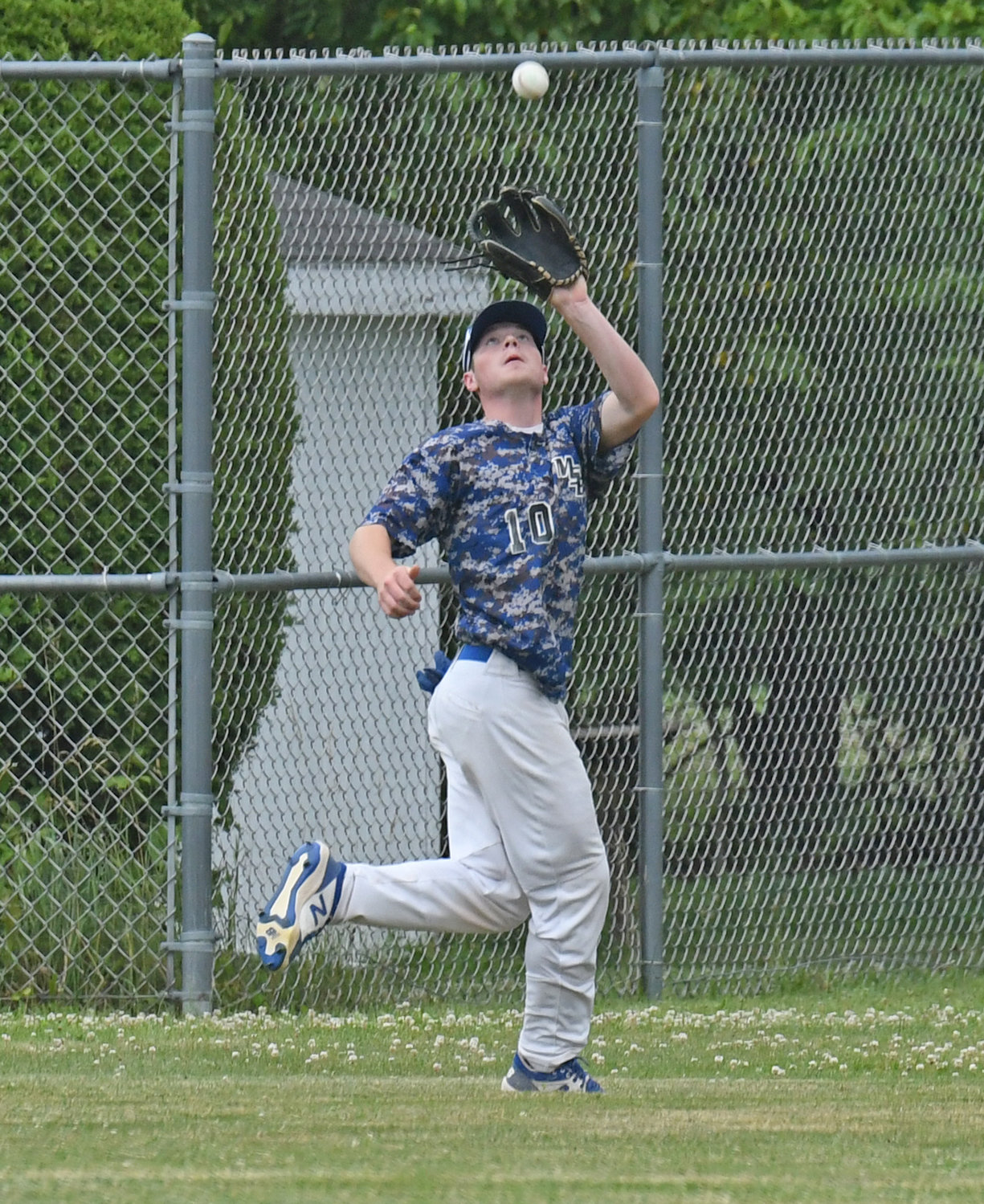 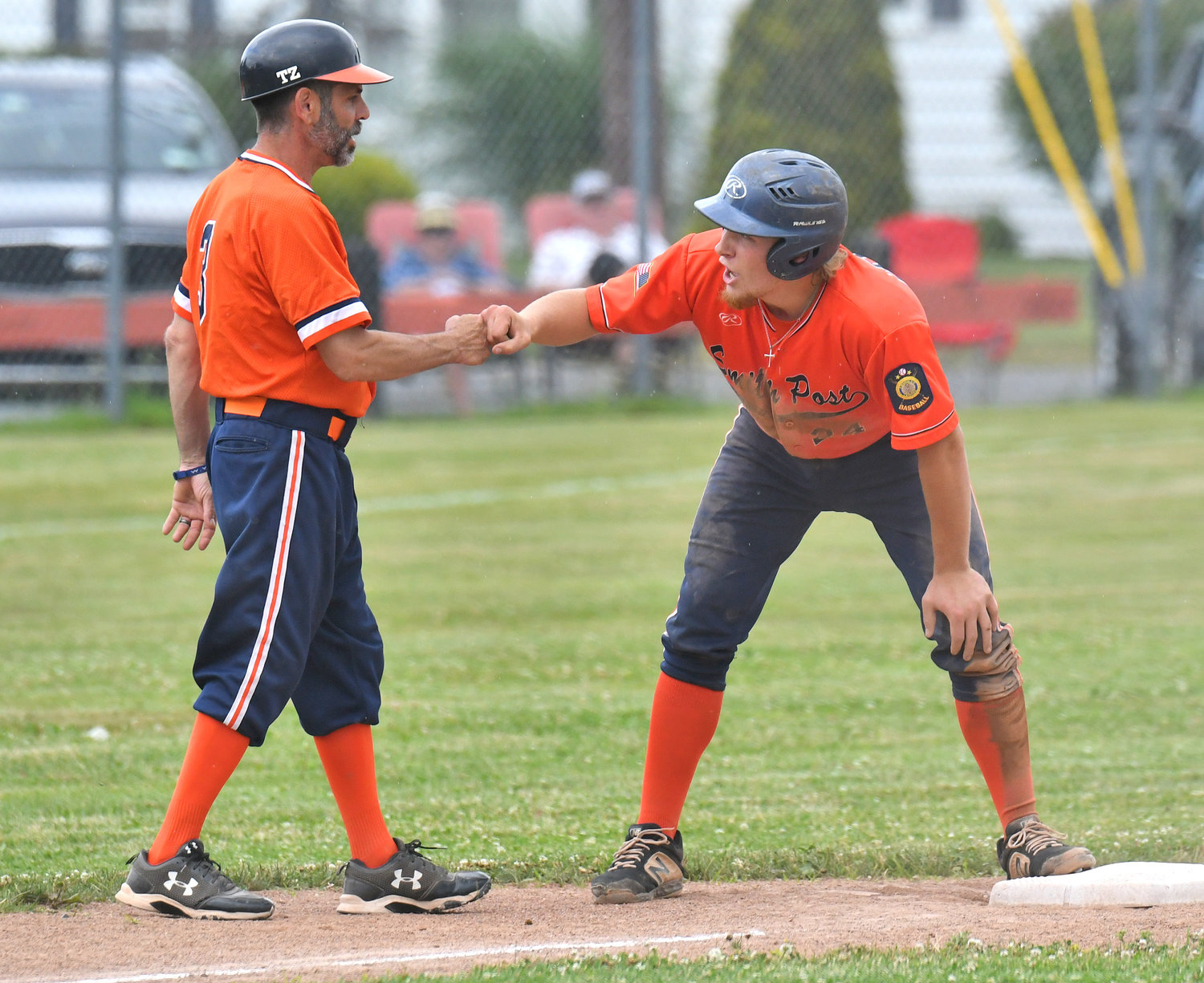 Smith Post baserunner Kyle Williamson gets a fist bump from manager Ryan Hickey after getting on base with a triple.
(Sentinel photo by John Clifford)
Previous Next
Posted Thursday, July 14, 2022 10:12 pm

Three of the four top seeds in the District V American Legion baseball playoffs won their first round games Wednesday in the double-elimination format.

Whitestown Post defeated Oriskany Post 13-0 in a game halted after five innings due to the mercy rule. The hosts scored six first inning runs and added seven more in the third.

Colin Skermont (7-1) started and went three innings for Whitestown in the win. He allowed two hits and struck out eight. Dominick Bullis went the final two innings, allowing only a walk and striking out three.

Ty Kane was 3-for-3 for Whitestown with three RBIs and two runs scored. Skermont had a single and triple, with two runs and two RBIs.

Pitching statistics for Oriskany were not submitted.

Oriskany (5-13) falls into the elimination bracket.

Damon Campanaro earned the win, going five innings. He gave up four runs on five hits and walked four. He struck out five. Derek Holmes earned the save in two innings of scoreless relief.

Statistics for Moran were not submitted.

Ilion Post scored four runs in the bottom of the first inning in a 9-3 win over New Hartford Post.

New Hartford scored all three of its runs in the top of the fourth, but Ilion immediately answered with five more runs to grow its lead to six runs.

New Hartford’s Ryan Chmielewski took the loss. He started but only went 2/3 of an inning, allowing four earned runs on two hits and a walk.

Matt Greene had two hits for New Hartford, as well as an RBI. Rowan Gall doubled, scored and drove in a run. Connor Karwowski doubled and scored.

Game details were not available in Utica Post’s 6-5 win over host Adrean Post.

In another contest, four seed Adrean (9-7) hosted Oriskany. Game results were not available at press time.