As the Utica Comets near the first-quarter mark of the 2022-23 season, a deficiency in terms of consistency is causing missed opportunities. 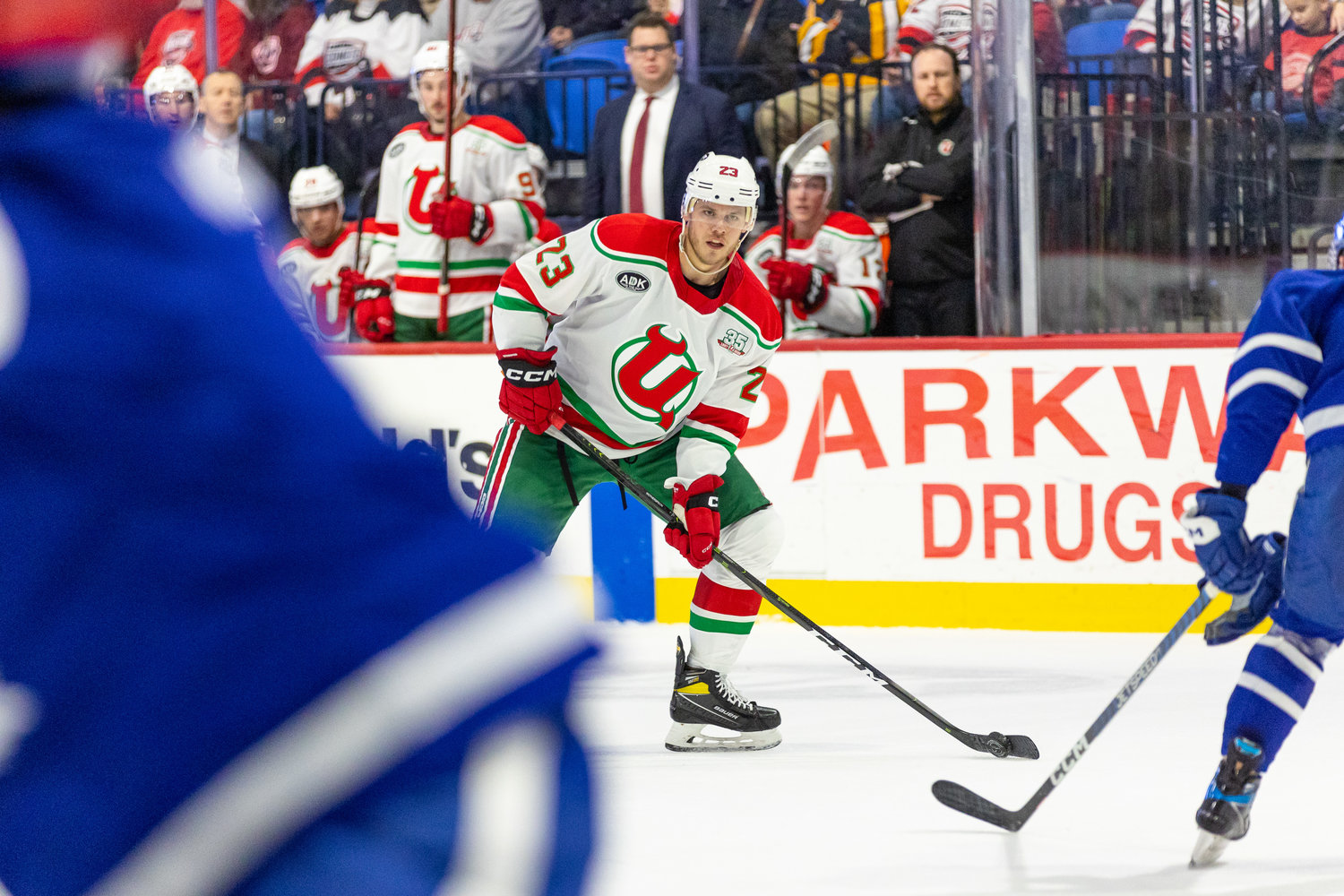 Utica Comets defenseman Tyler Wotherspoon looks to make a play during Friday's game against the Toronto Marlies at the Adirondack Bank Center. Wotherspoon scored his first goal of the season late in the Comets' 4-3 loss.
(Photo courtesy of David Herman / Utica Comets) 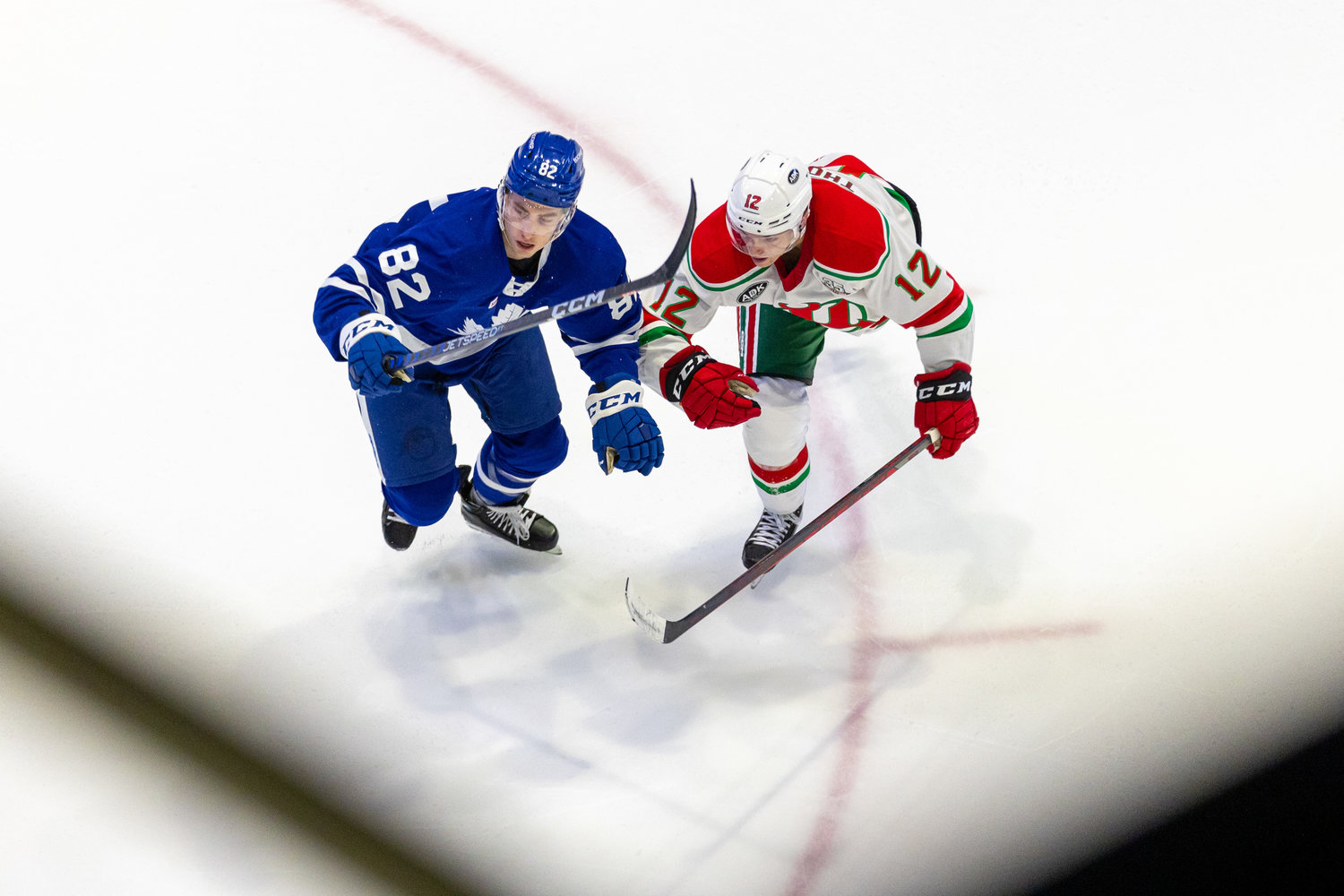 As the Utica Comets near the first-quarter mark of the 2022-23 season, a deficiency in terms of consistency is causing missed opportunities.

Comets coach Kevin Dineen has pointed to the area as being in a work in progress for the squad.

Toronto scored three times in the first period and held off the Comets for a 4-3 victory Friday in the first meeting between the North Division opponents since the end of October.

And, while it was another one-goal game – the seventh consecutive such outcome for the Comets since Nov. 18 – it represents another missed opportunity against a team the Comets are chasing in the seven-team North Division.

“More than anything else I thought it was our puck management. We had opportunities to make plays and that’s been a running issue. It gets back to the basics of hockey with tape-to-tape passes. When you don’t do that, you create opportunities that you give away,” Dineen said.

“It us his sure our execution is sharp in practice and making sure we’re carrying that into a game,” said Dineen before the team boarded the bus for a trip to Belleville on Saturday. “It is understanding your in the thick of a stretch right now that you have to make a statement.”

It is Friday. You know what that means.
Comets taking on those Toronto fellas. pic.twitter.com/KJUUS80Kav

The result snapped a season-best four-game point streak for the Comets (6-7-3-1), whose 16 points earned are least in the North Division.

It is different feeling compared to last season when the team didn't lose their seventh game in regulation until early Feburary.

Utica completed its 17th game of the 22-23 season Friday. The team’s 18th game – and reaching the first-quarter mark of the 72-game schedule – is at 7:05 p.m. Saturday when the team closes the week with its third consecutive Canadian opponent in the Belleville Senators. Utica is three points back of fourth-place Belleville in the North Division.

Dineen said there are players – he didn’t name anyone in particular – that need to “embrace the opportunity that they’re given, whether it is 10 minutes a night or 20 minutes. Whatever it is, they have to take advantage of it.”

Two days after putting up more than 40 shots in an eventual overtime loss to Laval, Utica totaled 22.

Forwards Nick Hutchison gave the Comets an early lead and Nolan Stevens got the team to within a goal after three consecutive goals by Toronto. Tyler Wotherspoon scored his 30th career goal in his 501st AHL game with 10 seconds remaining to give Utica a late glimmer.

It was the second win in five games for Toronto (12-6-1-0), which managed to find ways to breakdown Utica’s defense in the first period.

Noel Hoefenmayer had a three-point game in support of Joseph Woll, who totaled 19 savs.

It all seemed to start off well enough for the Comets with Hutchison’s third goal of the season following a Marlies’ turnover in which the puck popped free to the forward in the slot,. Hutchison was unchecked in the slot when he scored with 12 minutes left.

The Marlies were opportunistic in controlling the rest of the period

Hoefenmayer scored 26 after Hutchison.Then, he put Toronto ahead for good about three minutes later after he got behind a Comets defenseman on the left side and got slick feed from Ryan Chyzowski.

Max Ellis added his first pro goal, putting a slick backhander past Daws following a solid breakout pass from Hoefenmayer with 3:48 left in the period.

After three “ineffective” power plays in the first period, Dineen shuffled his two units. The team responded on the fourth power play with an impressive passing play between Reilly Walsh, Jack Dugan and Stevens, who tipped in the puck for his second goal of the season with about 13 minutes left.

Utica – averaging a third-worst 2.69 goals this season – wasn’t able to muster another goal until 48 seconds after a Toronto empty-netter late in a period when the Comets were outshot.

“We had different pushes,” Dineen said, “but there were sloppy plays that are mixed up there that make the difference in the games right now.”