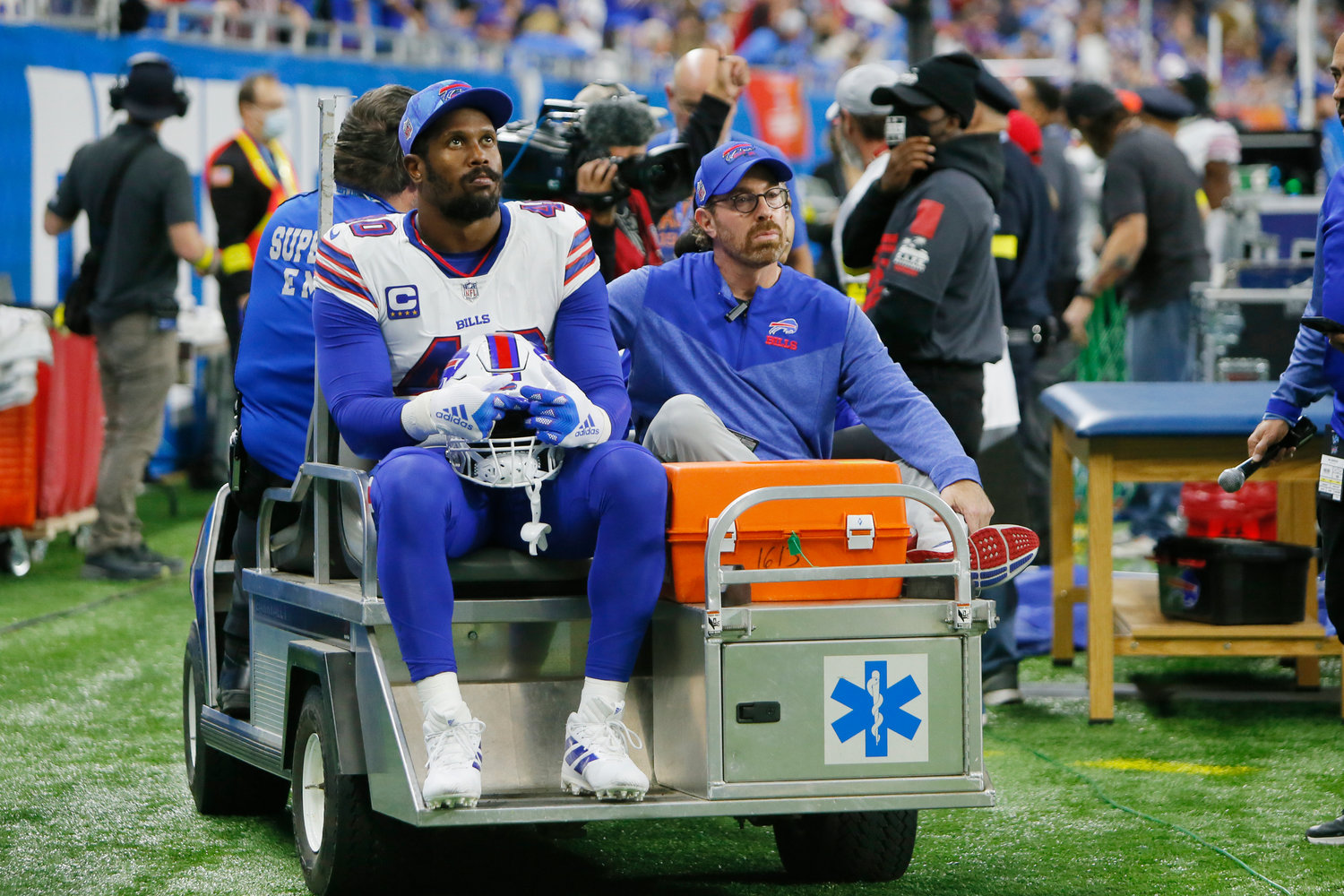 Buffalo Bills linebacker Von Miller is carted off the field during the first half against the Detroit Lions on Thursday afternoon in Detroit.
(AP Photo)
Posted Friday, November 25, 2022 4:50 pm
Associated Press

The person spoke to the AP on condition of anonymity Friday because the team has not provided any updates on Miller’s injury. While the results are encouraging, Miller is still being evaluated and is expected to be out indefinitely, the person said.

Bills coach Sean McDermott is scheduled to speak later in the day. He had no immediate updates on either Miller or starting left tackle Dion Dawkins following Buffalo’s 28-25 win over the Detroit Lions on Thursday. Dawkins did not return after hurting his ankle.

Miller was hurt late in the second quarter. He was pushing his way through the right side of the Lions’ line when his knee bent awkwardly at the same time center Frank Ragnow stepped on Miller’s right ankle.

Miller was able to walk off the field on his own, and he was examined briefly on the sideline before being carted off. The Bills finished the game with just three defensive ends, with Greg Rousseau and A.J. Epenesa not playing due to ankle injuries.

Buffalo (8-3) has won two straight since a two-game skid, and it travels to play New England (6-5) on Thursday. The Bills are scheduled to return to practice on Sunday.

Miller is the NFL’s active leader in sacks with 123 1/2, and he ranks 19th on the career list. He leads Buffalo with eight sacks, which are tied for 10th in the NFL entering this weekend.

The Bills made a major splash by signing the 33-year-old to a six-year contract in March after Miller won his second Super Bowl with the Los Angeles Rams. Miller spent his first 10-plus years in Denver before being traded to Los Angeles.

The injury could be the second significant one for Miller in three years. He missed the entire 2020 season with an ankle injury. Otherwise, he’s proven durable, playing 15 or more games in 10 of his 12 NFL seasons. The injury is to the same knee that forced Miller to miss seven games in 2013.

His injury will further test the depth of a Bills' defense that hasn’t been healthy all season.

The injuries have depleted Buffalo’s secondary in particular. Starting safety Micah Hyde is on injured reserve after hurting his neck in Week 2. And Buffalo finally welcomed back starting cornerback Tre’Davious White on Thursday. He was eased in by playing 16 snaps against the Lions in his first game since tearing a ligament in his left knee a year ago on Thanksgiving.

The strains have shown on defense, which has allowed 300-plus yards offense in each of its past seven games. It’s the worst stretch since an eight-game run in 2017 during Sean McDermott’s first season as coach.

Buffalo has allowed 21 or more first downs in eight straight games, which marks the worst run in franchise history.