After 11 days of witnesses and evidence, the murder trial of Kaitlyn A. Conley reached the end of testimony this afternoon with her defense calling several witnesses to poke holes in the … 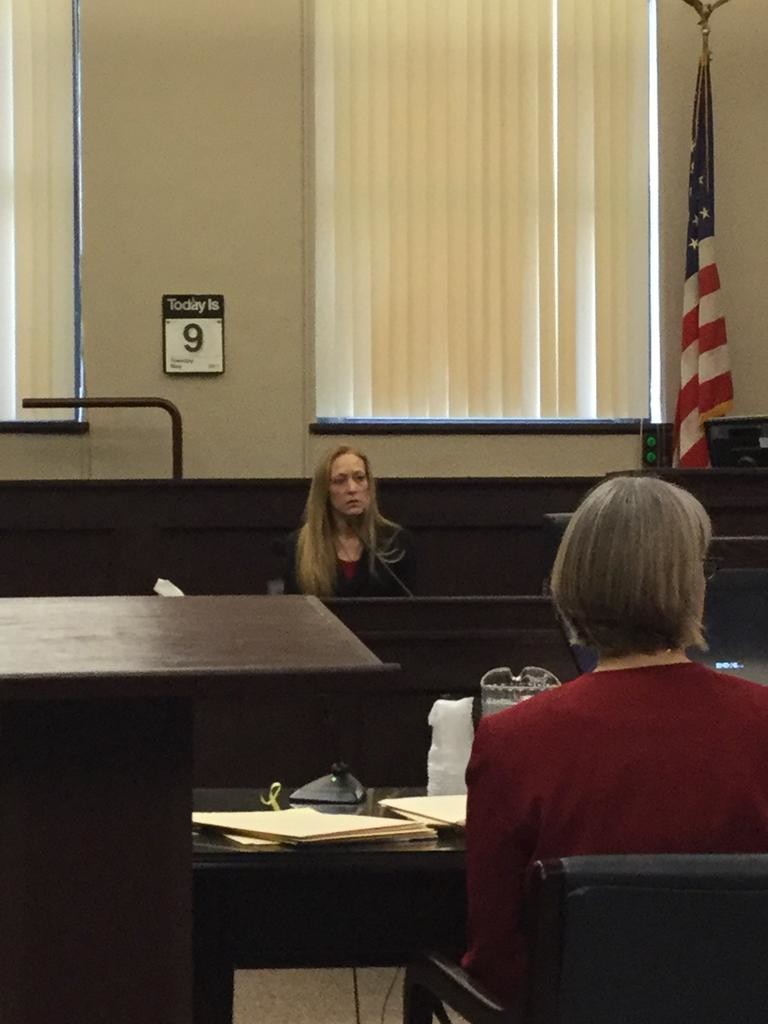 MIDDLE SISTER — Tamaryn Yoder, the middle child of William and Mary Yoder, testified on Tuesday. She was one of the final witnesses for the defense. Closing statements are expected at 9:30 a.m. Thursday.
Posted Wednesday, May 10, 2017 4:13 pm
Sean I. Mills
Staff writer
email • twitter

After 11 days of witnesses and evidence, the murder trial of Kaitlyn A. Conley reached the end of testimony this afternoon with her defense calling several witnesses to poke holes in the prosecution's accusations.

The jury of seven women and five men is expected to begin deliberations Thursday afternoon, after both sides give their closing statements.

Conley, 24, of Sauquoit, is accused of poisoning her boss, Dr. Mary L. Yoder, with the deadly toxin colchicine on July 20, 2015. Conley worked as the receptionist at Chiropractic Family Care in Whitesboro, which Yoder ran with her husband, William.

Conley and her defense attorney, Christopher Pelli, are arguing that William Yoder is the killer, and that he poisoned his wife while having an affair with his wife's sister, Kathleen Richmond.

"I felt a little uncomfortable because they were together and it was pretty intense," Keating described for the jury. She said she was out for a walk with her daughter, and she remembers the exact week because that was when her daughter got a new doctor.

"He was kissing her and looking in her eyes, and it was very intense," Keating told the jury. She was then able to identify William Yoder in the courtroom as the man she saw kissing Richmond.

Sandra Taylor worked as the receptionist at Chiropractic Family Care before Conley, for about 25 years, she said. Taylor was the final witness in the three-week trial, and she testified that William Yoder was known to use both the front office computer and the nearby electric typewriter.

Prosecution witnesses have testified that evidence against Conley was found on both the front office computer and the typewriter.

Taylor told the jury that William Yoder would sometimes come into the office on his days off to do work in private, and that he would come in through the back door.

"He just wanted to do paperwork and leave," Taylor told the jury, meaning Yoder did not want to be bothered by patients.

The defense is arguing that William Yoder had access to the office on his days off and could have come in through the back door without anybody knowing on July 20, 2015.

David King, the nephew of Mary Yoder, took the stand Wednesday morning to testify about the time he lived with his cousin, Adam Yoder, the son of victim Mary Yoder. King said they lived together in Utica and Frankfort after Mary Yoder died, until Adam abruptly moved out and left his property behind in December 2015.

King testified that Adam Yoder left behind several supplement pills, as well as some documents that contained computer IP addresses and remote desktop access applications. King admitted that he did not know where or when the documents came from, but he recognized Adam Yoder's handwriting.

Another defense witness, Janine King, one of Mary Yoder's sisters, testified that she did not believe law enforcement's theory that Kaitlyn Conley would have acted alone.

"They really didn't want to hear anything that I might have offered at that time," King told the jury.

Another sister, Sharon Mills, testified that she was the first person to notify the Sheriff's Office about Mary Yoder's suspicious death. She telephoned investigators on Oct. 15, 2015, and a case was opened.

Mills told the jury that the investigators seemed focused on William Yoder as a suspect and would not hear any of her other theories.

"I just said that if he did it, you're not going to catch him," Mills said she told the investigators. She said she believes William Yoder killed her sister Mary and is too "brilliant" to be caught.

"It made no sense that Katie would do this," Mills testified.

Conley is charged with one count each of second-degree murder and second-degree forgery, as well as two counts each of first-degree falsifying business records and petty larceny. She faces a maximum of 25 years to life in prison if convicted.