Sitting in his red chair just under a tree for shade, Gerald Griech on a mild afternoon watched traffic and the comings and goings along Main Street in Jamestown. 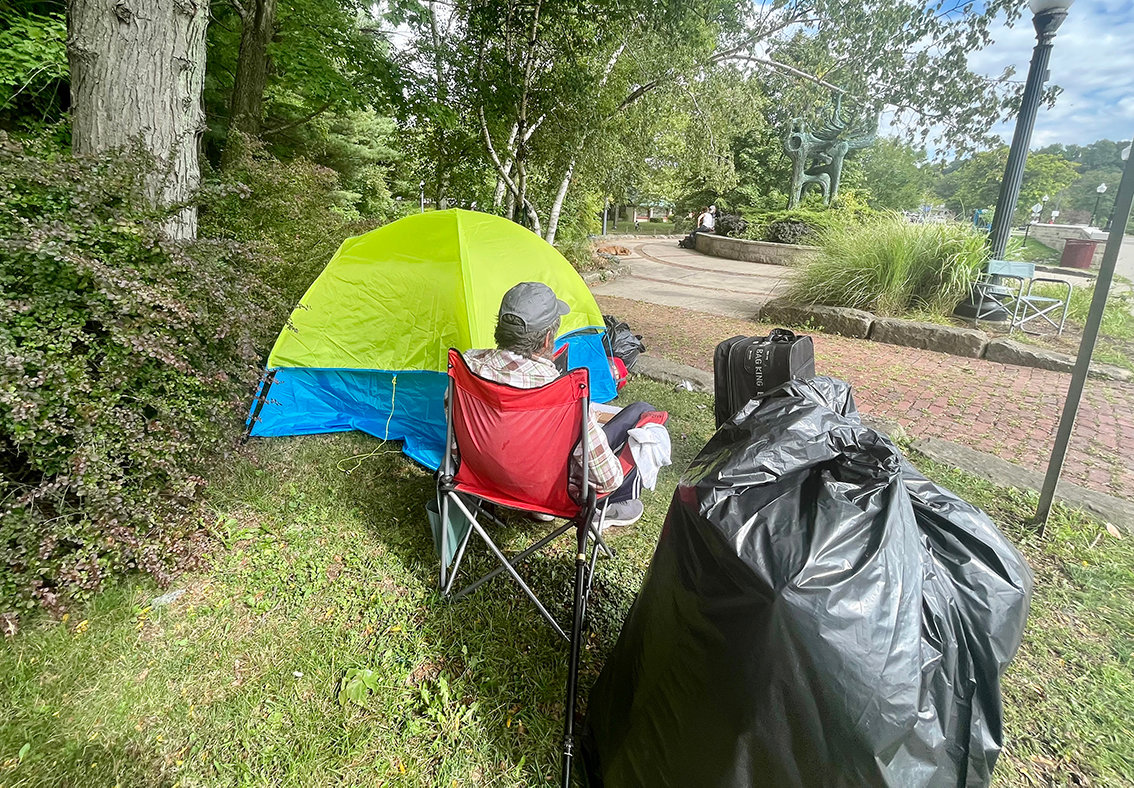 Gerald Griech, who wished not to have his face shown, is pictured along Main Street near the Chadakoin River in Jamestown.
(P-J photo by Eric Tichy)
Posted Saturday, August 27, 2022 10:00 pm
Eric Tichy, The Jamestown Post-Journal

JAMESTOWN — Sitting in his red chair just under a tree for shade, Gerald Griech on a mild afternoon watched traffic and the comings and goings along Main Street in Jamestown.

Since May 27, the 62-year-old said he’s been living in an area next to the Chadakoin River. With him is a yellow and blue colored tent that, on Tuesday, he placed just off the sidewalk that easily made it stand out to motorists passing by.

Though Griech notes he has only a handful of possessions these days, it’s still too much to simply carry to the nearby St. Susan soup kitchen for a meal. The possibility that something might be taken if he leaves it is an ever-present thought, he told The Post-Journal in an interview this week.

“I can’t make it to the food bank or where they serve the food,” he said. “I can’t drag this (stuff) over there.”

Griech is among a handful of individuals who congregate near the river and take refuge under the nearby railroad viaduct.

Jamestown Mayor Eddie Sundquist said he’s aware of the group and has gone out and talked to some of the individuals.

“First things first, these are human beings and they’ve found their way here,” said Sundquist, who alluded to a “perfect storm” that caused some to become homeless due to financial strains and the fact that eviction cases are again being heard in courts.

“I’ve been out there personally,” said the mayor, who invites members of the Jamestown City Council to go out and speak with the individuals.

‘NOWHERE ELSE TO GO’

A native of Elk County in Pennsylvania, Griech said his battle with homelessness began in August of last year after losing his home “to taxes.” In the process, he lost many of his possessions.

“All my life’s (stuff) is gone,” he said. “It was in the house and they took it and locked me out. It sucked, you know.”
Asked what he did for shelter, he said, “Bouncing from cellar to cellar, wherever I found.”

This spring, he found his way to a facility in Warren County before later being referred to the UCAN City Mission — an emergency rescue shelter for men on West First Street in Jamestown. He stayed there for more than a month before leaving toward the end of May.

Griech said he worked in the logging industry for 30 years and also construction. He said a work injury left him with constant pain in his back and on disability. The money he receives on disability does not afford him a place to live and food to eat.

“Since May 27, I’ve been sleeping right down there (by the Chadakoin River),” he said. “I have nowhere else to go. ... My back hurts constantly — I can’t get prescriptions refilled.”

Griech said he is thankful for those who have stopped and provided assistance, most recently in the form of two bags full of clothes. He said members of a local church come around with food once a week; there’s one man in particular, he said, who has been especially helpful and kind.

The U.S. Department of Housing and Urban Development in February released its 2021 annual Homeless Assessment Report Part 1 to Congress. The report found that more than 326,000 people experienced sheltered homelessness in the United States on a single night in 2021, a decrease of 8% from 2020.

According to HUD, “sheltered homelessness” refers to people experiencing homelessness who were found in emergency shelters, transitional housing, or other temporary settings.

In response to the COVID-19 pandemic, HUD waived the requirement for communities to conduct the count of unsheltered homelessness in 2021.

Local organizations that are part of the Chautauqua County Homeless Coalition were expected to discuss the current homelessness situation in early September.

Concerns over what appears to be a growing homeless population have come before the City Council this year. Sundquist said city officials have had discussions internally as well. He said addressing the problem requires teamwork with local, state and federal partners.

“It’s a really tough spot,” Sundquist said. “I can go out there, and our crews and police can go to move the folks all the time. Where do you go next? Where do they go then? There are a lot of challenges, but we have to provide resources.”

Jeff Rotunda, executive director of the UCAN City Mission, said the organization continues to assist those who seek emergency shelter while also providing a range of services including life skills training through multi-disciplinary programs.

“We’re continuing to work, not just within our own agency, but work together to try to address these immediate needs,” he said.