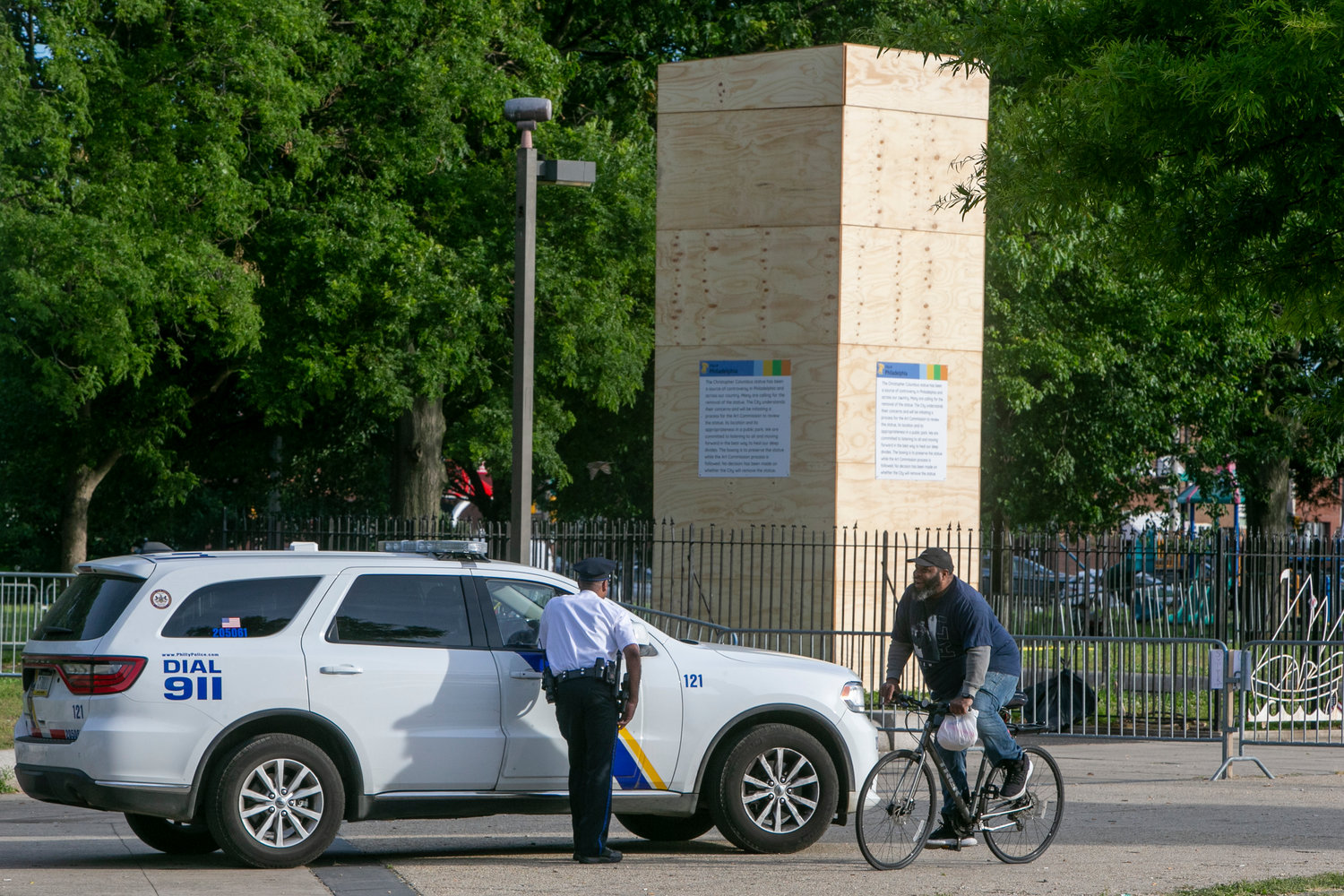 FILE - This June 17, 2020 file photo shows Philadelphia police at Marconi Plaza near the Columbus statue in Philadelphia. Monday, Oct. 11, 2021 federal holiday dedicated to Christopher Columbus continues to divide those who view the explorer as a representative of Italian Americans‚Äô history and those horrified by an annual tribute that ignores the native people whose lives and culture were forever changed by colonialism. (Alejandro A. Alvarez/The Philadelphia Inquirer via AP, File)
AP 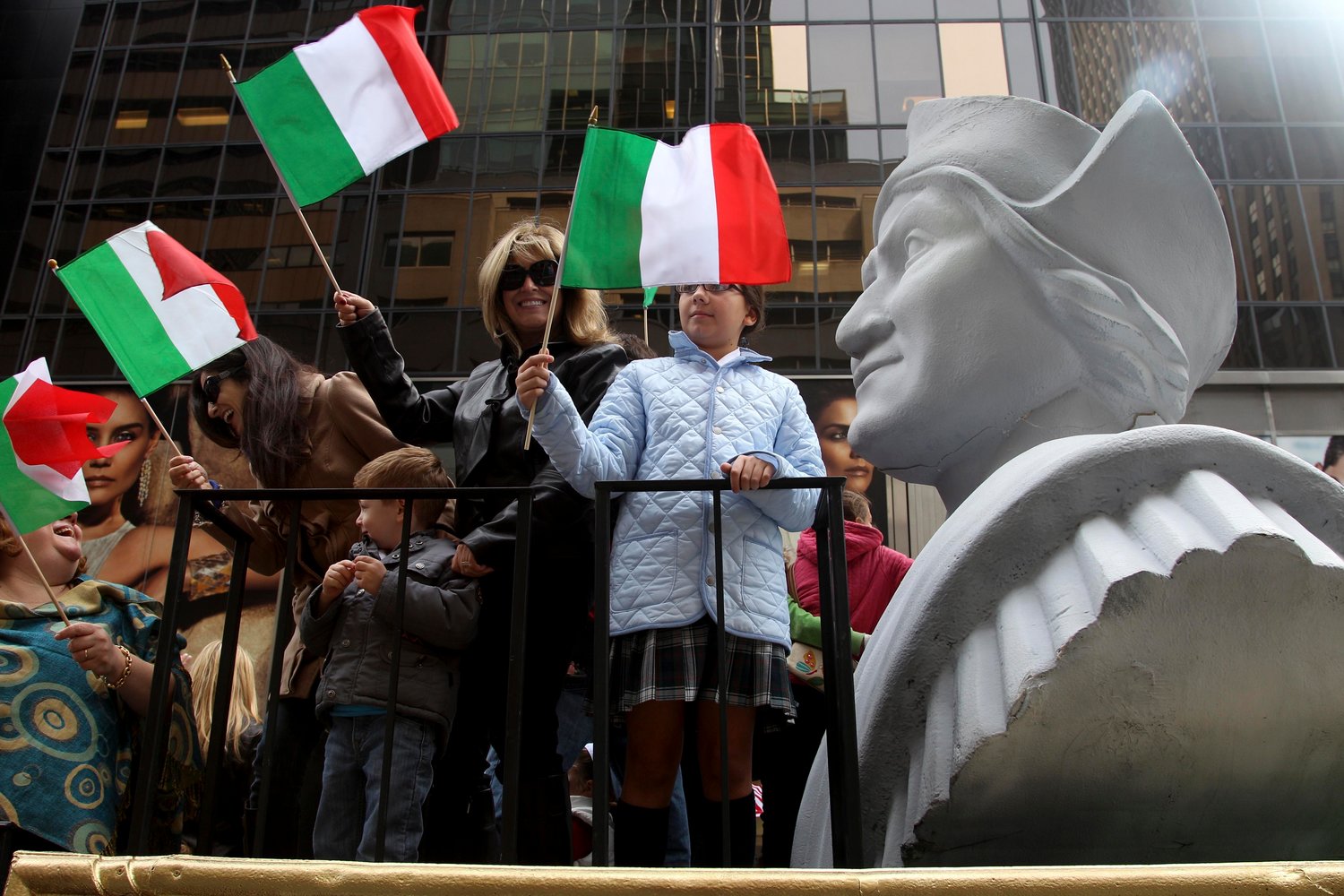 FILE - In this Oct. 8, 2012 file photo, people ride on a float with a large bust of Christopher Columbus during the Columbus Day parade in New York. Monday, Oct. 11, 2021 federal holiday dedicated to Christopher Columbus continues to divide those who view the explorer as a representative of Italian Americans‚Äô history and those horrified by an annual tribute that ignores the native people whose lives and culture were forever changed by colonialism.(AP Photo/Seth Wenig, File)
AP
Previous Next
Posted Monday, October 11, 2021 9:45 pm
Associated Press By KATHLEEN FOODY and WILSON RING (AP)

WASHINGTON (AP) — Monday’s federal holiday dedicated to Christopher Columbus is highlighting the ongoing divide between those who view the explorer as a representative of Italian American history and others horrified by an annual tribute that ignores native people whose lives and culture were forever changed by colonialism.

Spurred by national calls for racial equity, communities across the U.S. took a deeper look at Columbus’ legacy in recent years — pairing or replacing it with Indigenous Peoples Day.

On Friday, President Joe Biden issued the first presidential proclamation of “Indigenous Peoples’ Day,” the most significant boost yet to efforts to refocus the federal holiday celebrating Columbus.

But activists, including members of Native American tribes, said ending the formal holiday in Columbus’ name has been stymied by politicians and organizations focusing on Italian American heritage.

“The opposition has tried to paint Columbus as a benevolent man, similar to how white supremacists have painted Robert E. Lee,” Les Begay, Diné Nation member and co-founder of the Indigenous Peoples’ Day Coalition of Illinois, said, referring to the Civil War general who led the Confederate Army.

Columbus’ arrival began centuries of exploration and colonization by European nations, bringing violence, disease and other suffering to native people already living in the Western Hemisphere.

“Not honoring Indigenous peoples on this day just continues to erase our history, our contributions and the fact that we were the first inhabitants of this country,” Begay said.

Across the country tension, over the two holidays has been playing out since the early 1990s. Debates over monuments and statues of the Italian explorer tread similar ground, as in Philadelphia where the city placed a box over a Columbus statue last year in the wake of the murder of George Floyd, a Black man, by a white Minneapolis police officer. Protesters opposing racial injustice and police brutality against people of color rallied for months in summer 2020.

Philadelphia lawyer George Bochetto, who has been fighting Democratic Mayor Jim Kenney’s administration to uncover the statue, said Saturday many felt efforts to remove it were an attack on Italian-American heritage.

“We have a mayor that’s doing everything he can to attack the Italian American community, including canceling its parade, removing statues, changing the Columbus Day holiday to Indigenous Peoples Day by fiat,” Bochetto said.

Kenney spokesperson Kevin Lessard said the statue should remain boxed up “in the best interest and public safety of all Philadelphians.”

In 2016, Lincoln, Nebraska, joined other cities adding Indigenous Peoples’ Day to the calendar on the same date as Columbus Day. Events on Monday will focus on the newer addition, including unveiling a statue honoring the first Native American physician, Dr. Susan La Flesche Picotte.

Some feel a split day causes further harm. Activists plan a small protest outside the Robert V. Denney Federal Building, calling for an outright end to the holiday in Columbus’ name at all levels of government.

“It’s patently absurd to honor Indigenous people and the man who tortured and murdered their ancestors,” said Jackson Meredith, an organizer. “As far as we’re concerned, we’re going to keep protesting it until Columbus Day is abolished.”

In New York City, the annual Columbus Day Parade returns after a one-year, in-person absence attributed to the coronavirus pandemic. The parade is touted by some as the world’s largest Columbus Day celebration.

“We have to honor that day as a day to recognize the contributions of all Italian Americans, so of course the day should not have been changed arbitrarily,” de Blasio said.

Chicago’s annual Columbus Day parade also returns Monday after the pandemic forced 2020’s cancellation of the event that draws 20,000 people. It’s a vivid reminder of the ongoing fight over three statues of Columbus, still warehoused by the city after protesters targeted them in summer 2020.

She later created a committee to review monuments in the city, including the fate of Columbus monuments. No plans have been announced publicly, but the Joint Civic Committee of Italian Americans that plans the Columbus Day parade this summer sued the city’s park district, demanding that one be restored.

Ron Onesti, the organization’s president, said the parade usually draws protesters and expects that on Monday too. He sees the holiday, parade and statues as a celebration of Italian Americans’ contributions to the U.S., not just Columbus.

“The outcome I’m looking for is (for) our traditions to be respected and conversations to continue,” Onesti said Saturday. “Every plaque that goes along with a statue says it recognizes the Italian community’s contributions. So people need to understand that’s why it’s there, and then let’s sit down and figure out where to go from here.”

Illinois in 2017 designated the last Monday in September as Indigenous Peoples Day but kept Columbus Day on the second Monday of October. A proposal to replace Columbus Day filed this year hasn’t received any action.

Begay, the Indigenous Peoples Day advocate, said the organization decided to focus on changing Columbus Day first in Cook County, hoping it would be an easier path than convincing state or Chicago officials. But so far, members of the county’s board haven’t lined up behind the proposal.

“Why are 500 plus years still forgotten?” Begay said. “Why don’t we have this single day to recognize these horrible atrocities committed against native people?”