The white gunman who police say killed 10 Black people at a Buffalo supermarket pleaded not guilty Thursday to hate-motivated domestic terrorism and other charges. 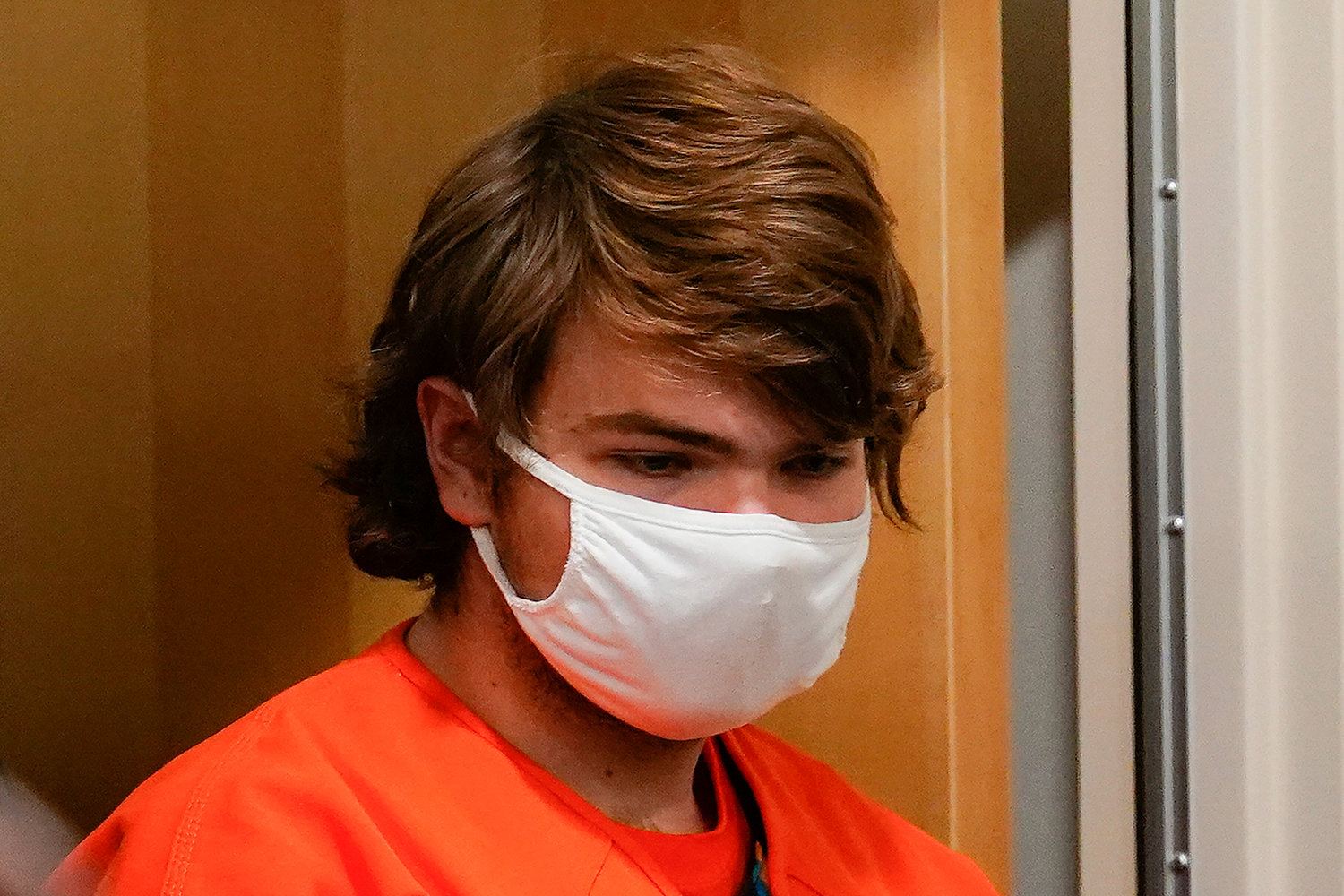 Payton Gendron is led into the courtroom for a hearing at Erie County Court, in Buffalo, Thursday. Gendron faces charges in the May 14, fatal shooting at a supermarket.
(AP Photo/Matt Rourke) 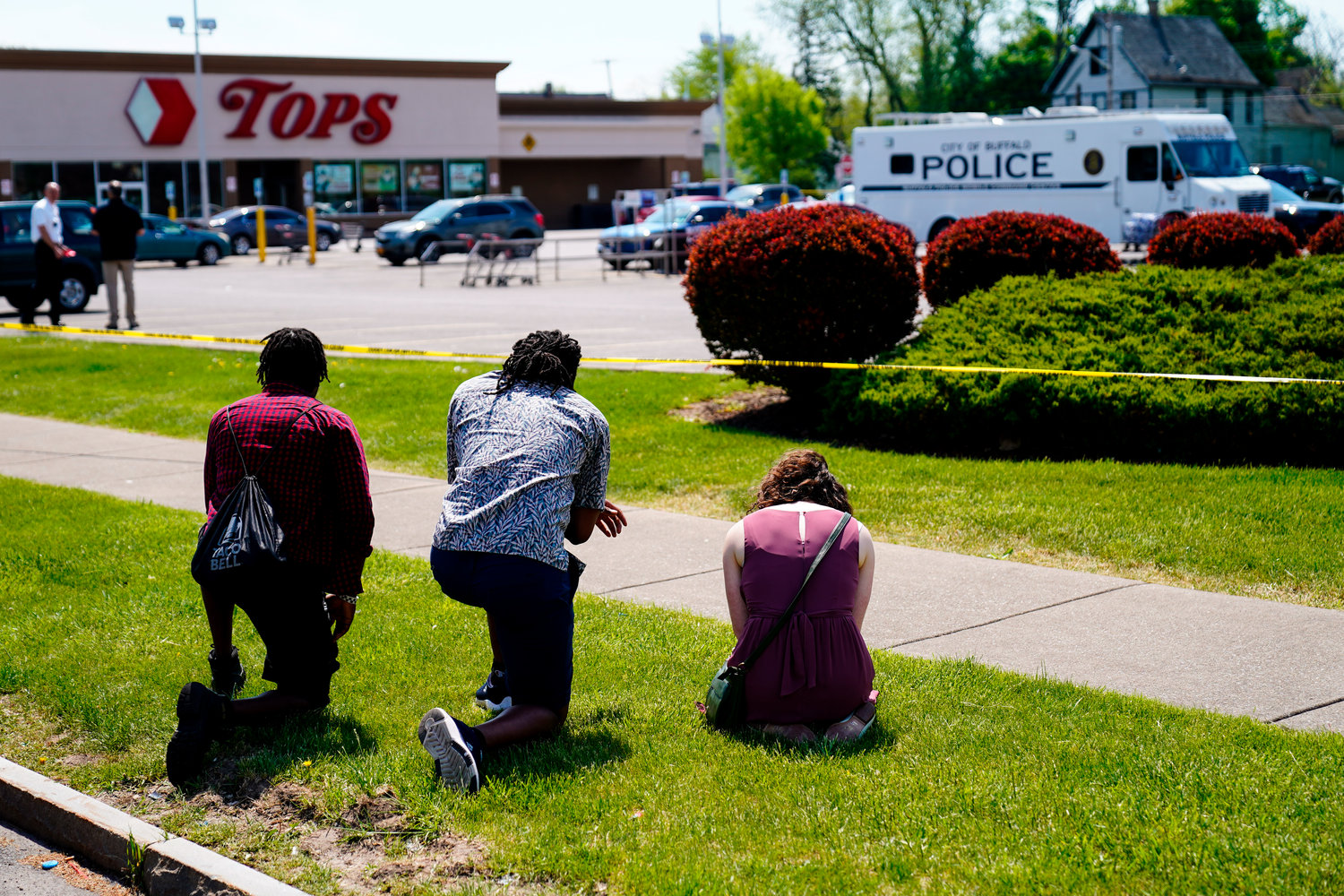 People pray outside the scene of a shooting where police are responding at a supermarket, in Buffalo, earlier this month.
(AP Photo/Matt Rourke, File)
Previous Next
Posted Friday, June 3, 2022 2:59 pm
Associated Press

BUFFALO  — The white gunman who police say killed 10 Black people at a Buffalo supermarket pleaded not guilty Thursday to hate-motivated domestic terrorism and other charges. A prosecutor called the evidence against him overwhelming.

A lawyer entered the plea for Payton Gendron, 18, in the first case to make use of New York’s domestic terrorism hate crime law. Gendron didn’t speak during the brief hearing with a heavy security presence.

Witnesses, police and Gendron’s own writings and livestreamed video have incriminated him as the gunman who used an AR-style semi-automatic rifle May 14 to target shoppers and employees of a Tops Friendly Market, and he surrendered at the crime scene after putting his rifle to his neck. Authorities said he chose the store because of its location in a predominantly Black neighborhood.

“There is overwhelming proof of the defendant’s guilt,” Assistant District Attorney John Fereleto said. “The defendant was caught at the scene of the crime with the weapon in his hands.”

Gendron has been held without bail since the shooting and is due back in court July 7.

“When you hear the phase ‘throw the book at’ someone, well, in this case right here, the defendant just got ‘War and Peace,’” District Attorney John Flynn said at a news conference after the arraignment.

The domestic terrorism hate crime charge — officially, domestic acts of terrorism motivated by hate in the first degree — was added to state law just two years ago, after a mass shooting targeting Mexicans at a Walmart store in El Paso, Texas. The offense carries an automatic life sentence upon conviction.

In Gendron’s case, the charge accuses him of killing at least five people “because of the perceived race and/or color” of his victims.

Outside court, Buffalo Mayor Byron Brown called Gendron “a racist, hate-filled outsider who came to our community with the stated intent to kill as many Black people as possible.”

Prosecutors said Gendron drove about three hours to Buffalo from his home in Conklin, New York, to target African Americans. Shortly before opening fire, he posted documents that outlined his white supremacist views and revealed he had been planning the attack for months.

Federal authorities also are investigating the possibility of hate crime charges against Gendron.

The slain victims ranged in age from 32 to 86. Three other people were wounded.

The bloodshed, followed 10 days later by a mass shooting that killed 19 children and two teachers inside an elementary school in Uvalde, Texas, has renewed a national debate about gun control.

Meanwhile, a 911 dispatcher was fired Thursday after being accused by a Tops employee of hanging up on her during the rampage. The dispatcher, who was put on administrative leave two days after the shooting, was terminated after a disciplinary hearing Thursday, Erie County spokesperson Daniel Meyer said.

County Executive Marc Poloncarz last month called the handling of the 911 call “completely unacceptable” and said the county would seek to fire the employee.

The dispatcher’s union, the Civil Service Employees Association, said Thursday it had ensured that disciplinary due process provisions were “followed fairly and appropriately here.” The dispatcher told The Buffalo News late last month she was sorry about what the caller went through during the shooting, adding that more facts would come out at the hearing. A message was left Thursday at a possible phone number for her.