Syracuse routs UConn to improve to 2-0

Syracuse routs UConn to improve to 2-0 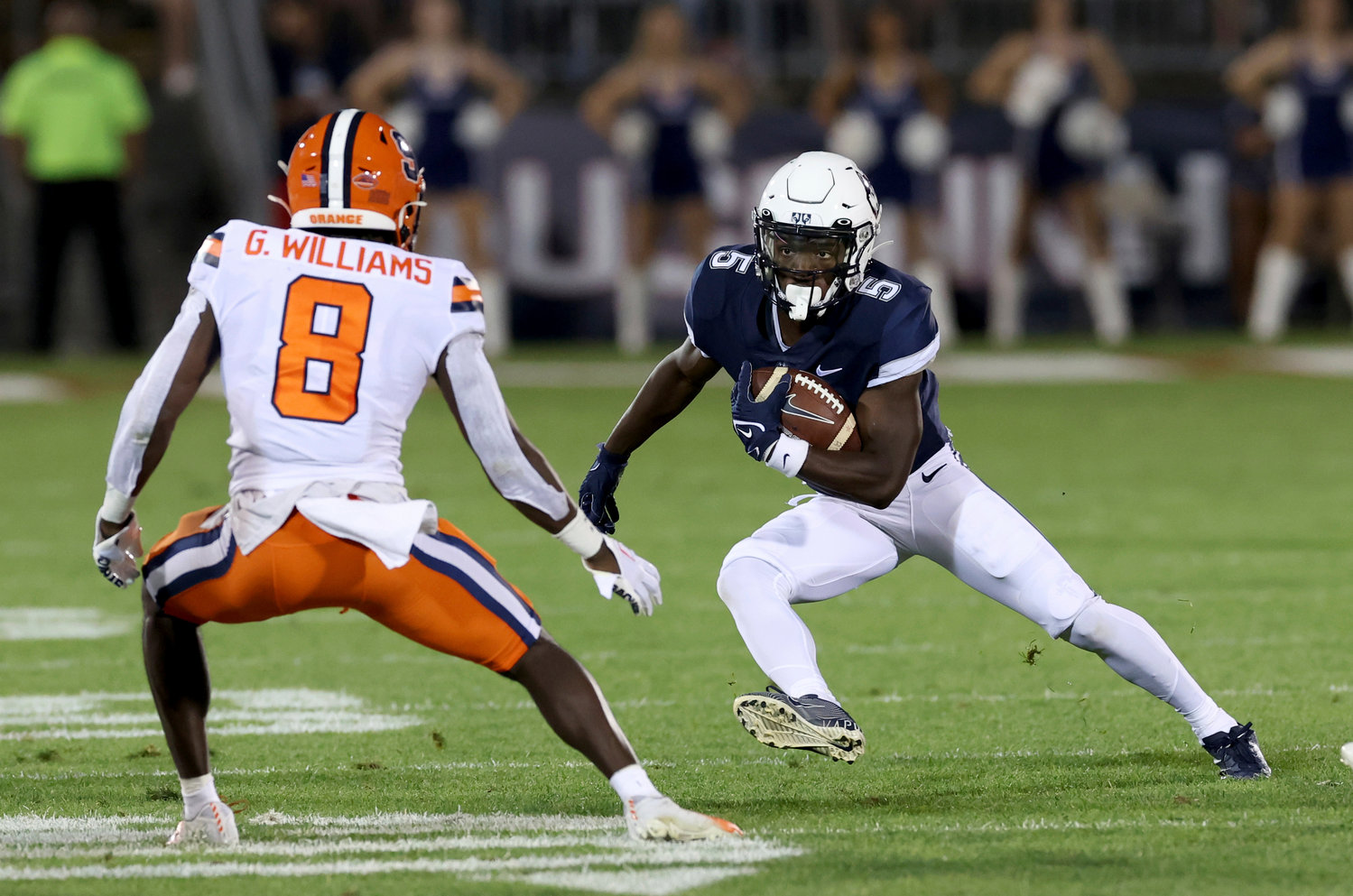 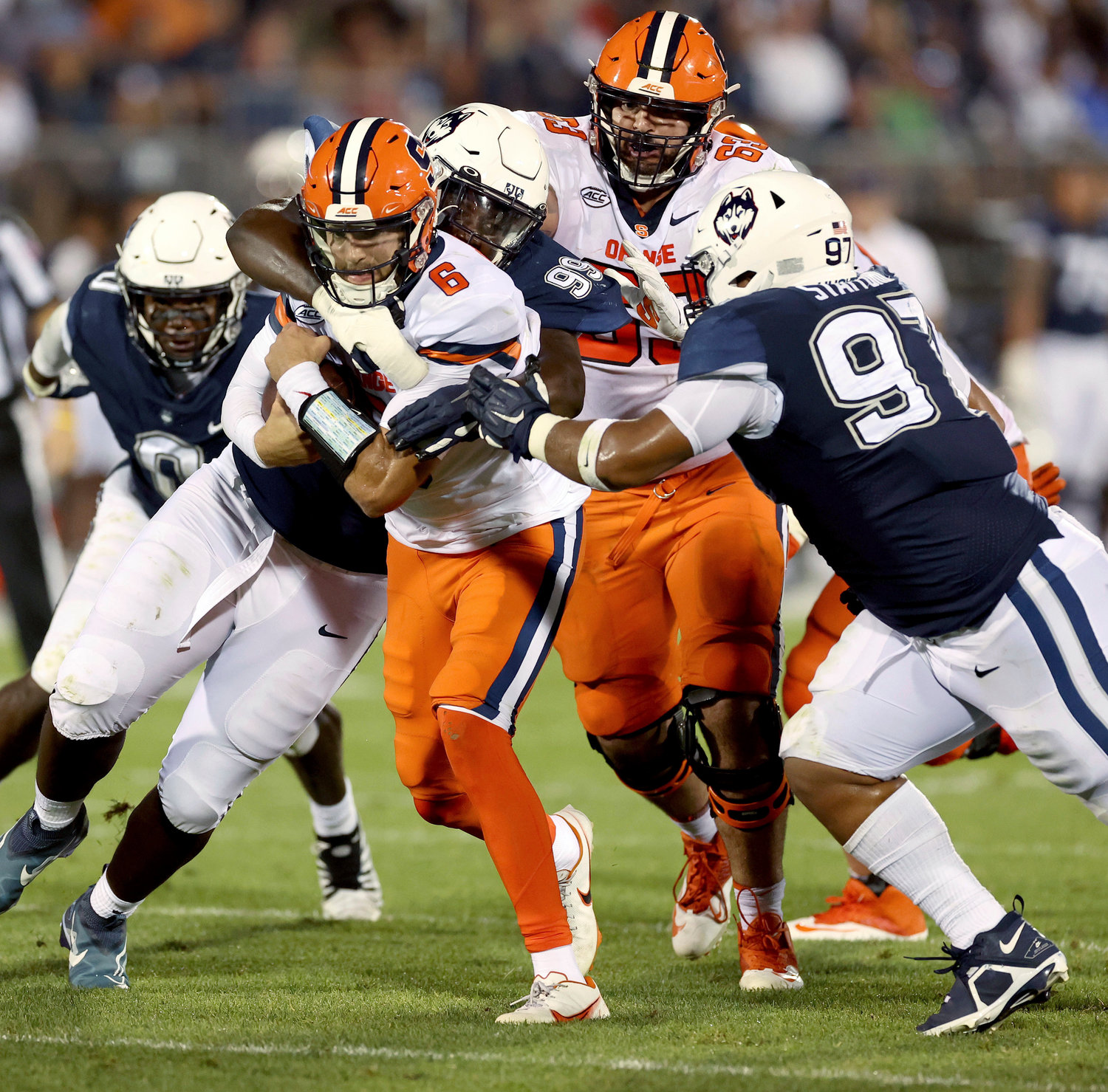 Syracuse quarterback Garrett Shrader is tackled during a non-league game against Connecticut on Saturday night in East Hartford, Conn. The Orange rolled to a 48-14 win.
(Dennis Nett/The Post-Standard via AP)
Previous Next
Posted Tuesday, September 13, 2022 1:03 am
Associated Press

Sean Tucker added 112 yards rushing on 27 carries with touchdown for the Orange, who scored on their first seven possessions.

“I think right now they’ve given themselves an opportunity to be something,” coach Dino Babers said of his team. ”They don’t know what that something is yet. But right now they don’t have a blemish on their record.”

Syracuse never trailed and scored on all five of its first-half drives, highlighted by a 47-yard strike from Shrader to Damien Alford which put the Orange up 17-0 and an 18-yard TD pass to Courtney Jackson just before halftime that made it 27-7.

“I wanted to throw the ball more, especially going into the second half,” Shrader said. “I like our group, we’re doing a lot of good things. I’ve got to give a lot of credit to the O-line holding up. (UConn) hit home on a couple stunts, but we’re trending the right way.”

The Huskies scored on two big plays, a 28-yard second-quarter touchdown run by Devontae Houston and a 56-yard catch-and-run by receiver Aaron Turner in the third quarter.

“It’s hard to stand up here after a game like that and say you’re proud of anything,” UConn coach Jim Mora said. “I’m not proud of myself, because I didn’t do a good enough job getting these guys ready and it always starts with me. But we fought.”

UConn: The Huskies, who went 1-11 a year ago, have not beaten a Power Five team since a victory over Virginia in 2016. The Huskies last won back-to-back games in 2017 and UConn’s last win over Syracuse was a 28-21 decision at Rentschler Field in 2011.

Syracuse: Syracuse tied the all-time series with UConn and 6-6, but has won the last four games by a combined score of 170-69. The Orange, who went 2-3 away from home in 2021, don’t have another road game this season until Oct. 22 at Clemson.

PLAY OF THE GAME

Syracuse linebacker Marlowe Wax put a huge hit on UConn quarterback Zion Turner on the Huskies opening drive of the second half, forcing a fumble which Wax recovered, and ran into the end zone. The return was called back, but Sean Tucker scored six plays later to put Syracuse up 34-7. “It was a good good blitz and seeing it open, I just went for it and made a play,” Wax said. ”I wish it would have been a touchdown. But it’s all good. We got the ‘W.’”

GETTING A KICK OUT OF IT

“He’s gone back to his old way of training, his old way of doing everything back to his freshman year,” Babers said. “I told Andre, ‘You got to get back to what got you here and he’s gone all the way back to the roots.’ And I just like everything about him right now. I think he’s going to have an amazing year.”

UConn: Travels to Ann Arbor to face No. 4 Michigan next Saturday

Syracuse: The Orange return home to host Purdue on Saturday at noon.