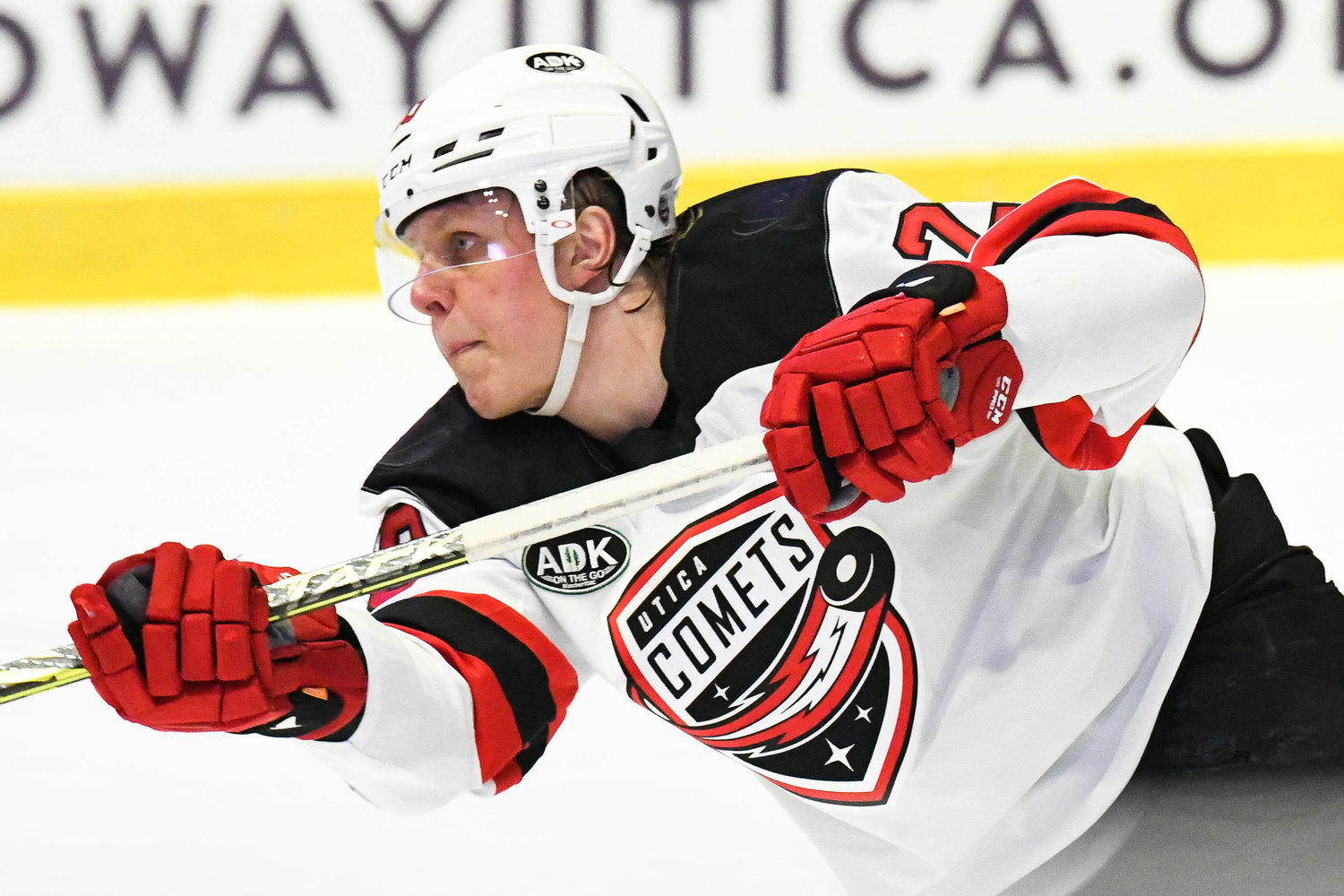 MAKING HIS MARK — Forward Fabian Zetterlund has a had a breakout season with the Utica Comets.
(Sentinel photo by Alex Cooper) 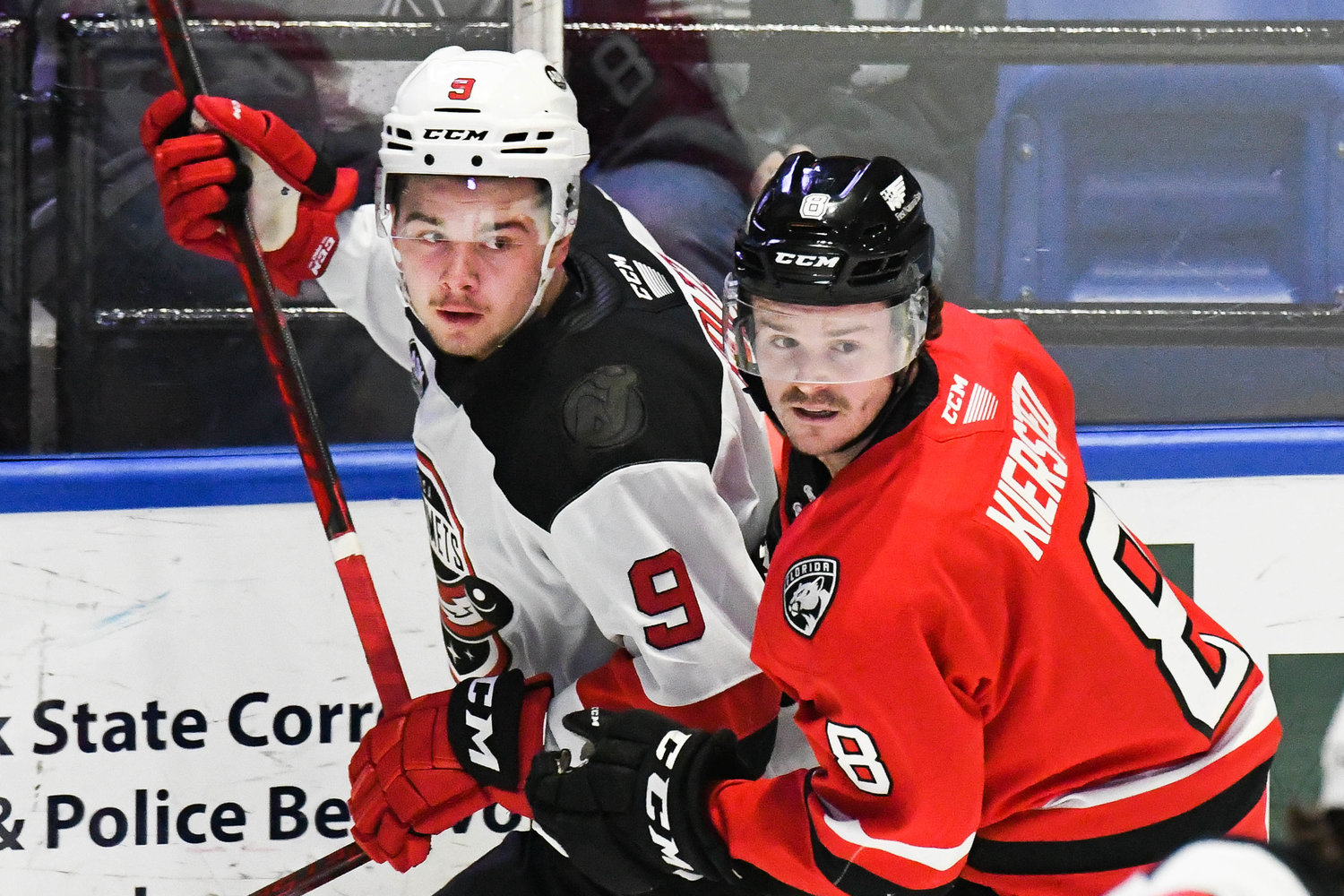 UTICA — Alexander Holtz and Fabian Zetterlund recently went in search of some sun chairs to enjoy the nicer weather.

The two Swedish forwards on the Utica Comets’ roster might have found better purchases instead.

“When we went in (to the store), we didn’t get any chairs,” Holtz said. “We bought an indoor grill and an air fryer instead.”

Helped by their shared Swedish backgrounds, the 20-year-old Holtz and the 22-year-old Zetterlund became roommates and have developed a close friendship while playing for the Comets this season.

“We like to cook,” Zetterlund said. “We put chicken or steak on the indoor grill. It makes it more fun.”

The two New Jersey Devils prospects – who hail from different areas of Sweden – started to get to know each other last year when Holtz began his career in North America. Sharing the same language helped the pair click as they have adjusted to playing in the organization.

“We like to have to have fun. That’s the biggest thing,” Holtz said. “We have a lot of laughs all the time.”

Said Zetterlund: “We hang out every day. The closer you get, the more best friends you become.”

In addition to cooking, the pair also find time to fit in video games. NHL and FIFA are the popular choices.

“It is a different experience, of course. It is the first time where I’ve gotten away from home,” Holtz said. “I think it was good for me to get outside of my comfort zone.”

Zetterlund, who started his North American career in 2019, said he tries to help when he can.

“I know how everything works. I’m used to it,” said Zetterlund, a Devils’ third-round pick in 2017 who made his NHL debut earlier this season. “Everything is new for him and I try to help.”

The experience has been made easier with the pair living with former hockey player Shawn Weiman and his family in Rome. Holtz and Zetterlund, who have space in the Weimans’ guest house, have developed a good friendship with Weimans’ three younger kids. There’s been the occasional pond hockey session as well as games of Uno and Connect Four in the house.

“They help all the time and it feels a little bit more like home. They’re almost like an extra family for you. It is nice to have. It is a benefit for both of us,” Holtz said. “(Shawn) has helped us a lot. I think he’s a huge part of our success this year, too.”

Both Holtz and Zetterlund – who have shown a willingness to be outgoing and their easygoing attitudes during through the season – have found success with Utica.

Each have carved out key roles with the team and have been among the Comets’ offensive leaders thoughout the team’s impressive season that has kept them at the top of the North Division.

Holtz has shown off the skill, talent and hockey IQ that helped make him New Jersey’s seventh overall pick in the 2020 NHL draft. He’s been among the top AHL rookies this season.

“We try to push each other every and make ourselves better. Even after practice, we like to shoot pucks and pass to each other,” Zetterlund said.

“He’s a very skilled player,” Holtz said. “He has a really good shot. He can beat you in many different ways. That is his strongest trait.”

Developing their friendship has helped Holtz and Zetterlund, Comets coach Kevin Dineen said. He said he jokingly refers to the pair as the “Swedish meatballs.”

“More than anything – you can talk about their nationality – I think our young group in general is infectious. It makes it fun to come to work,” Dineen said. “That enthusiasm goes a long way in the locker room and in games.”

Holtz said Zetterlund is a funny person. They both like to crack jokes around the team.

“We don’t have the perfect English and it sounds funny when we try to translate (jokes) sometimes,” Holtz said.