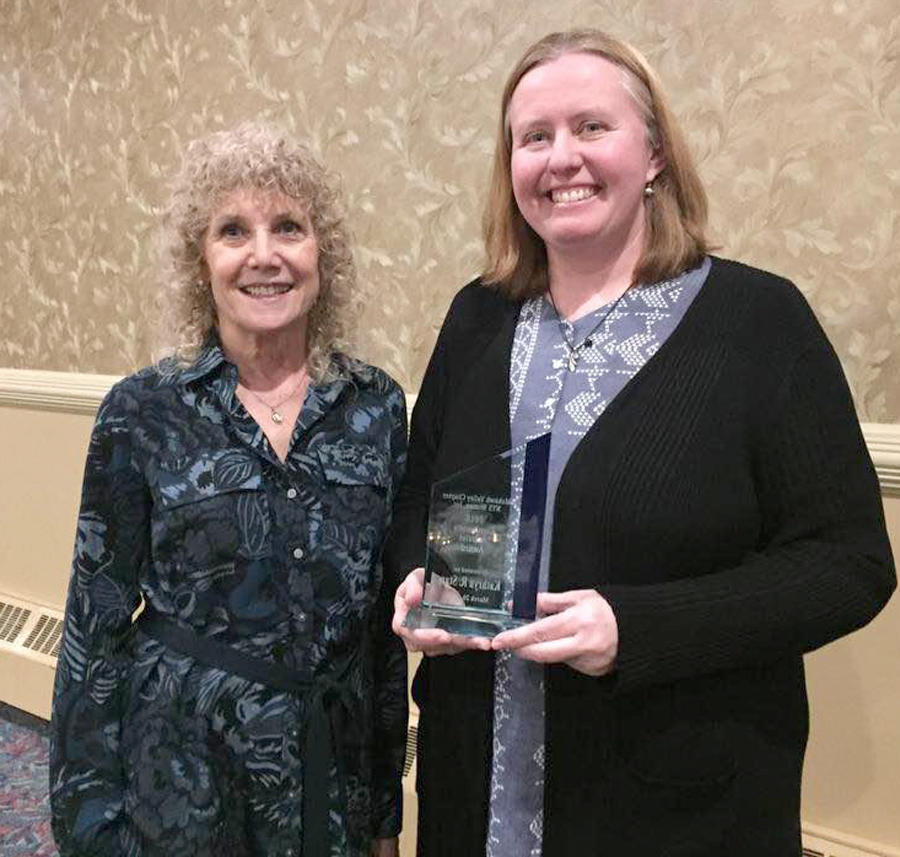 UTICA – A member of SUNY Polytechnic Institute’s faculty is among those recognized in the Mohawk Valley with the prestigious title of “Woman of the Year.” Celebrating outstanding women in the community during the month of March in conjunction with Women’s History Month, Dr. Kathryn Stam, a professor of anthropology, was honored with other community members by the Mohawk Valley Chapter of New York State Women, Inc. at the “Women of the Year” awards dinner on March 20.

“We are very proud of Dr. Stam, whose well-deserved recognition shines a spotlight on her dedication to students, education, and her community,” said SUNY Poly Interim President Dr. Bahgat Sammakia. “Whether it is her commitment to the anthropological and sociological understanding of cultures through her research, her compassion and wisdom shown to the students she works with, or her tireless efforts with the refugee communities that support individuals as they begin new lives in the Mohawk Valley, Kathryn Stam is a role model to many. On behalf of SUNY Poly, I congratulate her on this award.”

The event, which has been held under various names and forms over the years, has been honoring professional women of the Mohawk Valley for several decades.

Stam earned her doctorate in social science (Anthropology and Sociology) from The Maxwell School of Citizenship and Public Affairs at Syracuse University, an M.S. in Forest Resource Management from SUNY College of Environmental Science and Forestry, and a B.A. in Environmental Studies from the University of Vermont. Her areas of research include cultural anthropology, information design and technology, information security and information professions, anthropology of work, communication, refugee studies, and Thai studies.

Stam also serves as the President of the Board for the Midtown Utica Community Center, whose mission is to foster inclusive community participation by providing an environmentally sound facility for arts, recreation, celebration, and locally based human services in order to increase opportunity for personal and collective growth in our community.

“Dr. Stam truly embodies SUNY Poly’s spirit of curiosity, innovation, and dedication to learning – the heart and soul of our institution,” said Dr. William Durgin, SUNY Poly provost. “We are incredibly proud of the work she does and the example she brings to our classrooms, campus, and community each and every day. It is truly an honor to have her as part of the SUNY Poly family.”

Recently, Stam — along with SUNY Poly Web Coordinator Lynne Browne — was recognized by The Genesis Group at its annual Celebration of Education for ongoing efforts to shine a spotlight on some of the 15,000 refugees who sought refuge from war and political or ethnic strife, from Cambodia to Sudan.

Stam and Browne were also awarded a grant in 2017 by the New York State Regional Bibliographic Database Grant program to create an archive of the collection of images and stories the two had collected. In particular, the grant focused on archiving items from the Refugees Starting Over Project and Portraits of Hope: Faces of Refugee Resettlement in Central New York – an exhibit at Munson-Williams-Proctor Arts Institute in Utica that was on display in conjunction with the work of internationally recognized photographer Steve McCurry.

Portraits of Hope depicted survivors of war, genocide, and political strife who came to the U.S. and settled in the Utica region after living in refugee camps in Asia, Africa, Eastern Europe, and the Middle East. The exhibition celebrated diversity and confronted stereotypes about resettlement while exploring the challenges and aspirations of local refugees starting over in a new land. Through the archiving of these projects, they will be connected with other collections of New York history as well as with larger statewide and national communities.

“Working in this community, I am impressed with the brilliance, creativity, and potential of some of the girls who might be overlooked because they communicate differently, appear culturally different, or don’t reach the more traditional standards that focus strictly on academic achievement,” said Stam.

“Women refugees and immigrants often struggle with issues that are not the same as their male counterparts. They try to learn English as quickly as they can but that is really difficult for some who may have been denied educational opportunities their entire lives,” Stam added. “A little bit of understanding and assistance can go a long way to help them overcome isolation and confusion about many of the social, health, and legal systems upon which they now interact.”

“I am so pleased when I see people and organizations in our community being thoughtful about the inclusion of everyone. Gone are the days when it’s acceptable to invite a keynote speaker or even a panel of speakers that does not represent broader perspectives and positions,” she said.

Stam is also a 2015 recipient of the SUNY Chancellor’s Award for Excellence in Scholarship and Creative Activities, given by SUNY System to publicly proclaim its pride in the accomplishment and personal dedication of its instructional faculty and professional staff across its campuses. Stam was honored with the award for her qualitative research on information technology and culture which has been published in numerous academic journals as well as for her co-authoring of Information Nation: Education and Careers in the Emerging Information Professions. In 2010, she received the SUNY Chancellor’s Award for Excellence in Teaching.

“Our mission statement is to build powerful women, professionally, personally, and politically,” said Lucretia Hunt, chair of the event. “We are women helping women. In other words, to be all they can be. I personally know that women have come a long way, but women have accomplished what they have not for themselves, but for others – their daughters, their granddaughters, and their nieces. And I know that while the glass ceiling has been shattered, it hasn’t fallen yet.”

The event was held on Tuesday, March 20 at Daniele’s Banquet Specialists in New Hartford.