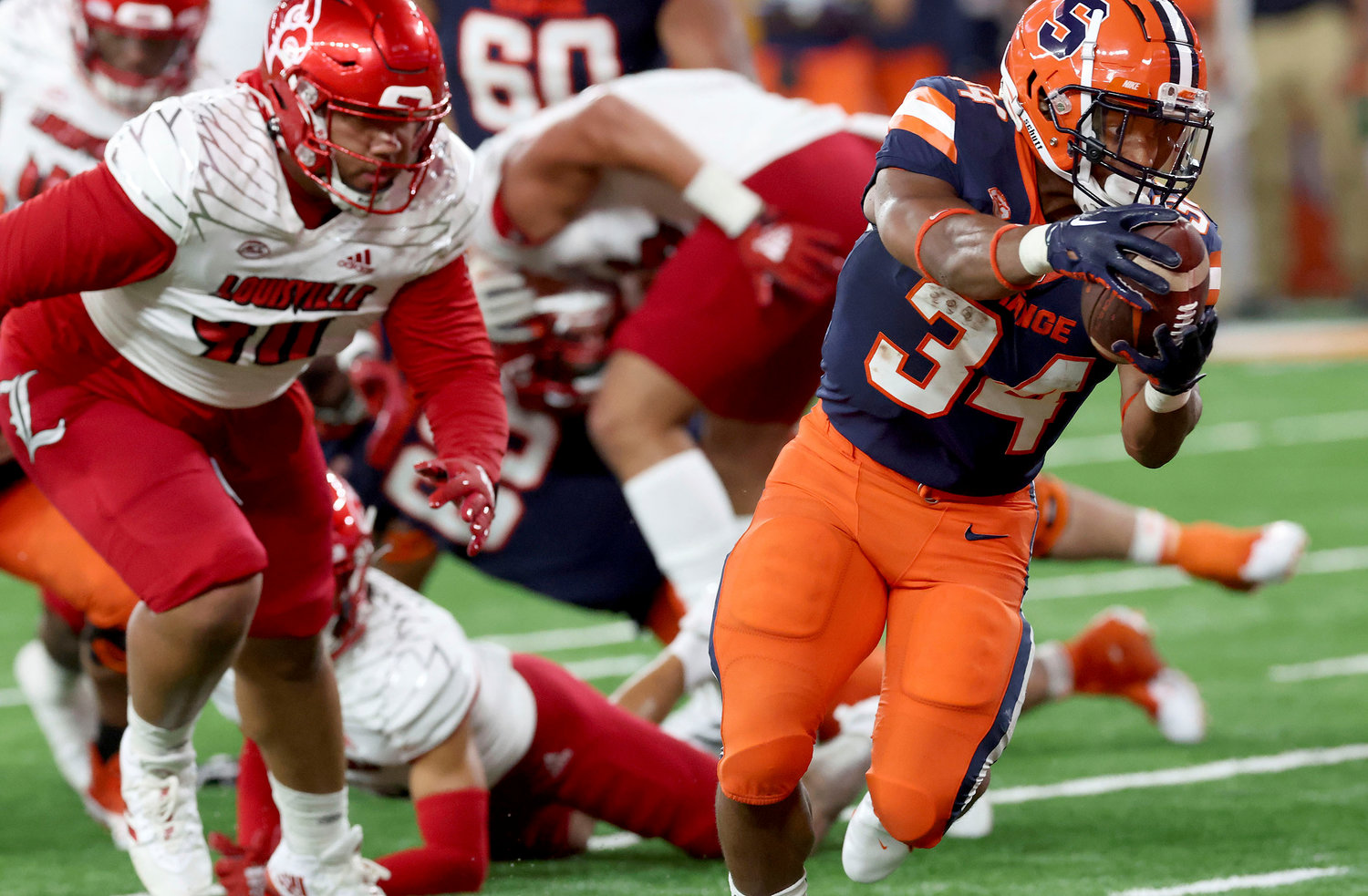 Syracuse running back Sean Tucker reaches for the goal line during a game against Louisville last Saturday in Syracuse.
(Dennis Nett/The Post-Standard via AP)
Posted Saturday, September 10, 2022 5:15 am
Associated Press

The game will be televised on CBS Sports Network.

Syracuse, which routed Louisville 31-7 at home in its opener, gets its only road test before an Oct. 22 visit to No. 5 Clemson. UConn, which beat Central Connecticut 28-3 last week, is trying for its first win over an FBS opponent since beating UMass in October of 2019. The Huskies, who went 1-11 a year ago, have not beaten a Power Five team since a victory over Virginia in 2016.

UConn’s running game against the Syracuse defense. The Huskies, led by running back Nate Carter (170.5 yards per game), have rushed for 519 yards in their first two games. The Orange gave up just 137 to Louisville in their opener. UConn hopes to control the time of possession to give itself a chance to win.

Syracuse: QB Garrett Shrader and RB Sean Tucker. Tucker scored twice and had 100 yards rushing and 84 receiving on a team-high six receptions in the victory over Louisville last week. He became the 15th back in school history to rush for over 2,000 yards in his career. Shrader threw for two scores and ran for another against the Cardinals.

UConn: QB Zion Turner and LB Jackson Mitchell. Turner, a true freshman, took over when Penn State transfer Ta’Quan Roberson went down with a season-ending knee injury against Utah State. He completed 14 of 22 passes in his first start for 172 yards and two touchdowns with two interceptions. Mitchell, who had 120 tackles last season, leads the Huskies with 23 through two games this year, including a career-high 16 tackles against Utah State.

Syracuse is attempting to go 2-0 for the first time since 2018. ... Syracuse has outscored UConn 122-55 over their past three meetings, all wins for the Orange. ... Syracuse starting linebacker Stefon Thompson and fullback Chris Elmore will miss the rest of the season with lower-body injuries suffered in the first half of the Orange’s win over Louisville. ... UConn will play its third consecutive game without a defensive coordinator after the departure of Lou Spanos, who is on an indefinite leave of absence for personal reasons.

UConn’s defense-by-committee has given up an average of 392 yards in its first two games.