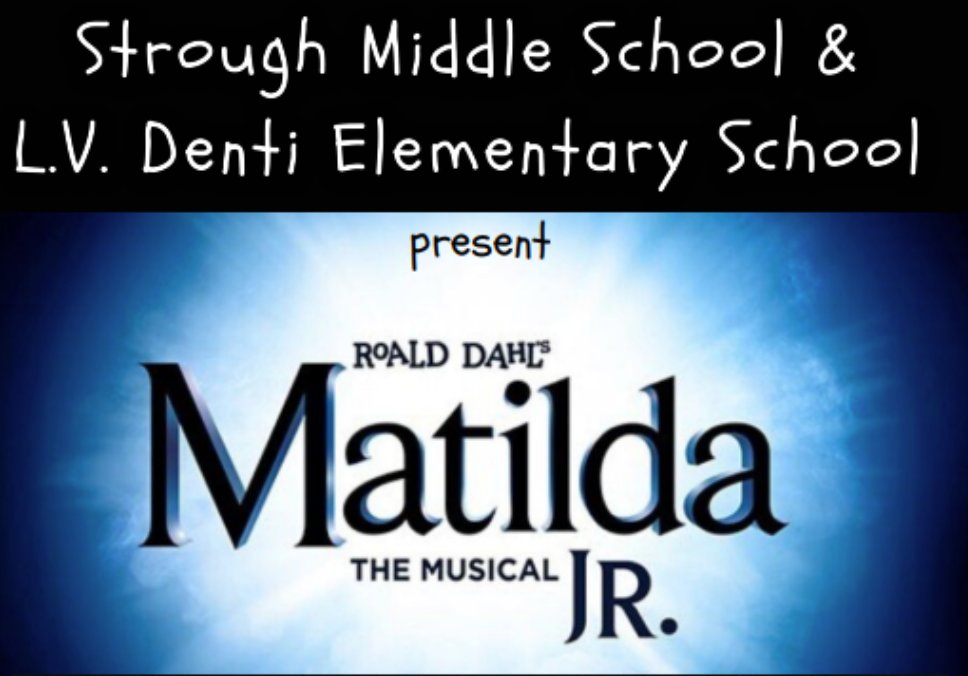 The Strough Middle School and Louis V. Denti Elementary School have come together and will present Roald Dahl’s “Matilda The Musical JR.” on May 19 to 21 at 6:30 p.m. at the Strough Auditorium.
(Submitted image)
Posted Friday, May 13, 2022 6:30 pm

ROME — The Strough Middle School and Louis V. Denti Elementary School have come together and will present Roald Dahl’s “Matilda The Musical JR.” on May 19 to 21 at 6:30 p.m. at the Strough Auditorium.

All tickets are general admission and only available at the door. Tickets are $5 for adults, $3 for students, and are also available in a family bundle for $10. Tickets will go on sale at 5:45 p.m. each night and doors will open then as well. Tickets can be purchased with cash or checks made out to the “Strough Drama Club.”

“Rome’s streets will be filled by the smell of rebellion when Strough Middle School and Louis V. Denti Elementary School present Roald Dahl’s ‘Matilda The Musical JR,’” according to an announcement by district officials.

Based on the book “Matilda” by Roald Dahl and adapted from the award-winning full-length musical, the production features a book by Dennis Kelly and music and lyrics by Tim Minchin.

The show “tells the story of an extraordinary girl who, armed with a vivid imagination and a sharp mind, dares to take a stand and change her own destiny,” the announcement adds.

“Matilda, a little girl with astonishing wit, intelligence, and psychokinetic powers, lives with cruel parents who find her to be a nuisance, a lousy little worm, and a bore. When Matilda enters her first term at school, she captures the attention of Miss Honey, a kind teacher, and the two form a wonderful friendship. Unfortunately, the school is ruled by a tempestuous and mean headmistress named Miss Trunchbull, who hates children and delivers cruel and unjust punishments to all her charges,” the announcement said.

“Matilda is determined to change her story, but will her cleverness and courage be enough to withstand the reign of Miss Trunchbull?” it adds.

For more information on the show, visit the event page on Facebook.