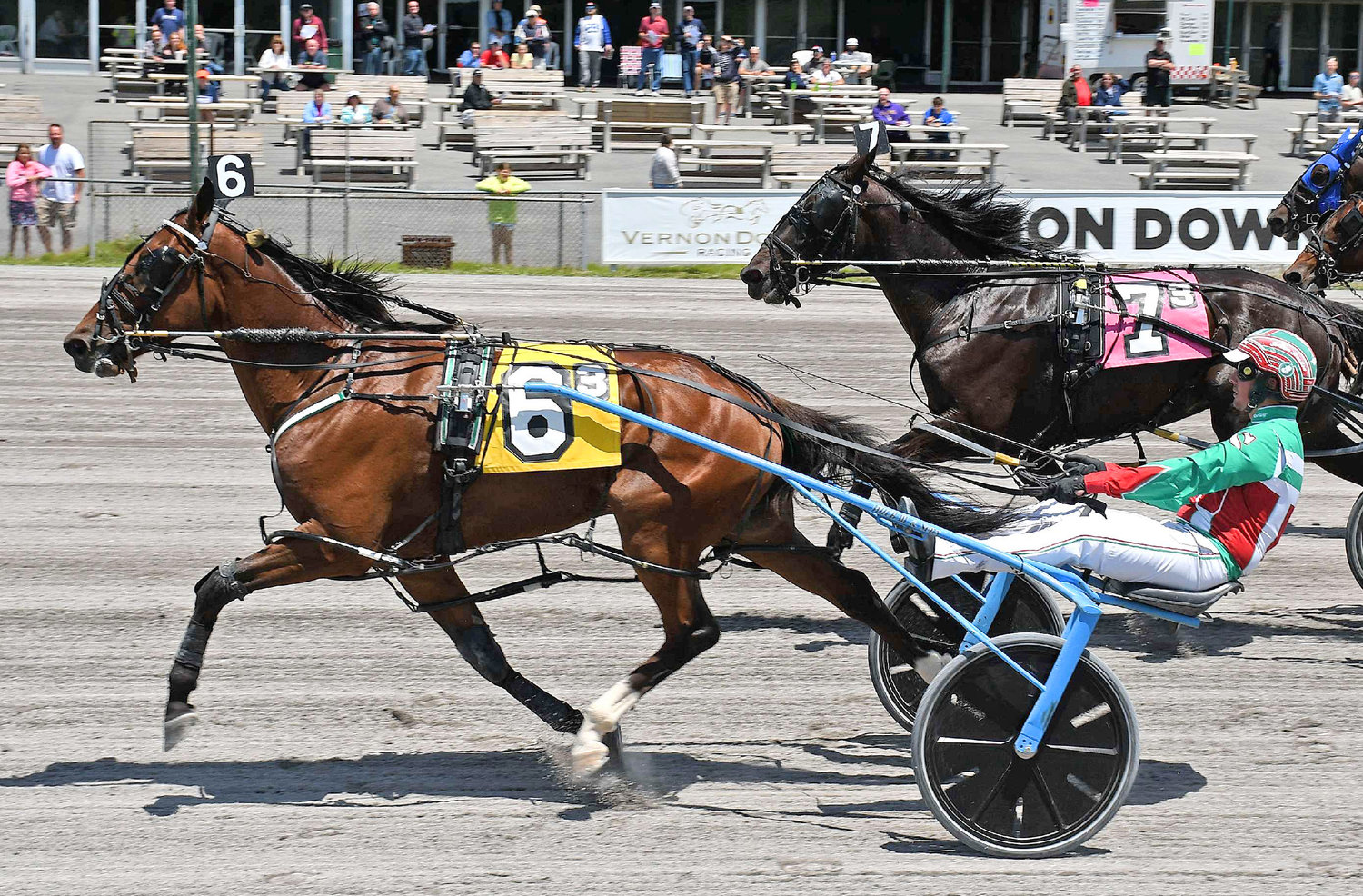 Bounty Hunter ($12.60) led to the first quarter in 27 seconds. JD (Mark MacDonald) took over heading to the top of the backstretch. He was first to the half in 56 seconds. Twin B Deluxe (Jason Bartlett) came first-up going around the far turn and took a slight lead before hitting three-quarters in 1:24.

As they headed to the stretch JD reclaimed a short lead. Bounty Hunter came powering out of the pocket and went on by to win in a lifetime best of 1:52.2. JD had to settle for second. American Classic (Andy Miller) finished third.

Bounty Hunter is a 3-year-old gelding by Huntsville. He is owned by Royal Wire Products and trained by Robert Cleary. He = has two lifetime wins.

All About The Hunt and driver David Miller captured the $29,950 second division.

Hazeville (Mark Macdonald) took the lead and led to the quarter in 26.4 seconds. All About The Hunt ($3.80) took over control as they headed for the half. He was there first in 55.3 seconds. Gone Before Dawn (Marcus Miller) came first-up and put on the pressure as All About The Hunt was first to three-quarters in 1:23.2.

As they made the turn for home All About The Hunt shook off Gone Before Dawn and got his first career victory in 1:51.4. Hazeville was second. American Classic (Andy Miller) was third.

The Hunt is a 3-year-old colt by Huntsville. He is owned by Crawford Farms Racing and Heather Marshall while trained by Ron Burke.

As they reached the stretch River Ness took over and held off a push by eventual second place finisher Pleaseletmeknowto win in 1:52.1. Early Action held on to finish third.

River Ness is a 3-year-old gelding by Huntsville. He is trained by Ron Burke (two training wins) for owners Burke Racing Stable, Weaver Bruscemi, J&T Silva-Purnell & Libby. It was his second win this year. He has three career victories.

Seven Hundred and Stratton used a late charge to win the $30,550 fourth division.

Hurrikane Chuck (Mark MacDonald) led the way to the first quarter in 27 seconds. Kingsville (Jason Bartlett) then took over and led to the half in 56 seconds. Blue Collar Man (Dan Daley) was first to make a move going first-over. Kingsville had a short lead to three-quarters in 1:23.4.

Seven Hundred is a 3-year-old colt by Huntsville. He is owned by Rick Berks and trained by Bruce Clarke. It was his second win of the season. He has four career victories.

Da Boogie Man went to the front as Jenny Lake ($4.10) followed in the two hole. Da Boogie Man led to the quarter in 28.2 seconds. He used a 29.3-second second quarter to be first to the half in 58 seconds. The gelding cruised to three-quarters in 1:26.4.

As they made the turn for home Jenny Lake popped the pocket. Da Boogie Man and Jenny Lake battled down the stretch. Jenny Lake spurted by just before hitting the wire first in 1:55.4. Da Boogie Man had to settle for second. Lepanto (Barton Dalios) finished third.

Jenny Lake is a 6-year-old mare by RC Royalty. She is trained by Paul Minckler for owners Ed Namiotka Jr. and Carol Namitka. It was her second win this season. She now boasts 27 career victories.

Leading driver Justin Huckabone added three more wins to his total. He combined with trainer Jennifer Lappe to get wins with Super Betcha ($18.40) and Clouseau Hanover ($17.00). His other win came with Immaculate Prayer ($12.80).

Live racing returns to Vernon Downs on Friday with a post time of 6:05 p.m. For more information, go to www.vernondowns.com.