TOWN OF VIENNA — It may be the most unusual structure in central New York. And it was built by a man from Rome.The Stone Barn Castle, on Elpis Road–which started life as a unique and unusual cow … 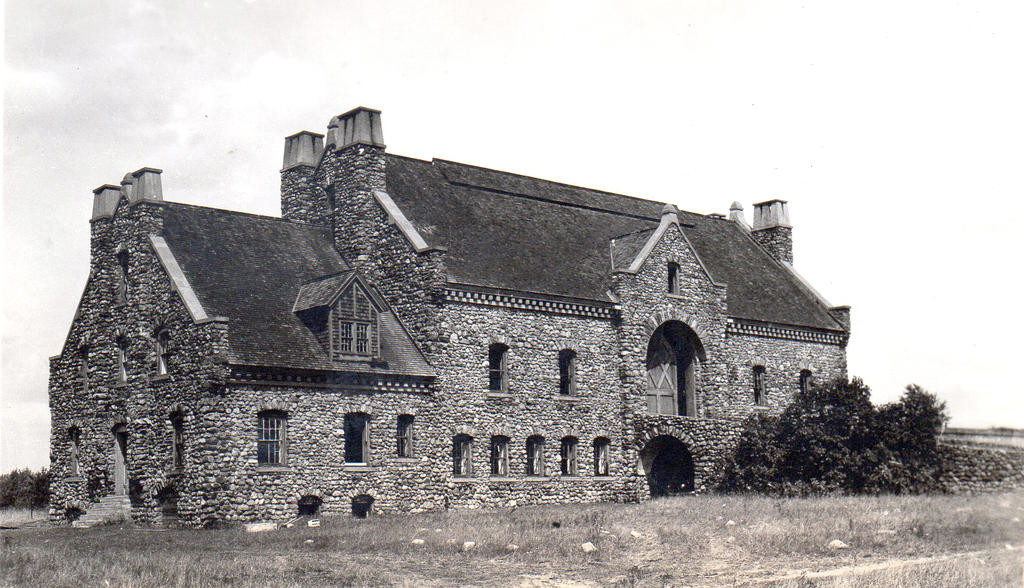 GUTTED BY FIRE — Only the walls were left standing, after the Stone Barn Castle was heavily damaged by a fire in 1946. 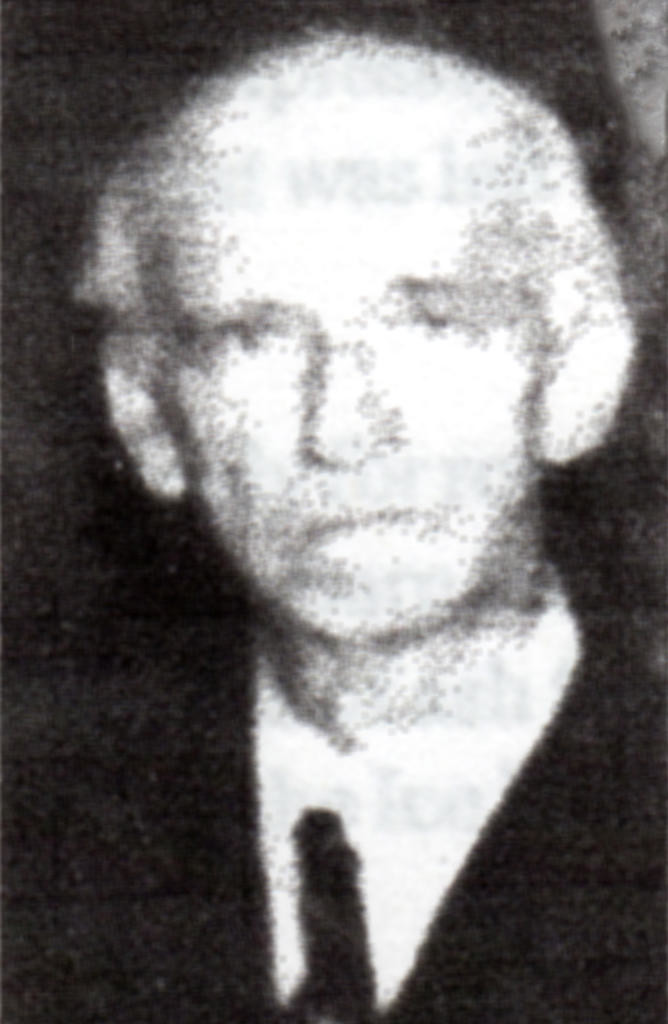 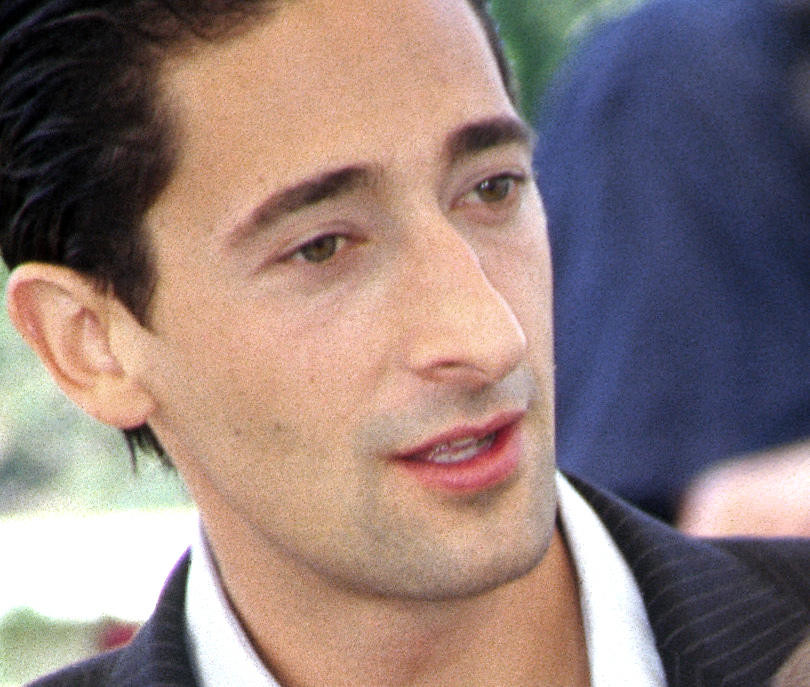 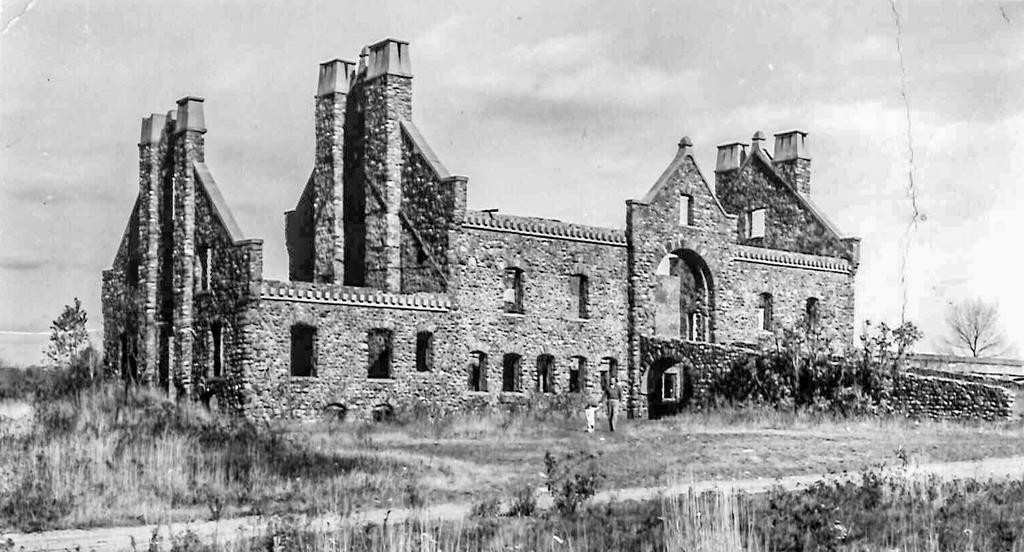 MASTERPIECE — This 1941 postcard shows the Stone Barn Castle. Admired by architects, artists, entrepreneurs and others, the structure has had many uses over the years. 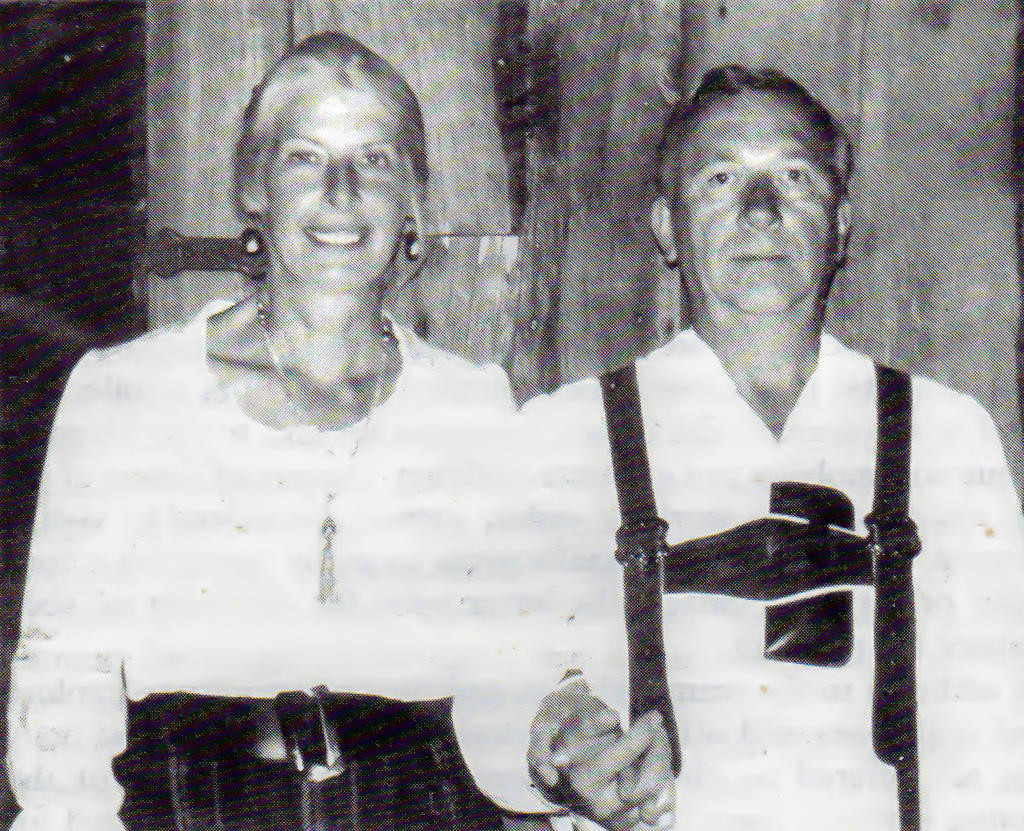 TOWN OF VIENNA — It may be the most unusual structure in central New York. And it was built by a man from Rome.

The Stone Barn Castle, on Elpis Road–which started life as a unique and unusual cow barn — has been used as a nightclub, an amusement park, an antiques shop, a museum, and, today, the mansion of a movie star.

Cleveland Historical Society webmaster Gary M. Comins compiled a detailed account of the history of the structure, and published it on a blog at: blog.clevelandhistoricalsociety.com/?p=667

Below are excerpts from that history, used with Comins’ permission:

Charles William Knight was born Oct. 15, 1847, in Rome. “He was widely regarded as a brilliant hydraulic engineer,” Comins wrote. Knight graduated from the old Rome Academy, then studied civil engineering and obtained his degree in 1878. He worked for different engineering firms, before starting his own. During his lifetime, he “planned and supervised construction of over 50 large waterworks and sewer systems” in different states, including Rome’s.

Knight owned a summer home on Oneida Lake, and there “he dreamed up this castle,” which would become a state-of-the-art cattle barn.

Knight is believed to have started work on the barn in the late 1800s or early 1900s, after purchasing the property. Stones to build the barn were gathered from surrounding land, by teamsters guiding horses and wagons. “Charles Knight’s design for the barn was inspired by those found scattered across the English countryside.”

“By 1902, the Fulton Patriot reported that after 18 months of construction, the exterior was completed and measured at ‘120 feet long, 42 feet wide ...’” But it took another 10 years or so to construct the walls and towering chimneys.

In November of 1902, the Rome Citizen reported:

“The main part of the building is to be used as a stock barn having accommodations for 50 cows, arranged in two rows of 25 each facing the outside. Under the cement floor and between the cows is a large ventilation tube with registers. This tube extends the entire length of the barn and is connected with the [ventilating] chimneys at the east end, through which is forced a current of hot air which produces a suction in the ventilating tube, carrying away all impure air …

“In front of the cows are mangers built of stone and cement, with a drinking fountain for each cow, the fountains being automatically supplied with fresh water drawn by windmills from a spring brook nearby and forced into a reservoir located in the top of the barn.

“At the west end is a creamery and living apartments, 30 [feet] by 42 [feet], under which is a root cellar. In the creamery has been installed all the latest improved machinery for the manufacture of butter.

“There are several other buildings in the course of construction adjacent to the barn, including two large silos, a hospital 30 [feet] by 60 [feet], also built of stone, tenant houses, etc.”

The buildings also included a stone ice house and a smoke house.

Comins’ blog continues: “With thought to the future, Mr. Knight even had the entire structure fully wired for electricity even though it would not even be available for some time after construction.”

The stone mason overseeing the construction, Frank Cottet of France, reportedly built buildings for kings of France and to have fled his home country at the start of the French Revolution.

Knight improved the road between his farm and the Village of Cleveland, to make use of the train and water connections there.

Knight called his place Eralaust Farm. Former employee Erwin Peck said the name was derived from the letters of names of Knight’s family members. He hired local farmer Anthony Hoover, whose family had previously owned some of the land, as farm manager. Hoover’s wife cooked and cleaned for some of the other farm workers, who lived in the tenant homes.

“One of the unique aspects of the Eralaust farm was that it had its milk certified,” Comins’ blog reports. “In the late 1800s, the United States was consuming a large quantity of raw milk. As cities began to grow in population, demand for milk and products were on the rise. Unfortunately, many farmers also maintained distilleries to supplement their income at the time. Farmers began feeding their cows swill left from the distilling process and, combined with unsanitary conditions of the facilities and the farmers, contaminated milk was making its way into the cities and was being fed to babies.” Infant mortality rose to 20 percent.

“With the formation of a Medical Milk Commission in 1893, a certification process was created that enabled dairy farmers to voluntarily meet the strict hygiene standards needed to certify their products. As Eralaust farm was the only producer of certified milk in the area, this provided sales demand for his product in New York City.

“The barn was kept immaculate. The ceiling, which was covered with wainscoting, was washed quite frequently by hand and the rest of the barn was cleaned twice a day. At milking time each man would take a shower and put on a white suit. The cows were chained so they couldn’t lay down and then their flanks and udders were washed and cleaned. The milk was handled as meticulously as the rest of the project. It was strained, and sent to the bottling room. Only one man was allowed [here], where milk was cooled, bottled, and iced (with blocks of ice carved from Oneida Lake in winter), before being delivered to the train station. The Ontario and Western Railway transported the ‘certified’ milk to New York City hospitals, hotels, and homes.”

“Unfortunately, Knight was just not raising enough revenue to keep the farm going … by 1918, the property was up for sale.”

On May 23, 1923, Knight died at his residence on Huntington Street in Rome.

Between 1920 and 1970, the farm had a succession of owners. One wanted to establish a resort, with a golf course and horse riding stables there, in 1928. The Great Depression in 1929 put an end to those plans. In 1940, another buyer turned the barn’s hayloft into a nightclub, but that enterprise ended after a short time.

On the night of March 23, 1946, the barn was heavily damaged by a fire of unknown origin.

A new owner tried turning the property into an amusement park in 1957, but that also did not last long.

Finally, in 1970, the Stone Barn Castle was discovered by visitors who fell in love with it and worked hard to restore it. Alison Ker and Dr. Robert W. Hugel were driving around Oneida Lake, and stopped at CD’s diner in Cleveland for lunch. They saw pictures on the wall of the remains of the barn after the fire. They went to check it out, and became the barn’s new owners.

Hugel, a psychiatrist in Syracuse, had come to the U.S. from Germany in 1960. Ker, a former captain of the Scottish Women’s National Lacrosse Team and former student at the University of Edinburgh, had been a social worker at a hospital in Montreal.

The Hugels rolled up their sleeves and went to work. They hauled out truckloads of garbage and beer cans from the barn. They purchased other old barns in the area, took them apart, and used the wood to restore the Stone Barn. They hired stonemasons to restore the walls.

They started an antique store and museum on the property, showing off old horse carriages, butter churns, a milk separator and other items -- some found on the farm.

In the mid-1970s, the barn was opened to the public. “Under Alison Hugel’s direction special events blossomed, including an Easter Show, Horse Shows, Civil War Re-enactments, a Car Show, Craft Fair and the most successful and only continuing event, a Halloween Show” the latter of which drew 10,000 visitors a year.

When the Hugels retired in 2002, their three children took over the property, and turned it into a center for the arts. But in a few years, the property was up for sale again. In 2007, it was purchased by Artifact Properties for $650,000. Rumors began to spread that the new owner was Hollywood movie star Adrien Brody, after he was sighted around town. The rumors were finally confirmed when InTouch magazine published a spread about the star, his girlfriend and their new digs.

Brody, 41, is originally from Queens. He won an Academy Award for Best Actor in 2002 for “The Piano.” He also starred in the “King Kong” remake in 2005, and in “The Grand Budapest Hotel” this year.

The magazine said Brody bought the castle to surprise his girlfriend, a Spanish actress. The two hired designers like Giorgio Armani, to help them remodel the castle. The couple broke up in 2009.

Comins says, about the latest renovations to the Stone Barn Castle: “I believe most would find their work to date truly stunning. One might wonder what Charles Knight would say if he could see it now.”

This column is an edited version of a story written by Gary Comins and printed on the Cleveland Historical Society blog at: blog.clevelandhistoricalsociety.com/?p=667. It is used with the permission of the author, as requested by Chip Twellman Haley, retired Daily Sentinel news editor, with photos supplied by Comins and the Cleveland Historical Society. Comments, old photos, suggestions for future columns or guest columns may be emailed to: chiphaley@yahoo.com.