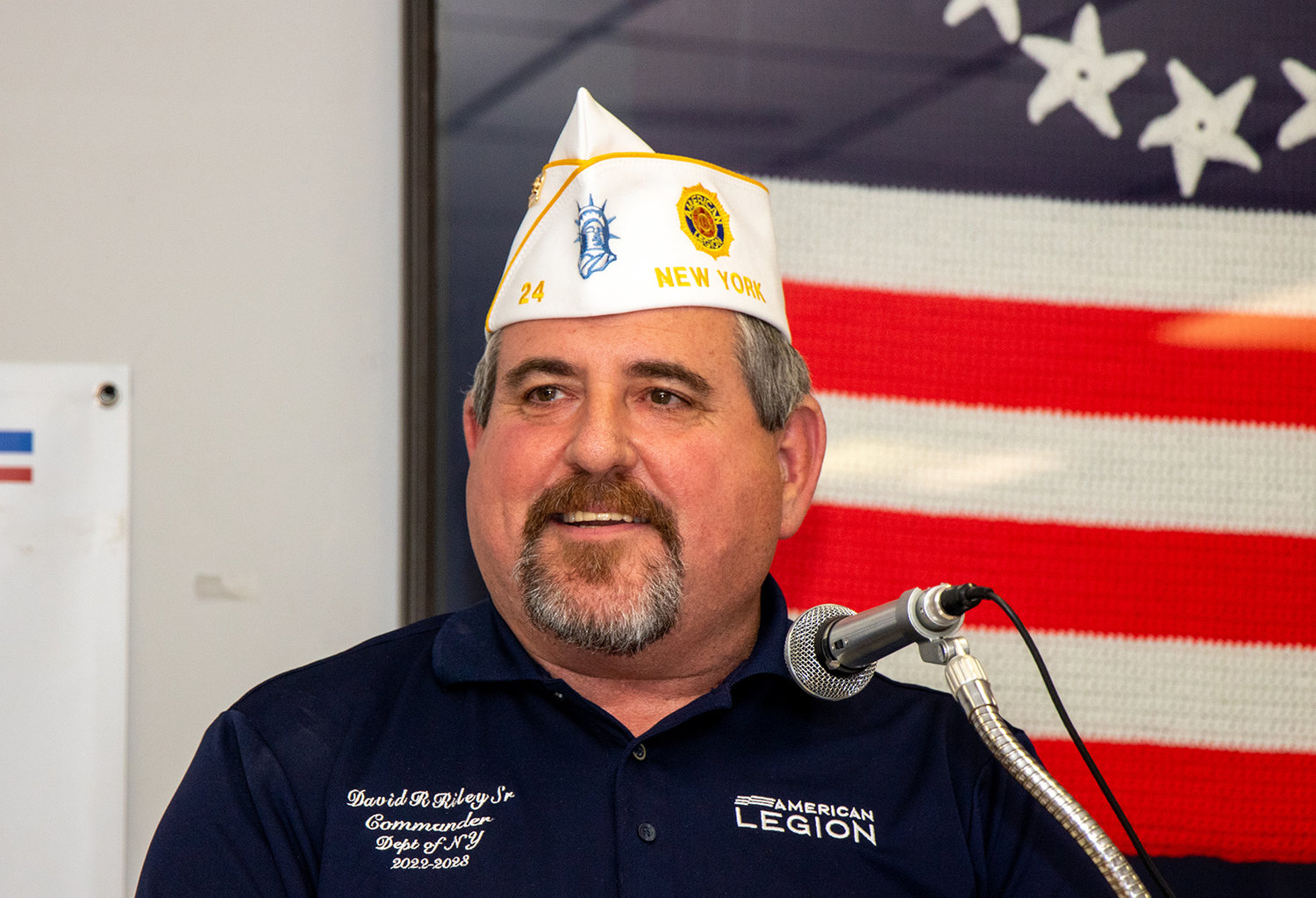 The latest statistics show 17 veterans take their own lives every day, Riley told a packed banquet hall at Oriskany Post 1448 during his official visit to Oneida County on Sunday, Oct. 2. That veteran suicide rate “is 50% higher” than the rate for non-veterans, he said.

Riley’s speech highlighted “Be the One,” an American Legion nation-wide suicide-prevention campaign, which is aimed at getting veterans and the legion family to contact other veterans and ask how they are doing, and to reach out to those exhibiting signs of at-risk behavior. It also encourages struggling veterans to reach out for help.

In addition, he said later, the American Legion Department of New York has established a $1.5 million fund to support organizations and programs that combat post-traumatic stress, suicide and homelessness.

Riley noted that he joined the legion because of its programs for youth – he had been looking for a Scout troop for his son to join and found one sponsored by a Legion Post —  and because he earned the right as an Air Force veteran. Now, Riley said, he gets great satisfaction from seeing the Legion assisting and honoring veterans, from seeing a child whispering to Santa at a Legion Post’s children’s Christmas party, and from seeing the Legion’s impact on government policy and legislation (such as the GI Bill). He also highlighted efforts to raise funds for two Legion charities – the Temporary Financial Assistance Program, which helps disaster-struck Legionnaires, and Operation Comfort Warrior, which provides supplies and equipment to wounded warriors.

In a similar vein, Department of New York Auxiliary President Nancy Babis pointed to her theme for the 2022-2023 year, “Charting a Course to Serve Our Veterans.” She expressed her commitment to raise funds to send veterans to Washington, D.C. to visit the war memorials there through the Honor Flight program.

During a visit there, Babis said she was particularly struck by the “service before self” inscription on the Air Force Memorial near the Pentagon. The quote, part of the Air Force’s core values, could also describe the American Legion Family, she said. “It reflects us and our mission.”

The third state-level leader to speak, Sons of the American Legion Detachment Commander Timothy Van Patton II, pointed to putting the work of the Legion and the Sons at “center stage” in the public’s eye.

“We are absolutely amazing as an organization,” he said, sponsoring programs for youth, community and veterans, yet “never telling a single soul about it.”

He is also spreading the word about another organization, the Civil Air Patrol (CAP), which is the search-and-rescue, aerospace education and youth mentoring auxiliary of the U.S. Air Force. His personal project as detachment commander is to raise funds for New York Wing’s cadet program, which introduces youth to flying in Cessna planes, to the world of science and technology, and to leadership encampments (such as New York Wing’s summer encampment at Hancock Air National Guard Base in Syracuse).

Some 100 members from Legion Posts, Auxiliary Units and Sons Squadrons from around the county turned out for the event, officially welcoming home Commander Riley, the third Oneida County resident to be elected state commander in the Legion’s 103-year history. Most of those units made donations to the state leaders’ charitable causes.

With a motto of “Veterans Strengthening America,” the American Legion has been serving veterans, community, youth and patriotic activities since its founding in 1919.