New York State school districts that do not commit to removing any Native American mascots and imagery by the end of the 2022-23 school year may be in violation of the Dignity Act. 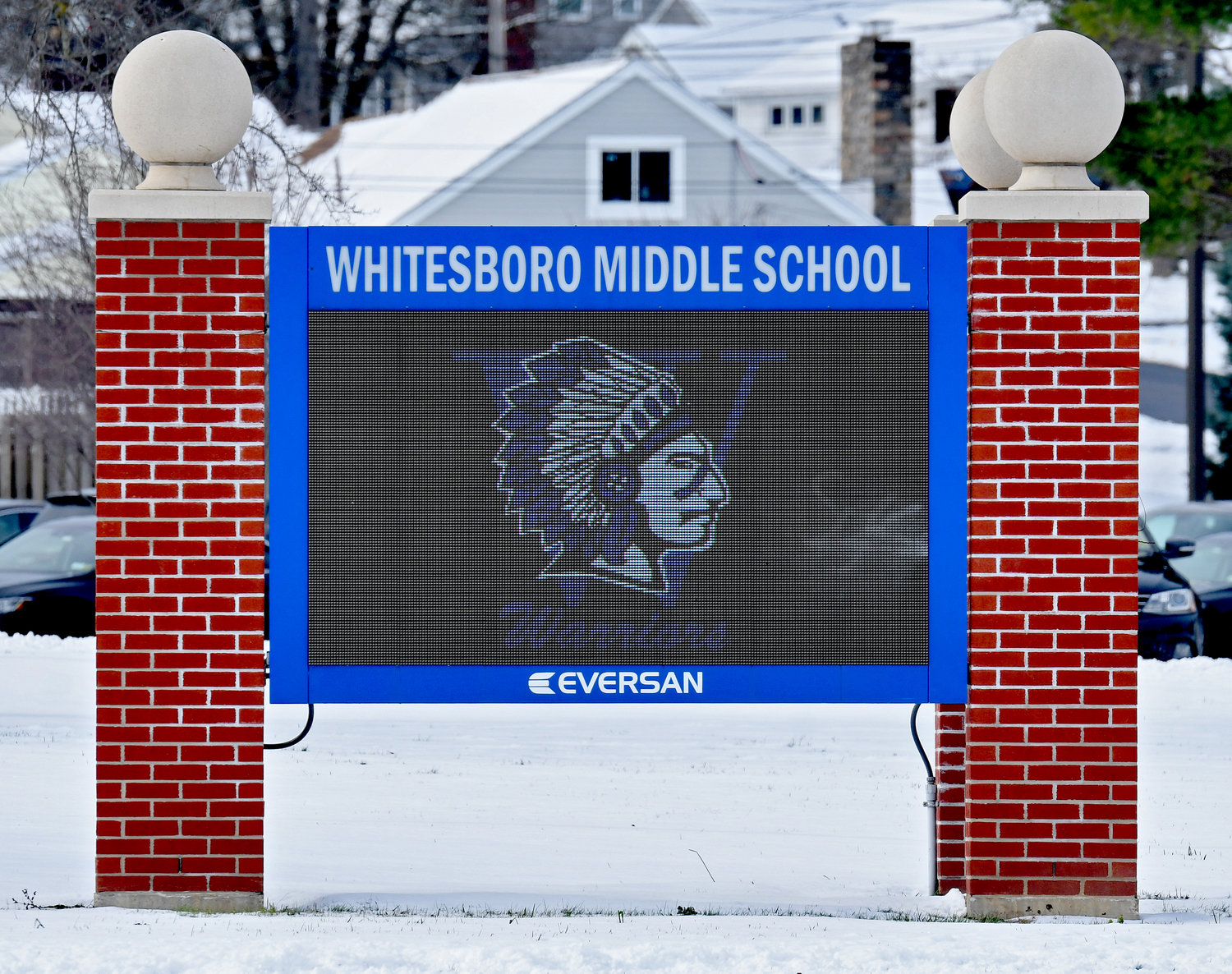 RIGHT: The image of a Native American is seen Monday on the marquee in front of Whitesboro Middle School.
(Sentinel photo by John Clifford) 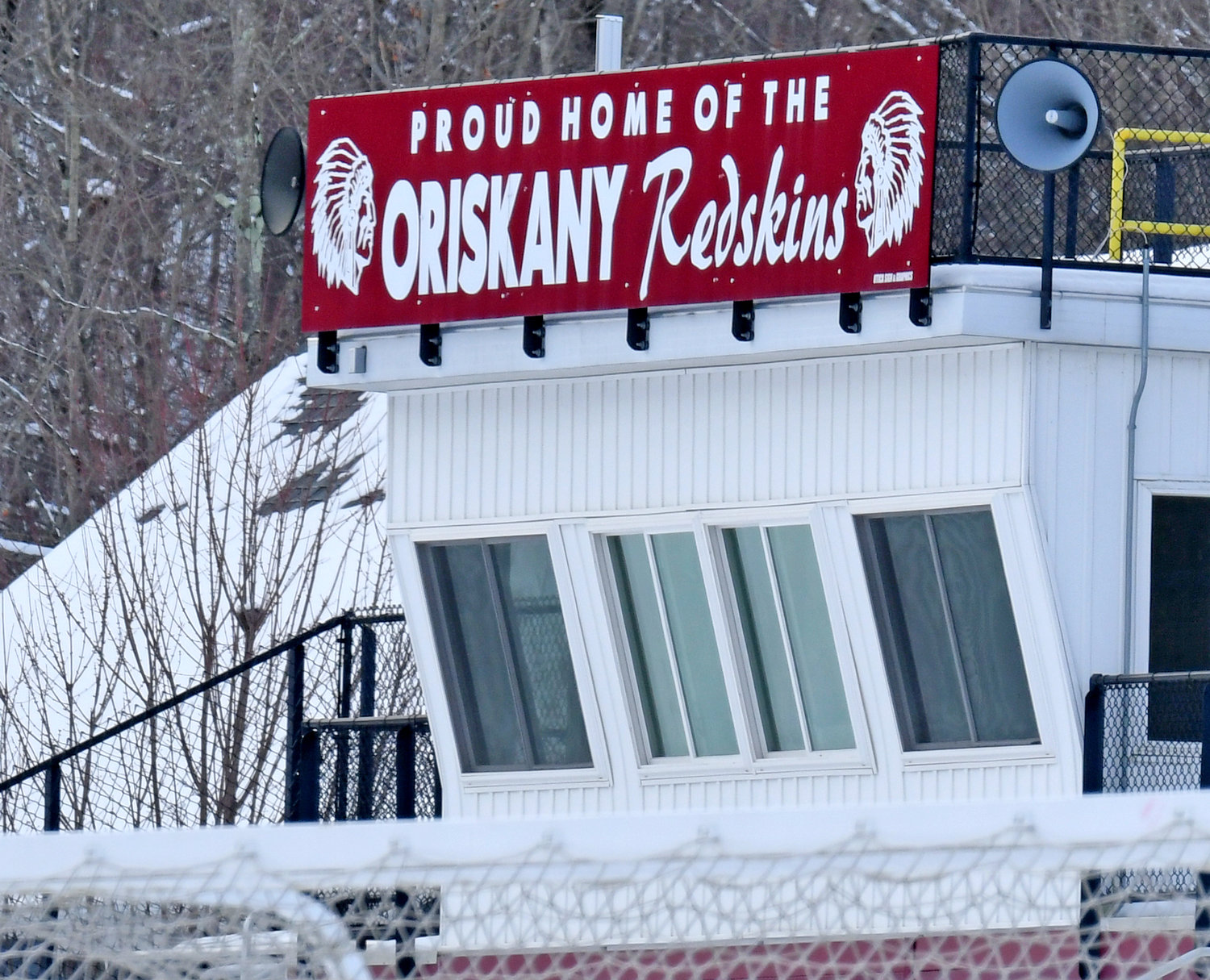 ONEIDA COUNTY — New York State school districts that do not commit to removing any Native American mascots and imagery by the end of the 2022-23 school year may be in violation of the Dignity Act and face the removal of school officers and the withholding of state aid.

A memo sent Nov. 18 to all school districts in the state by James N. Baldwin, senior deputy commissioner for the State Education Department in Albany, reaffirms that the department “wishes to ensure school districts’ knowledge of a recent legal decision and their concomitant need to ensure that district mascots, team names and logos are non-discriminatory.”

“SED has consistently opposed the use of Native American mascots,” Baldwin’s memo said.

Several local schools, however, still have Native American mascots and symbols. Oriskany Central School even still uses the moniker “Redskins.” Although certainly not intended as any slur toward Native Americans, mascots and names like that have become objectionable to many over the years.

Oriskany Central School Board of Education President James Chase declined to make an immediate comment, saying he wanted to meet with the board to discuss the matter first.

Locally, Sauquoit Valley, Waterville and Whitesboro also have Native American-themed mascots and/or graphics in their logos. Superintendents and athletic directors from those districts did not immediately respond to emails seeking comment.

New York State’s Dignity for All Students Act provides the state’s public elementary and secondary school students with “a safe and supportive environment free from discrimination, intimidation, taunting, harassment and bullying on school property, a school bus and/or at a school function.” The Dignity Act was signed into law Sept. 13, 2010 and took effect on July 1, 2012.

Even before that, former state Commissioner of Education Richard P. Mills issued a memorandum in 2001 stating that the use of Native American symbols or depictions as mascots “can become a barrier to building a safe and nurturing school community and improving academic achievement for all students,” Baldwin’s memo said. Mills recognized that there was a state interest in providing a safe and supportive learning environment for every child and asked all boards of education at that time to end the use of Native American mascots as soon as was possible.

When challenged, the Supreme Court in Albany County this year affirmed the commissioner’s original determination - in its entirety - June 22. The court’s decision establishes that public school districts are prohibited from using Native American mascots, the memo said.

Baldwin wrote that school districts continuing to use Native American team names, logos and/or imagery without current approval from a recognized tribe must immediately come into compliance. Schools are learning environments, he told the districts, and students learn as much through observation of their surroundings as from direct instruction. Boards of education that continue promoting Native American mascots must “reflect upon the message their choices convey to students, parents and their communities,” he wrote.

The penalties could be severe for non-compliance.

“Should a district fail to affirmatively commit to replacing its Native American team name, logo and/or imagery by the end of the 2022-23 school year, it may be in willful violation of the Dignity Act,” Baldwin wrote. “The penalties for such a violation include the removal of school officers and the withholding of state aid.”

Oneida Indian Nation Representative Ray Halbritter said the abolitionist of Native American mascots is a way to help make all students, regardless of their own origins, feel welcome at school.

“The Oneida Indian Nation believes that the institutions that teach our children need to be places of safety and tolerance,” Halbritter said.

“Schools should be going out of their way to make children of all ethnicities and heritages feel comfortable - that is what the New York State Education Department is attempting to do with their notice to schools to remove Native American mascots.”

Hallbriter said at its core, this issue is really about how New York State views its responsibilities to an increasingly diverse population.

“For too long, we have permitted old traditions to persist - the kind that suggest, in some circumstances, that it is acceptable to use dictionary defined slurs as mascots, like was the case with the Washington NFL team before they changed their name,” he explained. “Native American organizations, civil rights groups and public health organizations have made clear the damage that the mascotization of native people has on our youth. Promoting inclusivity and mutual respect is the best way to unify our communities moving forward.”