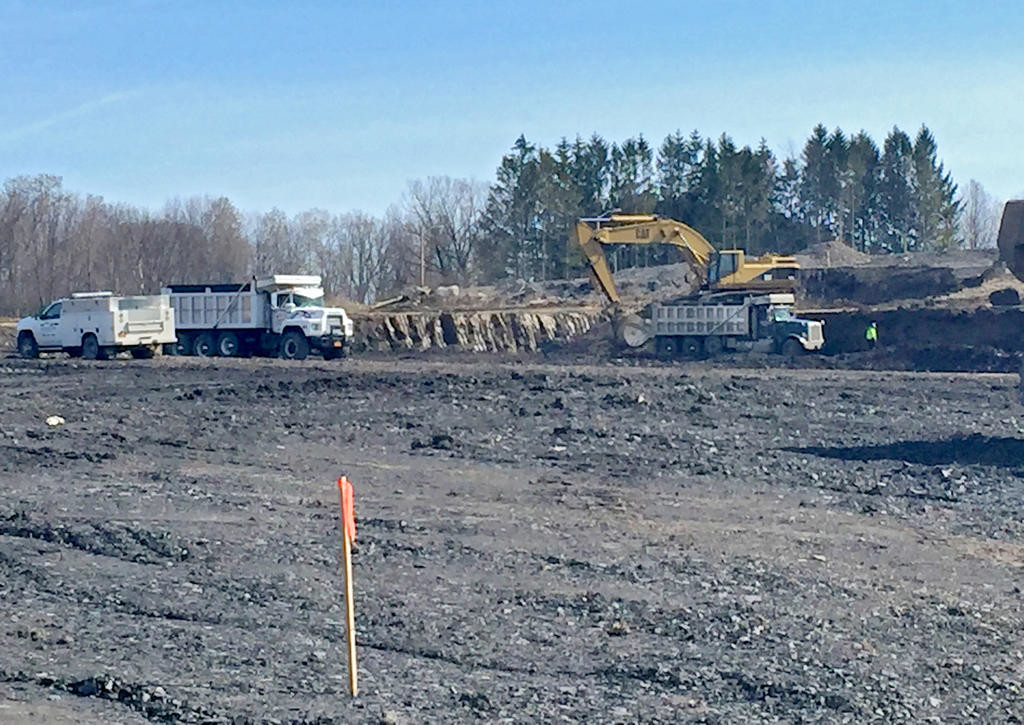 MARCY — The 2016-17 state budget heading toward final passage solidifies the state’s investment in the Mohawk Valley’s future as a nanotechnology hub.

Included in this year’s spending plan is $585 million in state funding for the Marcy Nanocenter site, where Austria-based ams AG is going to develop 360,000-square-foot chip wafer fabrication complex, report state Sen. Joseph A. Griffo, R-47, Rome, and Assemblyman Anthony J. Brindisi, D-119, Utica. With a spring groundbreaking anticipated, earth is already being excavated and hauled from the site so construction can start.

Last August, it was announced that ams, as well as GE Global Research, had agreed to invest billions of dollars in the Marcy Nanocenter and the Nano Utica project, with several thousand new jobs expected in the years ahead. GE will be an anchor in the Computer Chip Commercialization Center that’s nearing completion on the nearby SUNY Polytechnic Institute campus.

“The Mohawk Valley is on the edge of an economic revolution that has the potential to transform our region for years to come, in ways we’ve never seen before,” said Griffo. “None of this will happen overnight, but by investing in public-private partnerships like the Marcy Nanocenter project, we show that Central New York is a welcoming region for new industries.”

Commercial production of wafers for computer chips is projected to start in early 2018. When in full production, the company anticipates there will be more than 700 direct employees. Indirect jobs supported by the plant will be in the neighborhood of 500.

“The state has teamed up with private industry for a project that will make our region a national center for research and commercialization in the field,” said Brindisi. “Many have called the Marcy Nanocenter site the best of its kind in New York state, and it was the vision and continuing strong interest of many state and local officials, especially Governor (Andrew) Cuomo, that is making this long dreamed about project a reality.”

He added, “There is no question that the Mohawk Valley’s best days are yet to come.”

The Marcy Nanocenter has been under development since the late 1990s, spearheaded by Mohawk Valley EDGE. Millions of mostly public dollars have already been invested to attract the nanotechnology industry to Marcy.

The site has been designed to accommodate three semiconductor factories and related support facilities.

“This funding commitment represents the reaffirmation of New York’s commitment to the ams project at the Marcy Nanocenter site that was announced by Governor Cuomo last year,” said EDGE President Steven J. DiMeo. “The earthwork that is underway will soon be transformed as construction begins on ams’ high-performance wafer fabrication facility that will overlook the Mohawk Valley and be an important part of the region’s skyline and economic landscape, and represents the beginning of our economic transformation.”

Fort Schuyler Management Corp., a real estate development affiliate of the state, will be the landlord and lease the facility.

“The continued partnership between Oneida County, the state of New York, SUNY Poly and Mohawk Valley EDGE on this transformational project assures the aggressive timeline ams has laid out stays on track,” said Oneida County Executive Anthony J. Picente Jr.  He commended the support of Cuomo, Griffo and Brindisi for the growth of nanotechnology in the Mohawk Valley. “As we always have, for the benefit of the region, we put politics and partisanship aside to bring real opportunity for economic growth. I thank them for their effort again,” he said.