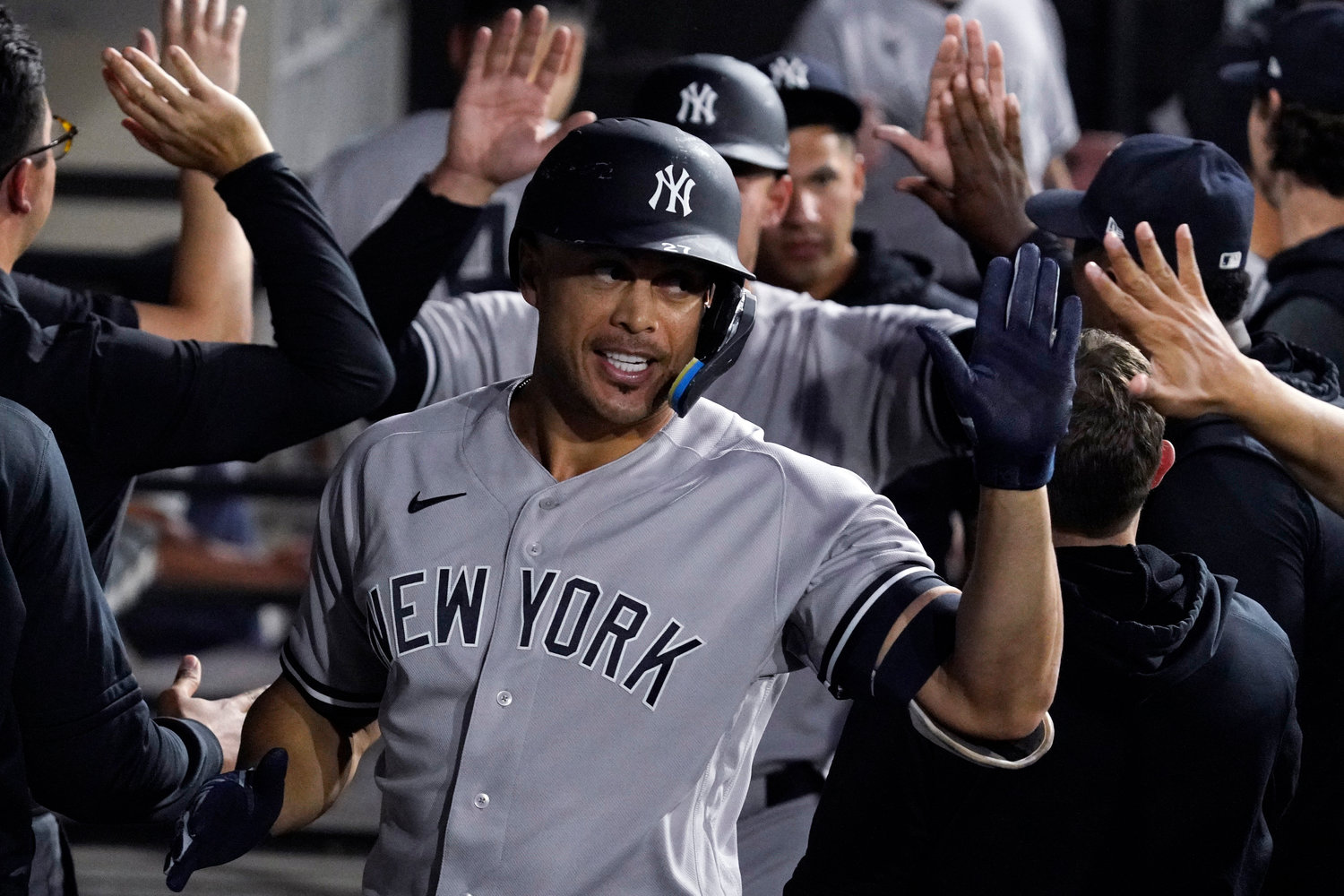 New York Yankees slugger Giancarlo Stanton is congratulated after his two-run home run against the Chicago White Sox during the third inning in Chicago on Thursday night.
(AP Photo)
Posted Friday, May 13, 2022 3:03 pm

CHICAGO (AP) — Right before the biggest swings during New York’s seven-run eighth inning, Marwin Gonzalez, Gleyber Torres and DJ LeMahieu each worked a walk against one of baseball’s toughest relievers.

Just a little opening, and the Yankees pounced.

Aaron Judge and Josh Donaldson also connected for the major league-leading Yankees in the opener of an eight-game trip. Judge had four RBIs, and Donaldson drove in three runs.

Led by its relentless lineup, New York won for the 16th time in 18 games. Stanton and Co. are off to the franchise’s best start since the Yankees also opened 23-8 in 2003.

“You know if you don’t get it done, the guy in front of you (or) behind you will,” Stanton said. “It’s good, it lets you kind of get deep into your at-bat and not rush your plan and try to execute best as possible.”

Chicago tied it at 7 on Yoán Moncada’s first homer of the season, a three-run drive to center against Jonathan Loáisiga (1-1) in the seventh. It was the third homer allowed by Loáisiga this year after he yielded a total of three in 70 2/3 innings in 2021.

Didn’t matter all that much.

After Joe Kelly (0-1) retired the first two batters in the eighth, New York put together its highest scoring inning this season.

Three straight walks loaded the bases for Judge, who beat out a grounder up the middle for a two-run infield single. Torres ignored third-base coach Luis Rojas’ stop sign and slid home safely for a 9-7 lead.

“He’s got that knack to take that extra base. That was a great job right there,” Boone said.

Boone sent Torres up to hit for Kyle Higashioka with two outs and Gonzalez on first. He fell behind 0-2 before earning a seven-pitch walk.

Stanton added a two-run single, and Donaldson capped the rally with a three-run shot to left against Tanner Banks.

“They’re good hitters, yeah,” Kelly said. “I’ve faced them numerous times. Free passes are usually not the way to get them out. But I’ll face them again and throw it right at ’em.”

Stanton also hit a pair of two-run homers in his first multihomer game of the season and No. 35 for his career. It was his second game with two opposite-field shots after he also accomplished the feat on July 16, 2011, for the Marlins against the Chicago Cubs at Wrigley Field.

Chicago right-hander Dylan Cease matched his career high with 11 strikeouts in four innings, but he was tagged for a season-high six runs to go along with six hits. He yielded a total of nine runs in his first six starts of the year.

The White Sox had won seven of eight.

“It was odd, but I mean for me I’m just going to tip my cap,” Cease said. “They beat me today. Get after it the next one.”

Rookie Luis Gil permitted four runs and five hits in four innings in a spot start for New York, which played a doubleheader Sunday against Texas and a makeup game Monday.

Anthony Rizzo went 1 for 5 and committed an error in his first game back in Chicago since he was traded by the Cubs to the Yankees in July. The first baseman played for the Cubs for 10 years, helping the team win the World Series in 2016.

“It feels good always, being here,” Rizzo said. “This is obviously a special place for me ... and my family. That will never change.”