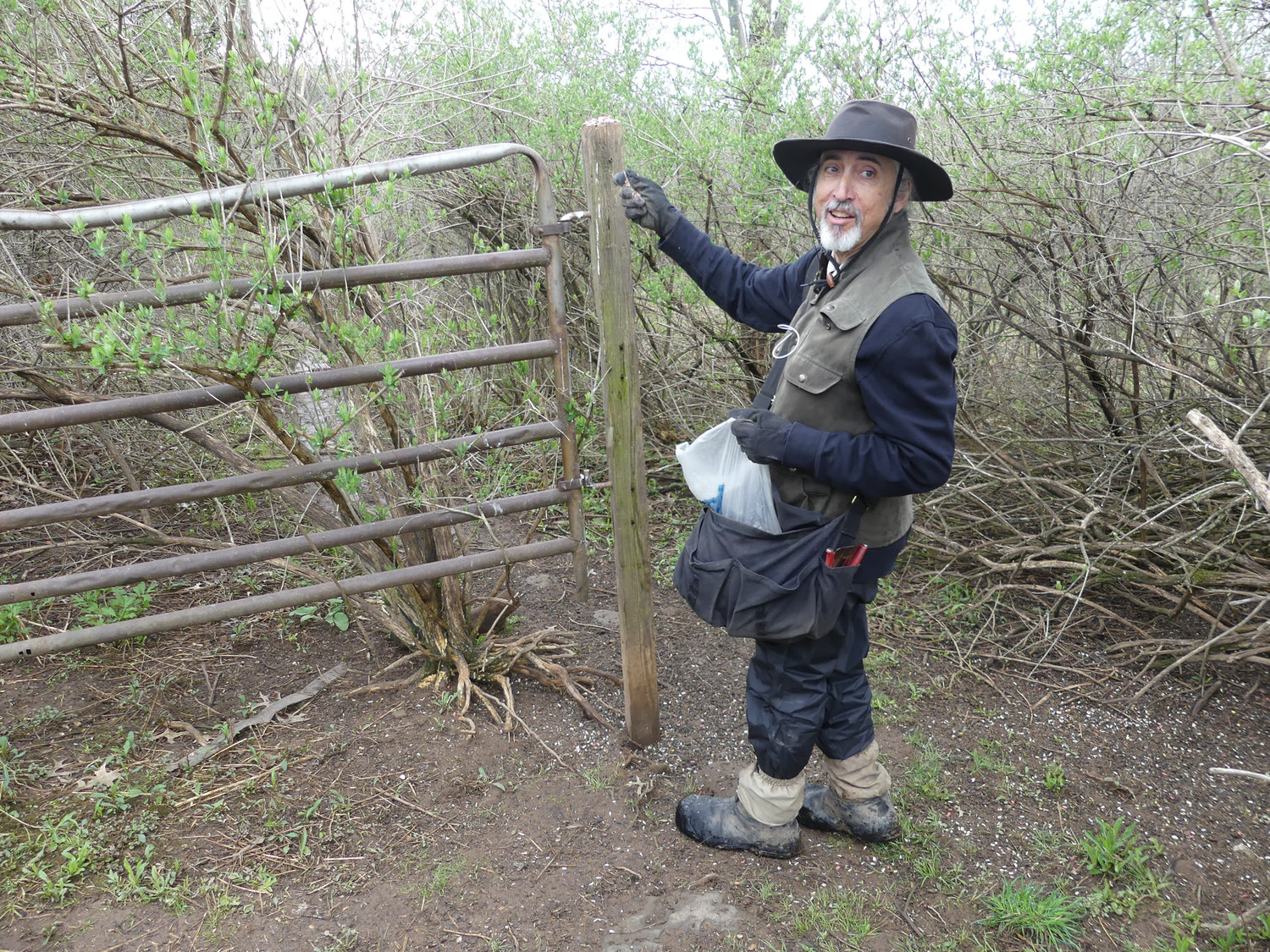 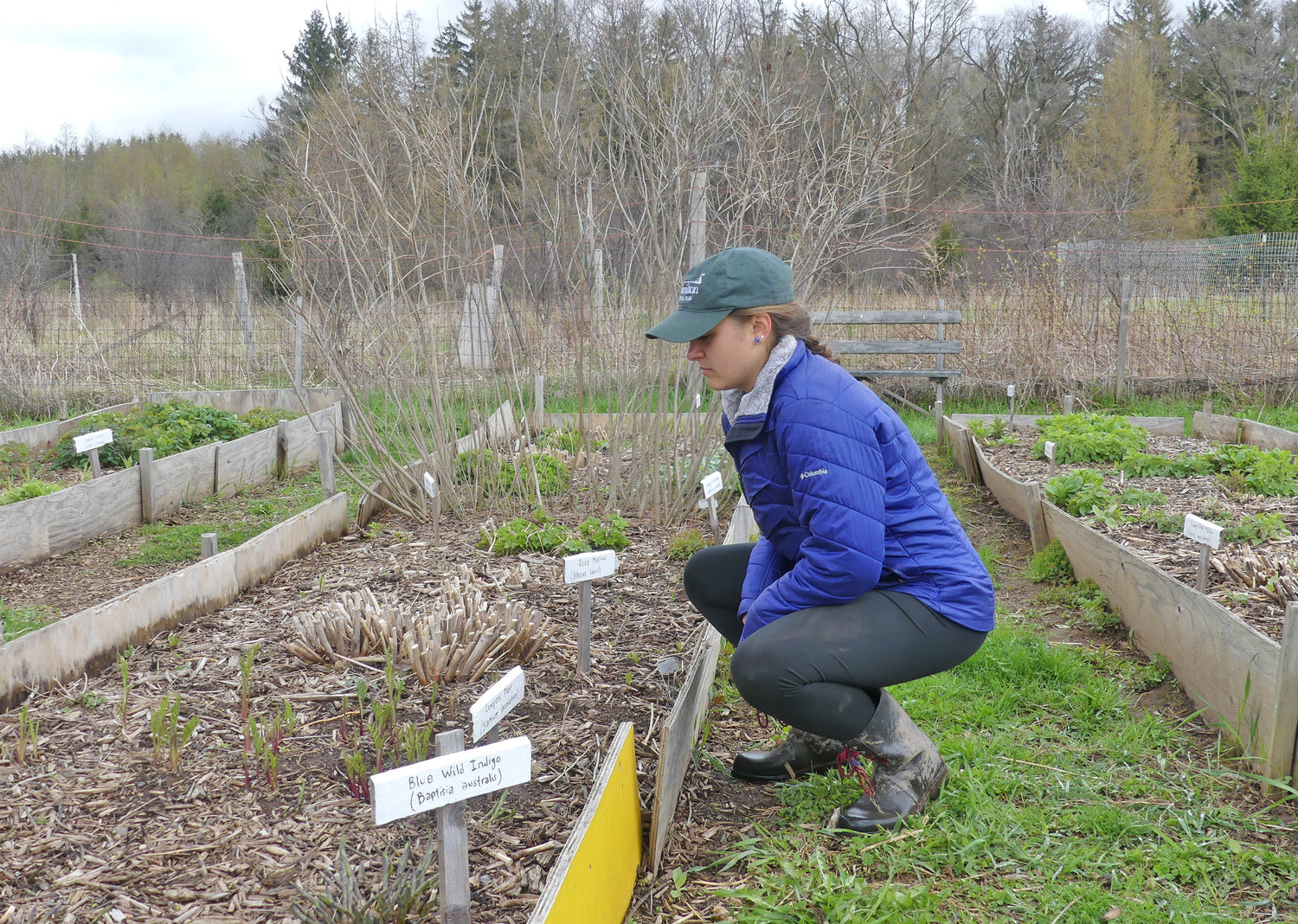 WHAT’S SPRINGING UP? — Hamilton College Environmental Studies student Hannah Katz, who is involved in an internship/independent study program at Spring Farm CARES Nature Sanctuary, checks over some wildflowers that were just beginning to sprout. Over at the college, Katz and other students are actually growing some native species of the area and replanting some over at the conservancy.
(Clinton Record photo by Nicole A. Hawley) 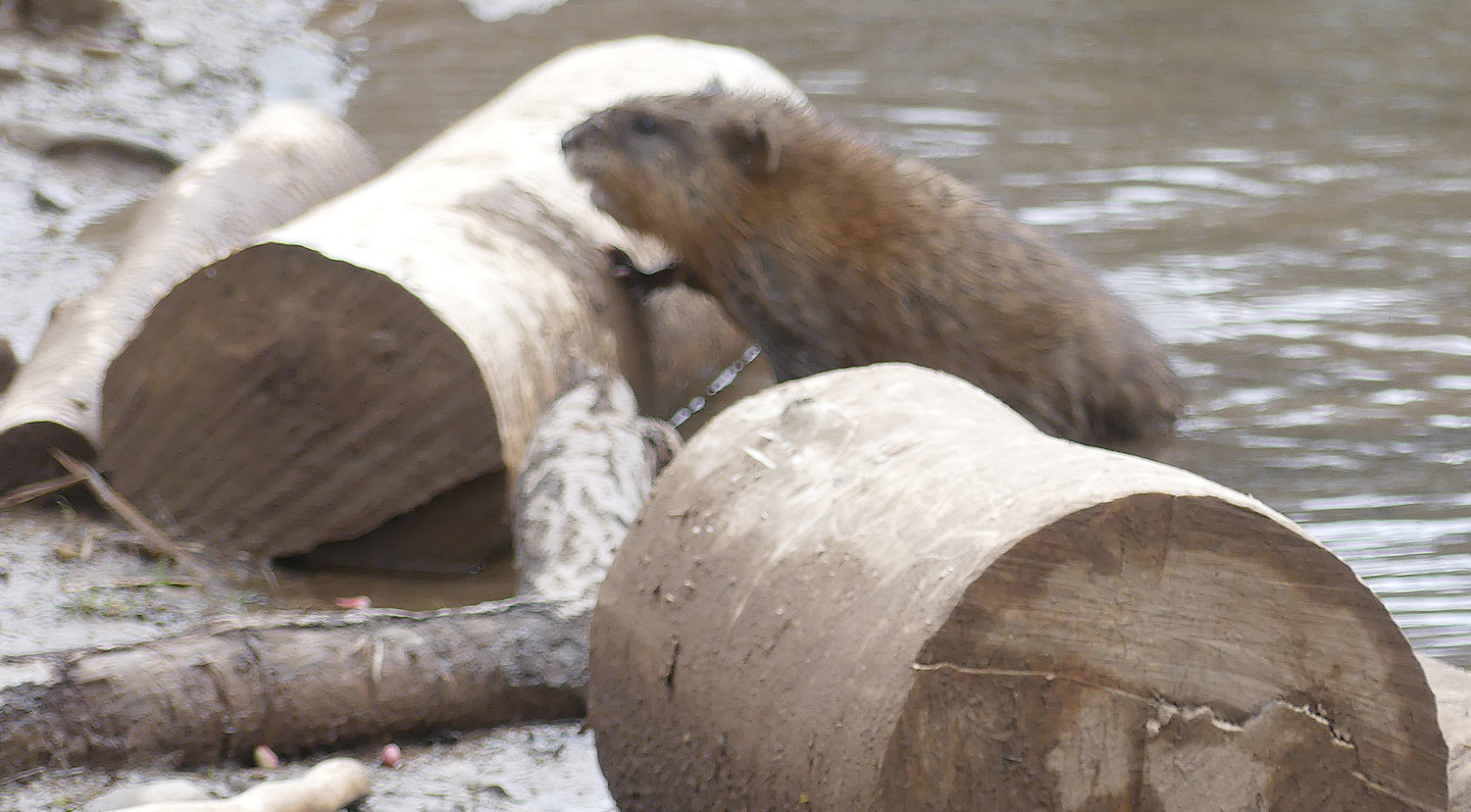 LOCAL NEIGHBOR — A muskrat peeks out of the water over in an area that is home to his fellow muskrats, some beavers, geese, ducks and even a mink or two, at the Spring Farm CARES Nature Sanctuary in Clinton.
(Clinton Record photo by Nicole A. Hawley) 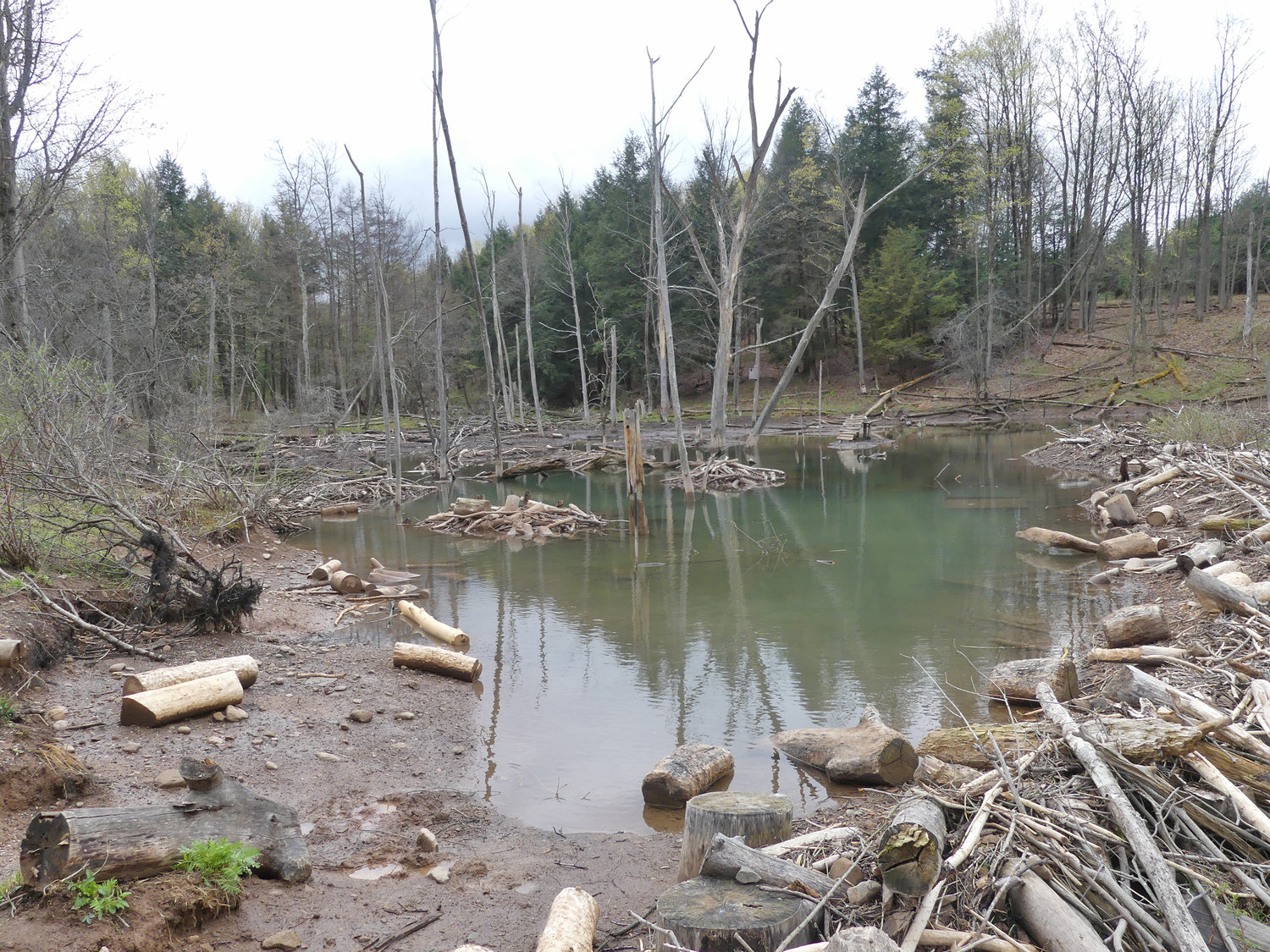 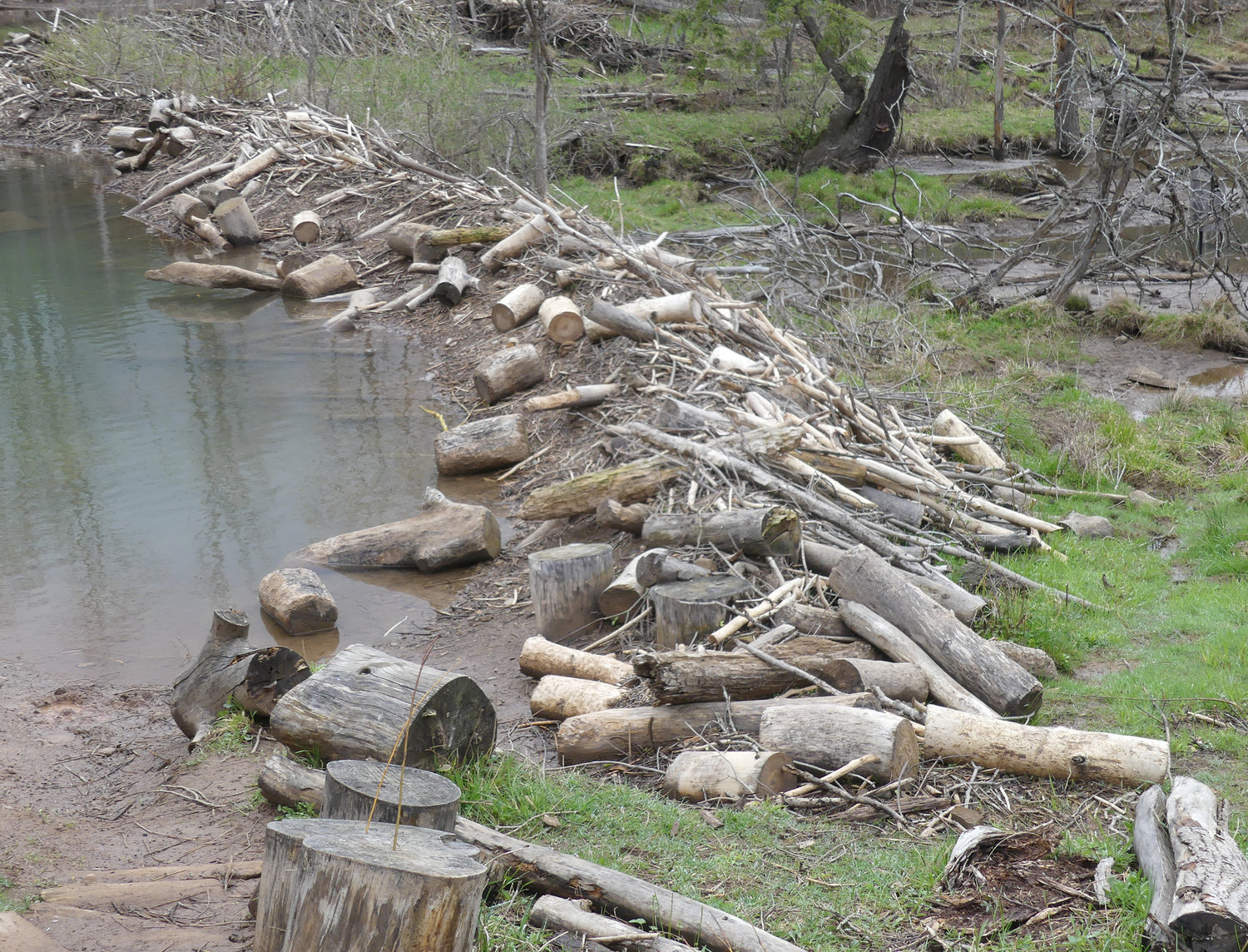 HARD LABOR — This wall constructed of logs is the result of all the handiwork of beavers who reside at the Spring Farm CARES Nature Sanctuary in Clinton.
Previous Next
Posted Thursday, May 9, 2019 12:00 pm
Nicole A. Hawley
Staff writer
email

CLINTON — Spring Farm CARES has a reputation for rescuing and caring for injured and sick farm animals and household pets, and serves as a place for them to stay for the remainder of their lives.

But a “hidden gem” is the conservation work and care given to the natural wetlands and wild animals that make the 260-acre property off Route 12 their home at the Spring Farm CARES Nature Sanctuary.

Hannah Katz, a Hamilton College Environmental Studies student, is involved in an independent study internship at the sanctuary this semester and said many people don’t know about the conservation work being done on the Spring Farm CARES property.

“The animal rescue is pretty well known on campus, but not many people know about the Nature Preserve across the road,” the sophomore said. “They have a lot of really cool events...and they are also working with Whitesboro Central School’s Environmental Action Club,” which is comprised of students interested in preserving the environment. Members design activities with goals to preserve the earth and make it a safer place for the future.

The Spring Farm CARES Nature Sanctuary’s mission is to:

• To reestablish native plants and herbs especially, but not limited to, those that are considered to be uncommon or at risk of extinction.

• To restore the natural diversity that once existed in the northeastern hardwood forests.

• To create and maintain habitat for wildlife, especially for native animals considered to be “threatened” or “endangered.”

• To educate the public on the importance of maintaining and protecting natural ecosystems.

• To provide a working example of a nature sanctuary that utilizes only ethical, humane, and organic management techniques.

The sanctuary is staffed by Naturalist Matthew Perry, who is Spring Farm CARES’ Conservation director and nature sanctuary manager. He is recognized throughout the region as an authority on wild birds, their habitat and behavior. Among his specialties are neo-tropical songbirds and Peregrine Falcons.

Perry also has an extensive knowledge of beavers and the flora and fauna that inhabit the wetlands that beavers create.  At the nature sanctuary, Perry has been the Resident Naturalist since 1999. He started out as a volunteer four years earlier. Since then he’s overseen habitat restoration projects including an ambitious reforestation project and a native wildflower/herb restoration project. Much of Perry’s early work at the sanctuary involved making a complete list of all the bird species found on the property.

In recent years, Perry has written dozens of articles about his experiences with wildlife at the nature sanctuary. These have been published in Mohawk Valley Living Magazine.

Perry is also a regional editor of The Kingbird, which is a quarterly journal published by The New York State Ornithological Association.

Katz usually spends about three hours, twice-a-week, helping Perry with the hard labor that goes into preserving, studying and caring for the natural habitats within the sanctuary. Tuesday, April 30 began with a walk through, placing bird seed at the more than 30 feeders located throughout the preserve. Perry feeds his local winged friends twice a day.

And work isn’t just done during the spring and summer months as the native flora come back to life. The wetlands are also home to several native fauna that need study and care during the harsh winter months.

“I just learned to cross-country ski in December — I had never cross-country skied in my life,” Katz laughed, adding that would be how she’d navigate the steep and narrow dirt-and-stone trails within the sanctuary during the winter. “Some of us would use snow shoes too.”

With spring’s heavy, constant rains, the trails were quite muddy, yet dried up corncobs could be found strewn throughout, stripped of their kernels. Katz explained that Naturalist Tim (Johnston) was studying deer behavior in the area and by feeding them corn, he was hoping he would be seen as more “trustworthy” and approachable by the animals.

Perry has a personal attachment to every living thing within the sanctuary. He can name every flower, shrub and tree — some he can even tell you exactly when he planted it.

Being an expert on Peregrine Falcons, the sanctuary manager was “tuned in” to the falcons that have made the State Office Building in Utica their home through his cellphone as he made his way through his daily duties on the preserve. Among his favorite “friends” there are the colony of beavers — “delightful little guys” — that have made the wetlands of the sanctuary their home.

The goal of the preserve is to restore the lands to as close to its natural origins as possible, back hundreds of years before the early settlers occupied the land.

“We’re trying to add what may have been here,” said Perry, further explaining that early settlers made little to no record of the landscape and local wildlife. But he and other conservationists must also keep in mind that the climate and environment of the area is not today what it was several hundred years ago.

“The world has changed a lot since then,” Perry added. Several species of trees, like the Dutch Elm and Chestnut, were wiped out through blights that struck the area in the early 1900s, he said.

Perry continued to point out the other species along the trail, like the Black Ash, Green Ash and Swamp White Oak with its “peeling” bark. There were also sightings of Witch Hazel, Pin Oak, Nannyberry and Chokecherries, with its “blueberry-like” berry.

He continued to point out the more than 100 Bluebird boxes throughout the property as well, along with some screech owl boxes that were placed inside the sanctuary by Hamilton College Professor Christopher Briggs.

“They’re for Bluebirds or other small bird species,” Perry said of the smaller boxes. “They’re intended to be equal opportunity housing.”

Perry said there is care taken in the decision of what trees and shrubs are planted on the property to help create a self-sustaining and thriving ecosystem. Certain trees, flowers, seeds and nuts provide food and sustenance for the wildlife habituating the area, such as the beavers, mink, muskrats, frogs, geese and bird varieties. Tamarack and Pussy Willow, for example, are loved by beavers, in addition to the sweet potatoes Perry feeds them. Those furry “friends” of his actually do the natural work in providing the rich, watery habitat for other mammals, fish, turtles, frogs, birds and ducks.

“They work for us, so we need to work for them,” Perry said about building and restoring the wetlands. “And if you’re going to do a wetland project on the cheap, beavers are good to have on your side.”

As for the trees, “Beech Bark Disease has been spreading through the area for about 20 years now, so we’re replacing the Beech Bark with oaks and other nut-producing trees so when the Beech Bark die (off), the wildlife will have another source of food,” the sanctuary manager added.

Then it was over to one of the grass gardens, which are part of the sanctuary’s reforestation project — home to some mosses, like the Haircap, and other shade plants and meadow plantings, like Fiddleheads, Bloodroot and Horsemint, that they’re working to restore.

And then to the pond, where a goose was nesting and there were plenty of wood ducks swimming. A sleek mink was even spotted, and Perry said he’s found short tail weasels and fishers running about as well.

When not greeted by his “buddy” Rudy the beaver on his daily visits, Perry said his mink friend is not shy either.

Further along the trails, Perry pointed out some patches of Skunk Cabbage, which is one of the first plants to flower in spring.

“It actually generates its own heat, so it will actually push out of the ground and through the snow,” he explained. “And it relies on flies to pollinate rather than bees.”

Among the plantings are also mounds of flowers and a large amount of orchard plantings like crabapples, mulberries, elderberries and Chinese Chestnut.

“I even placed wildflower seeds on top of the (beaver) dam, and we use any opportunity for a natural disturbance, like the recent dam break — a collapse or blow down — we use nature’s ‘bulldozer’ to go in and plant things,” Perry said. “It brings an opportunity for the good of nature.”

Perry and Katz then went over to a special section where wildflowers were being grown and restored that included a special section of Columbine, along with some False Indigo, Meadowsweets, Canadian Burnet, Blue Lobelia, Golden Alexander, Bee Balms, Butterfly Weed, and three types of early native roses: the Virginia Rose, Early Rose and Swamp Rose.

“We’re trying to make up for the deficit,” Perry said. “There’s so many things that used to be here that should still be here.”

Spring Farm CARES Nature Sanctuary is not open to the public, however, special tours may be scheduled and there are programs and lectures hosted at the preserve throughout the year. For more information, go to www.springfarmcares.org/visit/nature-sanctuary/ or call 315-737-9339.