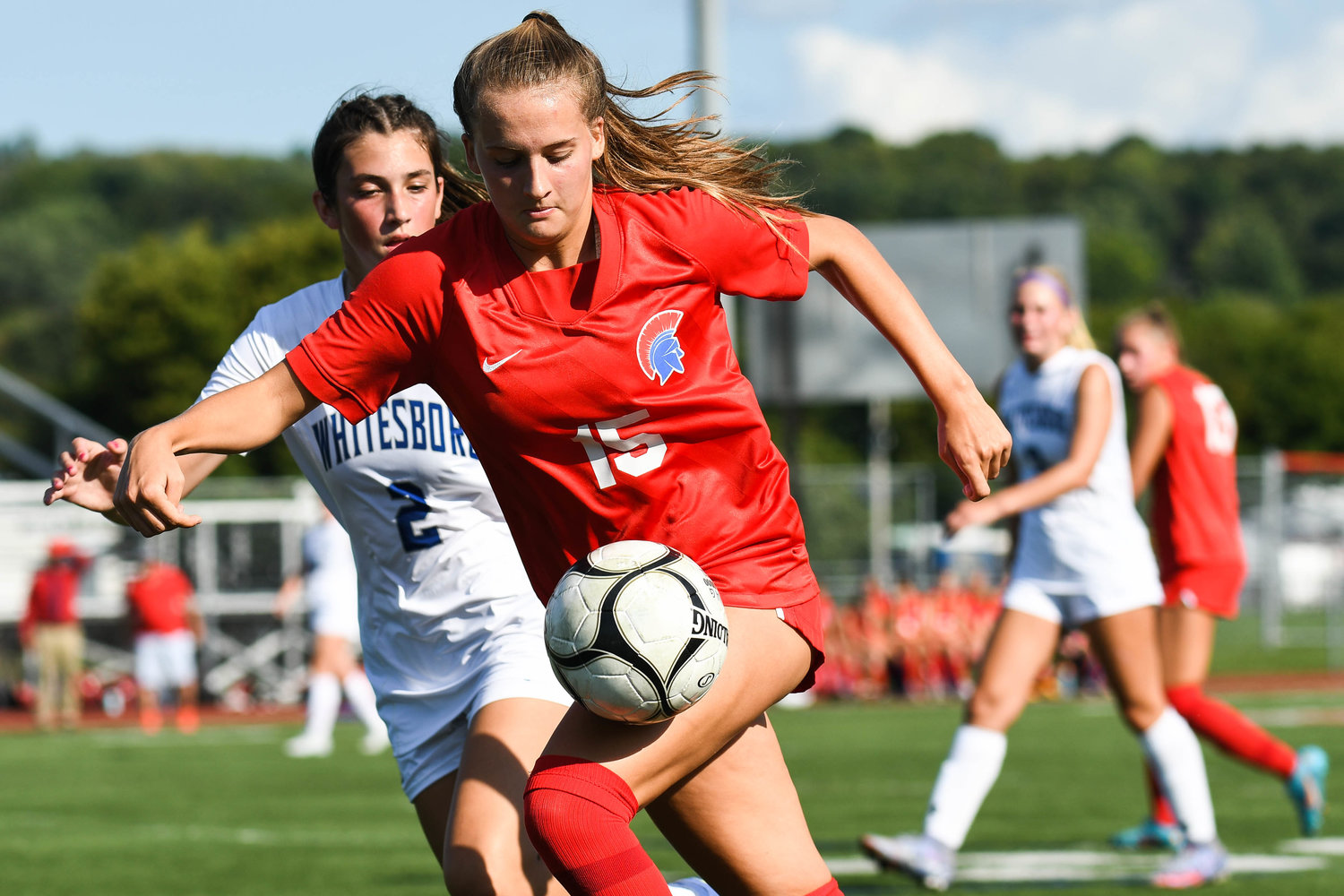 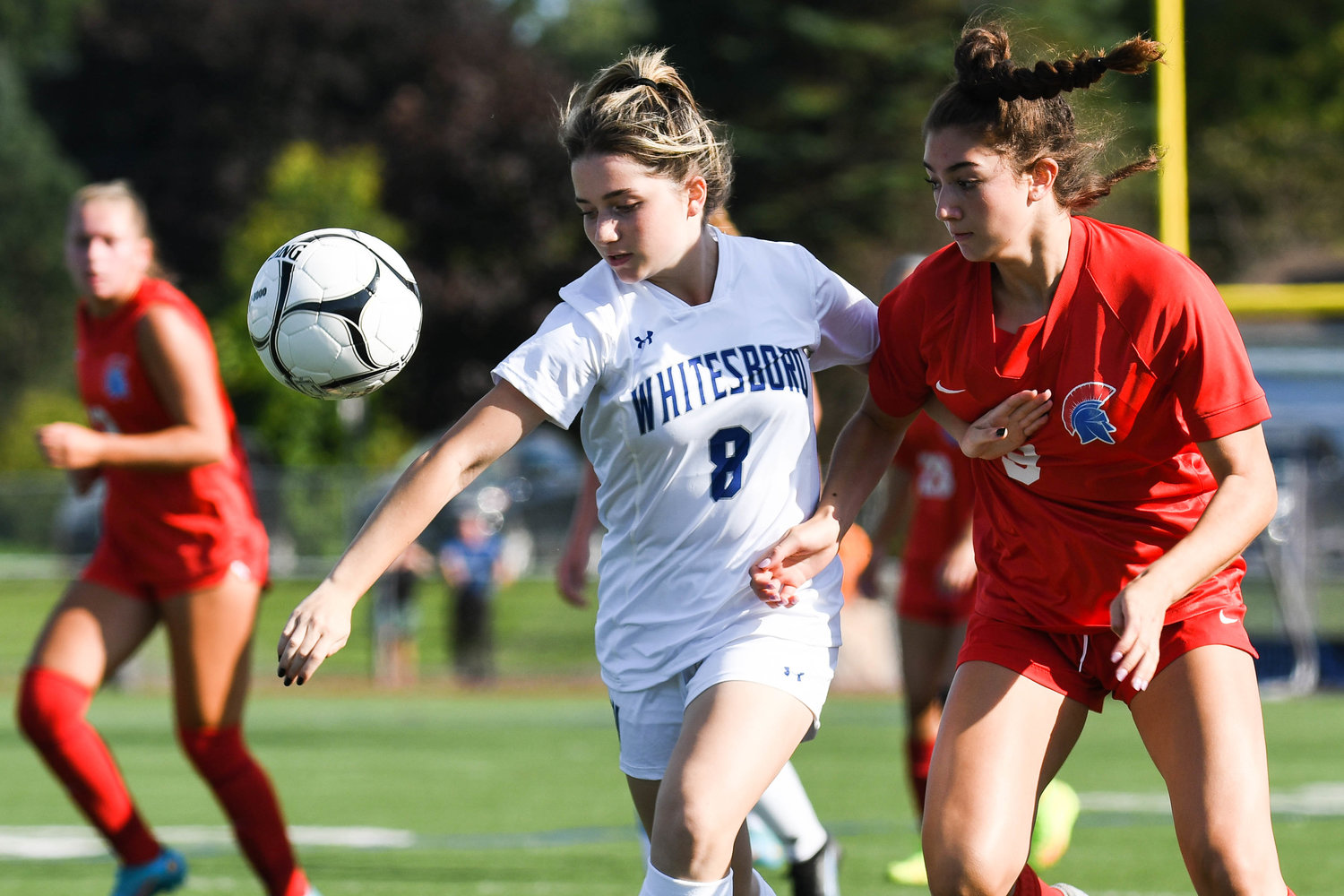 Whitesboro player Ellana Stucchi, left, fights for control of the ball with New Hartford’s Amanda Graziano during the game on Thursday. Graziano scored in the Spartans’ 5-0 win.
(Sentinel photo by Alex Cooper) 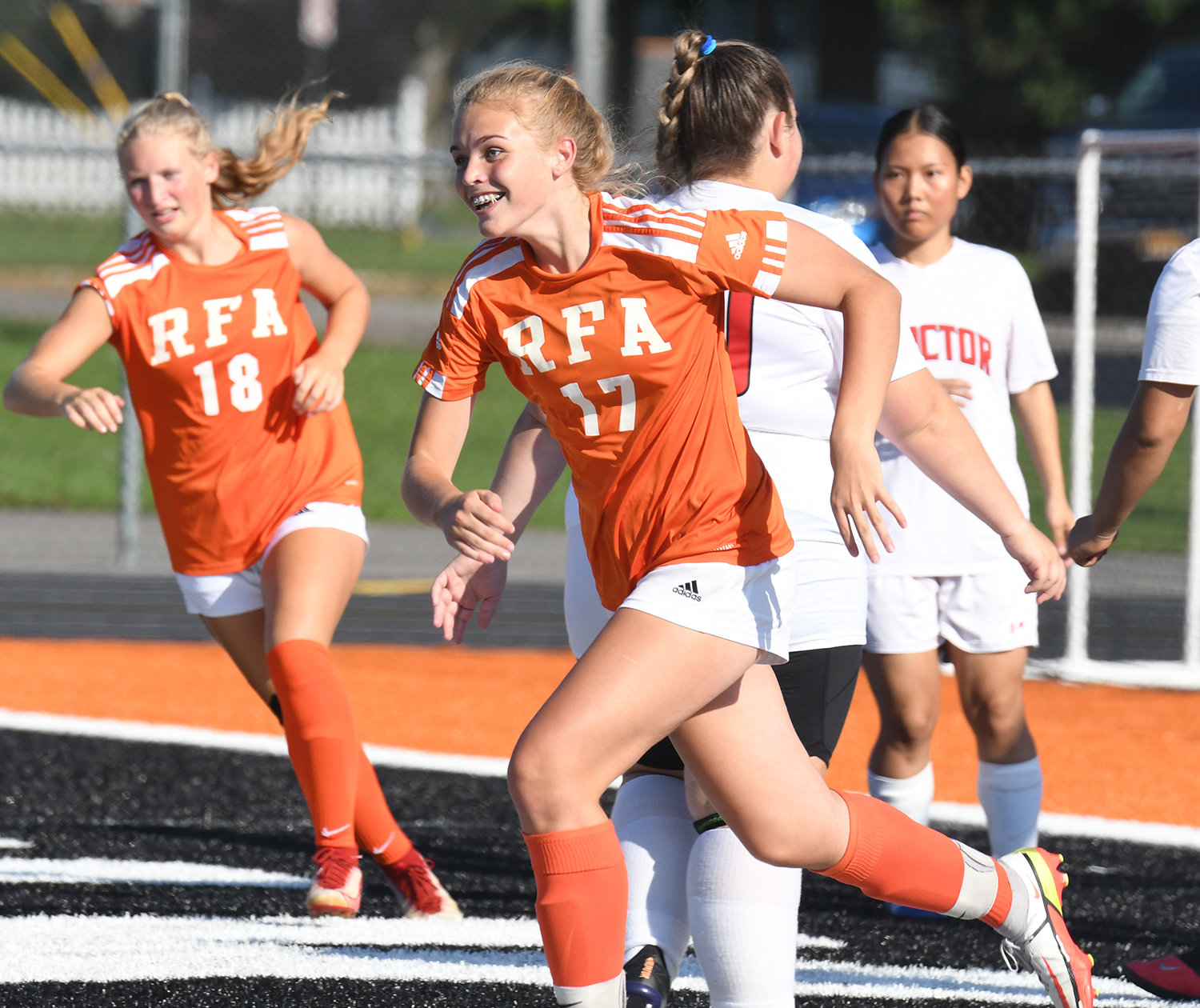 Amelia Furbeck runs away from the goal after scoring Rome Free Academy’s first goal of the game against Utica Proctor Thursday at RFA Stadium. She scored twice and the Black Knights won 10-0.
(Sentinel photo by John Clifford) 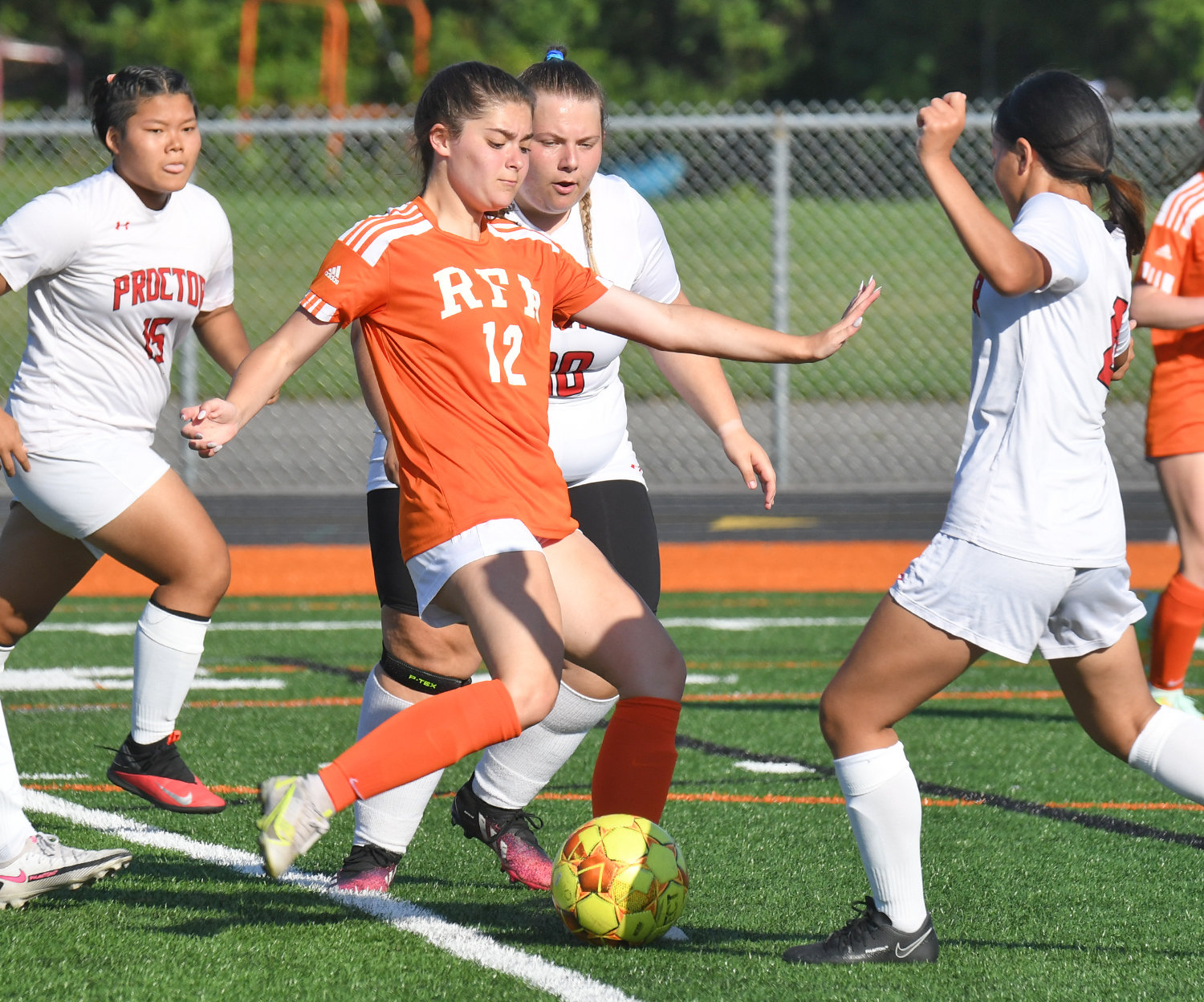 Brooke Frawley unleashes a shot to score the second goal for Rome Free Academy against Utica Proctor Thursday at home. Surrounding her, from left, are Hser Eh Ler Paw, Nadina Gacic and Kimani Thomas. Frawley also had an assist in the team’s 10-0 win.
(Sentinel photo by John Clifford) 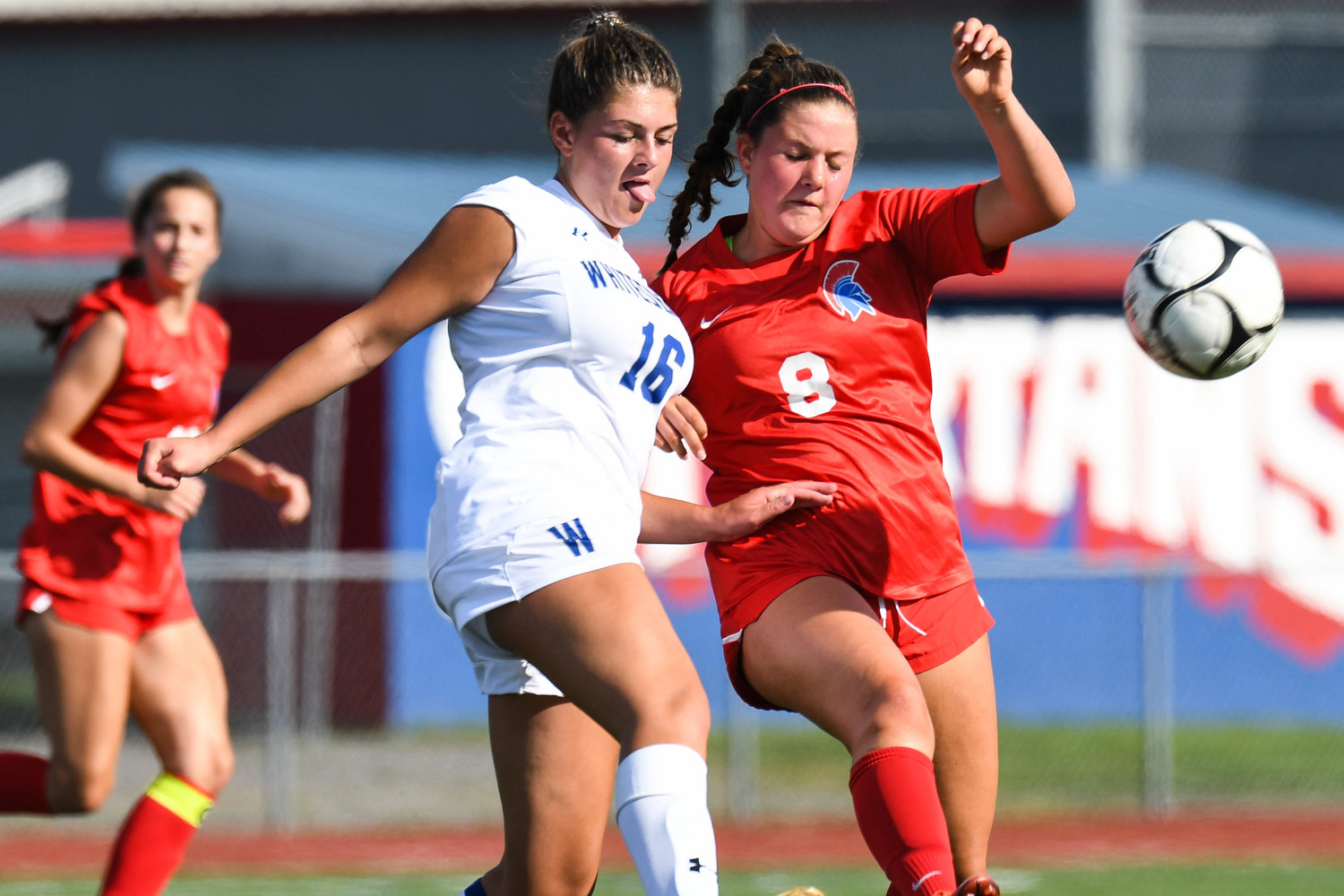 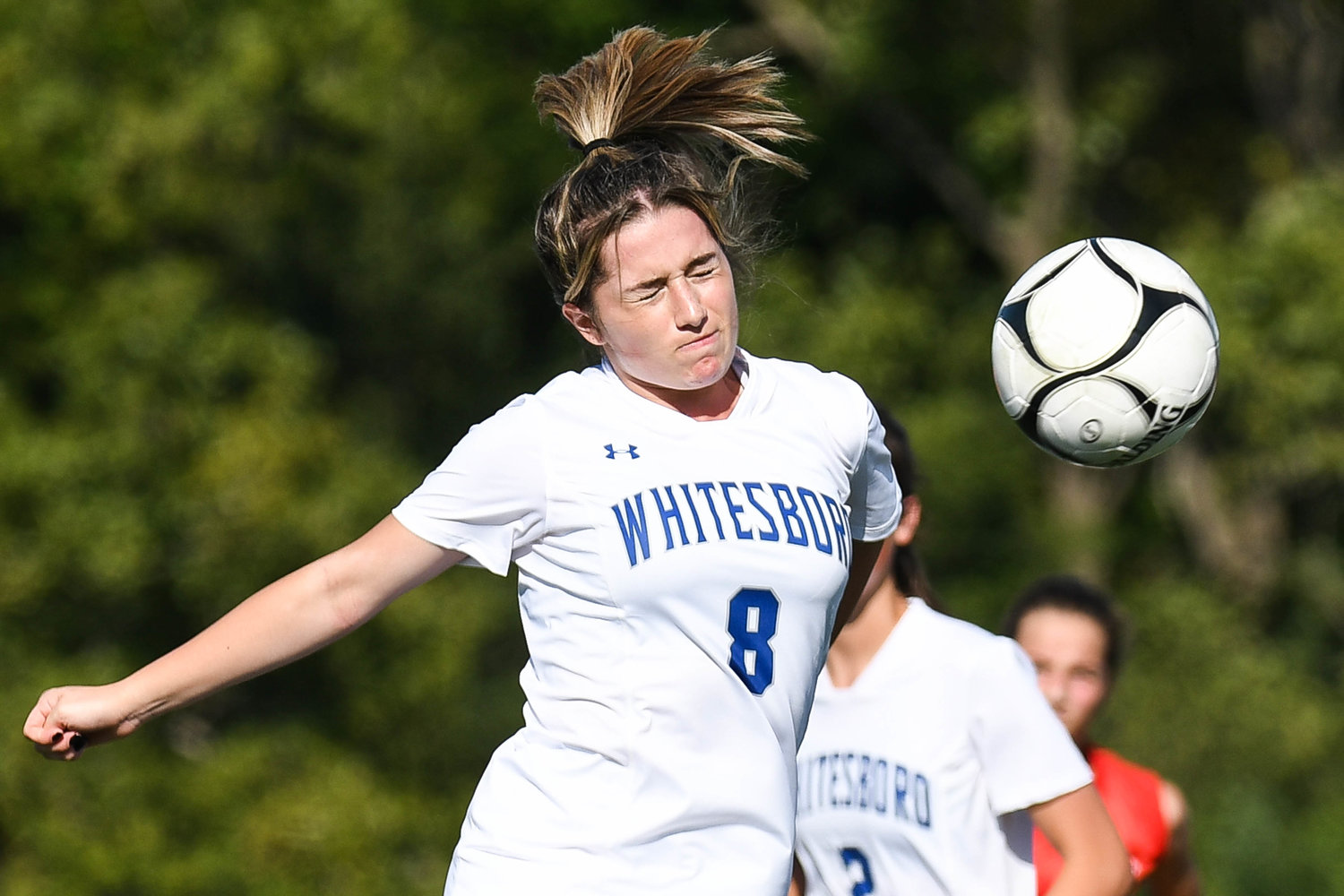 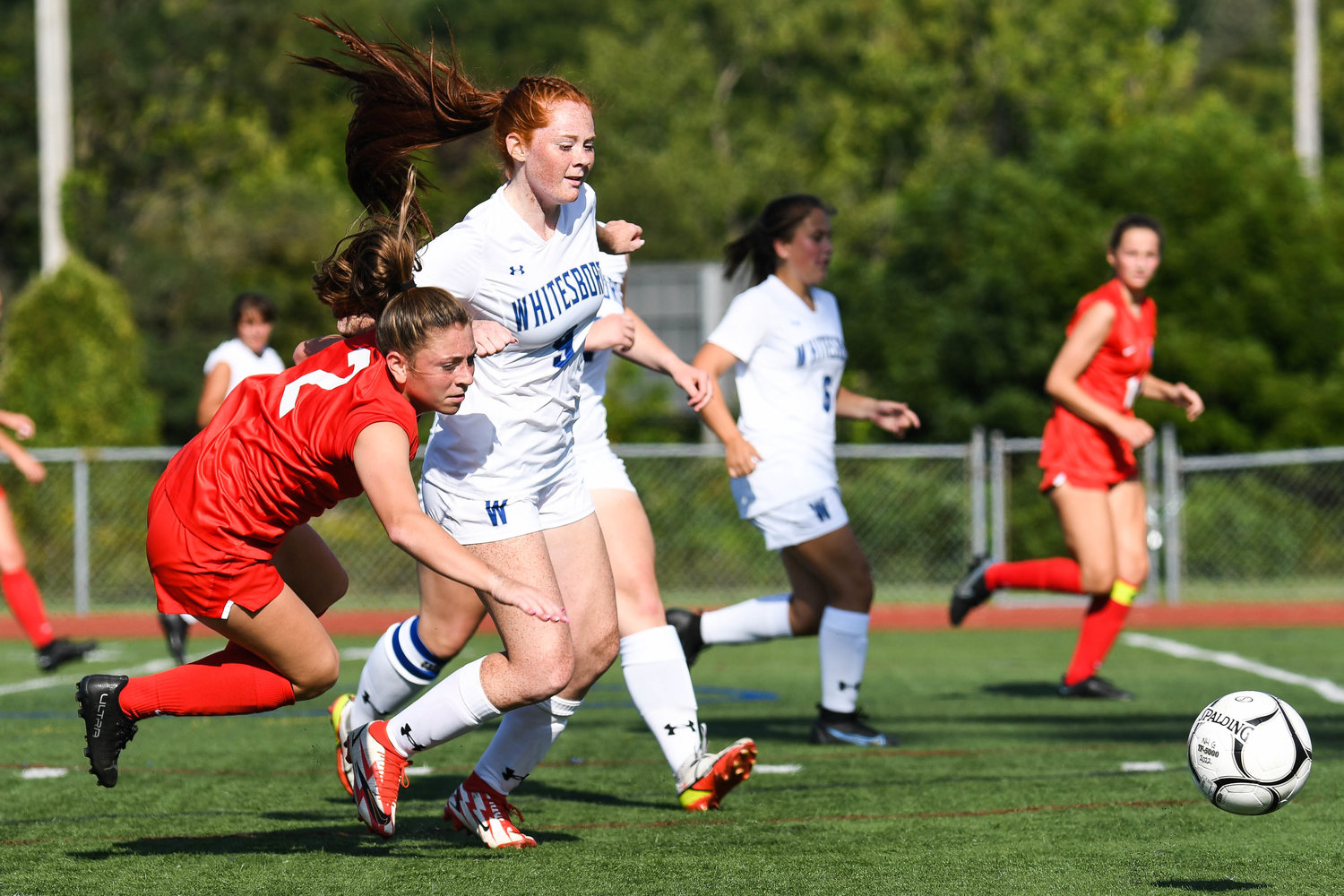 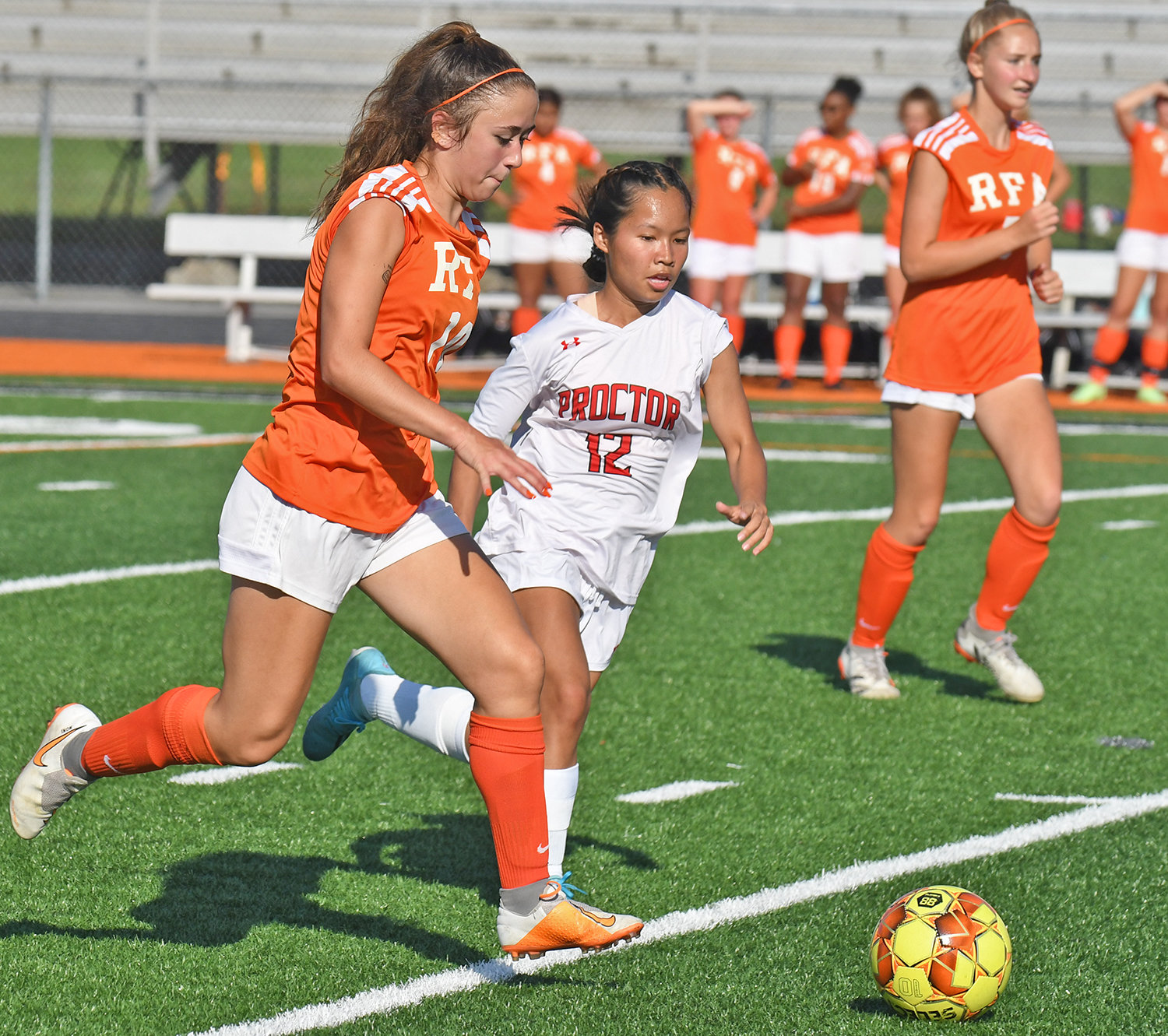 Rome Free Academy's Antonia Schillaci, left, sprints upfield to control the ball while challenged by Proctor's Nancy Shine during the first half of Thursday night's game at RFA Stadium. The Black Knights won 10-0 and Schillaci had two assists.
(Sentinel photo by John Clifford) 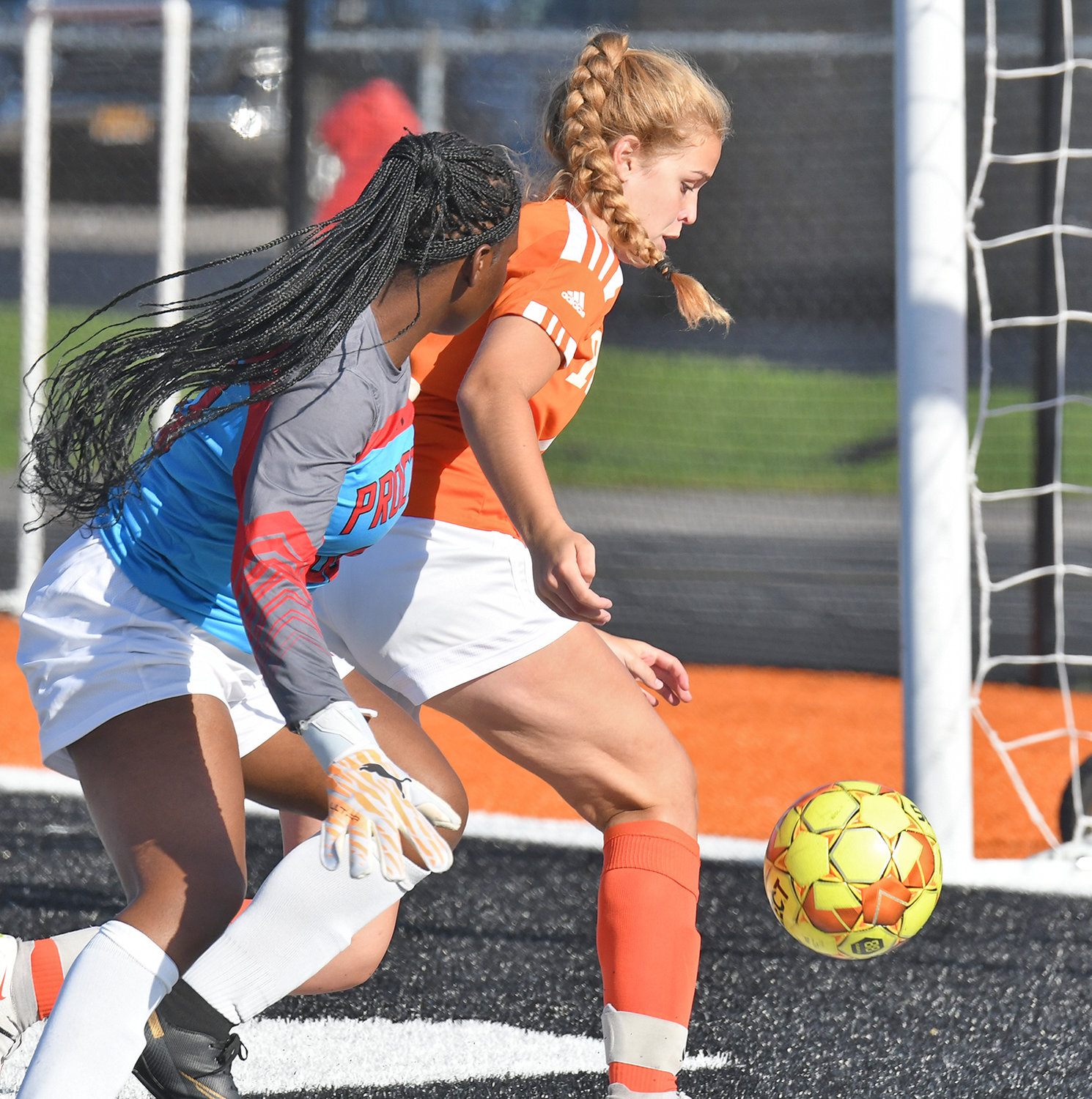 The New Hartford girls soccer team scored all of its goals in the second half in a 5-0 win at home over Tri-Valley League foe Whitesboro Thursday. The win extends the defending Class A state champions’ win streak to 40.

Savannah Cole stopped both shots she faced in goal for New Hartford to earn the shutout.

The Rome Free Academy girls soccer team won 10-0 against visiting Utica Proctor on Thursday at RFA Stadium, with nine players scoring at least a goal each in the TVL match.

McPheron and Miranda McCormick made a save each for RFA in split time in net.

Statistics for Proctor were not provided.

Proctor is at Vernon-Verona-Sherrill at 6 p.m. Tuesday in the league.

Red Devils pile on the goals

The Vernon-Verona-Sherrill girls soccer team scored a 9-0 win at Utica-Notre Dame in the Tri-Valley League Thursday.

Laiken Kiser led the way with a hat trick and an assist. Sofia Sherwood and Julia Carter each had a pair of goals. Eva Croft and Anna Petersen had a goal and an assist each.

Emma Dam made one save in net for VVS.

Statistics for Notre Dame were not submitted.

VVS hosts Proctor at 6 p.m. Tuesday in the TVL.

Notre Dame will participate in the Tournament at Waterville Saturday.

The Utica Proctor boys soccer team broke a scoreless halftime tie with three second half goals to defeat RFA at home on Thursday in the TVL.

Siidahmed Somow tallied two goals for the Raiders and Ervin Ruznic added one as well. Alan Catic and Amir Halilovic had an assist each in the win.

Asim Gacic made 10 saves and Nidal made one to combine for a shut out.

Jack Tamburino scored 49 seconds into overtime to give the Westmoreland-Oriskany boys soccer team a 2-1 victory over host Vernon-Verona-Sherrill Thursday in a non-league contest.

Jesse Sweet of Westmoreland-Oriskany scored in the first half.

VVS’ Dan Merrill tied the game in the second half with an assist for Ryan Mumford.

David Cronauer made five saves in net to earn the win.

For VVS, Logan Fisher had three saves and Ryan Mitchell had two in split time.

The Bulldogs improved to 2-0 and host Frankfort-Schuyler at 1 p.m. today in non-league play.

Sauquoit Valley soccer player Nicholas Giuliano scored all four of his team’s goals in a 4-1 win at Canastota Thursday in non-league play.

Aaron Johnson, Colin Jones and Lucian Thompson each tallied an assist in the win.

Alex Prichard made 10 saves in goal for Sauquoit to earn the win.

Connor Russell made 13 saves for Canastota.

Canastota will play host to Little Falls at 7 p.m. Wednesday in the Center State.