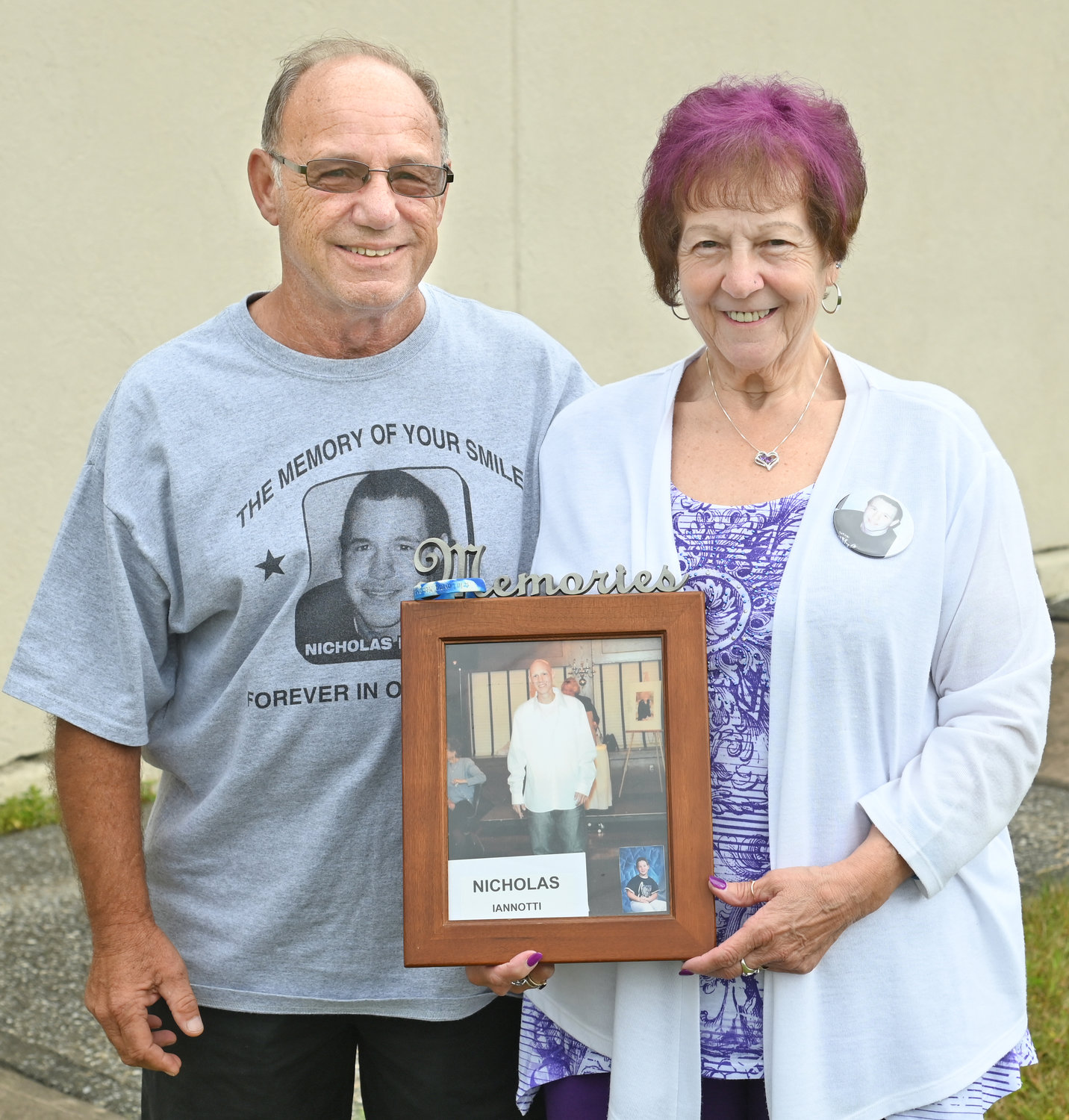 BEAUTIFUL MEMORIES — Randy and Linda Iannotti stand with a photo of their son, Nicholas Iannotti, age 20, wearing his favorite white shirt from the Timeless Stars Fashion Show at The Beeches back in 2006, which formerly raised money for the Mary Kay Foundation. Nicholas passed away from Ewing sarcoma back in November 2006.
(Sentinel photo by John Clifford) 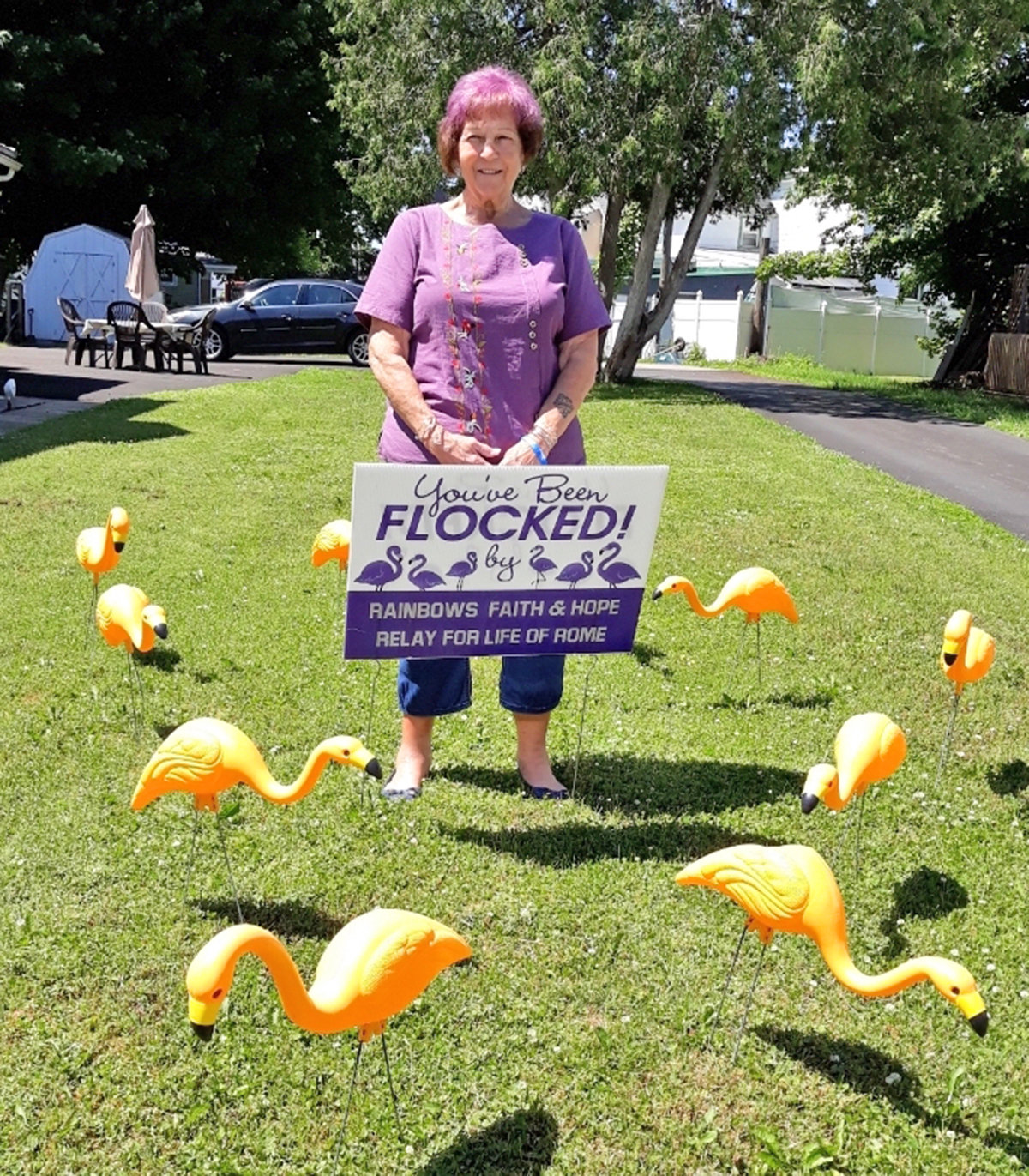 SUPPORTING THE CAUSE — Linda Iannotti, 413 Floyd Ave., stands in her yard with the yellow flamingos she was “flocked” with during the American Cancer Society Relay for Life of Rome Team Rainbows of Faith & Hope fund-raiser. Each year the Relay for Life team “flocks” different neighbors’ yards, who give a donation toward the American Cancer Society before the flock is moved elsewhere. Iannotti and husband, Randy, lost their son Nicholas to bone cancer at the age of 20 back in November 2006.
(Photo submitted)
Previous Next
Posted Saturday, November 6, 2021 11:10 am
Nicole A. Hawley
Staff writer
email

“He will always be with us.”

Nicholas Iannotti was only 18-years-old when he was diagnosed with Ewing sarcoma, a bone cancer known more commonly to strike young boys and girls. He fought two years, going to Upstate University Hospital in Syracuse for treatments before succumbing to the disease on Nov. 25, 2006.

Today Nicholas’ parents Linda and Randy Iannotti, 413 Floyd Ave., keep the memory of their child alive through special family traditions and taking part in the American Cancer Society’s Relay for Life of Rome.

Ewing sarcoma is a rare type of cancer that occurs in bones or in the soft tissue around the bones. It most often begins in the leg bones and in the pelvis, but it can occur in any bone. Less often, it starts in the soft tissues of the chest, abdomen, limbs or other locations.

“It was rare in Nicholas’ case because usually it’s a cancer with a younger diagnosis of between the ages of 8-10, so it was rare that he would be getting it at 18,” said Nicholas’ father, Randy Iannotti.

Mother Linda explained that when Nicholas was around 8-years-old, he suffered from a sickness in his back that doctors at the time diagnosed as a blood infection.

“No doctor would confirm that that and his cancer were related — both were in the same spot — but he also had different doctors,” Linda said.

When Nicholas got sick again at age 18, “They tested him for everything — he was in pain and they told us if it was cancer, most likely he wouldn’t be in pain, so we were floored when they came back and said it was cancer,” Randy said.

Nicholas was referred to Upstate Cancer Center, where he was taken under the care of Dr. Bernard Poiesz. Syracuse was recommended for Nicholas’ treatment so that he could be closer to his family and friends, Linda said. At the beginning of his treatments, the mother explained that her son would be in-patient at the hospital for three days, have two weeks of being at home, and then he would be back at the hospital for another week’s stay.

“I would stay with him at first even though he was 18-years-old at the time, I didn’t want him to be alone,” Linda said. “Then his girlfriend at the time, Donna, would come take good care of him if I wasn’t there.”

When Nicholas had to stay for treatments in the hospital’s cancer wing, “The nurses and aides just doted on him — he was their first 18-year-old and the youngest cancer patient they had.”

But being a rebellious teen-ager, Linda said Nicholas grew tired of his treatments and hospital stays, yet the nurses made sure he kept on track.

“One day he said I’m not doing this, I’m going home and the nurse called me and said they couldn’t make him stay because he was 18,” but they were able to calm him down, Linda said.

“There were sometimes, being a typical teen-ager, he was just like, ‘I don’t want to go through with this,’ so we would tell him he needed to keep fighting,” said Randy.

Nicholas began his treatments in December of 2004 and Linda said she stayed with him during the first two months and was grateful that some of her son’s elderly roommates, who were also receiving cancer treatments, were fine with her staying in the room.

“But then Nicholas got comfortable with his nurses and they were taking such great care of him there, so he’d say, ‘Mom you don’t need to stay,’” Linda recalled.

“Then I got replaced with his girlfriend Donna. She took even better care of him,” the mother laughed.

Nicholas would go into remission in December of 2005, but the cancer returned the following April.

In October 2006 while still undergoing treatments, Nicholas took part in the Timeless Stars Fashion Show at The Beeches, started by Mary Kay consultant Sandi L. Palen, featuring cancer survivors, in order to raise money for the Mary Kay Foundation. Nicholas and his family met Palen while participating in the Relay for Life of Rome that year.

Nicholas was able to choose outfits from the rue21 store and he presented a pink carnation to mom Linda, her favorite flower. Linda said after Nicholas passed, his brother Jarett went back to purchase Nick’s favorite white shirt he wore during the fashion show for his burial, but store employees told Jarett he could have it.

A blown up 8-by-10 of that photo featuring Nicholas in the white dress shirt from the fashion show, sits inside a “Memories” frame on top of the Iannottis’ dining room table.

As Nicholas neared the end of his life, the Iannottis made the difficult choice of keeping him at Upstate Cancer Center where doctors, nurses and aides took care of him like family. Dr. Poiesz recommended not moving Nicholas to another hospital or into hospice care, and keeping him off a ventilator so they could keep him comfortable. About 2-3 times a day, Randy would walk his son down to a patio area at the hospital where the two enjoyed each other’s company for a half hour to an hour outside.

“That would be my time when I stayed in his hospital room and just screamed and cried,” Linda recalled. “The nurses were good enough to let me know when they knew Nicholas was coming back, so I would just gain my composure before he made it back to the room.”

The nurses and hospital staff grew so close with Nicholas, that Linda said they had counselors for them on call in case they were needed when he did pass away. Employees were also advised to call in before their shift started so they could be informed before their arrival to work.

“They were such wonderful people working on that floor, they even came from Syracuse to Nicholas’ calling hours and even to the funeral service,” Linda said.

During his hospital stay, Nicholas also got to be friends with another patient named Stephanie, who was his age and suffered from the same type of cancer. For Nicholas’ last Thanksgiving, Stephanie promised to return to the hospital so they could spend the holiday together watching their favorite football team, the Dallas Cowboys.

“She told Nicholas, ‘I’ll be back and we can watch the game together,’ and Nicholas was like, ‘You’re crazy, why would you want to come back to the hospital?,’” Linda remembered. “But she came back and so did Donna (Nicholas’ girlfriend at the time) — all three got to be friends and they all ended up in the hospital bed watching the game together.”

She said, “Those last six weeks, Randy and I never left the hospital. Nine months later, Stephanie passed away.”

On the day Nicholas passed, “We were right there watching TV. He coughed a few times, then closed his eyes and he just went,” said Randy. “It was very peaceful.”

It was because of that heartfelt gesture on Thanksgiving that when Stephanie was nearing the end of her life, Linda came to visit her at the Syracuse hospital following her son’s death. And during that time, the Upstate Cancer Center nurses continued to show their support and compassion for Linda.

“It took all my strength to go to that hospital, but the nurses all came out and told me not to worry, that they wouldn’t have me pass the room where Nicholas stayed,” she said. “Then they all escorted me down to Stephanie’s room.”

Although it’s been almost 15 years since his passing, the Iannottis continue to see the memory of their son live on in others. His former girlfriend Donna is now married and has two children of her own, but remains close and in touch with the family.

“She said he’s always with her,” Linda said of Donna. “She even invited us to her wedding and we were happy to see her moving on. Nicholas would be happy for her.”

Despite Linda never liking tattoos, she actually gave in on the first anniversary of Nicholas’ death and had gotten one placed on her left wrist in her son’s honor.

“Nicholas was always kind of a rebel and he would say, ‘As soon as I turn 18, I’m getting a tattoo,’ but then when he started cancer treatments, the doctor said he couldn’t,” said Linda. “He never was able to get his tattoo, so I got one for him. It’s his headstone and says, ‘Forever in our hearts,’ with two teardrops — one is Nicholas’ birthstone.”

The tattoo also features a butterfly, “because that’s the sign of eternity,” she said.

Then some years back, the Iannottis heard of a young woman who had gotten her own tattoo in honor of their son — she and Nicholas had been friends back in school. By chance, Linda visited her beautician recently and was discussing different hair dyes with the salon manager, who just so happened to be the tattooed girl they had been searching for.

“She tattooed Nicholas’ name with angel wings across (the top of) her back,” Linda described. “We finally found her. What are the chances of that?”

Linda and Randy also explained that while Nicholas was a young boy, the family took in his friend Jeremy who came from a broken home. The two grew close like brothers, and Nicholas’ memory lives on in Jeremy’s son. Today, Jeremy’s Nicholas is in seventh grade, and recently the family invited the Iannottis to their son’s first Major League Baseball game — seeing the New York Yankees play the Boston Red Sox down in the Bronx.

Linda explained that she was reluctant in attending the game at first, seeing it was on Aug. 18 — Nicholas’ birthday, but son Jarett encouraged his parents to go. Instead of gathering at the family home to light lanterns, Jarett said Nicholas would have wanted them to be at that game. In the meantime, brothers Jarett, Matthew and Patrick kept their tradition of visiting Nicholas’ grave and sharing a beer.

As for their son’s friend, “Jeremy came to us before his son was born and asked if we were OK with him naming his son Nicholas. He said, ‘I want to name my son after my brother,’” said Linda with tears. “And he may not be blood, but Nicholas is our grandson.”

Linda said a cousin also named his child Nicholas in their son’s honor, so Nicholas has two namesakes.

“He made an impression. He’s been gone 15 years in November, but he’s still part of our lives,” the mother said. “He was just the kind of person that as soon as you met him, you liked him. He will always be missed.”