Solar array starting to make the grade for Camden district

CAMDEN — Nearly four months after it began operating, a Camden school district solar energy project is generating some financial savings and its output is expected to perk up with the changing …

Solar array starting to make the grade for Camden district 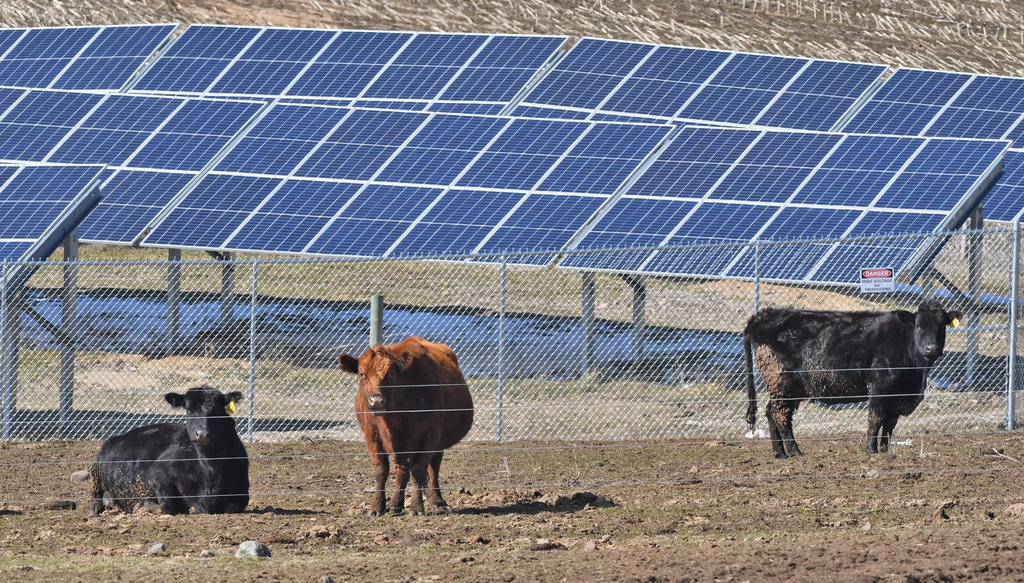 CATCHING SOME SUN — A new Camden school district solar farm project off Route 69 has begun generating financial savings for the district. Some of the project’s solar panels are shown here, while in front of the fence are cows from a neighboring farm who are also receiving the sun’s rays that have been in short supply in the area lately. (Sentinel photo by John Clifford)
Posted Monday, April 16, 2018 4:00 pm
Dave Gymburch
Staff writer
email

CAMDEN — Nearly four months after it began operating, a Camden school district solar energy project is generating some financial savings and its output is expected to perk up with the changing season.

While monthly kilowatt amounts through February were “all below average,” the energy output is “picking up now as days get longer” at this time of year, district Assistant Superintendent for Business Karl Keil Jr. told the Board of Education Tuesday night.

“Our savings are starting” was the message on one of the slides in Keil’s presentation to the board on the solar farm project, which went live on Nov. 17.

The district’s net savings on energy costs so far have totaled about $6,000, he said after the board meeting; the savings relate to the district’s payments for energy generated by the solar farm, coupled with credits on its regular utility bills.

By summer, the output should “start to go up” and the district should “really see credits to our bills,” Keil noted during his presentation. The “numbers seem to be working out,” which is “good news” for the school district’s budget, taxpayers and students, he observed.

The district is looking for the project to produce 2,500 megawatts for the year, said Keil, and has “a lot to make up” at this point. The project had produced 509 megawatts as of last week, which is equal to the energy consumed by 32 houses each year, according to his presentation.

The current 2017-18 school district budget, for the school year concluding June 30, has estimated $20,000 in partial-year savings stemming from the solar project, said Keil, adding there is still a chance to reach that amount. The upcoming 2018-19 budget includes a savings impact of $55,000, and the savings potentially could approach the $80,000-$100,000 range “if we have a really good year,” he remarked.

The conclusion of Keil’s presentation included a slide asking “who is primarily responsible for savings for out taxpayers from the solar farm going forward?” In answering, he said “now we need Mother Nature to cooperate,” adding that the district needs “lots of sun” which will lead to “more power for the system.”

The project is an “opportunity to save money for the district” and to “support renewable energy,” Keil commented.

The district launched the project with the help of an approximately $974,000 state grant that was awarded in 2014 in conjunction with the New York State Energy Research & Development Authority (NYSERDA).

The district has a 20-year
lease with the village for the land for the solar farm, and has estimated that total savings over 20 years will be in the $2 million range.

School board member Tyler Henry asked about the district’s costs for the project. The district had “no infrastructure costs up front,” said Keil. The district spent about $4,000 up front on legal-related fees, but has “no money invested in infrastructure,” he remarked. It is all part of the initiative offered by the state and NYSERDA, he added.