Assemblyman Robert Smullen and Assemblyman Brian Miller, joined with several of their fellow Republican state lawmakers at a press conference on what they contend are the failures of bail reform in New York. 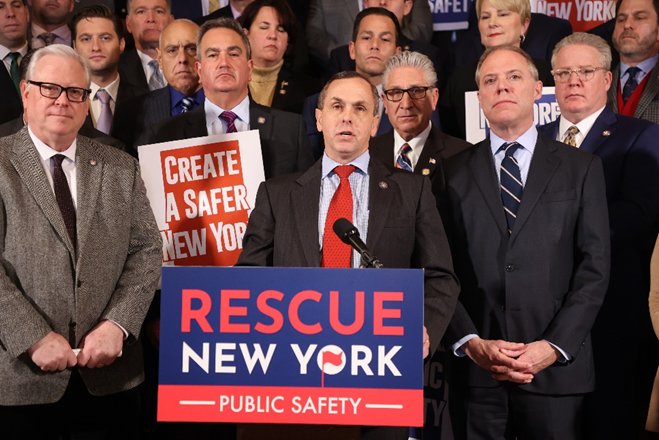 ALBANY — Assemblyman Robert Smullen, R-118, Meco, and Assemblyman Brian Miller, R-101, New Hartford, joined with several of their fellow Republican state lawmakers at a press conference on what they contend are the failures of bail reform in New York.

Smullen spoke about the murder of John Lee last year by an individual who was released from police custody because of the state’s bail reforms.

“The atrocity of John Lee’s murder by an individual who should have been behind bars will not go unnoticed by our (Republican) conference,” said Smullen. “We must keep violent repeat offenders off our streets and away from our loved ones. The 2019 bail reform laws are the reason for the tremendous escalation of crime in our state and they need to be repealed immediately.

“We also need to return judicial discretion to our court rooms. The power to determine the length of incarceration should be entirely up to the presiding judge. This is a common-sense but vital fix to our revolving-door criminal justice system here in New York.”

Miller also called for judicial discretion to be returned to our courts, which would allow judges to hold the most violent of defendants and those who commit repeated crimes, due to a lack of immediate consequences.

“Bail reforms have failed New Yorkers by making our state more dangerous and leaving many families with heartbreaking consequences. The Legislature must look at all of the solutions on the table, especially the return of judicial discretion, to hold violent defendants,” said Miller. “We can’t keep avoiding the problems bail reform has created for our state. We must put the safety of the public first.”