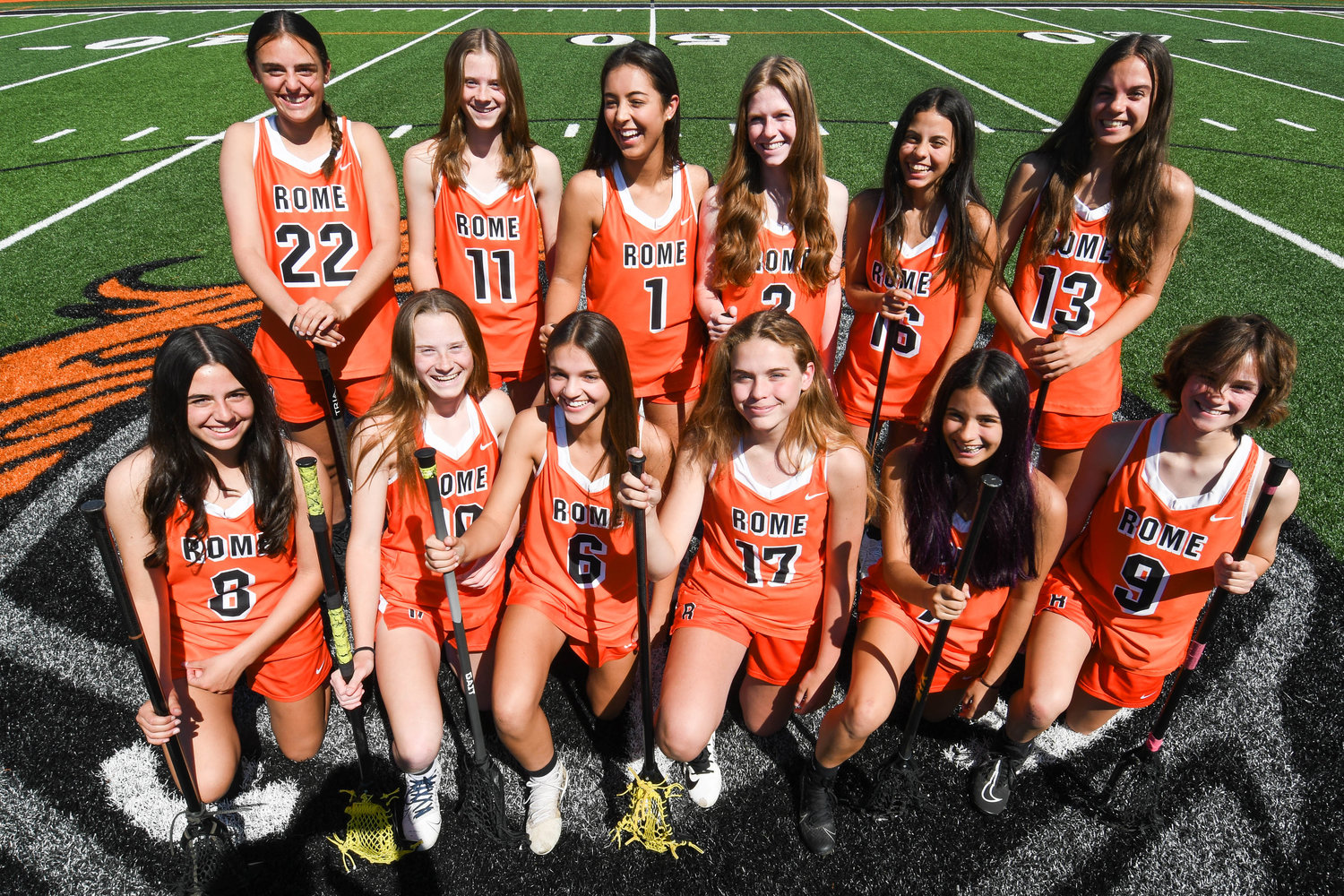 Six sets of sisters play together on Rome Free Academy’s girls lacrosse team. There’s identical twins Fiona and Isibeal McMahon (11 and 10) as well as two other sets of twins — Chase and Shannen Calandra (13 and 9) and Giavonna and Jenavieve Cianfrocco (16 and 7). The other sisters are Danielle and Alyssa D’Aiuto (1 and 6), Brynn and Amelia Furbeck (2 and 17) and Drew and Danielle Kopek (22 and 8).
(Sentinel photo by Alex Cooper) 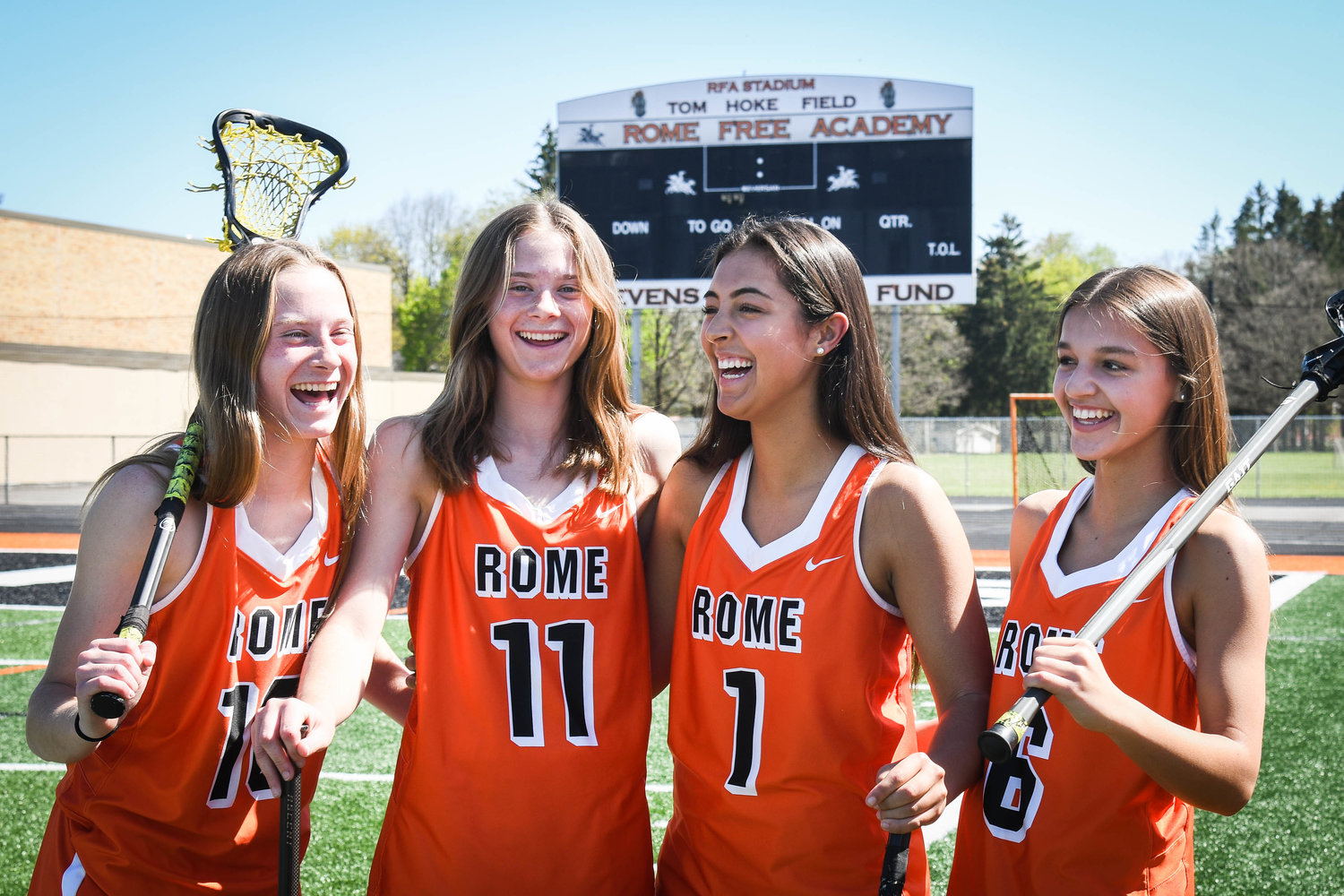 From left, are twins Isibeal and Fiona McMahon and sisters Danielle and Ally D’Aiuto. There are six sets of sisters on the Rome Free Academy girls lacrosse team. The Black Knights are 11-3 overall and 7-0 in the Tri-Valley League.
(Sentinel photo by Alex Cooper)
Previous Next
Posted Wednesday, May 18, 2022 8:00 am
Steve Jones
Sports writer
email / twitter

ROME — If a team can be a sisterhood, the Rome Free Academy lacrosse team is taking that to a whole different level.

The team has six sets of sisters, including three pairs of twins (one of which is identical). That’s just over half of the 23 players on the roster.

“It didn’t really occur to me until a week in,” said first-year head coach Kayla Smith of the curious makeup of the roster. “I don’t think it’s easier or harder,” she said of coaching so many sisters. “They’re all individuals. They all play their individual games no matter what.” Smith said one thing that helps is the girls’ natural sibling rivalries.

Only identical twins Fiona and Isibeal McMahon play the same position among the sets of sisters.

The other twins are Chase and Shannen Calandra and Giavonna and Jenavieve Cianfrocco. They’re all juniors.

“On the field I don’t see them as the D’Aiuto sisters or the McMahon twins,” Smith said. “They’re all individual players when they step out there.”

“I think it’s special to have so many sisters. It makes us one big family. It’s our connection and chemistry that hopefully will help us win the Tri-Valley League,” said Danielle D’Aiuto. She and her sister have played lacrosse and soccer together for years, often on the same team.

“We’re all super close,” Alyssa D’Aiuto added. “Danielle and I have always been so close, that’s why it’s been so fun.” Her sister nodded in agreement: “You’re teammates all the time.”

The McMahon twins have always been on the same team in field hockey and lacrosse. “It’s weird doing something without each other,” said Fiona. And they’re both “super competitive,” Isibeal noted.

How competitive? Just ask them who has more goals. Fiona snaps off the answer immediately. She has more — 18 to 11 as of last weekend.

For Isibeal, the connection makes playing on the same team better. “It’s easier to pick up what they’ll do.” And that extends to their time off the field too, the twins agreed. They “help each other get better and work on our mistakes,” Fiona said. Isibeal added that it’s good to “always have someone to practice with at home.”

Danielle D’Aiuto said the whole team is close. “Every single girl out there is incredible personality-wise. I’ve never met a group of girls so welcoming.”

Isibeal McMahon agreed, saying the team is super close. They have gotten to know “how everyone plays,” and “you can trust them with the ball.” The D’Aiutos nod along, saying “the chemistry” at the same time.

“Even off the field you know how to cheer each other up,” Fiona McMahon said of the sister relationship. For better or worse, “You don’t really get a break from each other,” said Alyssa D’Aiuto.

Fiona McMahaon said one challenge is treating each other like teammates on game day, especially when there’s something you have to “leave on the sideline.”

Danielle D’Aiuto, a midfield player, has 19 goals and 15 assists. Alyssa, a defender, has 13 ground balls and 15 caused turnovers.

Drew Kopek has 30 goals and nine assists at midfield and Danielle has two ground balls and three caused turnovers.

Shannen Calandra has seven goals and three assists. Chase has a goal and an assist, 12 ground balls and 17 caused turnovers.

Amelia Furbeck has six goals and a pair of assists. Brynn has one goal, 23 ground balls and eight caused turnovers.