After delays, construction and site preparation for the downtown Utica parking garage for the Wynn Hospital has begun. 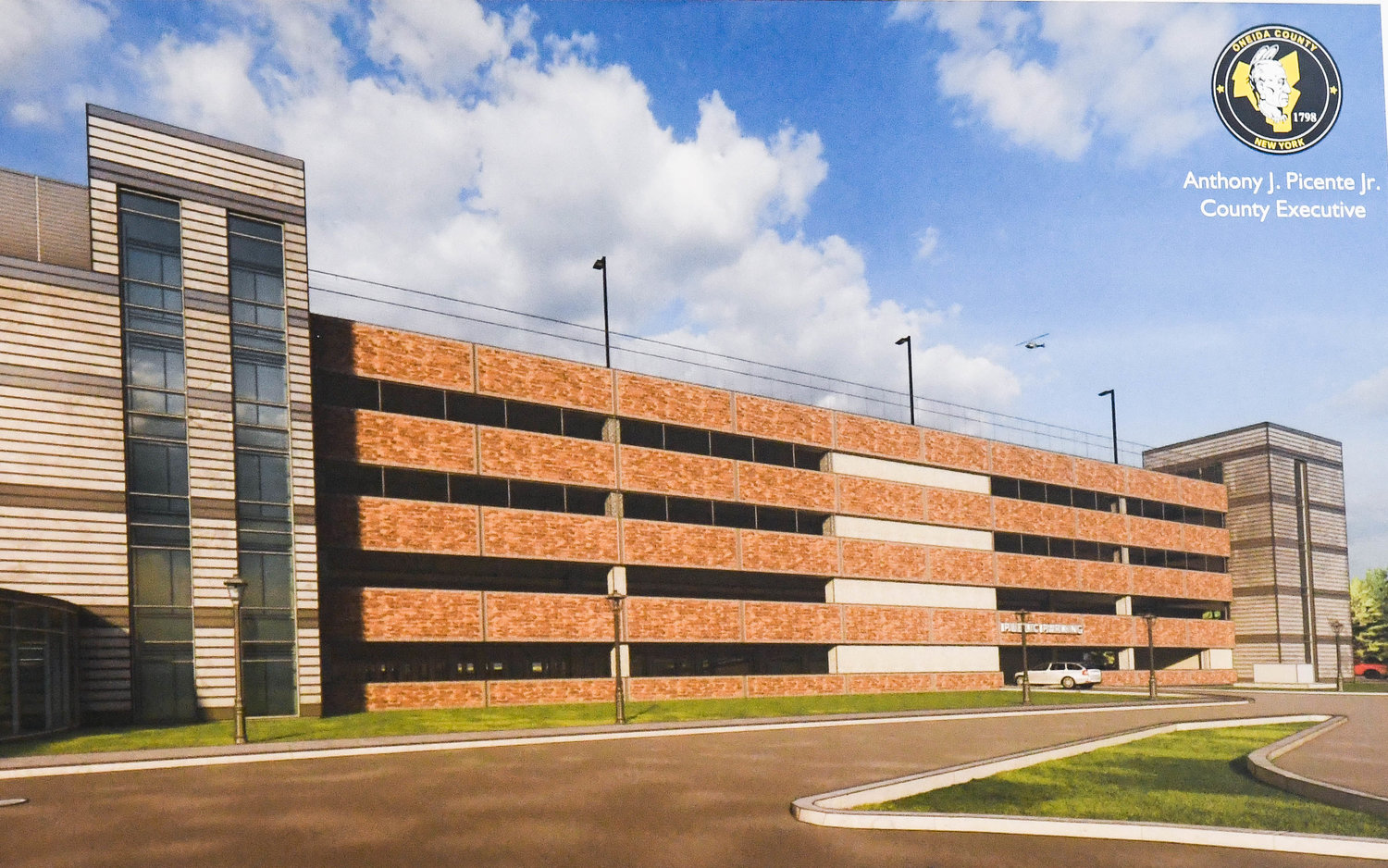 An artist’s rendering shows what the county’s parking garage, which will adjoin the new Wynn Hospital in downtown Utica, could look like. Officials unveiled the rendering during a press conference Thursday.
(Sentinel photo by Alex Cooper) 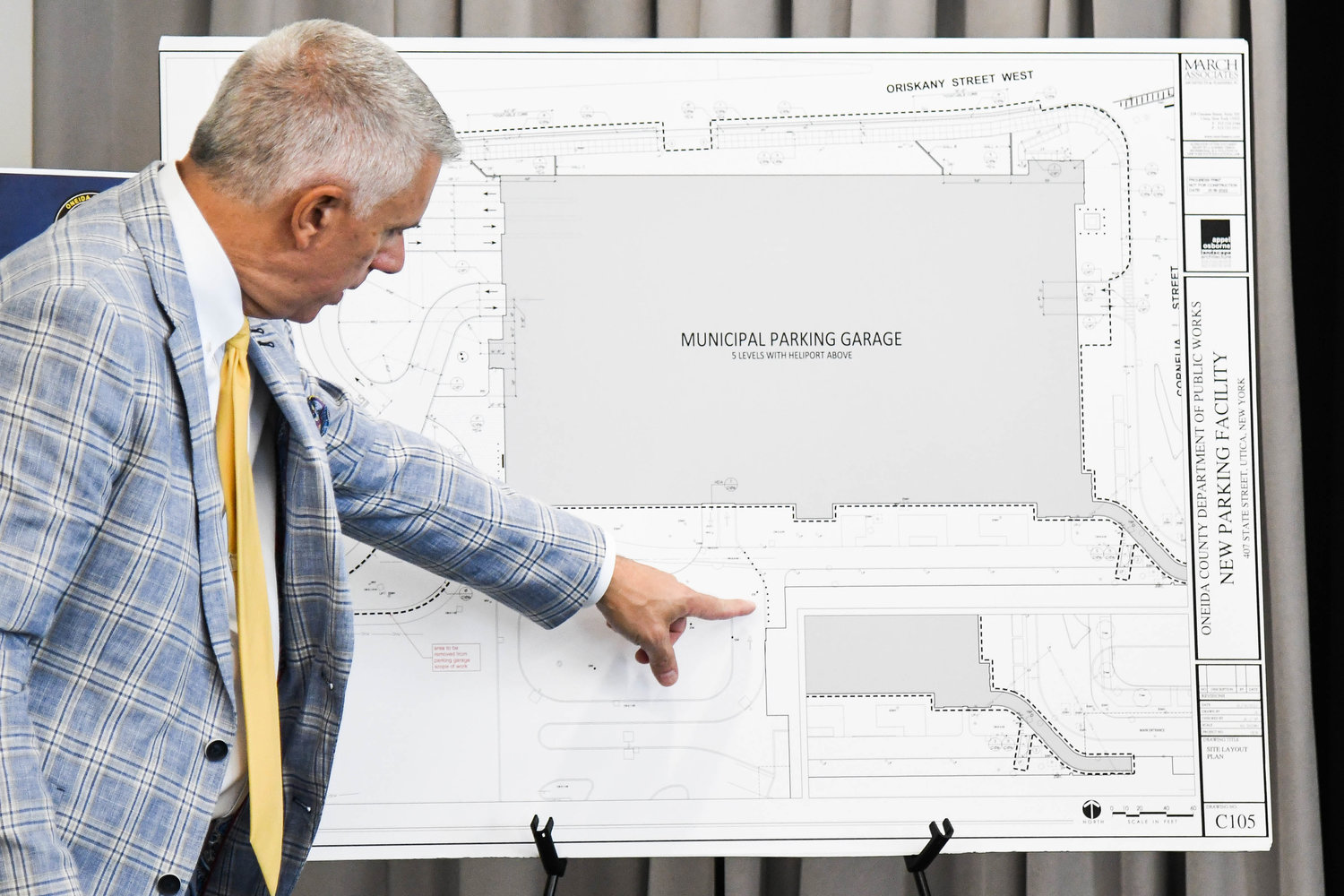 UTICA  — After delays, construction and site preparation for the downtown Utica parking garage for the Wynn Hospital has begun.

Oneida County Executive Anthony J. Picente Jr. said that the parking garage will hold 1,330 vehicles on its five floors, with 1,050 spots dedicated to the hospital and 280 for public parking.

There will be 45 accessible parking spaces for those with disabilities, and 69 electric vehicle charging stations.

There will be no charge for the hospital’s parking spots, but there will be a fee to park in the public spots.

Darlene Stromstad, president and CEO of Mohawk Valley Health Systems, said that MVHS has consistently stated that it will not charge its employees, patients or their families and visitors for parking.

There will be a helipad, along with five elevators and a heated walkway to get patients quickly into the hospital.

Overall, the construction of the garage will cost about $55.8 million, with about $10 million coming from the state of New York, $12 million from American Rescue Plan Act funding, and over $33 million in bonds from Oneida County, which will be paid for over a 30-year period.

Picente said the parking garage was originally supposed to be only four floors, but after a deal with the city of Utica to purchase the Kennedy Garage fell through, a fifth floor had to be added to the structure, adding an additional $10 million to the price tag.

Stromstad said the hospital is going to lease its spaces from the county.

“There have been some timing issues, some delay, but it’s really the taxpayers that suffer at the end of the day,” Picente said.

Picente attributed these delays to a two-year court case between the county and the owners of three parcels of land, which ultimately ended in a judge ruling that the county had the right to file an acquisition map of remaining properties in the garage footprint.

He also cited the delays to the city of Utica’s hesitance to partner with the county to work on the project together.

“Those are facts, and they’re an unfortunate thing that we will deal with,” Picente said.

Stromstad said that any delay in such a large project will cost money, but with the impacts of the COVID-19 pandemic, it is difficult to estimate just how much the cost will be.

“It’s hard to predict in the environment we’re in today about how much that is because of the impact of the worldwide pandemic and the scarcity of some materials,” she said. “All of that has added costs, so to get this going now and keep it moving fast is our best interest.”

Picente said that during the four months that the Wynn Hospital is open and the parking garage is still in construction, the county is making arrangements for parking, especially with the upcoming opening of the Nexus Center.

Stromstad said that for the past several months, MVHS has been discussing how to mitigate the parking issues when the hospital opens, and that space will be made available downtown and there are two other spaces that will accommodate a bussing service for employees.

She said there is more to come about the upcoming parking situation.

Both Picente and Stromstad commented on the aesthetic cohesiveness of the hospital and the parking garage.