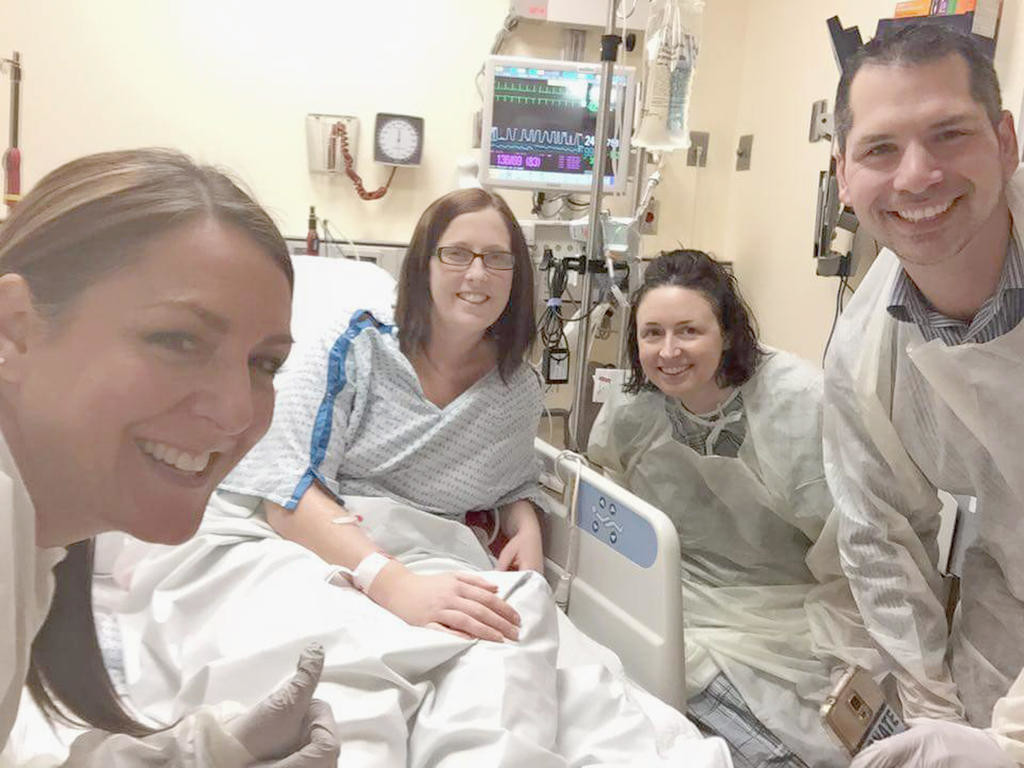 THE GANG’S ALL HERE — Rome resident Tiffany Seoane, in bed, celebrates the beginning of her recovery of a partial liver transplant from her sister, Tara Salerno, to her right. Joining them are Tara’s husband Jacob, far right, and a family friend. The transplant will keep Tiffany alive while doctors research a cure for the bile duct disease which has afflicted her liver. (Photos submitted) 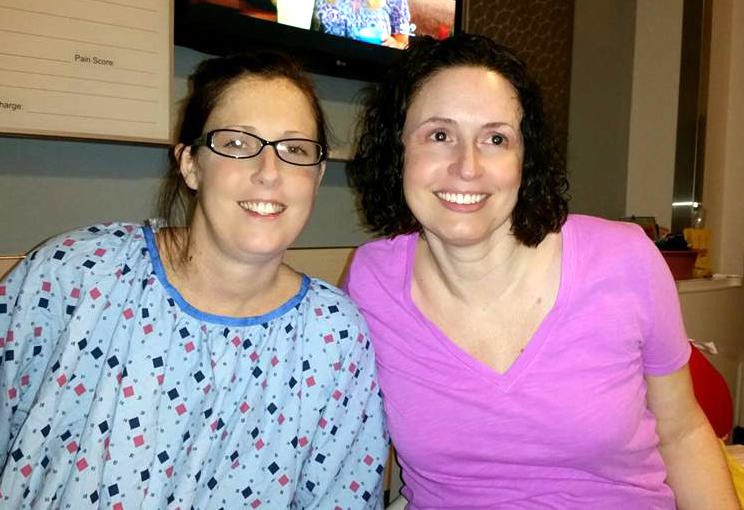 HEADING HOME — Tiffany Seoane, left, and her sister Tara Salerno are all smiles following lengthy surgery and about a week’s worth of rest and observation. Salerno donated the right lobe of her liver and her bile ducts through transplant surgery Jan. 19 to help Seoane combat primary sclerosing cholangitis and is going home. Seoane will remain under observation at New York Presbyterian Hospital for about a month. (Photo submitted) 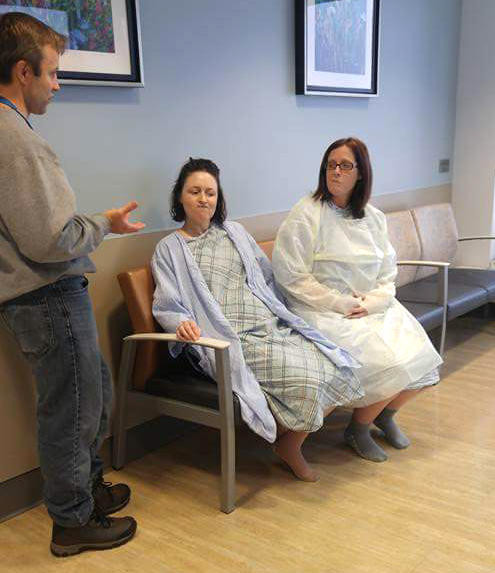 THE FINAL LAP — Tara Salerno, left, and her sister Tiffany Seoane, of Rome, make faces as their post-operation recovery process is explained to them by a surgeon at New York Presbyterian Hospital. The sisters are preparing to come home and renew their lives after Salerno donated the right lobe of her liver to combat the auto-immune disorder that was threatening Seoane’s life. (Photo submitted)
Previous Next
Posted Wednesday, January 27, 2016 4:00 pm
Roger Seibert

Salerno donated the right lobe of her liver to help Seoane in her battle with primary sclerosing cholangitis (PSC), an auto-immune disorder that scars the liver’s bile ducts and leads to liver disorders including liver failure and liver cancer.

Salerno was in surgery for six-and-a-half hours while Seoane, who started an hour after her, was under the knife for nine hours.

Seoane will have to wait in New York for about a month while doctors keep her under observation. Salerno is already back resting at her home in Kingston.

“They want us both up and moving around,” Salerno said. “But no lifting or heavy exercise for me, and they want to be sure Tiffany’s body is not rejecting the liver.”

The goal of the procedure was to replace part of Seoane’s liver that had been damaged by bile fluid build up. Bile is normally secreted into the small intestine from the liver and is used to break down fats and fat-based vitamins for digestion.

Scarring on the bile ducts prevents bile from reaching the small intestine and its buildup in the liver causes the complications associated with PSC.

The operation will enable Seoane to pursue her life goals and care for her family as long s her body continues to accept the transplant.

Seoane had waited two years for the surgery. As the recovery continues she remains in good spirits.

“I have a new day to celebrate next year... My liverversary, Jan. 19!!” Seoane wrote on her Facebook page.

Seoane’s illness has not kept her from living her life; she is married with two sons and earned a nursing degree from Mohawk Valley Community College’s Rome campus this past spring.

And she will be able to work as a nurse, with certain restrictions.

“She won’t be able to be around sick people,” Salerno said. “She will be taking anti-rejection medications for the rest of her life, so her body won’t attack her liver and that will limit what she can do.”

The surgery carried with it the risk of several complications, including post-operative diabetes, high blood pressure, kidney issues, high cholesterol and infection. Excessive bleeding, for Salerno and organ rejection, for Seoane, were the main issues.

Salerno made medical history during the surgery when she became only the second person to have her right lobe removed using a laparoscopic procedure.

“They have had many people have the left, or smaller lobe, removed using that process but I am the second. My surgeon, Dr. Benjamin Samstein, also performed the first surgery.”

Laparoscopic surgery involves the use of a fiber-optic cable which is inserted into the patient so surgeons may view surgery while making smaller incisions.

Both sisters are waiting for their livers to regenerate.

“It will take between eight and 12 weeks for us to have everything back in working order, and until then we’re both taking it easy,” Salerno said.

Liver cancer caused by PSC killed famed NFL running back Walter Payton nine months after his diagnosis with the disorder in 1999. His efforts to promote organ donation have been credited with educating the public on its importance.

Salerno and her husband, Jake, have also been promoting the importance of organ donorship along with their work at their part-time beekeeping business. New York State has the lowest number of registered donors in the nation.

According to the website unos.com, more than 124,000 patients in the United States are waiting for organ transplants.

Anyone interested in organ donation may visit the local department of motor vehicles to register, or at websites including donate life.net.

The search for a donor was, along with visits to three hospitals, part of the reason Seoane waited two years before having surgery.

Both sisters are now waiting for their bodies to heal and to get back into their life routines, which will likely be sometime between late March and mid-April. “No heavy work for me, and the bees are resting during the
winter,” Salerno said.