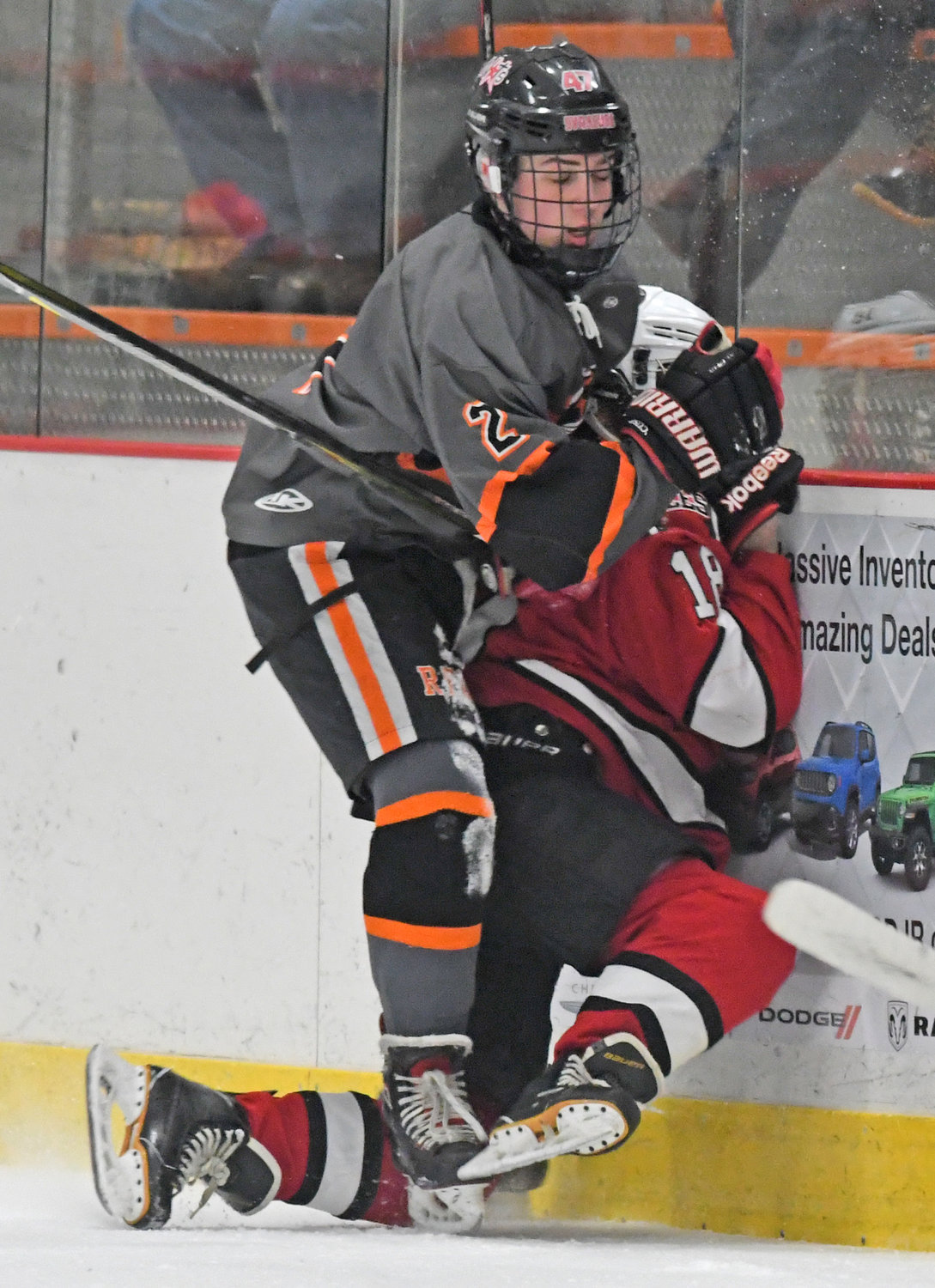 ROUGH STUFF — Rome Free Academy forward Jake Hall plasters Baldwinsville defender Matt Speelman into the boards in Tuesday’s game at Kennedy Arena. Hall was called for cross checking on the play but RFA killed off the ensuing Bees’ power play, one of four times the visitors had the man advantage but couldn’t get a goal. Rome won, 4-1.
(Sentinel photo by John Clifford) 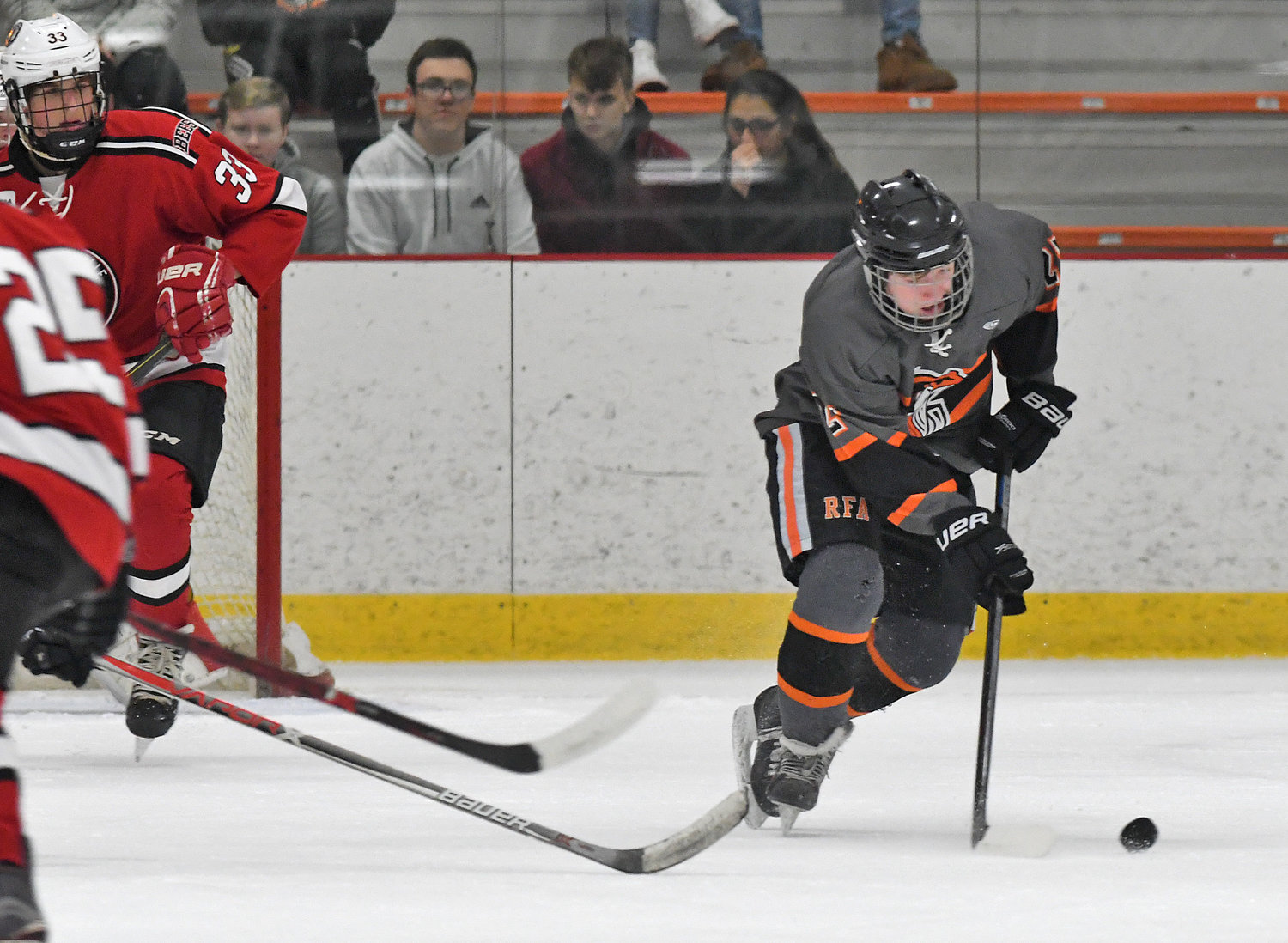 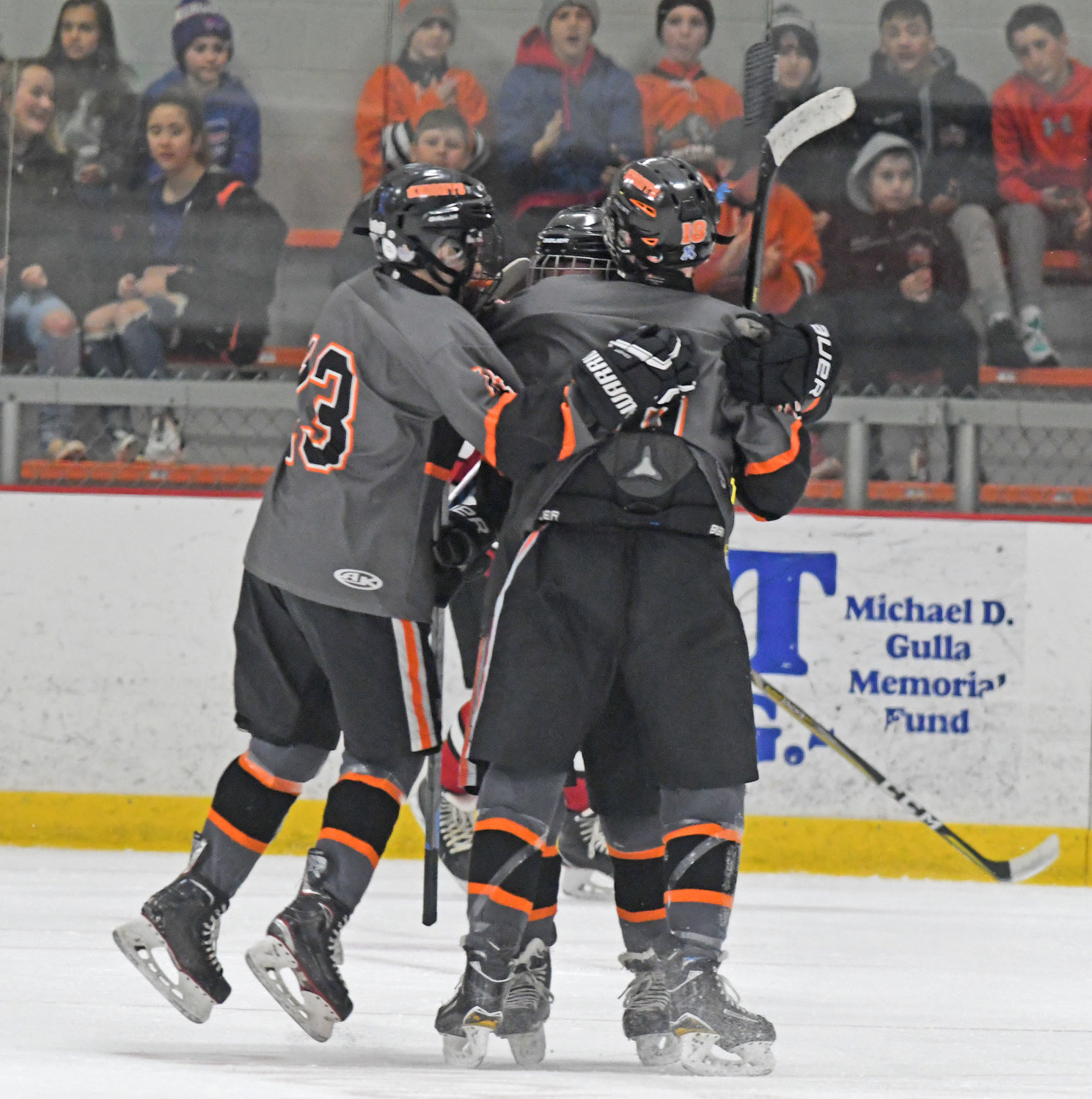 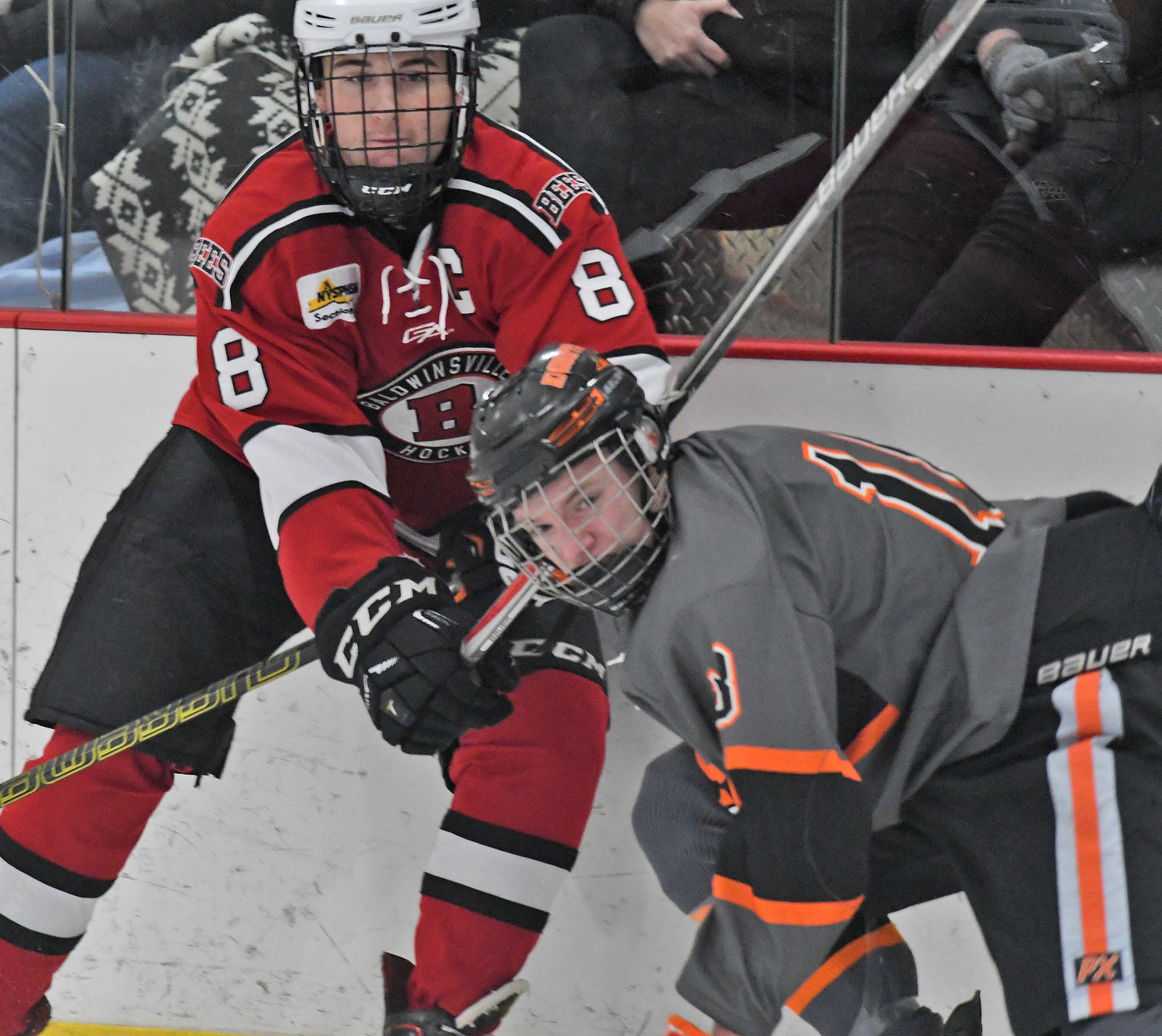 With a three-goal burst to open the third period, the Rome Free Academy hockey team took a 4-1 lead over Baldwinsville that they maintained until the final horn Tuesday night.

The Black Knights beat the Bees for the first time in five years to stay undefeated at Kennedy Arena this season.

RFA got an early boost from sophomore forward Eli Dormio, who gave them a 1-0 lead almost halfway through the first period. Dormio stole the puck in the Baldwinsville zone, circled to the right and whipped a low shot that beat goalie Tommy Blais. The unassisted goal was the lone tally of the first period.

“I thought Eli had a great game, a lot of energy,” said coach Jason Nowicki after the win. The goal seemed to spark the team built on speed to challenge the much bigger Bees team to a more physical game.

“You get ups and downs in any game,” Nowicki said. “Tonight it was us staying with it. We didn’t back down to them and their size.” Nowicki said that he doesn’t like to look too far ahead on the schedule but admitted “this one I circled at the beginning of the season” as one of the biggest tests for the team.

The Bees scored the lone goal of the second period to tie the game. After an RFA turnover, Parker Schroeder took a shot stopped by RFA goalie Isaiah Nebush. Jamey Natoli grabbed the rebound and passed to Cameron Sweeney, who fired a shot high over Nebush’s glove hand for the score.

But RFA regrouped, Nowicki said, using the second intermission to focus on the plan: stick to the system and make the simple plays. “Keep the foot on the gas.”

Right away RFA dominated the third period. On a power play 96 seconds into the final period, sophomore forward Logan Dorfman took a pass from sophomore defender Jared Hussey and moved into the Bees’ zone. He was knocked to his knees and the right face-off circle, but recovered and maintained possession of the puck then spun and fired a shot low that found the mark. Hussey earned the assist on the goal that made it 2-1.

Then 45 seconds later, it was senior captain Danny Mecca who wired a shot from the point that got through traffic and found the back of the net past Blais, who was screened on the play. Junior Griffin Eychner and sophomore Jake Hall each earned an assist as Rome took a 3-1 lead.

The Black Knights scored the game’s final goal with 11:18 left in the contest. Kyle Lubey, a junior forward, blasted a shot from the point to beat Blais. Dorfman and Mecca each had an assist.

The RFA penalty kill stopped all four of Baldwinsville’s power play opportunities. “That’s something that I really take pride in,” said Nowicki. “We talk about it every day. It gets better and better every time out. The most exciting thing about coaching,” he said, is seeing young players develop their game and become “better players and better people.”

Mecca said the Black Knights kept their poise after giving up the lead.

“We just stuck to the game plan,” said Mecca. “If we play well we can beat anybody in the league.” He said that during the second break the players knew the third period “could define our season.” The key, he said, is to “keep listening to coach, keep playing in the system, keep playing with intensity.”

Nebush made 28 saves in the win. Blais stopped 19 shots and took the loss.

RFA is now 11-3 overall, with a 5-2 record in Division I. The team remains unbeaten at home with an 8-0 record there.

The Black Knights are back in action at 7 p.m. Friday at Kennedy Arena against Fulton (3-6) in another league game.