U.S. Sen. Chuck Schumer visited the Adirondacks on Monday to discuss what he thought the most “historic” national investment in curbing climate change — the Inflation Reduction … 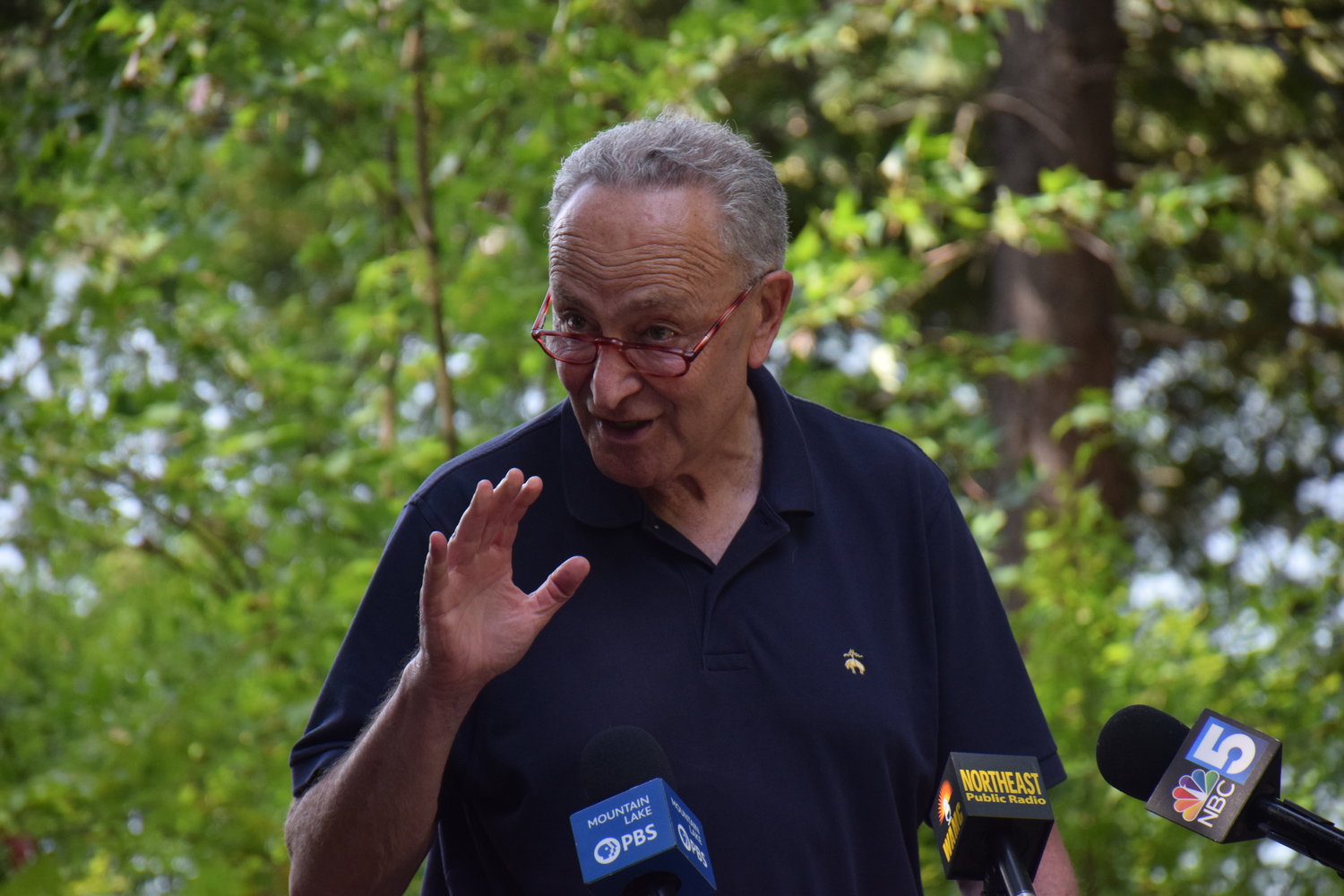 U.S. Sen. Chuck Schumer discusses the Inflation Reduction Act of 2022 at Heart Lake in Lake Placid on Monday, specifically highlighting how the act could benefit the climate and economy in the Adirondacks. 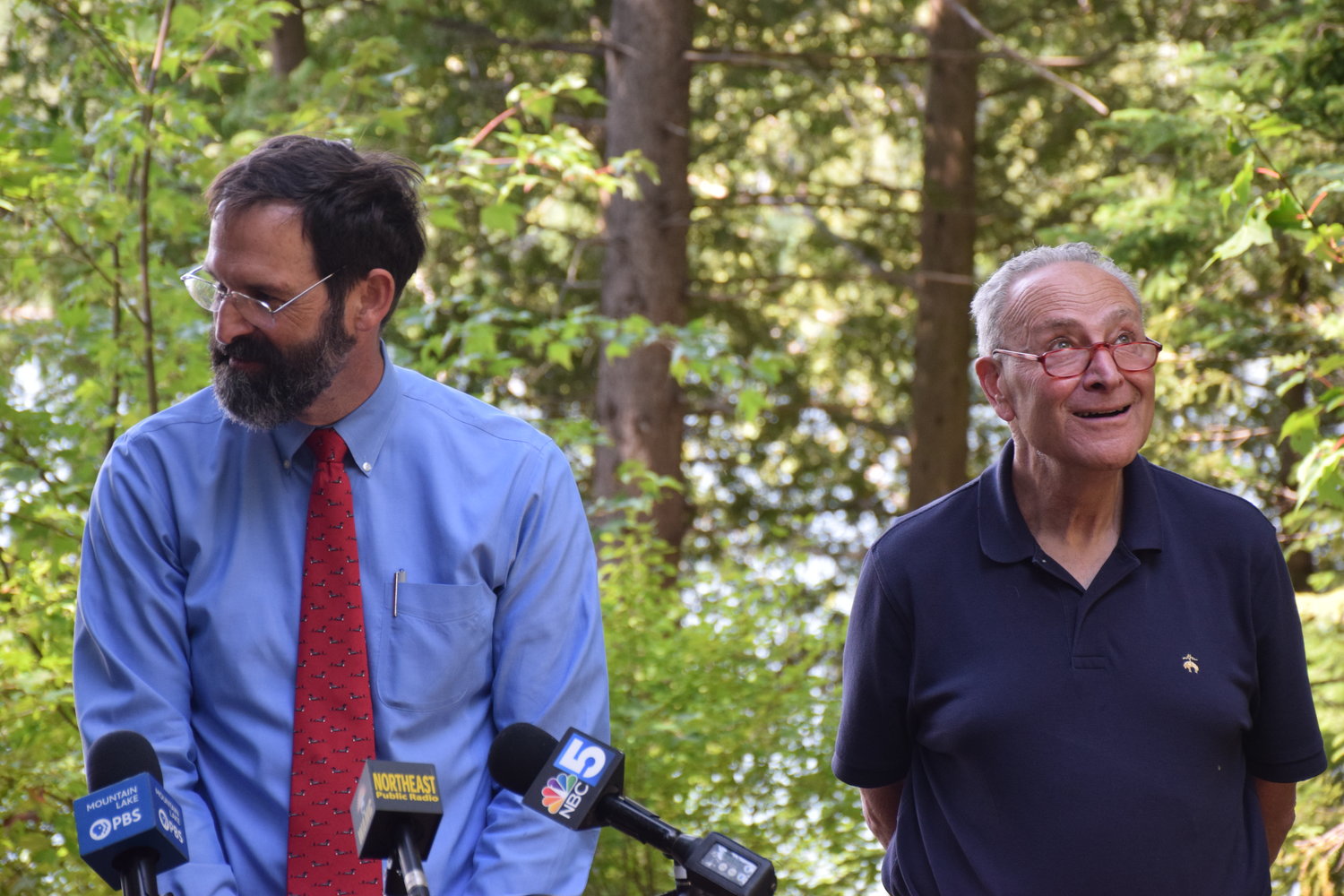 LAKE PLACID — U.S. Sen. Chuck Schumer visited the Adirondacks on Monday to discuss what he thought the most “historic” national investment in curbing climate change — the Inflation Reduction Act of 2022 — could offer the North Country.

Schumer came to ADK’s Heart Lake Program Center and Adirondack Loj in Lake Placid to detail the environmental provisions of the act and how they might be felt in the Adirondacks. He also spoke briefly about his fond memories in the Adirondacks, which he said include going out on Regional Office of Sustainable Tourism CEO Jim McKenna’s boat on Lake Placid last year.

President Joe Biden signed the Inflation Reduction Act, which includes nearly $370 billion in funding and tax incentives for clean energy and greenhouse gas reduction measures over the next decade, into law on Aug. 16.

Schumer said that the Adirondack Park — one of the areas in the U.S. that he believes is “truly on the frontlines of climate change” — would be one of the places to benefit most from the legislation.

Of the IRA’s climate investments, Schumer highlighted $1 billion included in the bill for electric buses, garbage trucks and transit buses, along with the act’s temporary investment in restarting the air quality monitoring systems in Newcomb and other upstate areas, as a couple of key ways the act could influence the North Country.

He also noted that many North Country families could see savings in their energy bills with the act’s investment in residential energy efficiency upgrades.

He said tax credits and rebates would be available to help people buy solar panels, make upgrades to their heat pumps and purchase energy-efficient cars. He added that the act invests billions in providing financial relief to economically distressed farmers, along with funds set aside for conservation and land management that he said could help farmers adopt eco-friendly business practices.

Schumer recalled the acid rains that washed over the Adirondacks as a result of fossil fuel emissions from coal-burning power plants in the Midwest, which by 1990 rendered around 700 bodies of water in the Adirondacks “dead” — too acidic to support their native wildlife.

Now, Schumer said, life is coming back to those waters said that progress was largely a result of amendments made to the Clean Air Act in 1990. He said the IRA could act as a similar “turning point” for the Adirondacks in the face of a warming climate. “We’re doing that 10 times over with this bill,” he said.

Schumer said that because the IRA is good for the climate, it’s good for the economy — he expected the act to create “thousands and thousands” of jobs in the North Country in conjunction with its investments in green energy.

“The economy in the Adirondack Park is predicated on tourism, and the tourism industry is directly tied to the health of our ecosystem,” he said, adding that local jobs would “go down the drain” if the ecosystem failed. “So even if you’re not an avid environmentalist … you’ve still got to care about this, because it’s J-O-B-S.”

Schumer thought that IRA funding could start being distributed as early as this fall, saying that Biden wants to “move quickly” to implement the act.

The IRA had a rocky start. A previous version of the bill failed after Sen. Joe Manchin III, D-West Virginia, cast the lone Democratic vote against the bill as presented in July. Schumer and Manchin negotiated behind closed doors for nearly two weeks before presenting a bill that included billions of dollars for climate protections.

Schumer said on Monday that he wasn’t sure if the IRA would get through. He said Manchin had a “different view” than most people in his party — Manchin has said he didn’t want a bill that included climate or tax provisions. “When the bill fell apart, people said, ‘One man is holding up everything we’ve been doing (for the climate) and might be responsible for the world being set on fire,’ basically,” Schumer said.

Schumer said Monday that he’d spoken with Manchin about the bill at the end of one week, and Manchin called back by Monday morning. Manchin was ready to negotiate, but with the stipulation that the talks be kept secret. Schumer said he kept getting calls from people asking about their progress with the bill, but he couldn’t say anything. Ultimately, Schumer said, he and Manchin agreed on the “historic” Inflation Reduction Act. While the bill carries the largest investment this country has ever made in reducing greenhouse gas emissions, Manchin fought for measures that would require the federal government to auction off lands and waters for oil drilling and increase tax credits for carbon capture technology — allowing fossil-fuel burning plants to stay in operation with lower greenhouse gas emissions — which were ultimately included in the IRA.

The bill was tied up in the 50-50 Senate — with 50 Republicans voting against the bill and 50 Democrats voting in favor — before Vice President Kamala Harris cast the tie-breaking vote that pushed the bill through to the House and, ultimately, Biden’s desk.