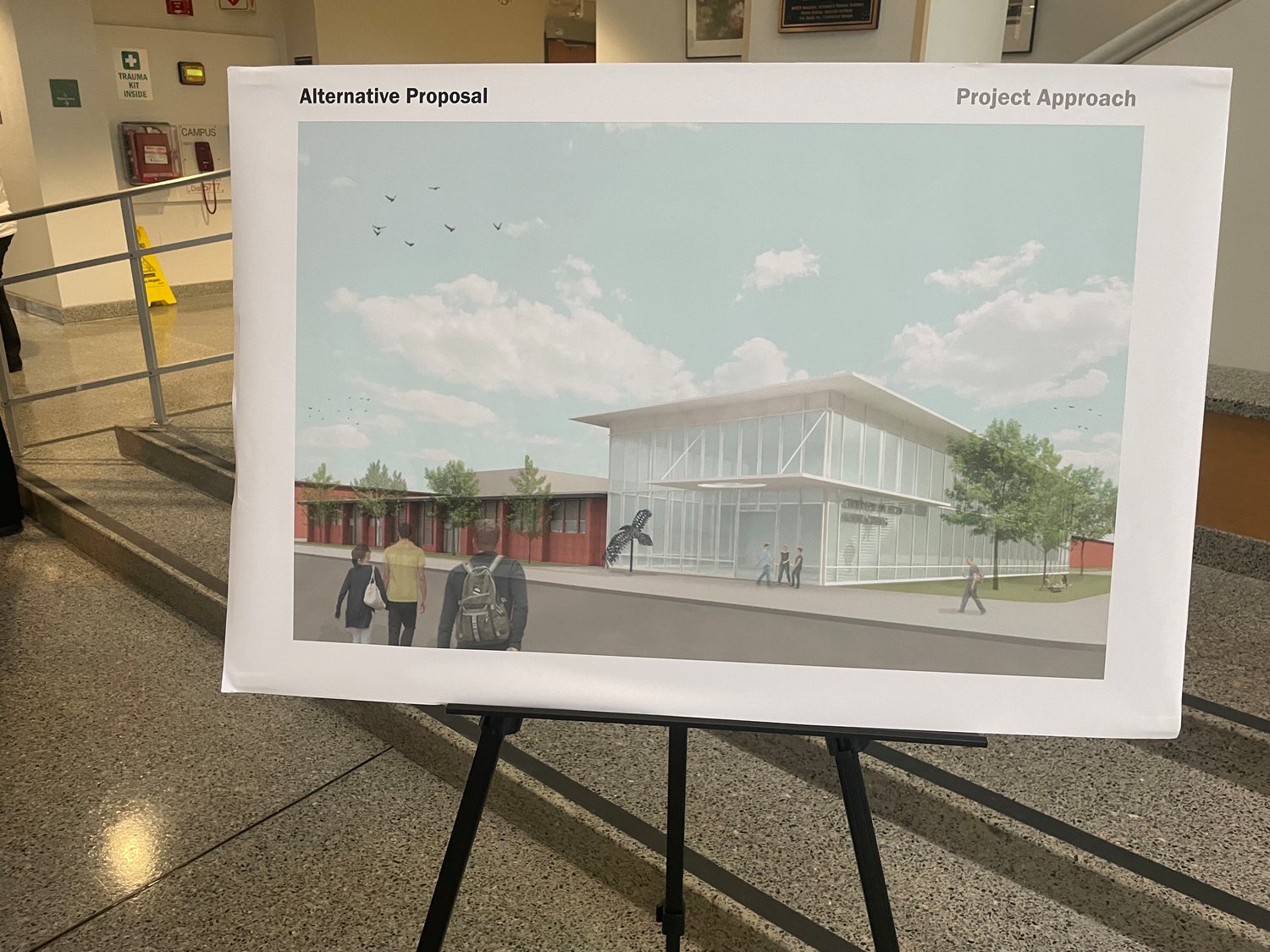 Here is an artist’s rendering of what the renovated and expanded Science and Technology Building could look like at Mohawk Valley Community College’s Utica Campus. The project was announced by U.S. Sen. Charles E. Schumer during a press conference at MVCC on Thursday.
(Sentinel photo by Alexis Manore) 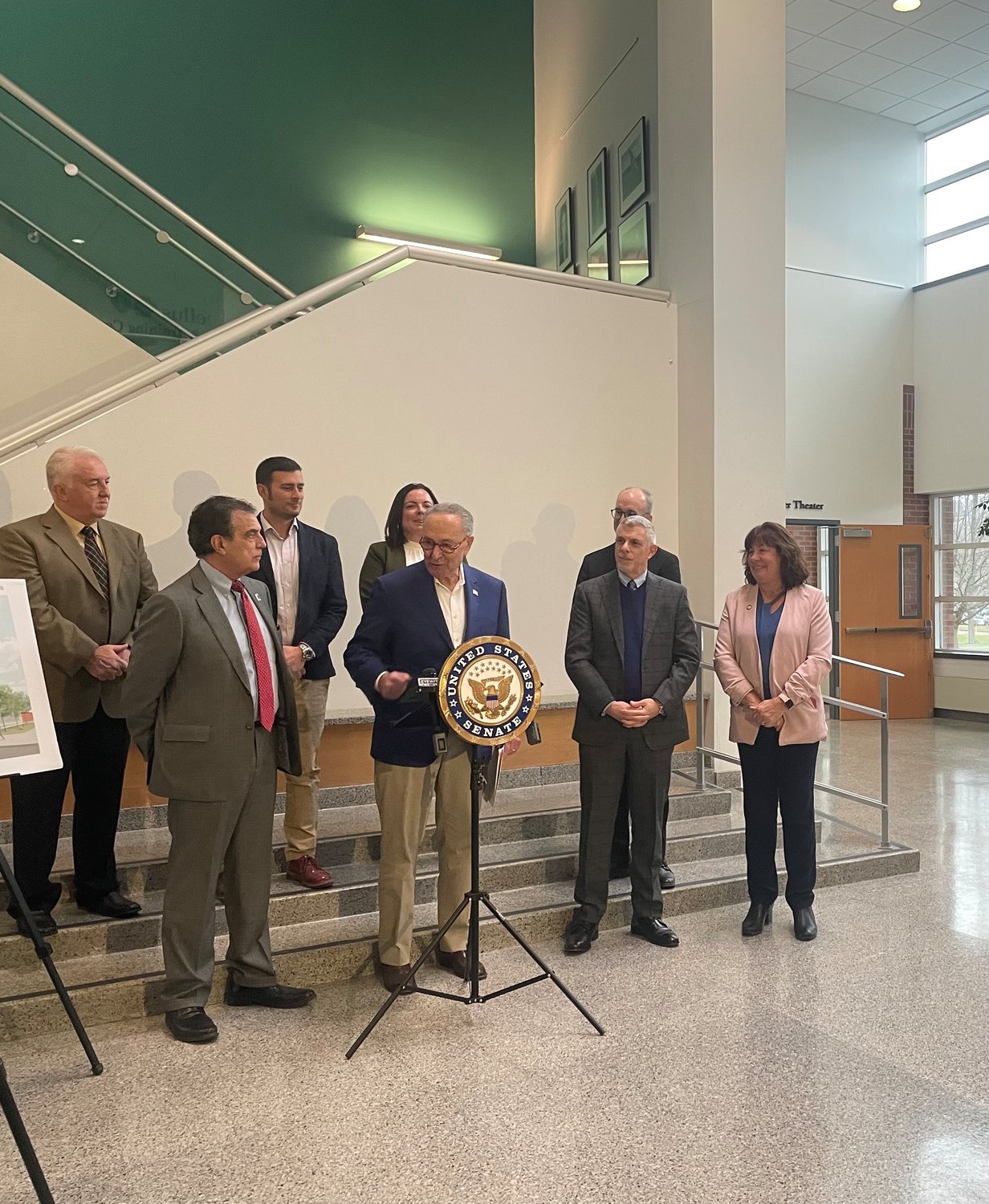 Schumer announced the news on Thursday, Jan. 12. With this funding, MVCC will be able to purchase state-of-the-art industrial equipment for its Science and Technology Building, which will undergo a renovation and expansion. In addition, Schumer and U.S. Senator Kirsten Gillibrand secured over $7 million for the Rome Laboratory.

Oneida County Executive Anthony J. Picente Jr. thanked Schumer for his commitment to the county, saying, “He continues to travel and go to every single county in the state of New York every year. Nobody around the United States does that. Nobody in New York has ever done that. … The senator has repeatedly during his tenure brought home numerous funding pieces to this county, this state.”

Schumer highlighted the CHIPS and Science Act, a law he championed, which promises $52 million in incentives for businesses to build semiconductor plants in the U.S.

Several technology companies have chosen Central New York as the location to build semiconductor manufacturing plants, like Wolfspeed, which opened the world’s first and largest 200mm silicon carbide chip fab plant that is located in Marcy in May 2022. In October 2022, Micron announced that it would be investing $100 billion into constructing a memory chip facility in Clay, New York.

“One of the questions when these companies, Wolfspeed, Micron, the others, came, was ‘Do you have the labor force that we need?’ because these are high-end jobs, they’re good-paying jobs, but obviously, they need some training,” Schumer said. “Thanks to the federal incentives that I made sure were in the bill, we can answer the question that they asked us.”

“Students who graduate from our local high schools, Proctor and everywhere else, can then come here to MVCC, get the training, and they know that with the increase in need for them, they’ll get a good-paying job and stay here, they don’t have to go somewhere else,” he added.

The new Science and Technology building, where the equipment will be held, will also allow for MVCC to improve and expand its existing technology programs, like robotics and electrical engineering. This will allow for MVCC to educate over 2,400 students in STEM fields in the first three years alone after the project is complete.

MVCC President Randall J. VanWagoner said the Science and Technology building will be completely redeveloped, with the help of Oneida County and from state representatives like Buttenschon and other elected officials.

VanWagoner said that the $2 million in federal funding will be matched in state dollars.

The funding for the Rome Laboratory includes $4.2 million for the Air Force Research Laboratory to construct frequency antennas for the Newport and Stockbridge test annexes, and $3 million for the Griffiss Institute Smart-X Internet of Things.

Heather Hage, President and CEO of Griffiss Institute, said the world is becoming increasingly dependent and connected with technology, making these investments necessary.

“The focus of these projects that we’ll be working on is to ensure that we’re able to get the greatest benefit from those technologies, to leverage the incredible work being done at the Air Force Research Laboratory Information Directorate, in artificial intelligence, in machine learning, in quantum information sciences and in the aerial systems, and better translate those out to community impact right here in the Mohawk Valley,” Hage said.

Palmieri and Buttnenschon both thanked Schumer for his continued investments in the Mohawk Valley.

“My goal has been to make Upstate New York a huge tech center,” Schumer said. “And we’re getting that to happen. With semiconductor chips and advanced quantum research in the Mohawk Valley.”