The Galuski sisters dominated all game for the Waterford-Halfmoon girls soccer team in a 6-3 win over Sauquoit Valley in the Class C state title game Sunday morning. 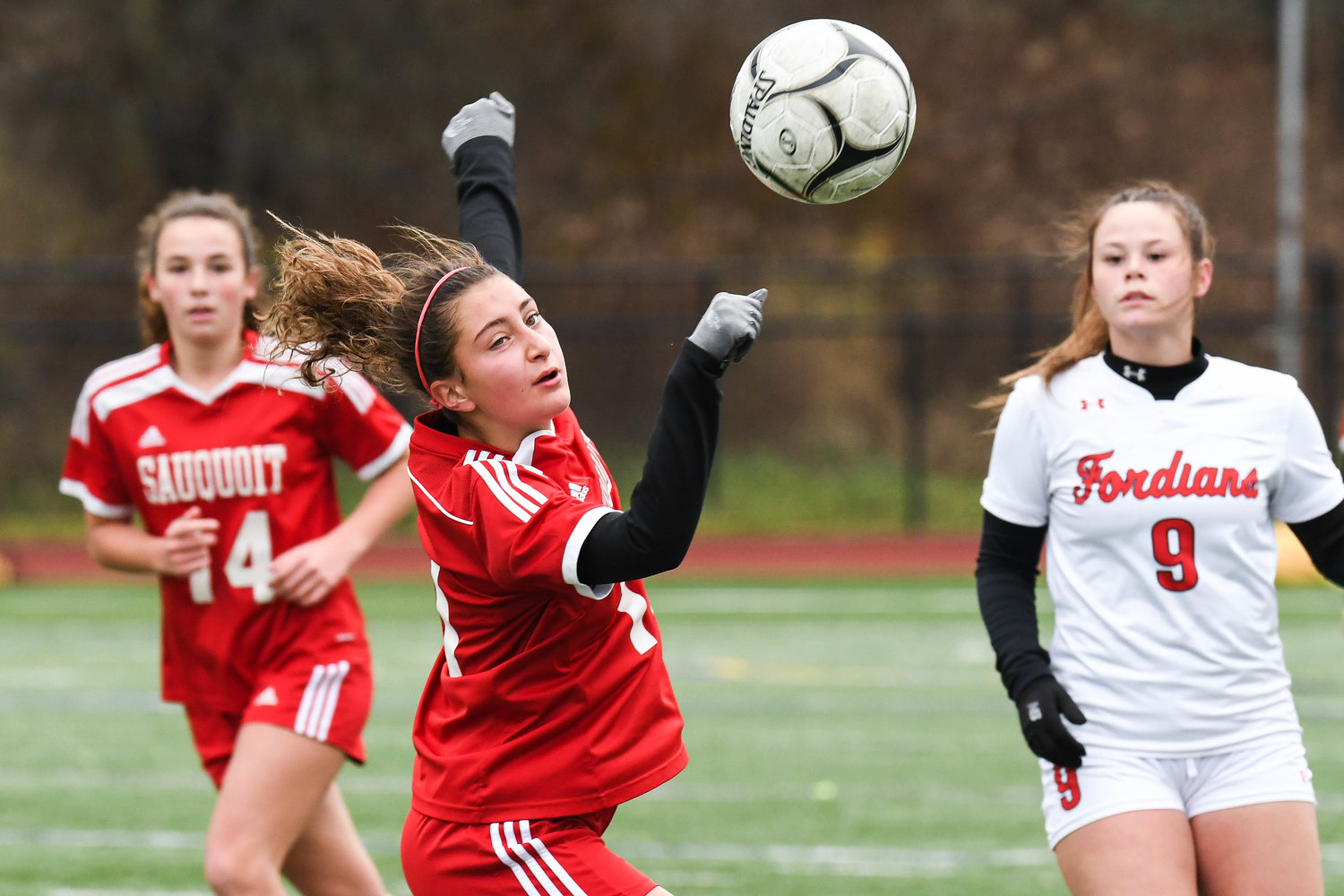 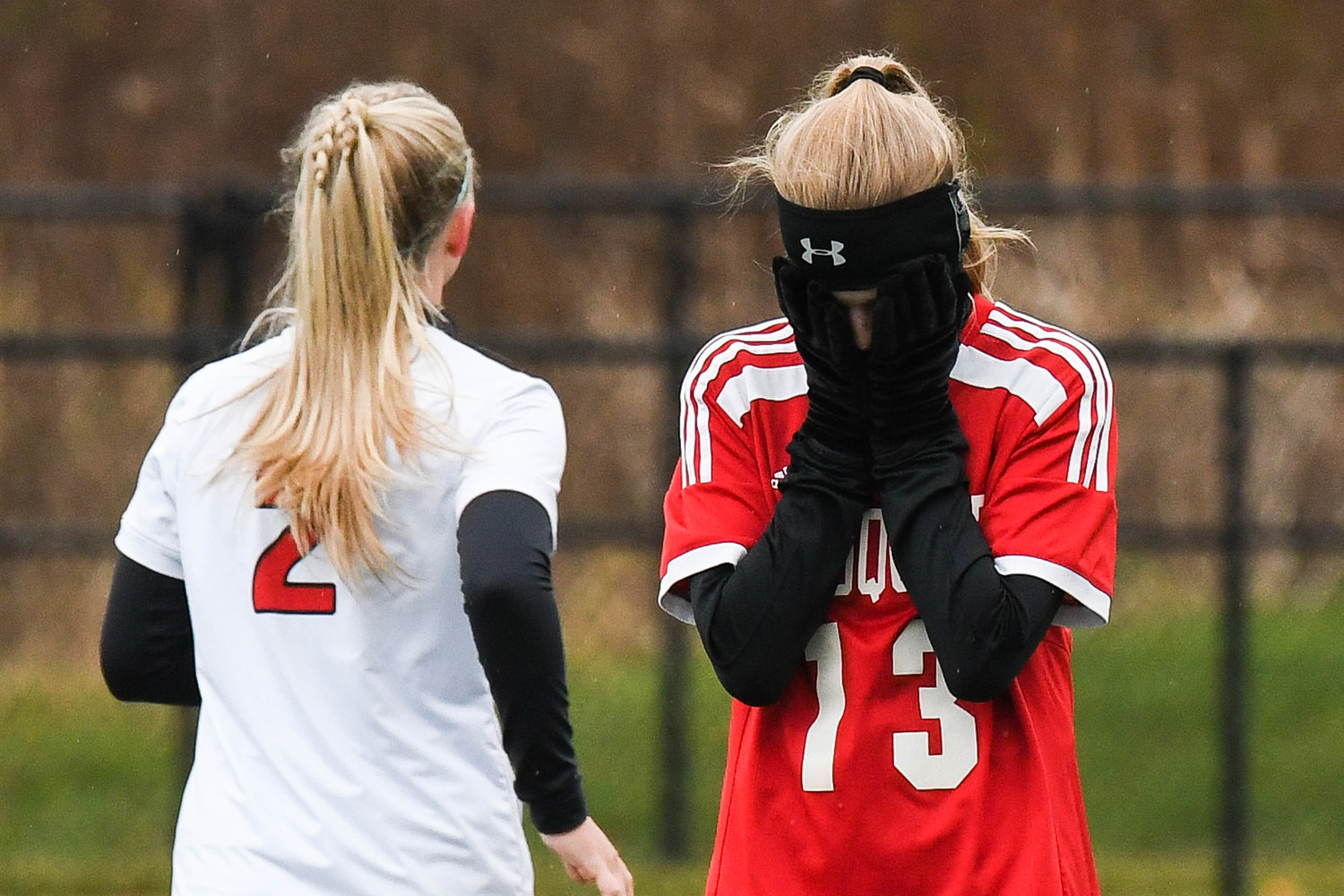 Sauquoit Valley's Kamryn Yerman puts her hands over her face after Section II's Waterford-Halfmoon scored one of the team's six goals in the Class C state final on Sunday at Cortland High School. The Fordians won 6-3, spoiling Sauquoit's quest for the program's first state title.
(Sentinel photo by Alex Cooper) 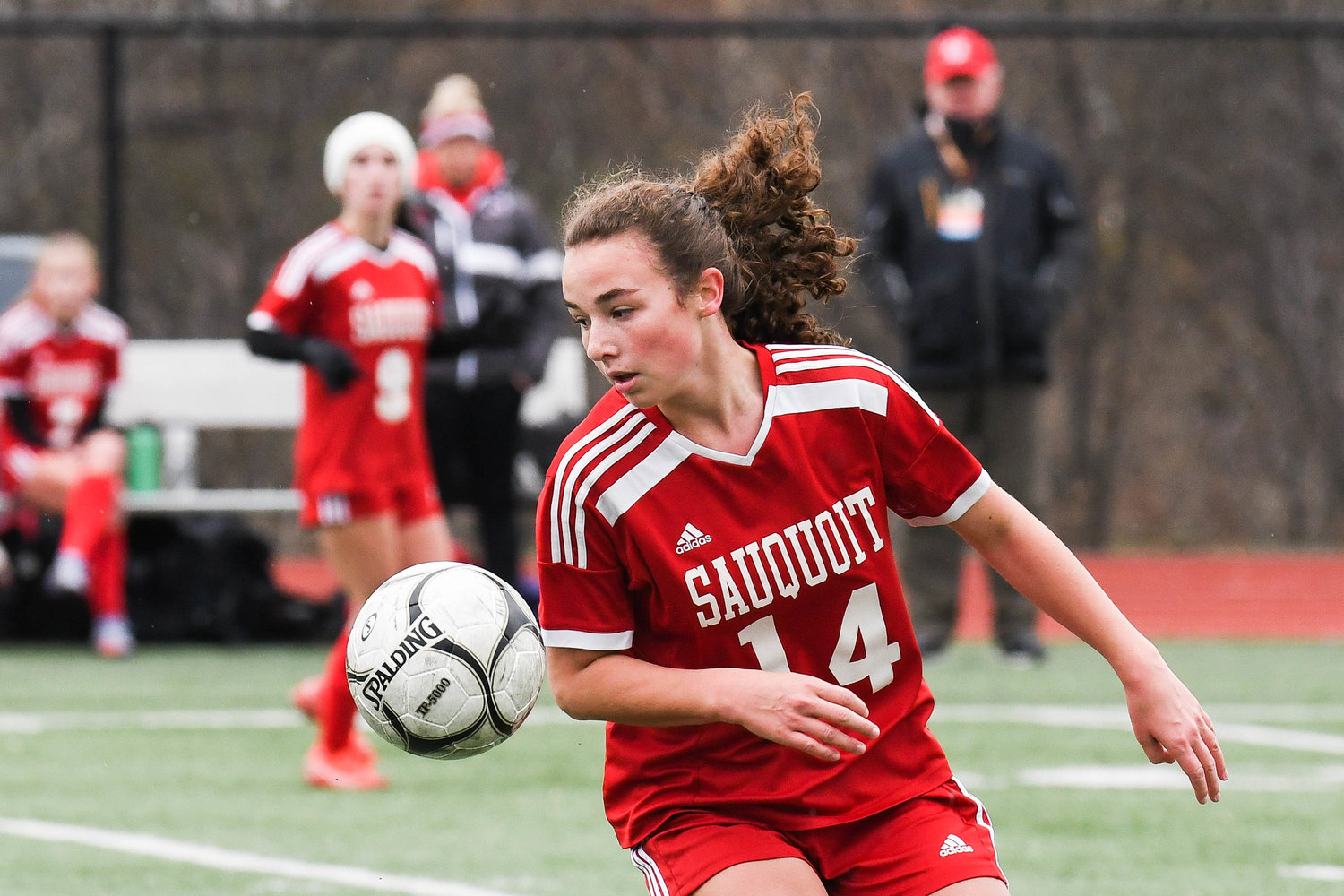 CORTLAND — The Galuski sisters dominated all game for the Waterford-Halfmoon girls soccer team in a 6-3 win over Sauquoit Valley in the Class C state title game Sunday morning.

Seventh-grader Payton Galuski had a first half hat trick, scoring her team’s first three goals. Then Addyson Galuski, a junior, added the other two goals that put the Fordians up 5-1 at the half. She completed her hat trick with a goal on a late penalty kick.

Section II winner Waterford-Halfmoon entered the game with a record of 21-1. The Fordians came out with the kind of pressure Sauquoit had used the previous day in a 2-1 win over Section V's Byron-Bergen to get to the title game.

"We knew who their scorers were and we didn't mark them," said Sauquoit head coach Courtney Roberts after the game. In the second half, the team shifted its strategy slightly to try to add some offense because of the big deficit, she noted, and the team also defended the opponent's most talented scorers better. The team got some momentum, but it was "too little, too late," she said. If the team could have gotten a better start, it could have played the eventual champions closer. "I'm very proud of them."

It was, Roberts said, "a storybook season, just not a storybook ending." Her hope is that the season's success creates "excitement for the whole program," swells the numbers for participation in girls soccer for the district and "hopefully the community rallies around us."

Sauquoit ends the season 19-3-1. It was the program's fifth trip to the state final four and the third time the team had made it to the championship game but the program is still seeking its first state title, according to school officials.

Payton Galuski opened the scoring 4:04 into the contest when she sliced through the defense and fired a shot to the far post that beat Sauquoit goalkeeper Jadyn Land. Her second goal came 22 minutes later when she scored on a long shot.

Sauquoit senior Kaitlyn Corr got the team back within one 23 seconds later when she finished a prolonged sequence from the top of the 18-yard box. Galuski completed her hat trick with 17:42 left in the first half with another weaving run through the Sauquoit defense and another shot to the far post.

Older sister Addyson got the first of her three goals less than two minutes later when she launched a shot from about 50 feet out and it just cleared the outstretched fingers of Land and went in just under the crossbar to make it 4-1. She made it 5-1 with four minutes left in the first half when she dribbled in on goal, put a spin move on a defender just a few feet from goal and scored to the short side in the few feet that Land was playing off the post.

Corr struck for her second goal with 37:25 left in regulation to open the second half scoring. She split a pair of Waterford defenders and sent a shot at goalie Maddy Atwood, who made a stop but could not hold on. The ball trickled over the goal line before anyone could clear it off the line.

Sophomore Addison Lazarek got the score to 5-3 with just under 18 minutes left to play. Junior Olivia Kalil made a long run down the left side and shot wide of the far post. Lazarek got a foot on the ball to keep in it play a few feet from goal and curled it home for the score.

But any hopes of completing the comeback ended when Waterford earned a penalty kick for a foul in the penalty area with 3:11 left in the game. Addyson Galuski took the penalty and shot to Land's right and into the net to complete her hat trick.