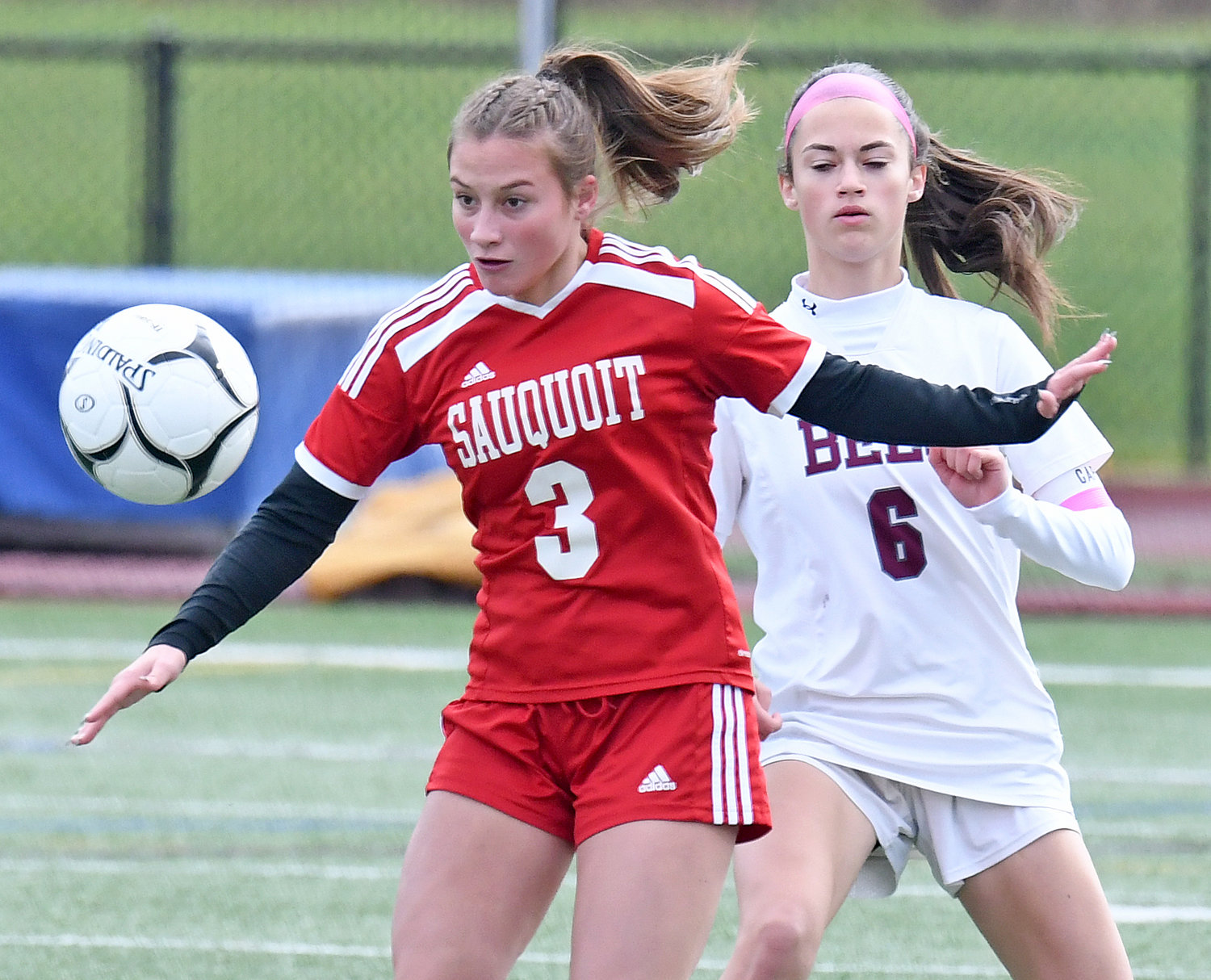 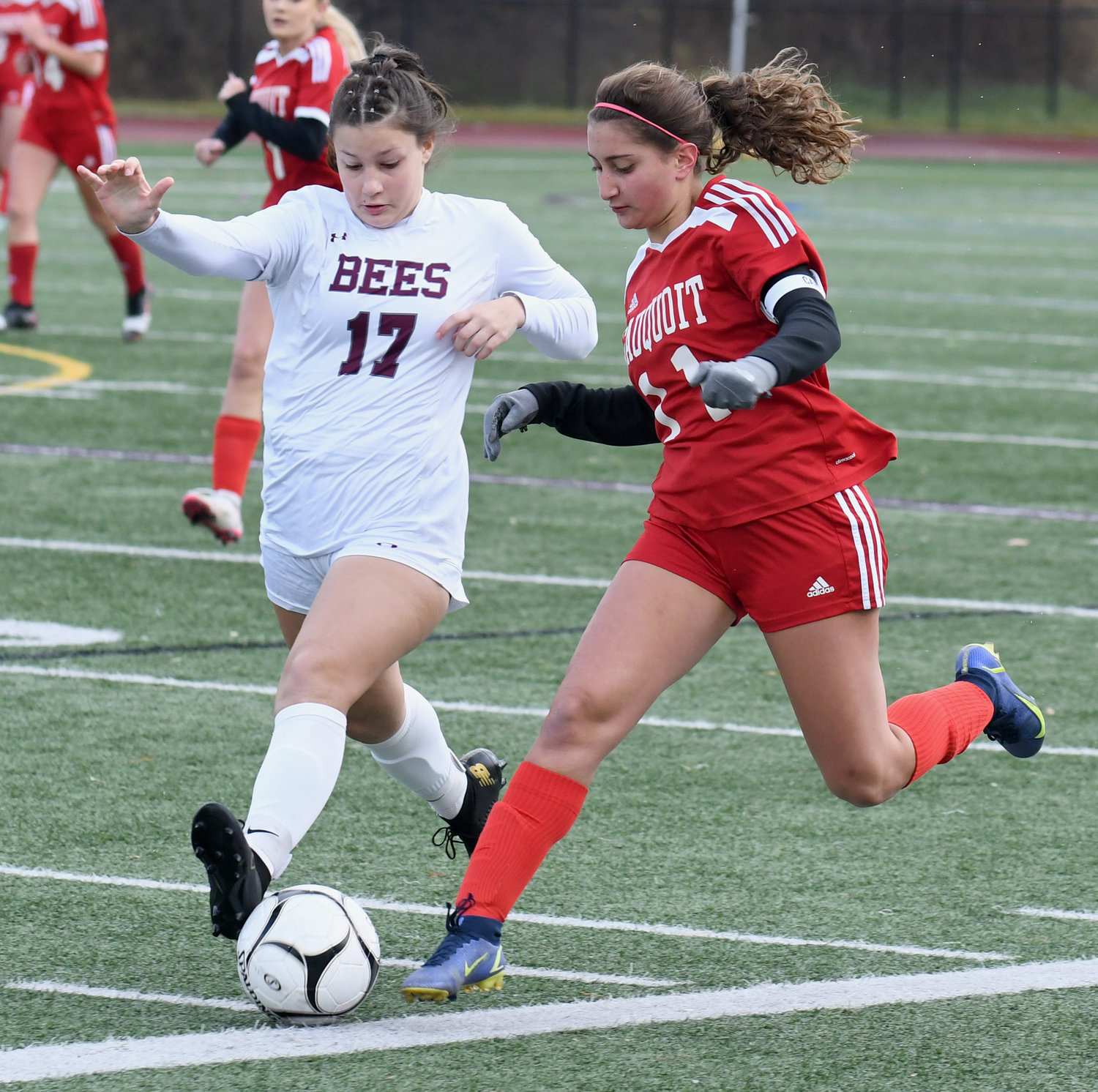 Sauquoit Valley forward Olivia Kalil, right, and Byron-Bergen's Megan Jarkiewicz both make a play for the ball Saturday at Cortland High School in the semifinals of the Class C state playoffs. Kalil scored the game's first goal and Sauquoit won 2-1 to advance to the finals on Sunday.
(Sentinel photo by John Clifford) 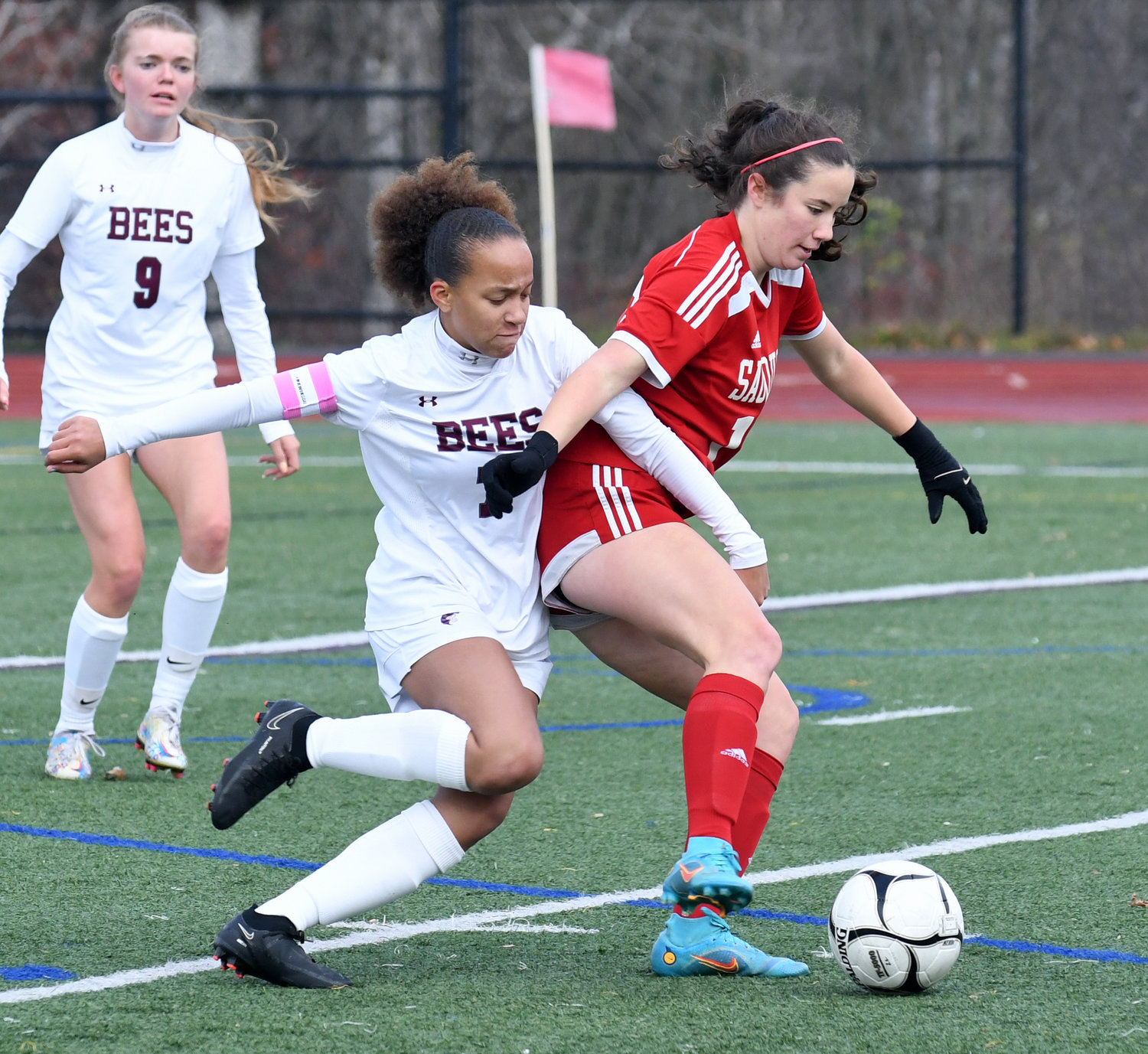 Sauquoit Valley forward Addison Lazarek, right, shields Byron-Bergen's Ava Wagoner during their state semifinal game at Cortland High School Saturday. Lazarek's goal with 10 minutes remaining in regulation allowed Sauquoit to re-take the lead at 2-1. It proved to be the game-winner as the team held on 2-1 to advance to the state championship game.
(Sentinel photo by John Clifford) 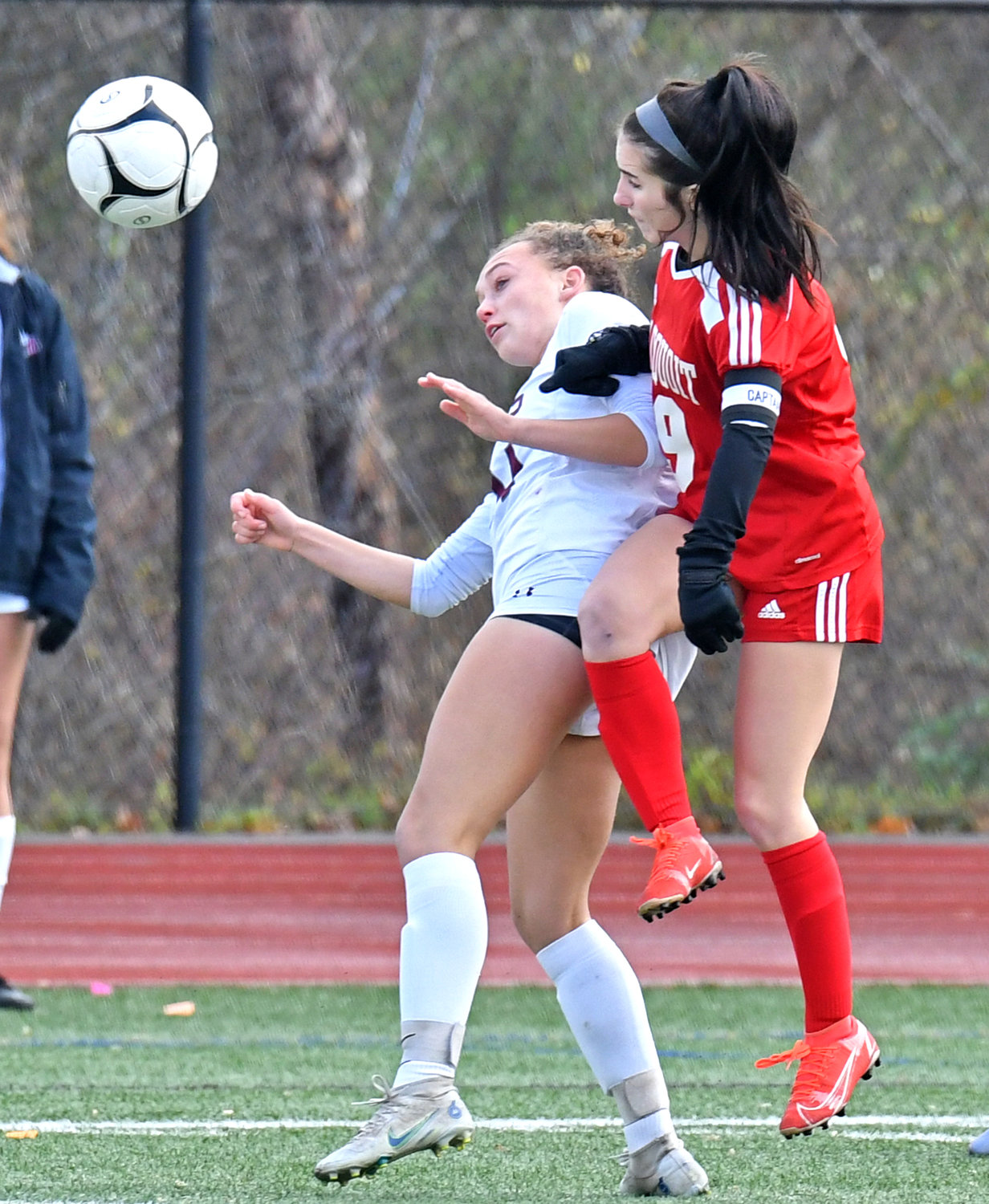 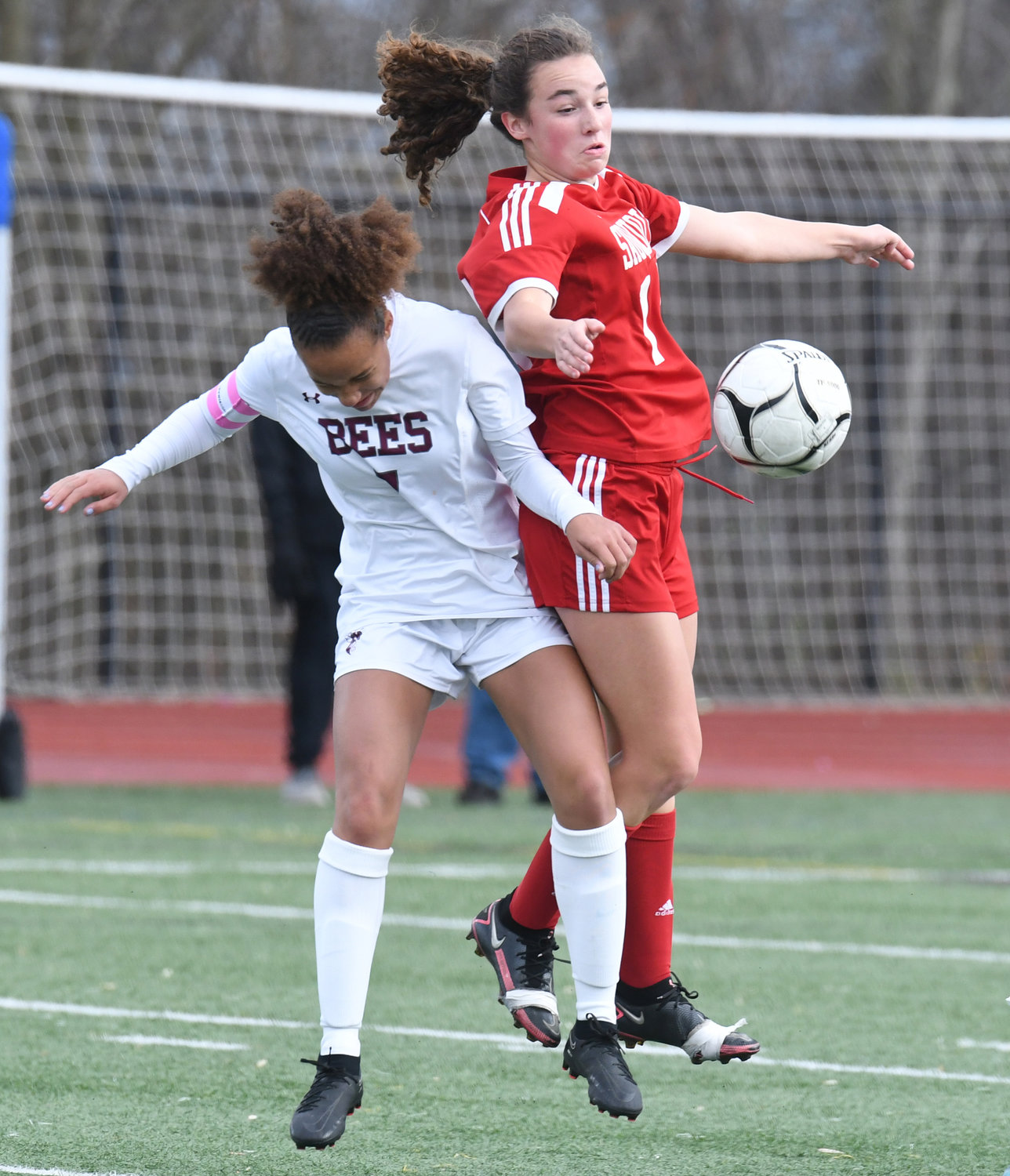 The teams traded chances in a scoreless first half in temperatures that hovered around 50. It was a matchup of Sauquoit’s offensive pressure and Byron-Bergen’s counter attacking, with Sauquoit holding the edge in time of possession but unable to get a goal in the first 40 minutes.

Sauquoit head coach Courtney Roberts said after the win that the message at the half was for the defense to play smart and for the offense to “use more of the sideline,” as the Byron-Bergen defense worked to deny the team the middle of the field. She said she does not have to critique much, since “these girls are their own worst critics,” and know what they need to change or improve. But in a tactical sense, there was no major adjustments. “We don’t deviate from our plan,” Roberts said.

The second half started off with a bang, with both teams finding the back of the goal within eight minutes.

Sauquoit junior Olivia Kalil netted her team-leading 23rd goal of the season 2:20 into the second half. Sophomore Addison Lazarek sent a cross toward goal and though goalkeeper Novalee Pocock got a hand on it she could not secure it. Kalil swooped in and drove the ball home to give her team the 1-0 lead.

It took Byron-Bergen just over five minutes to equalize. Emma Starowitz blasted a shot to the post and in past Sauquoit senior goalie Jadyn Land.

Roberts said the message to the team was clear once the game was tied. “When the goal gets scored, you have to respond.” And they did.

With 10 minutes left in regulation, Sauquoit played the ball into Byron-Bergen territory. The defense could not coordinate and the ball wound up on the foot of Lazarek, who broke free and shot across her body from right to left and past Pocock.

Lazarek said after the win that the game plan all along was to “break their defense,” get one-on-one matchups and score. The switch to attacking from the outside, she said, works well with her game. “My plan is get the ball, use my speed to get some corners.” On the goal, “I saw the ball being crossed and they weren’t really talking,” she said of the defenders around her. “I knew it was my ball and I could take it and go to goal.”

The Sauquoit offense did not let up, pushing the pace and denying Byron-Bergen the ball as the team tried to find a goal to get the game tied again. Time and time again, the Sauquoit defense snuffed out lead passes. Senior center back Kayla Salvatore routinely ended Byron-Bergen opportunities with long clearing passes and breakout passes.

After the game, Salvatore said the team knew it had a challenge against an opponent that came in 22-0 on the season. The plan: “Play those crisp, hard through balls” to get the offense started. “Our defense work really well together.” And, she added, the team has the mental strength to win at this level. “We had it mentally.”

“Huge, exciting,” said Roberts of the win. “We controlled the bulk of the game,” but, she noted, possession does not always equate to wins. Even until the final whistle, “it was anyone’s game.”

Roberts said one key to the team’s success is “being able to sub,” which she said, “is a big part of being able to press all game.” While many teams make few or even no changes during a game, Sauquoit regularly swaps players off and on to maintain pressure.

Lazarek said the plan will be to “show up and play our best. We have what it takes.”