Sabres and Blue Jackets set to hit ice for Hockeyville 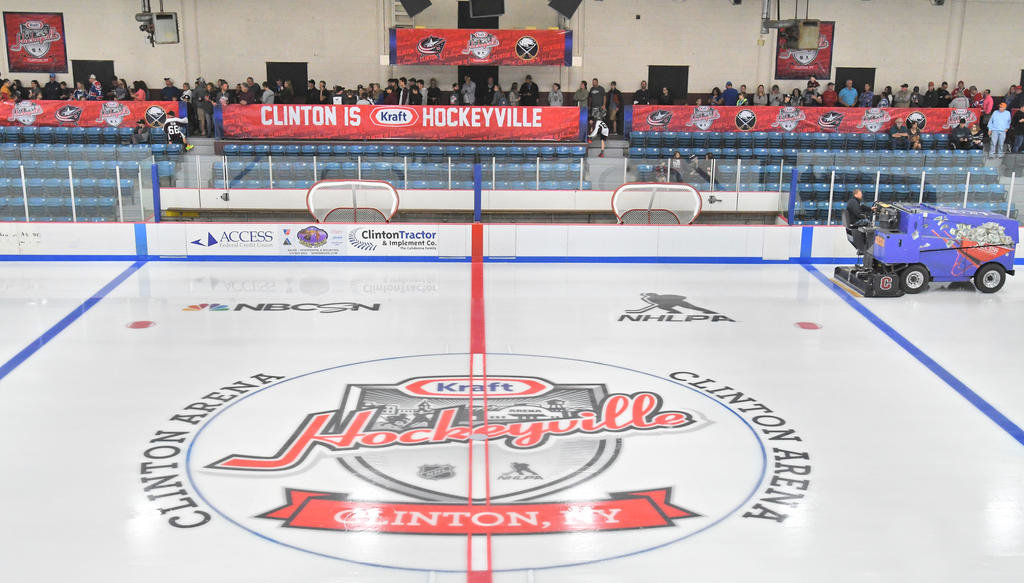 CLINTON — The culmination of the Kraft Hockeyville USA events is tonight’s NHL preseason game between the Buffalo Sabres and the Columbus Blue Jackets.

Getting to attend the game was an opportunity offered through a lottery. A little less than 400 tickets were distributed. A majority of the tickets went to Clinton Arena’s youth programs and almost 30 percent to the public.

The day started with players arriving for a red carpet appearance for the public, first the Blue Jackets then the Sabres, at 9 and 9:30 a.m., respectively. Columbus took to the ice for a game day skate at 10:30 then the Sabres followed for theirs at 11:30.

A pep rally was on the schedule for 5 p.m. at Clinton Central School. This is also open to the public.

Then the game starts at 7 p.m. at the Clinton Arena.

It’s the second preseason game between the two teams this year.

The Sabres’ first game of the season was a 4-1 victory over Columbus on Monday, Sept. 17. The team has also played the Pittsburgh Penguins, a 3-2 win, and losses to the Toronto Maple Leafs in a home-and-home series last Friday and Saturday, 5-3 and 3-2. The Sabres will finish their preseason against Pittsburgh Wednesday and the New York Islanders on Friday. Buffalo’s regular season starts on Oct. 4 at home against the Boston Bruins.

The Blue Jackets have played five preseason games. After the loss to the Sabres, the team beat the Chicago Blackhawks, then lost to the St. Louis Blues, Pittsburgh and the Blues again. The team will play Pittsburgh and Chicago this weekend to wrap up the preseason. Columbus opens the regular season on Oct. 4 at Detroit.

The Sabres are led by center Jack Eichel, an alternate captain the team took with the second overall pick in 2015. He was the second freshman to win the Hobey Baker Award as the top college player while at Boston University. Kyle Okposo, another alternate captain, is at right wing.

Defenseman Zach Bogosian is the team’s other alternate captain. Coach Phil Housley is still considering options for captain; the Sabres have not had a captain since Brian Gionta was not re-signed after the 2016-17 season.

The team has several options in net for the game. Linus Ullmark and Jonas Johansson split time in the opener, Carter Hutton and Scott Wedgewood played in the second game, then Hutton and Ullmark each played entire games against Toronto.

The Blue Jackets’ captain is left wing Nick Foligno, a native of Buffalo, where his father Mike spent 10 years of his NHL career. Center Boone Jenner is an alternate captain.

Columbus is backstopped by Sergei Bobrovsky, the winner of the Vezina Trophy as the league’s top goaltender, in 2013 and 2017. Also options in net who could get time tonight are Joonas Korpisalo and J-F Berube.