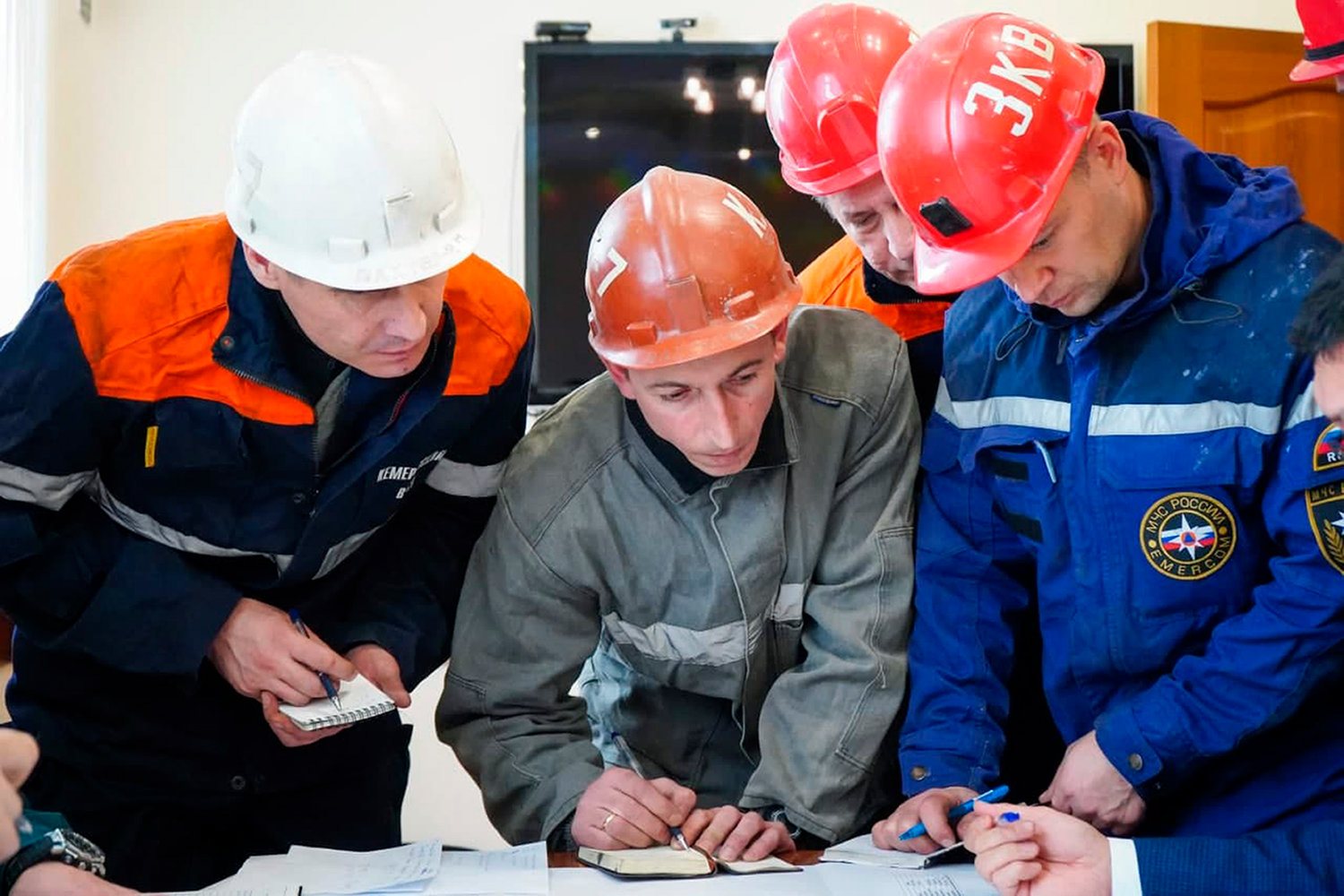 RESCUE PLAN — In this photo provided by the Governor of Kemerovo Region Press Office, rescuers attend a meeting, after the accident at the Listvyazhnaya coal mine in the Siberian city of Kemerovo, about 1,900 miles east of Moscow, Russia Thursday.
(AP Photo)
Posted Friday, November 26, 2021 7:08 am

MOSCOW (AP) — Russian news agencies say a fire at a Siberian coal mine has killed 52 miners and rescuers.

Officials previously said that rescuers found 14 bodies and the search for 38 people missing was halted for safety reasons, because of a buildup of explosive methane gas and a high concentration of toxic fumes from the fire.

The state Tass and RIA-Novosti news agencies cited emergency officials as saying that there was no chance of finding any survivors.

The Interfax news agency cited a representative of the regional administration who also put the death toll from Thursday’s fire at 52.

Rescue teams were rushed out of the mine for safety reasons because of a buildup of explosive methane gas and a high concentration of toxic fumes from the fire.

The state Tass and RIA-Novosti news agencies cited emergency officials as saying that there was no chance of finding any survivors and adding that it could take a long time to locate and recover the bodies.

Authorities said 11 miners were found dead and three rescuers also died later while searching for others trapped in a remote section of the mine. Regional officials declared three days of mourning.

A total of 285 people were in the Listvyazhnaya mine in the Kemerovo region of southwestern Siberia when a fire erupted and smoke quickly filled the mine through the ventilation system. Rescuers led to the surface 239 miners, 49 of whom were injured.

Russia’s Deputy Prosecutor General Dmitry Demeshin told reporters that the fire most likely resulted from a methane explosion caused by a spark.

Explosions of methane released from coal beds during mining are rare but they cause the most fatalities in the coal mining industry.

The Interfax news agency reported that miners have oxygen supplies normally lasting for six hours that could be stretched for a few more hours but would have expired by late Thursday.

Russia’s Investigative Committee has launched a criminal probe into the fire over violations of safety regulations that led to deaths. It said the mine director and two senior managers were detained.

President Vladimir Putin extended his condolences to the families of the dead and ordered the government to offer all necessary assistance to those injured.

In 2016, 36 miners were killed in a series of methane explosions in a coal mine in Russia’s far north.

In the wake of the incident, authorities analyzed the safety of the country’s 58 coal mines and declared 20 of them, or 34%, potentially unsafe.

The Listvyazhnaya mine wasn’t among them at the time, according to media reports.

Russia’s state technology and ecology watchdog, Rostekhnadzor, inspected the mine in April and registered 139 violations, including breaching fire safety regulations.