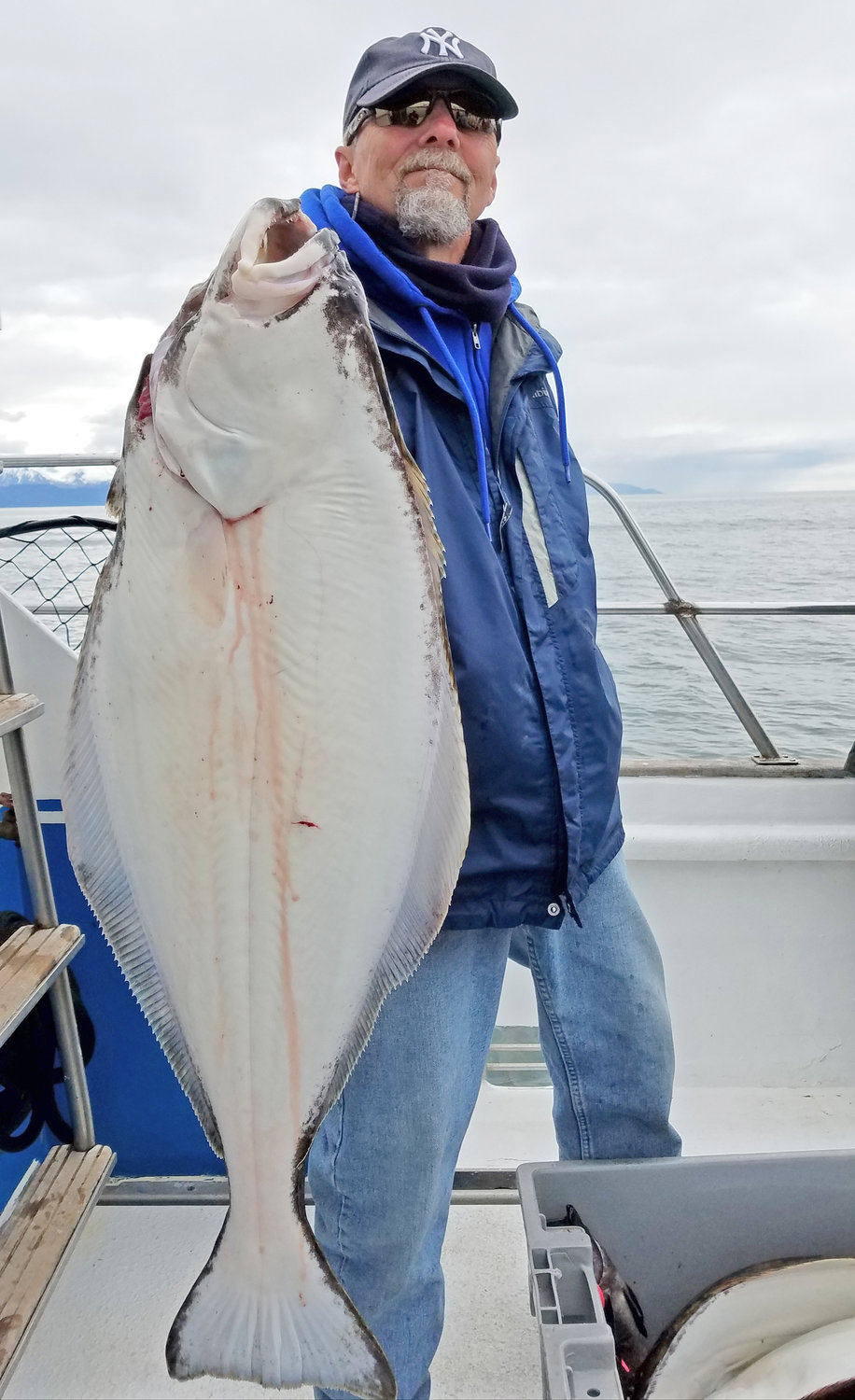 THAT’S SOME FISH — Nelson Rudiak, of Rome, displays the giant 30-pound halibut he caught during his trip to Alaska in 2019.
(Photo submitted) 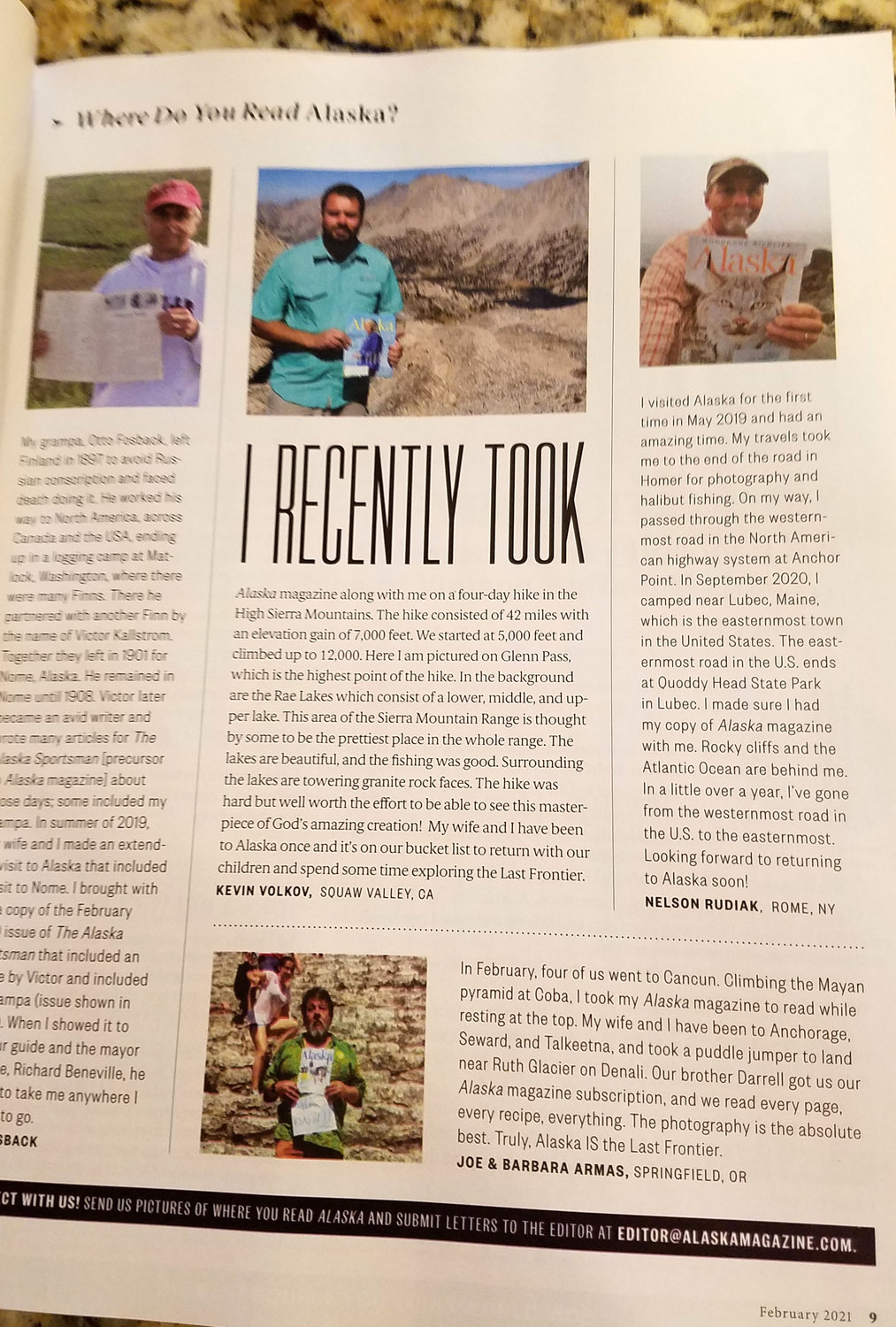 HE MADE IT — Nelson Rudiak, of Rome, proudly made the February 2021 issue of Alaska magazine, as his photo and small write-up can be seen far right. He submitted a photo of himself with the magazine from a summer excursion to Maine.
(Photo submitted)
Previous Next
Posted Sunday, January 17, 2021 9:01 am
Nicole A. Hawley
Staff writer
email

Nelson Rudiak, of Rome, recently got recognized for bringing a little bit of Alaska with him to Maine.

In May 2019, the amateur photographer had the opportunity of a lifetime, having made a bucket-list camping/hiking trip to the Last Frontier, sporting his camera and tripod.

He was so awe-struck by the state’s beauty, and its warm, friendly natives, that he decided to buy a subscription to Alaska magazine when he returned home to Rome, so he could keep tabs on all the happenings in his new favorite place.

The magazine happens to feature a “Where do you read Alaska” page in each issue, where visitors from around the world are given the opportunity to take a “selfie” with a copy of their magazine wherever they are visiting. It just so happened that in late July or early August of 2020, Rudiak embarked on yet another camping adventure to the Northeastern Most State, otherwise known as the Pine Tree State.

Up in Quoddy Head State Park, Lubec, Maine, Rudiak decided he would take part, and shot that photo with his beloved magazine at hand. He submitted his picture to Alaska, and they published it, along with a Rudiak’s small write-up talking about his trip, in the current February 2021 issue out on newsstands.

“They have a page where people from all around the world submit their photo with the magazine, and I just thought that was such a great idea. It’s always the first page I go to when I get a new copy in the mail,” Rudiak explained. “I’m a photographer, and spring, summer and fall, I do a lot of camping (and taking photos). I was able to do a trip this summer where I could keep proper social distance and camped up in Quoddy Head State Park in Maine. I figured I’ll take a copy of the magazine with me and take a photo of me holding it.”

He said, “I submitted the photo to the magazine in September, and had checked every issue since, but was disappointed to find out it hadn’t made it in yet. I was wondering if they’d even use it, but then yesterday (Jan. 5), I got my new copy out of the mailbox, opened it up to the page, and was like, ‘Yes, I made it!’ Rome, N.Y. and I made it into the February issue of Alaska magazine.”

Rudiak then went on to share some of the special memories from his 2019 Alaska trip. He said he had dreamed of visiting the northernmost state since he can remember.

“I had my expectations of what it may be like, but it went well beyond,” said Rudiak fondly. “It’s just an absolutely beautiful place and the people there are very open and welcoming, always giving advice on what to see and do. Everyone there told me, ‘You can’t just do one trip. You’ll come back.’ And they couldn’t be more right, I definitely want to go back. Within the next two years I’m hoping I can go again.”

During his stay, Rudiak got the opportunity to go on a fishing adventure where he reeled in a gigantic 30-pound halibut, in addition to some smaller fish for his day’s catch. He went in mid-May, which is around the end of the winter season for Alaska. Temperatures reached into the upper 40s and low 50s during the day, and dropped to the upper 30s at night during the time, and there was “still a fair amount of snow,” he said.

After hooking the huge halibut, Rudiak would learn what a magnificent catch he really had. He said there were restaurants in the area he visited that would take cuts of whatever catch you had, then cook and serve it to you. He brought one restaurant a few filets but seeing that he was camping out of a rented pickup with a camper top and not spending his overnights in a hotel, he decided to give a large portion of the fish away to others who attended his fishing trip.

“No one on the boat could believe I was just giving it away and they were so grateful,” Rudiak recalled. “I didn’t understand why they were getting so excited over it. Then I went to a store with a fresh seafood counter and saw that they had halibut going for $27.99 a pound. No wonder they were so happy. I ended up giving away probably about $350 worth of halibut to those folks.”

So Rudiak’s Alaska trip turned out to be quite the lifetime experience, and he shared that he was glad to have chosen to go in 2019, rather than wait for 2020. While he usually takes his camping trips solo, Rudiak said he hopes the next time he visits his beloved Alaska he can take a cruise so that his wife can come along and enjoy in his adventures.