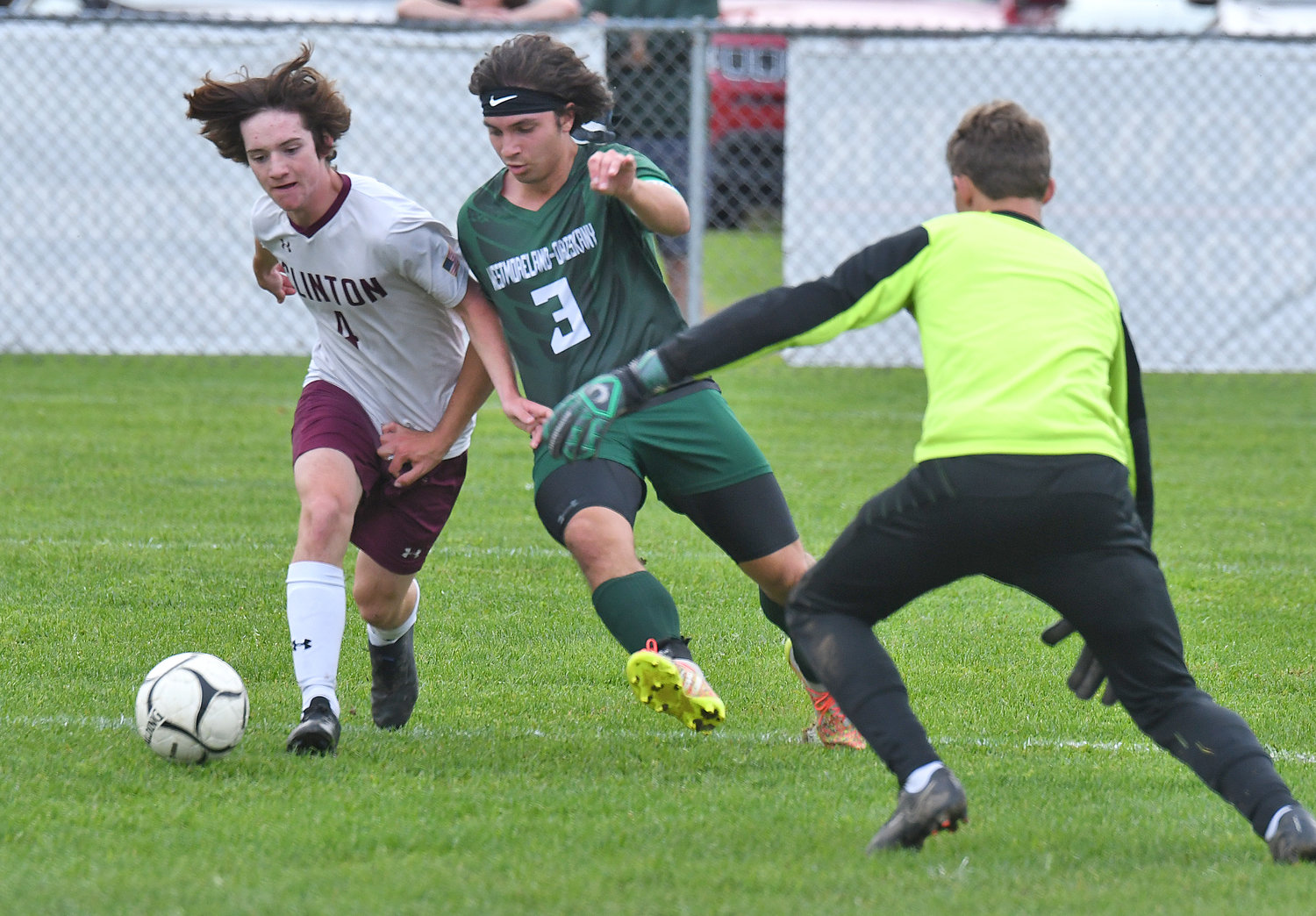 Clinton goalkeeper Matthew King looks to make a save with teammate Sean Schreppel trying to get position on Westmoreland/Oriskany’s Jesse Sweet in the first half Wednesday in Westmoreland. Sweet scored once in the first half and again in the second half to help the Bulldogs to a 2-1 win. That locked up the Center State Conference Division I regular season title.
(Sentinel photo by John Clifford) 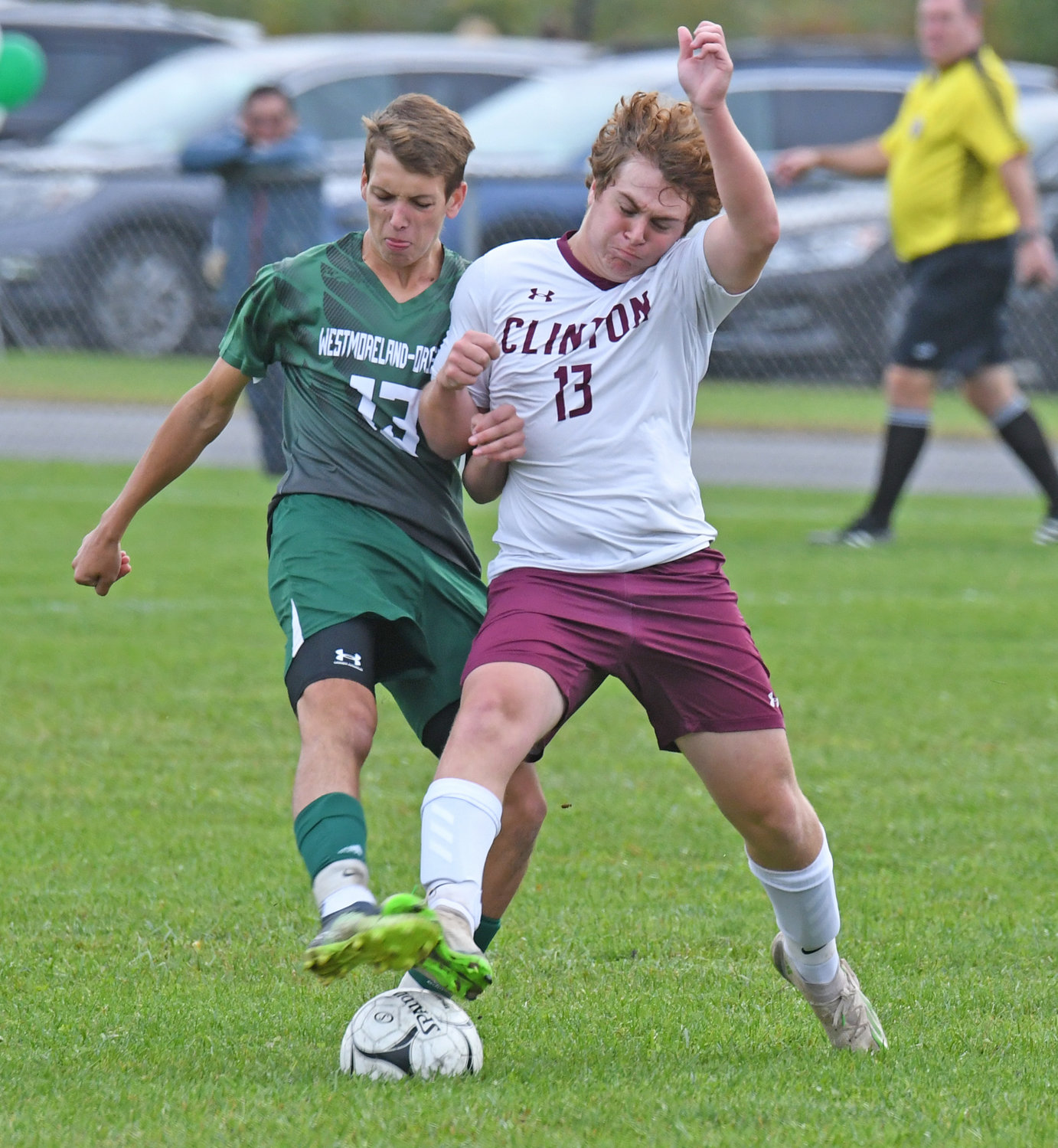 Westmoreland/Oriskany's Tyler Szarek, left, and Clinton's Alec Emery arrive at the ball at the same time in the first half Wednesday at Westmoreland. The hosts won 2-1, clinching the Center State Conference Division I regular season title.
(Sentinel photo by John Clifford) 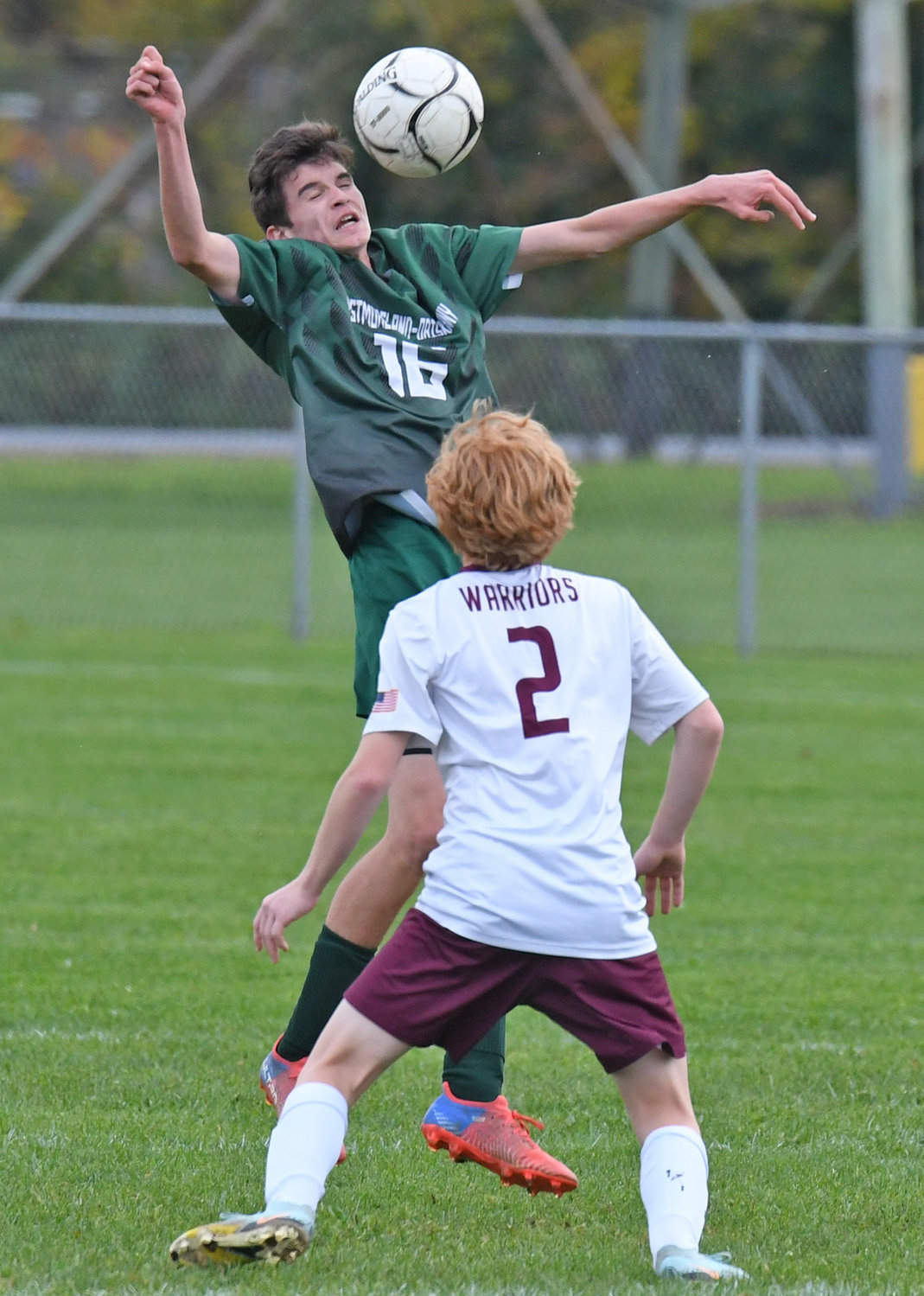 Westmoreland/Oriskany's Riley Smith gets up in the air for the ball in front of Clinton's Henry Schweitzer in the first half Wednesday afternoon in Westmoreland. The host Bulldogs won 2-1 to win the Center State Conference Division I regular season title.
(Sentinel photo by John Clifford) 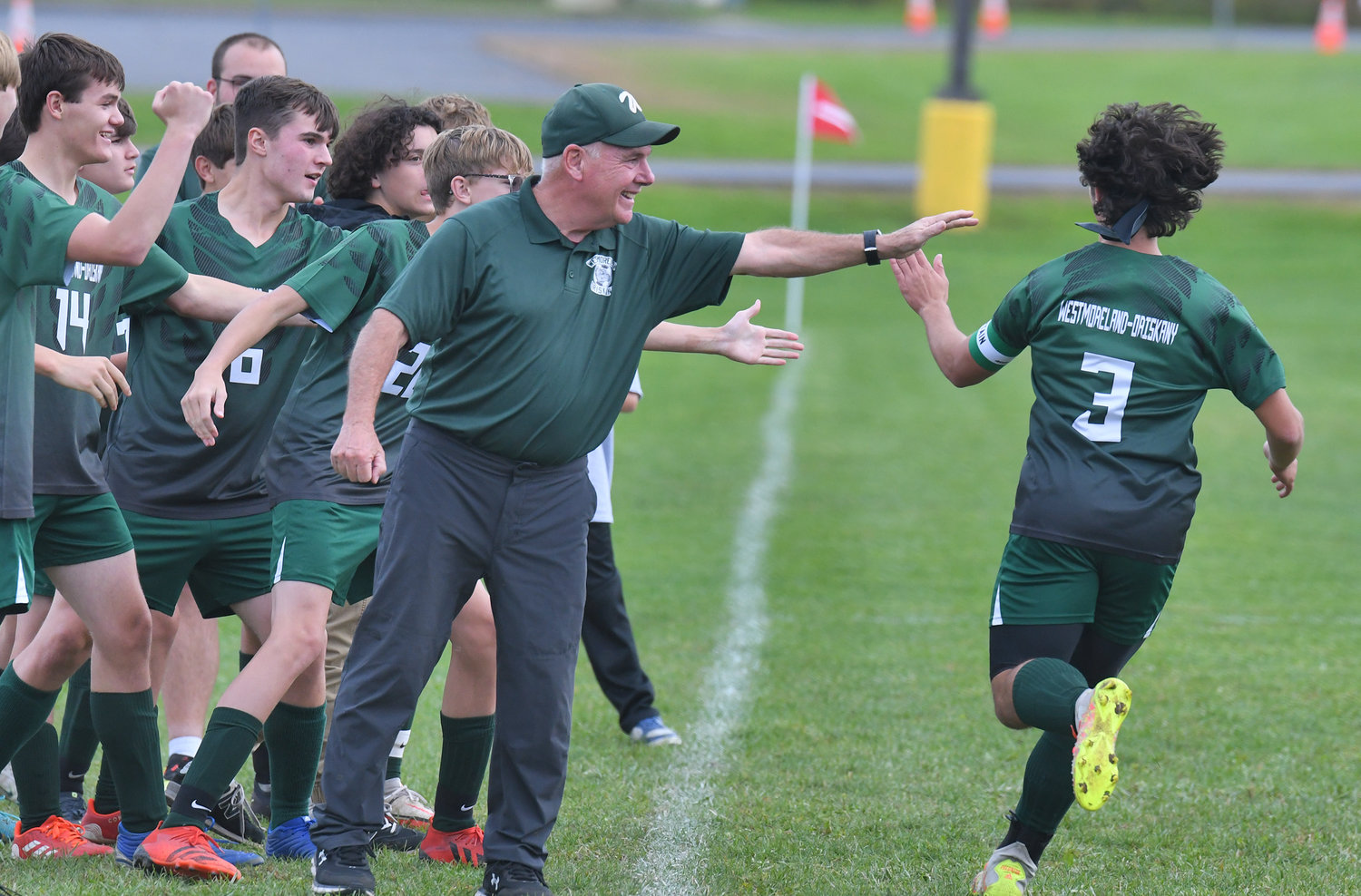 Westmoreland/Oriskany's Jesse Sweet celebrates with the team after scoring the first goal of the game Wednesday afternoon at home against Clinton. Sweet scored again in the second half to break a tie and help the Bulldogs to a 2-1 win. Head coach Gil Palladino is at center.
(Sentinel photo by John Clifford)
Previous Next
Posted Friday, October 14, 2022 7:30 am

Jesse Sweet scored a goal in each half for the Bulldogs, both coming on assists from Anthony Sawanec. The second proved the eventual game winner when he tallied it with 17 minutes left in the game on his Senior Night.

Clinton’s goal by Jimi Alvarez on an assist from Joey Frank equalized for the Warriors in the second half.

Clinton, 6-9, wraps up the regular season with a non-league game at Lowville at noon Saturday.

Roman Harrod scored both goals for Frankfort-Schuyler in the soccer team’s 2-1 win at Herkimer Wednesday in the Center State.

Daniel Shmat assisted on one of the goals and Braydon Matos stopped five shots in net to earn the win.

Shane Maxon scored for the Magicians on an assist from Kyle Carney. Jayden Crandall had 23 saves in goal.

Frankfort ends its regular season hosting Waterville at 6 p.m. today in the league.

The Cooperstown boys soccer team got a 1-0 win at home over Sauquoit Valley Wednesday in the Center State.

The game’s lone goal was scored by Janak Pandit.

Alex Prichard had 14 saves for Sauquoit.

Sauquoit’s regular season ends at Herkimer in the league at 4:30 p.m. today.

Statistics for Adirondack were not provided.

Canastota’s lone goal was scored by Ryan Sanderson on an assist by Raymond Debruque.

Connor Russell made 15 saves for the Raiders.

Adirondack’s final regular season game was at home against Poland Thursday. Results were not available at press time.

Canastota hosts Hamilton in the league at 1:30 p.m. Saturday.

Audrey Moody and Morgan Fusillo scored for the Raiders. Reilly Smith had an assist.

Canastota hosts Proctor for a non-league game at 4:15 p.m. today.

Clinton played a non-league game at Westmoreland Thursday. Results were not available at press time.

Ella Greico scored and assisted on two other goals. Elise Courto, Sarah Cleary and Sienna Holmes scored a goal each. Francesca Sardina-Boisen had an assist.

Emilee Clarey made 15 saves in goal for the Spartans.

Casey Clausen scored for the Warriors. Isabella Irizarry made 13 saves.

Whitesboro ends its regular season with a league game at home against Central Valley Academy at 6 p.m. today.

Drew Kopek and Hannah Lowder scored once each. Lotte Van Heeswijk had an assist.

Jaylene Decker made one save in goal for RFA.

CVA plays at Whitesboro at 6 p.m. today in the league.