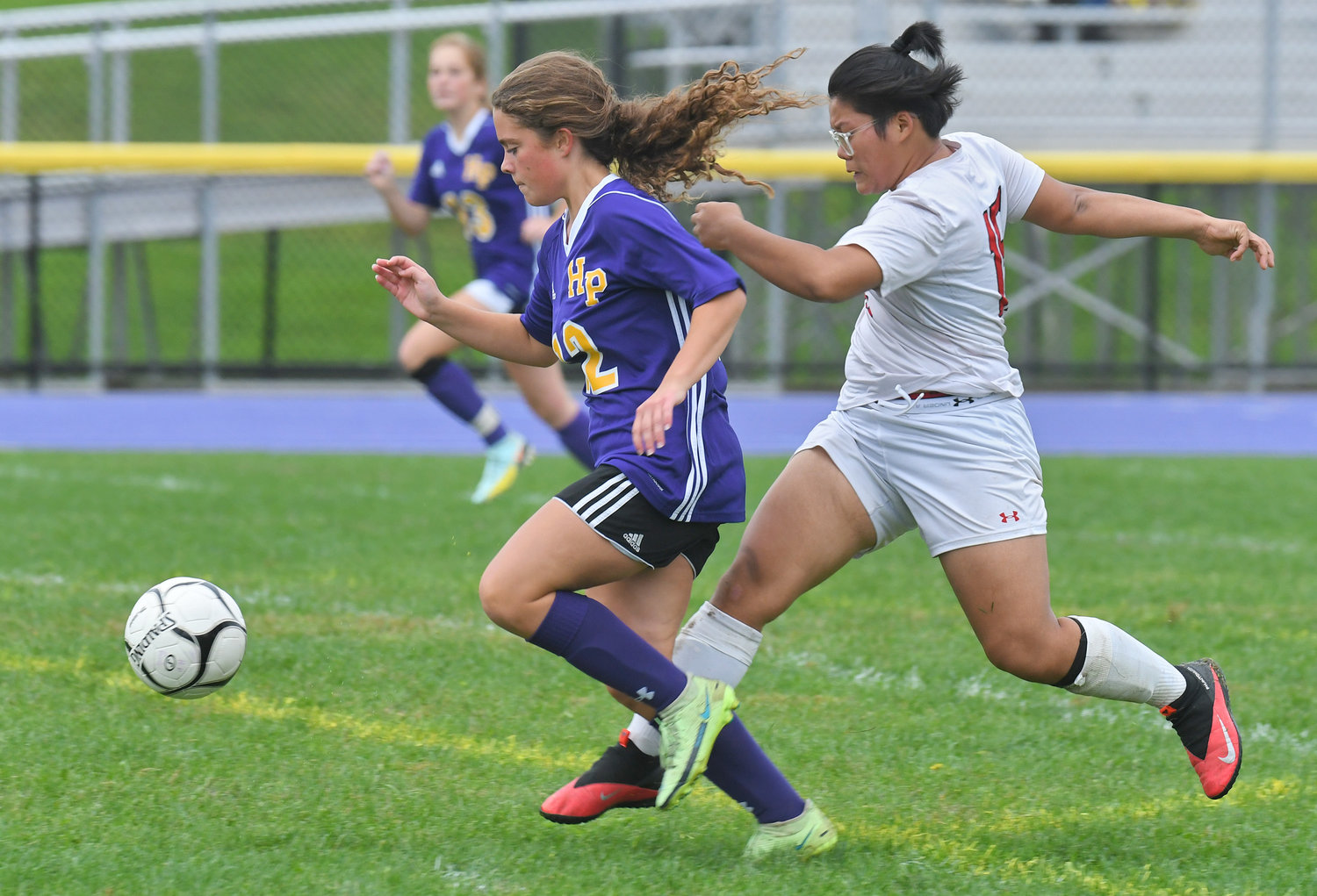 Holland Patent’s Brianna Mullins out runs Proctor’s Hser Eh Ler Paw to the goal and scored the first goal of the game and the only goal in the first half Tuesday at Holland Patent. The hosts won 2-0.
(Sentinel photo by John Clifford) 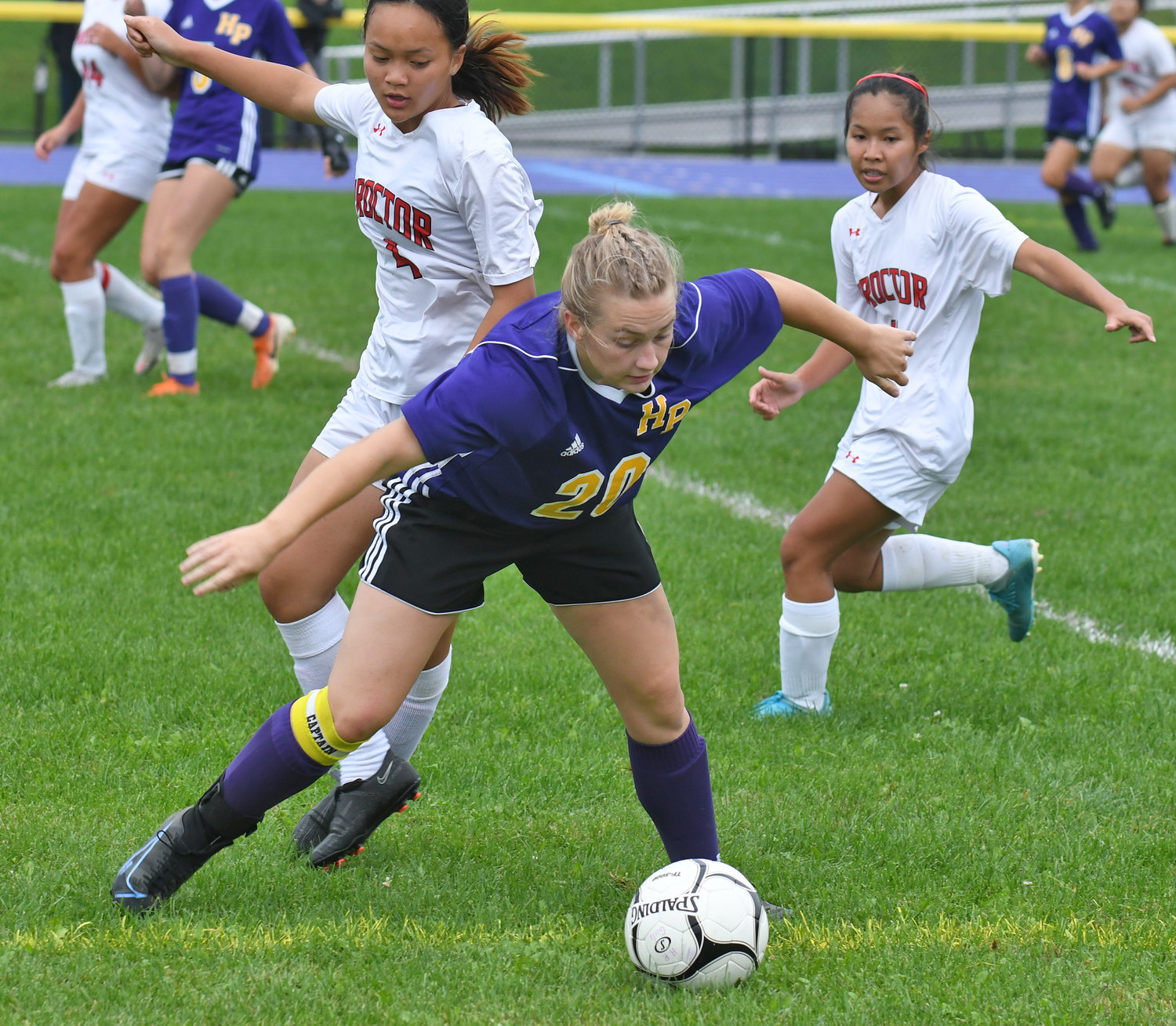 Proctor’s Kimani Thomas gets blocked out by Holland Patent’s Stephanie Grocholski during the first half Tuesday at Holland Patent. Proctor’s Nancy Shine is in the background. Grocholski had an assist in the Golden Knights’ 2-0 win.
(Sentinel photo by John Clifford) 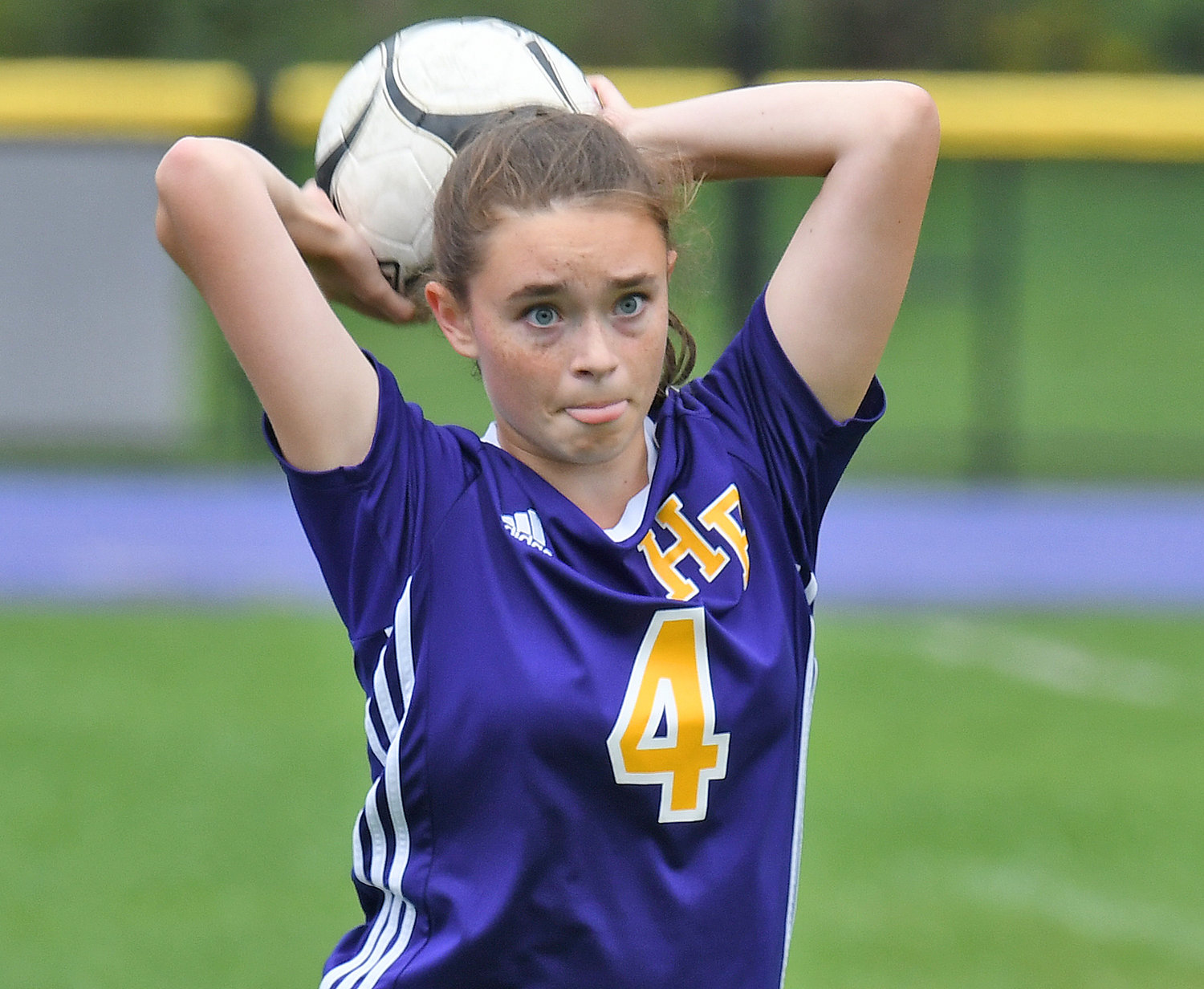 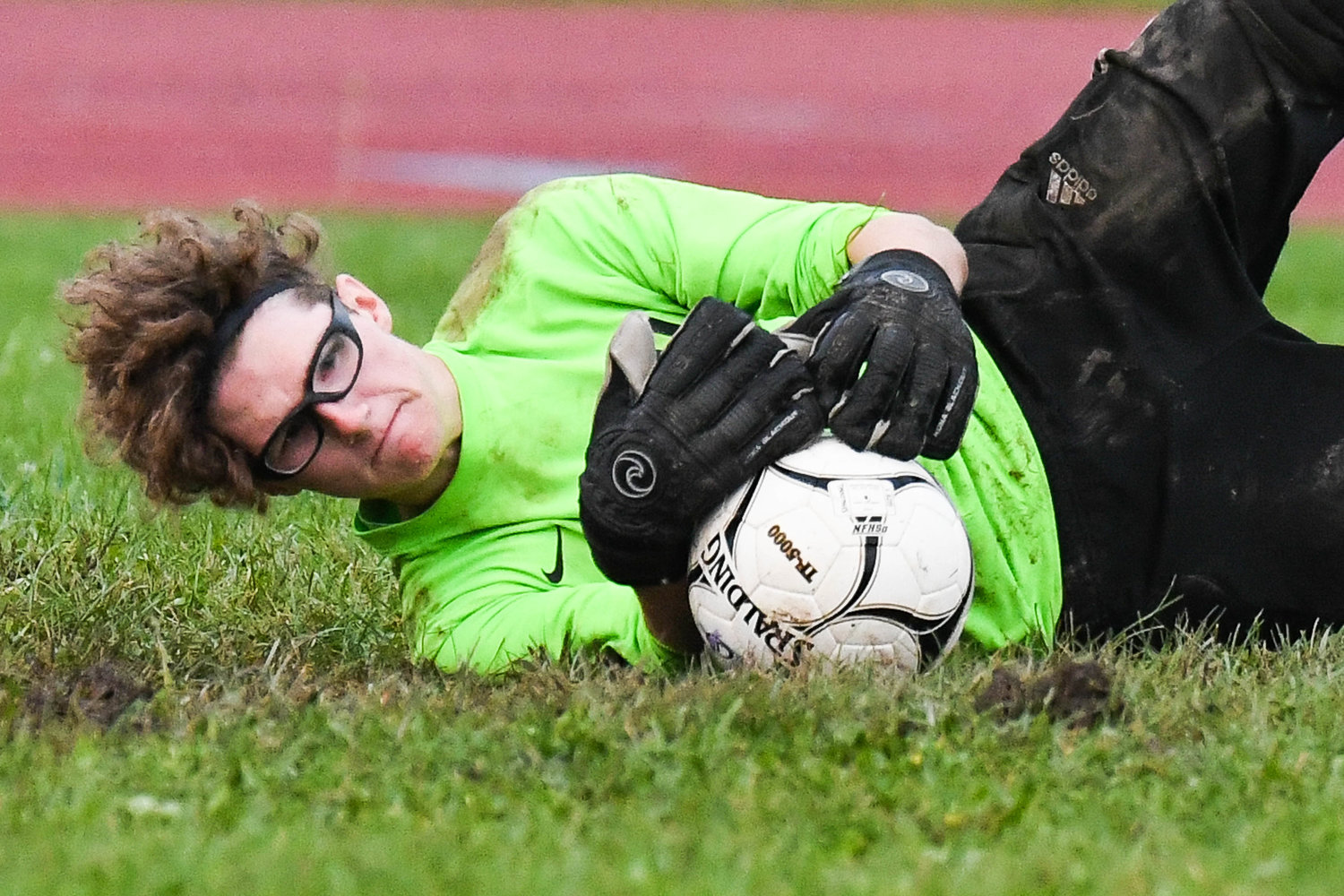 Little Falls goalie James Longwell makes one of his six saves against Clinton on Tuesday. Longwell and the Mounties won 3-1 at home.
(Sentinel photo by Alex Cooper) 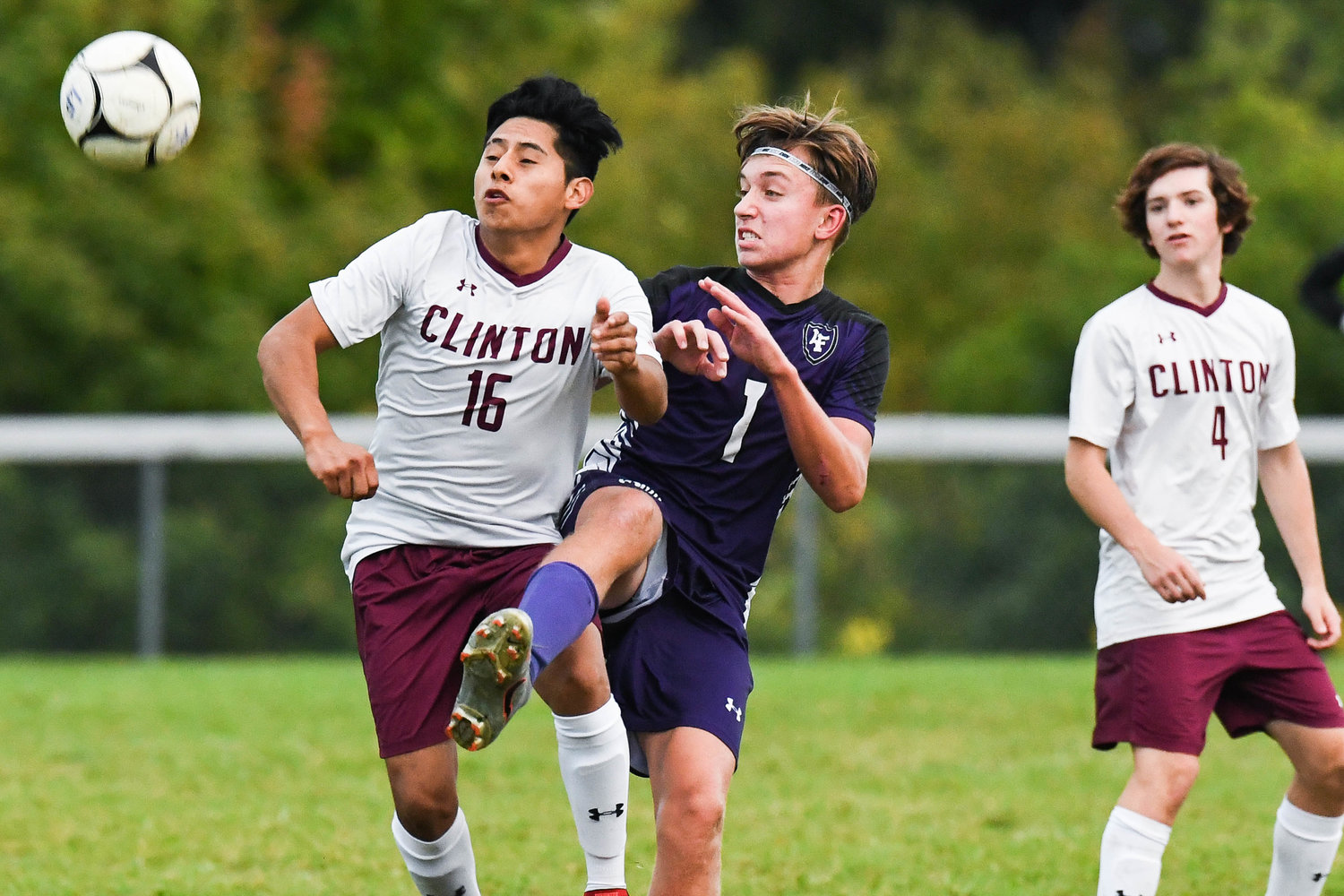 Clinton player Jimi Alvarez (16) fights for control of the ball with Little Falls player Jack Morotti (1) during the game on Tuesday. Morotti scored twice to power the Mounties to a 3-1 win at home.
(Sentinel photo by Alex Cooper) 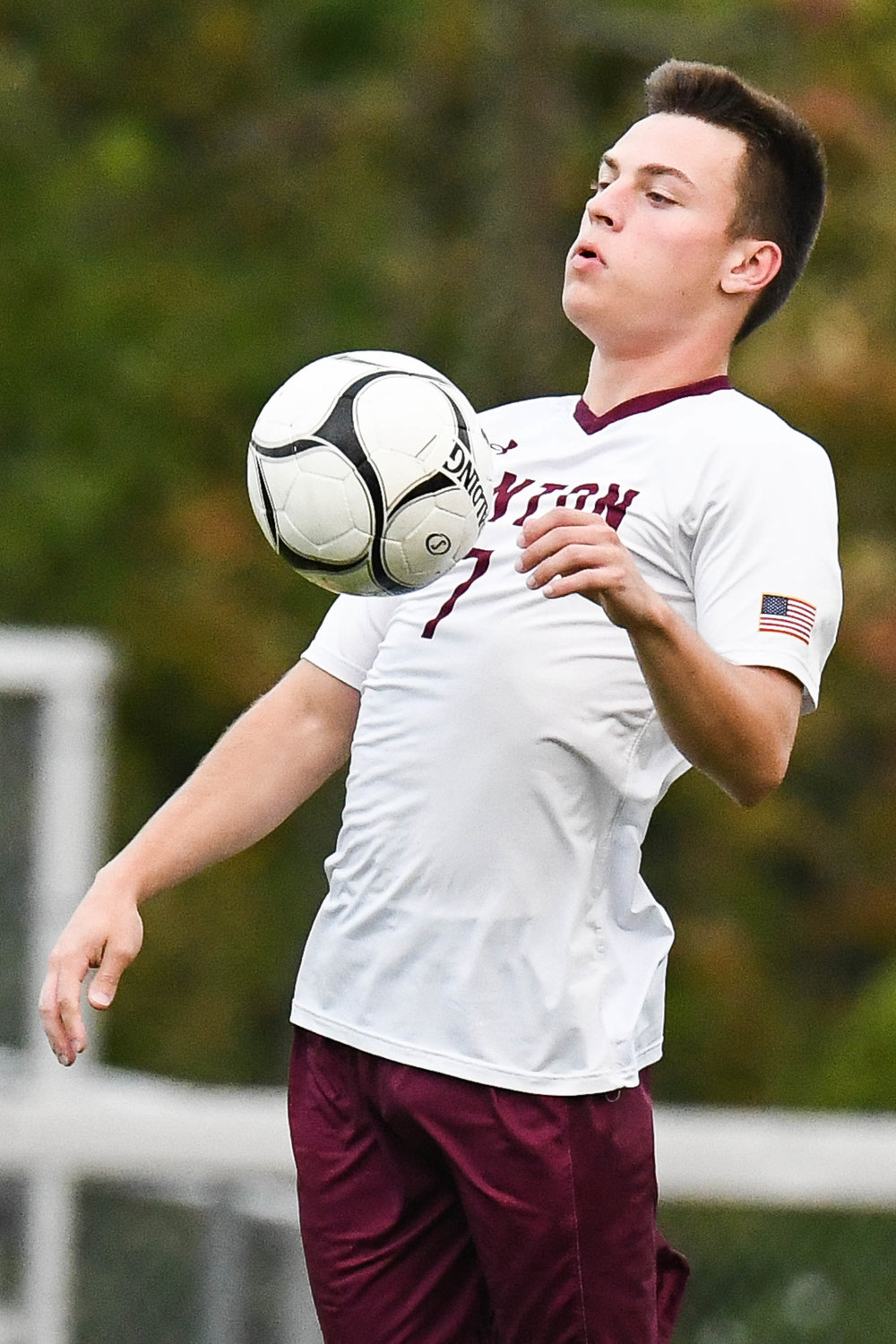 Clinton player Jakob Whitfield settles the ball with his chest during the game against Little Falls on Tuesday. Clinton lost 3-1 on the road.
(Sentinel photo by Alex Cooper) 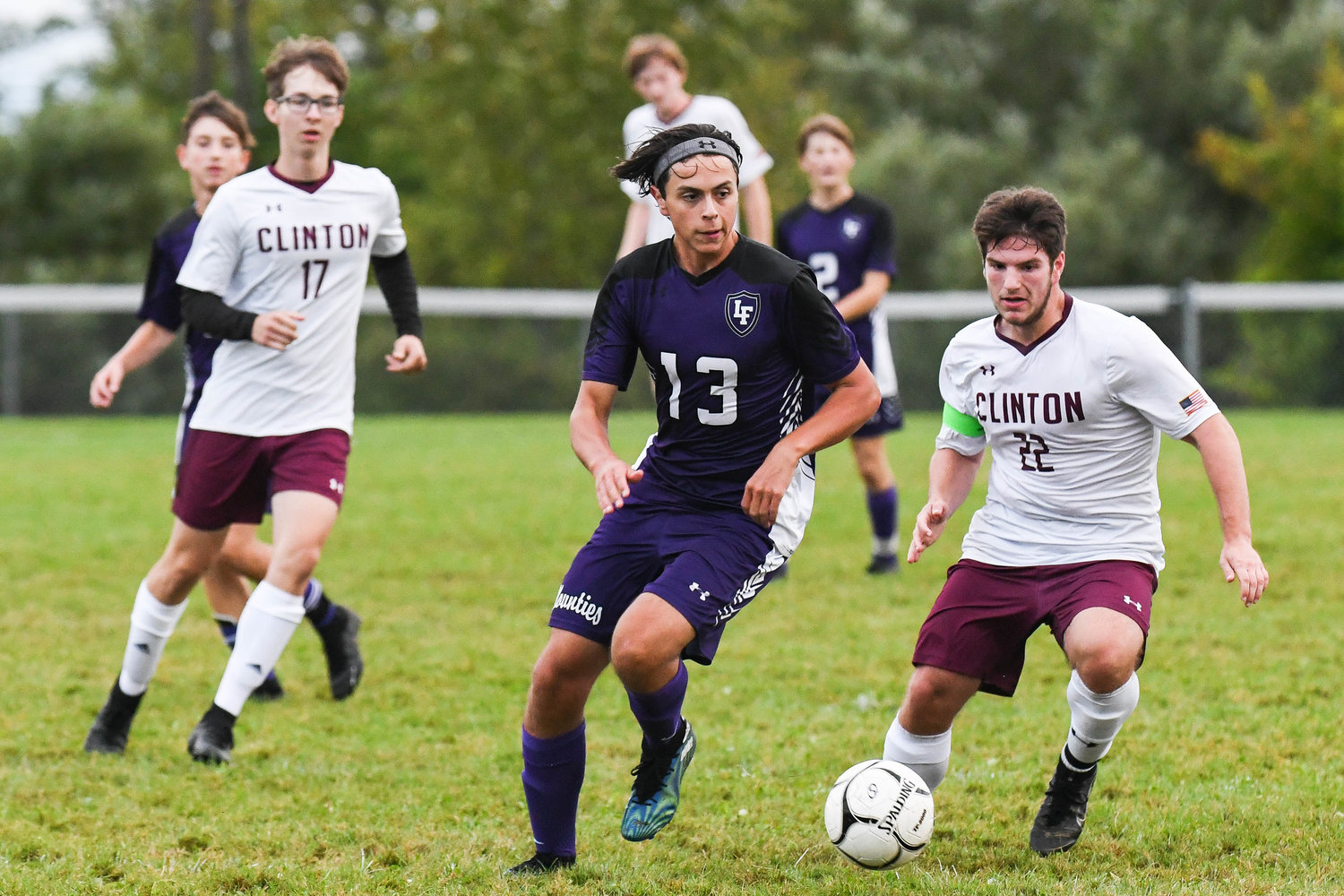 The Westmoreland-Oriskany boys soccer team shut out Adirondack 6-0 Tuesday, with Tyler Szarek’s hat trick accounting for half the goals in the Center State Conference match at home.

The Bulldogs scored three goals in the first half then three more after the break.

Jacob Usyk scored twice for the Bulldogs. Anthony Sawanec had the other goal. Jack Tamburino had three assists. Riley Smith had two. Nick Hays and Jack Tagliaferrri had an assist each.

David Cronauer had a save and Hays had two saves in split time in goal for Westmoreland-Oriskany.

Adirondack goalie statistics were not available.

Westmoreland-Oriskany is now 6-1, and plays at Clinton at 4:30 p.m. today in the league.

Adirondack, 1-6, plays at Canastota tonight at 7 in the league.

Weya Myint had a goal and an assist. Andrew Dischiavo, La Eh Soe and Hussein Abukar had a goal each. Abdi Mohamed collected a pair of assists. Abdukadir Mohamed, Sharif Ali and Alan Catic had an assist each.

The Raiders built a 6-0 halftime advantage.

Proctor’s Asim Gacic had one save and Nadil Ramic had five in split time.

Proctor plays a league game at Whitesboro today at 4:30 p.m.

Scoring for the Spartans were Pepe Aragon, Ashton Giambrone, Aly Radwan and Chase Giambrone. Noah Partenza had an assist.

Chris Suriano made two saves for the shutout.

Statistics for CVA were not submitted.

New Hartford hosts RFA at 6 p.m. today in the league.

The Mount Markham boys soccer team got a 2-0 win against host Sauquoit Valley Tuesday in the Center State Conference.

Ryan Denton and Arjay Piersma scored for the Mustangs. Will Lunny had an assist.

In goal, Nate Pcola had three saves to earn the shutout.

Alex Prichard made 15 saves for the hosts.

Sauquoit hosts Cooperstown at 7 tonight in the league.

RFA statistics were not submitted.

Jugglers’ goalkeeper Vita Waters had 15 saves in the game.

The New Hartford girls soccer team’s unbeaten streak is now 45 games after the team’s 3-0 win at CVA Tuesday in the Tri-Valley.

The Spartans scored all their goals in the first half. Biddue Clive, Alex Volo and Anna Rayhill each tallied for the Spartans. Sophia and Talia Vitullo had an assist each.

Savannah Cole made three saves in net for New Hartford.

CVA did not submit statistics.

The defending Class A state champions improve to 7-0-1 overall and 6-0 in the TVL. The team travels to RFA for a 4:15 p.m. game today in the league.

The Red Devils scored all three goals in the second quarter.

Carmella Garcia scored and had an assist. Also scoring a goal each were Meredith Guertin and Grace Croft.

The Herkimer field hockey team dropped a 1-0 game to Morrisville-Eaton in the Center State Tuesday at home.

Julie Tomcho scored for Morrisville in the second quarter with an assist from Addison Shantel.

Irene Richardson had two saves in goal for Morrisville.

Hannah Minguela made five saves for the Magicians, who visit Mount Markham at 4:30 p.m. Monday.

In the girls race, Whitesboro outscored VVS 24 to 33, defeated Camden 15 to 50 and put up 15 points against and incomplete result by HP. VVS topped Camden 19 to 26.

The boys race winner was Killian Bauer of VVS in 18:57. The rest of the top 10 were Seth Stevens of Whitesboro, Ben Bellinger of VVS, Nathan Geroux of VVS, Andrew Kanclerz of HP, Connor Perrotta of Camden, Justin DiGiorgio of Whitesboro, VVS’ Rowan Planck, David Mathewson of HP and Elijah Jackson of Camden.

The RFA boys and girls cross country teams posted big performances at the cross country race hosted by Oneida Tuesday. Marlo Townsend won the girls race for RFA and Carson Campbell was second for the Black Knights in the boys race.

Townsend’s top time was 20:51. Her teammates’ finishes were: Julissa Luciano in third, Gianna Badolato in fifth, Shannen Calandra in sixth, Sofia Melone in eighth, Shavaia Parry in 12th and Caitlin Platis in 15th.

Tyson Fuller of Oneida won in 18:19. RFA’s other finishers after Campbell were: Karl vanHoesel in third, Ethan Baker in fourth, Grady Engelbert in fifth, Nick Toth - Ratazzi in eighth, Luke Pelton in 12th and Jonathyn Langone in 13th.