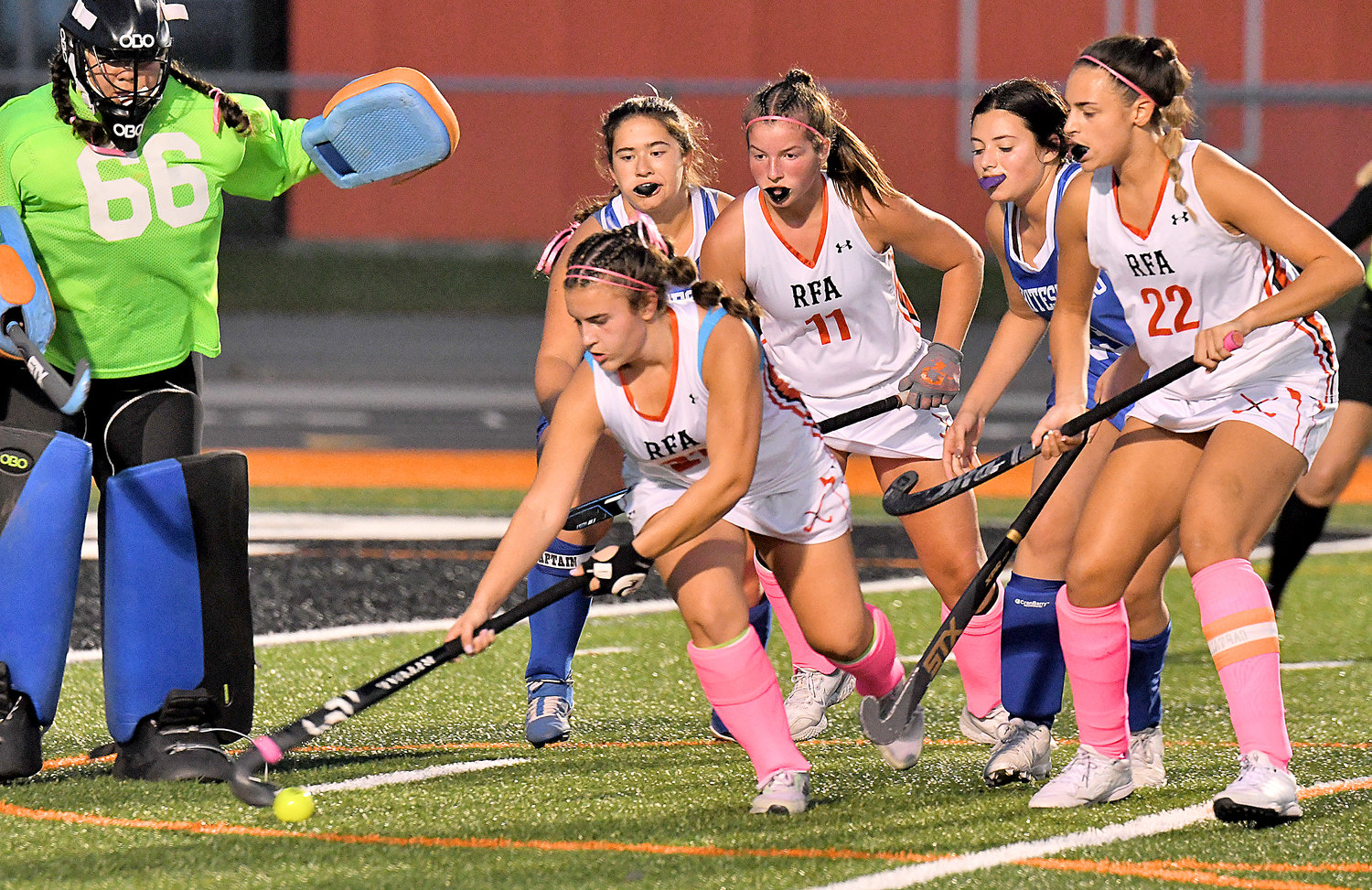 Cara Mecca prepares for a shot against Whitesboro goalie Isabella Irizarry with Rome Free Academy players Hannah Lowder (11) and Drew Kopek (22) and Whitesboro’s Gabrielle St. Pierre, left, and Danielle Mazza looking on in the first half Wednesday night at RFA Stadium. The host Black Knights won 8-0. Kopek had a goal and an assist while Mecca and Lowder had one goal each.
(Sentinel photo by John Clifford) 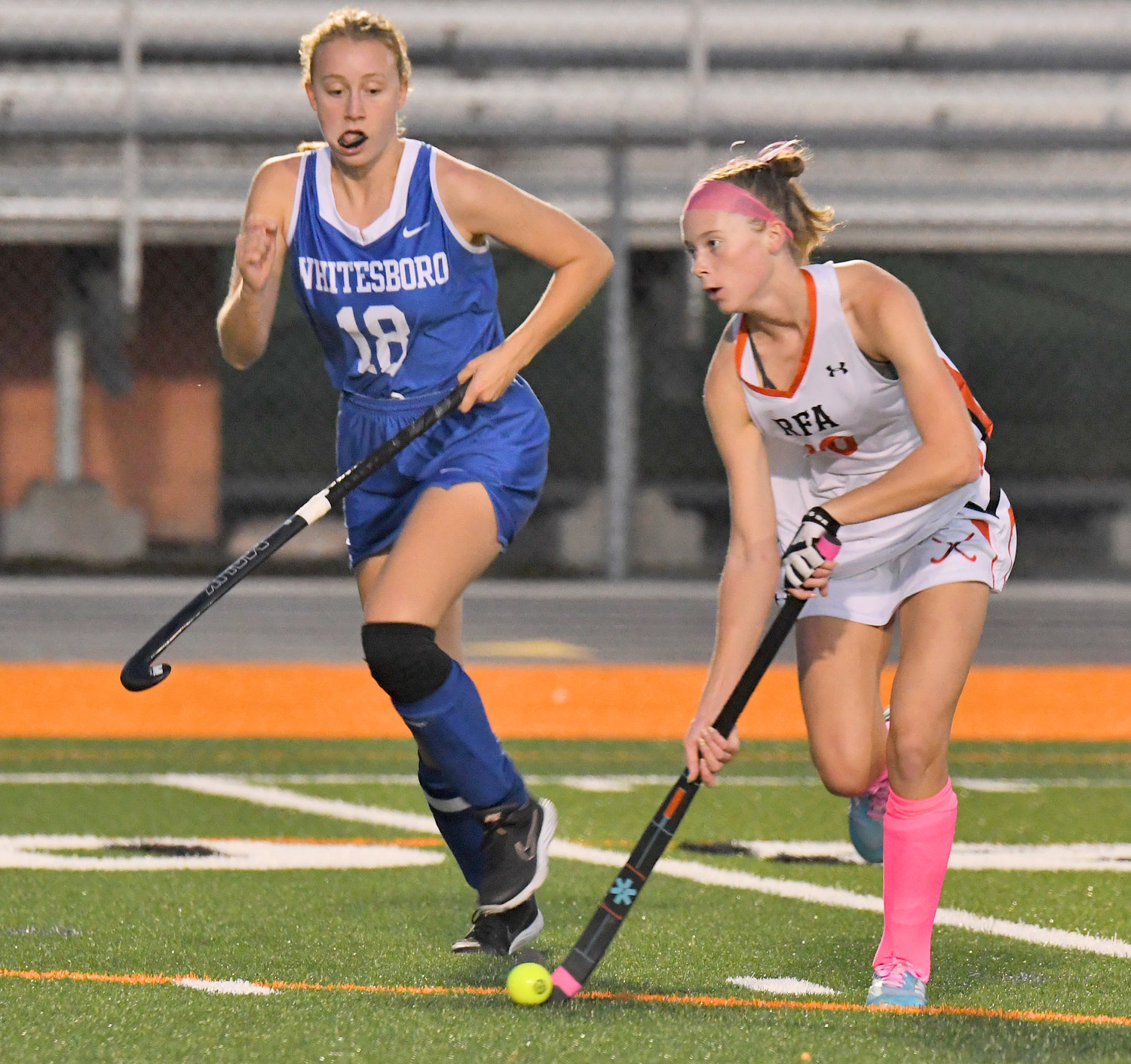 Rome Free Academy's Fiona McMahon looks downfield with Whitesboro's Riley Collis in pursuit in the first half at RFA Stadium Wednesday night. RFA won 8-0 and McMahon had one of the goals.
(Sentinel photo by John Clifford) 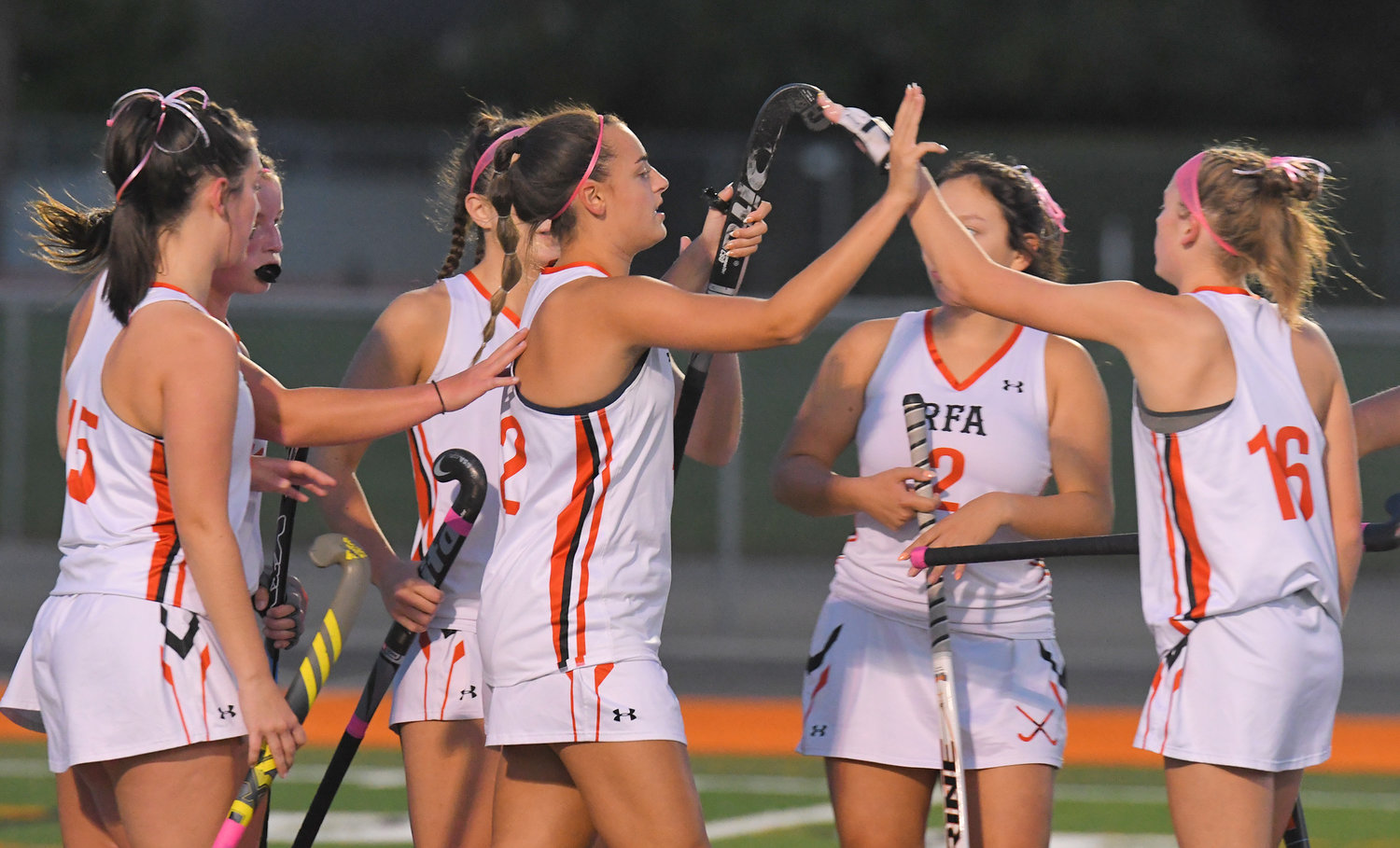 The Rome Free Academy field hockey team celebrates a goal by Drew Kopek in the first half of the team's 8-0 win over Whitesboro Wednesday at RFA Stadium. They are, from left: Emma Wright, Hannah Lowder, Alyssa Nardslico, Kopek, Alyce Frost and Fiona McMahon.
(Sentinel photo by John Clifford) 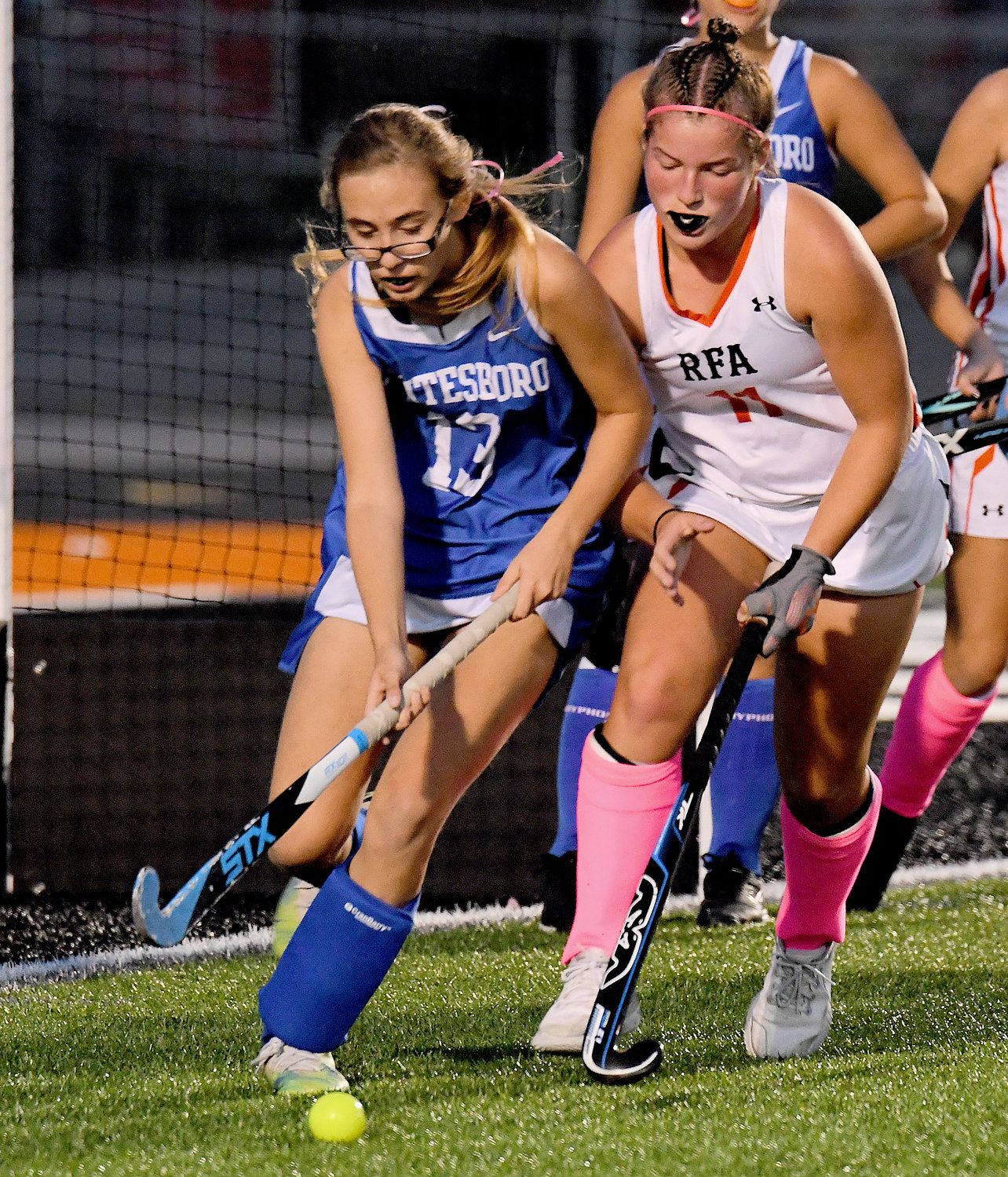 Avery Davis of Whitesboro tries to clear the ball from the Blue Devils' goal with Rome Free Academy's Hannah Lowder looking to get the ball back in the first half at RFA Stadium Wednesday night. RFA won 8-0 and Lowder scored once.
(Sentinel photo by John Clifford)
Previous Next
Posted Friday, October 7, 2022 8:00 am

The Rome Free Academy field hockey team scored early and often in an 8-0 home win over Whitesboro in the Tri-Valley League Wednesday.

Jillian Buczkowski had two saves and Jaylene Decker made one in split time for RFA.

Whitesboro plays a league game at Camden at 3:30 p.m. today.

Madison Oliver scored five times for Holland Patent in a 7-0 field hockey win at Camden in the TVL Wednesday.

HP plays at Liverpool at noon Monday in non-league play.

Camden hosts Whitesboro at 3:30 p.m. today in the league.

Greico scores for in Spartans’ win

Morgan Russo made 17 saves for CVA.

VVS gets five goals from five players in win

Five different players contributed a goal each in a 5-0 win by Vernon-Verona-Sherrill field hockey at Oneida in the TVL Wednesday.

Grace Croft and Carmella Garcia had a goal and an assist each. Meredith Guertin, Camryn Shea and Samantha Nelson also scored. Aaliyah Sequin and Natalie Herzog had an assist each.

Bethany Honness had 16 saves in goal for Oneida.

Oneida played a league game at CVA Thursday. Results were not available at press time.

The New Hardford girls soccer team stayed unbeaten Wednesday, allowing just its third goal in a dozen games this season. The Spartans beat Whitesboro 4-1 on the road in the TVL.

Anna Rayhill had a hat trick and Sophia Vitullo added one goal. Amanda Graziano and Erin Cahill had an assist each.

Hannah Philips scored on on assist from Hannah Smith for the Warriors.

Megan Williams made 10 saves in goal for Whitesboro.

The Spartans are now 11-0-1 on the season (9-0 in the league) and extended their unbeaten streak to 49. The defending Class A state champs hosted Utica-Notre Dame Thursday. Results were not available at press time.

Whitesboro played a league game at Camden Thursday. Results were not available at press time.

Statistics for Frankfort were not submitted.

Olivia Moore scored on an assist from Samantha Ferguson for the Bulldogs.

In goal, Nya Marsh made three saves for Westmoreland

Frankfort hosts Herkimer in the league at 6 p.m. Tuesday.

Westmoreland hosts Dolgeville in the league at 4:30 p.m. Tuesday.

The top three places in the girls race at a five-team cross country meet Wednesday were taken by Westmoreland runners.