Check out these recent highlights. 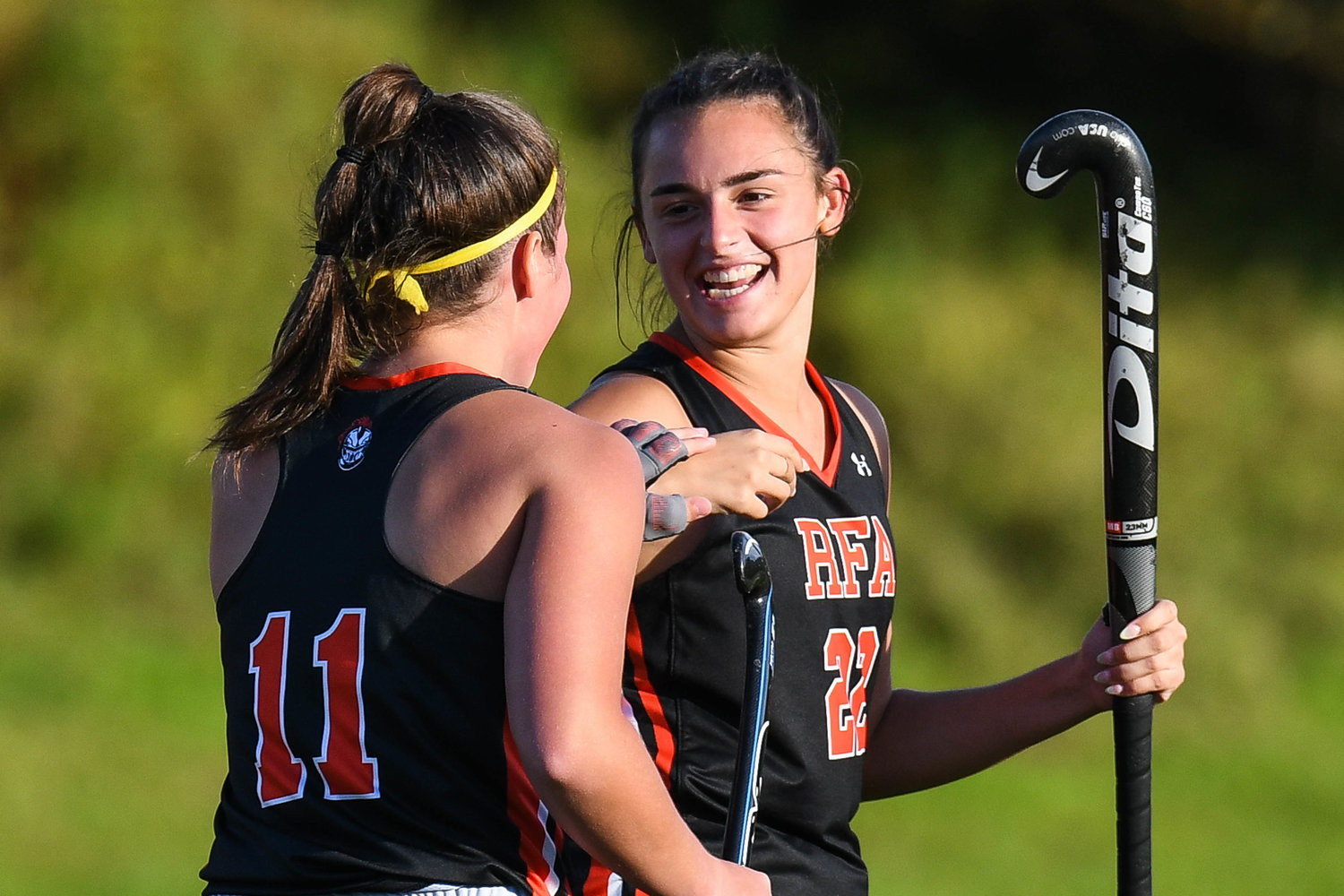 From left, Rome Free Academy player Hannah Lowder (11) celebrates a goal with teammate Drew Kopek (22) during the game against Central Valley Academy on Monday in Ilion. Kopek also scored twice and had an assist in RFA’s 6-0 win.
(Sentinel photo by Alex Cooper) 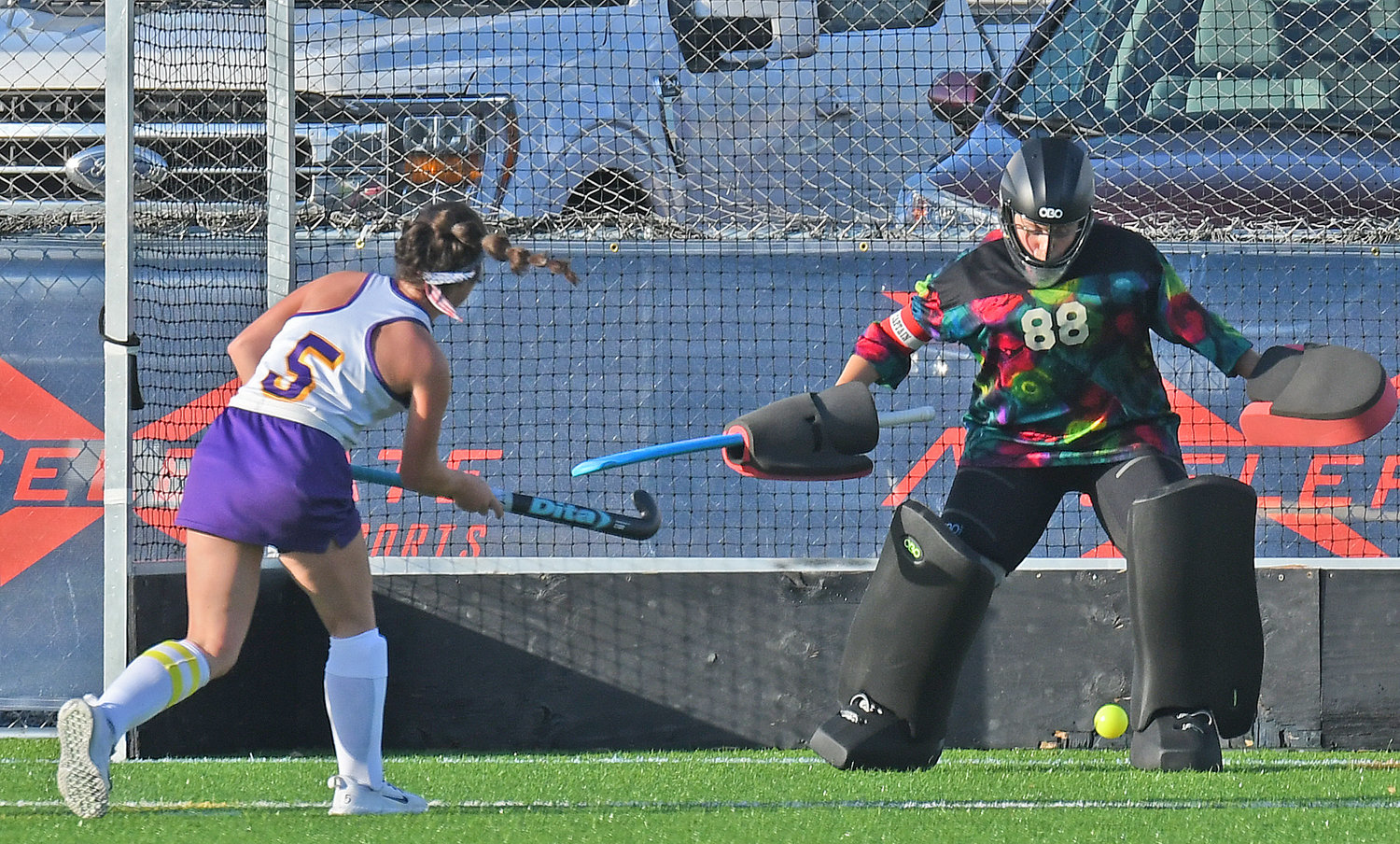 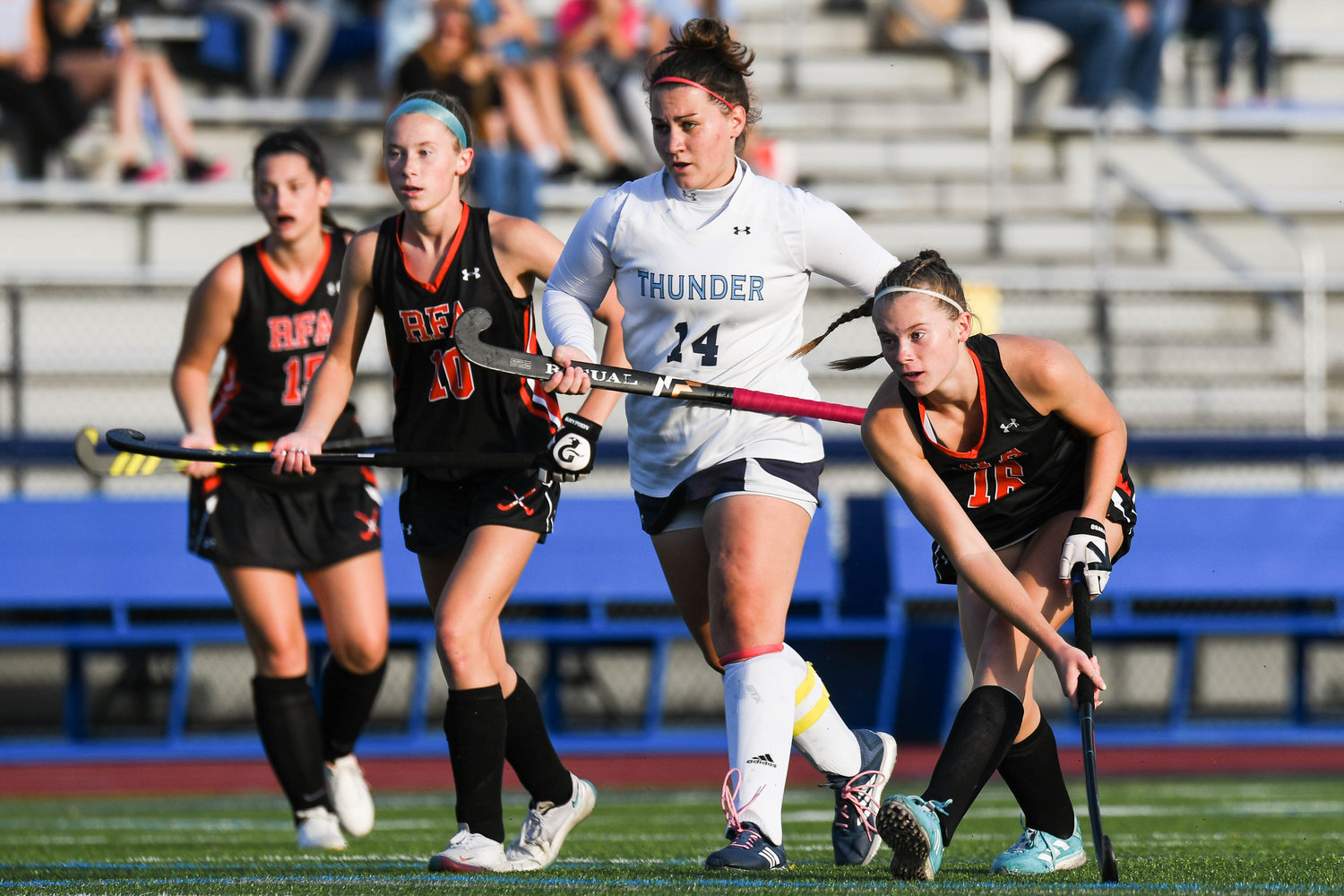 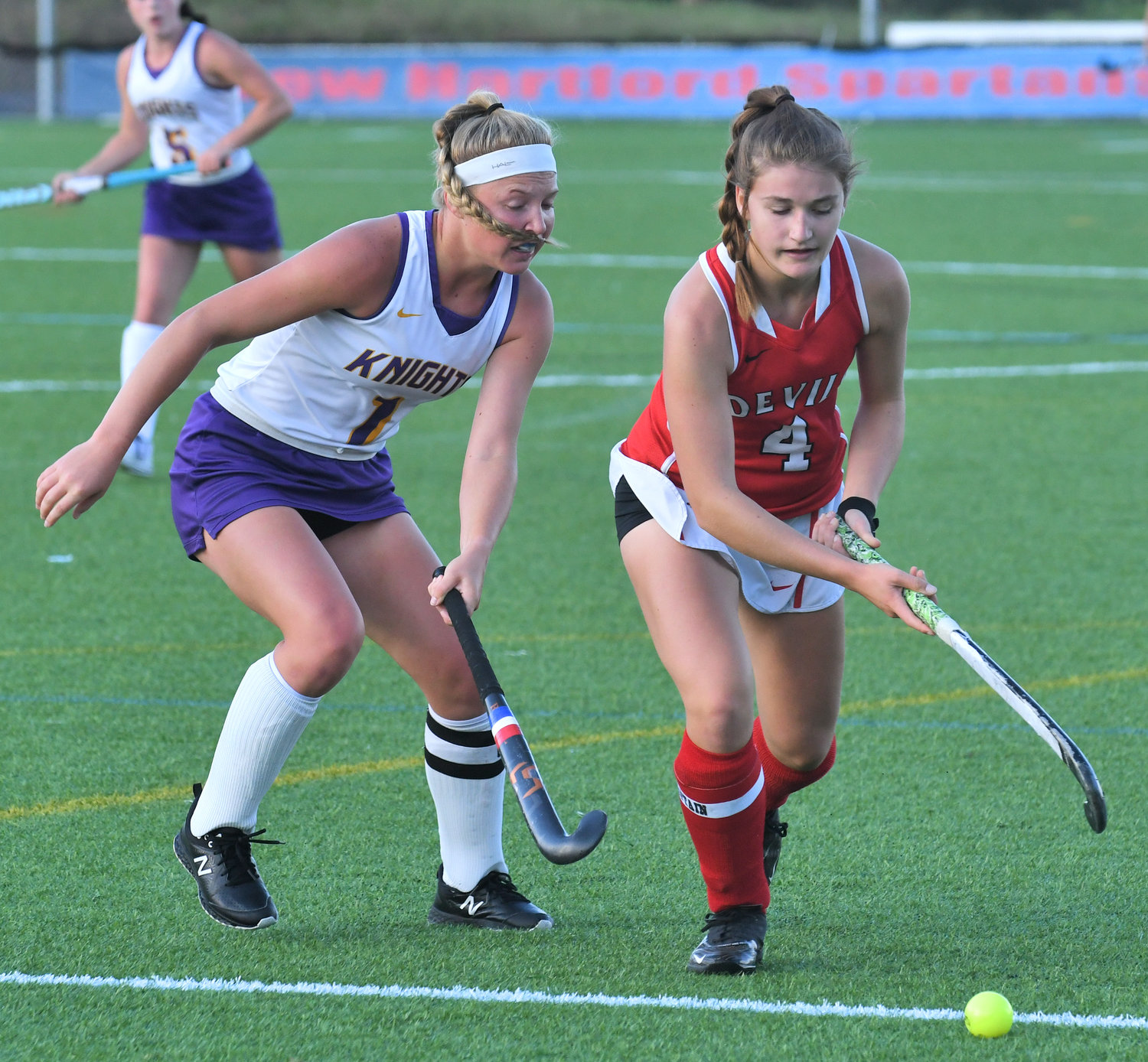 Holland Patent's Margaret Cummings and and Vernon-Verona-Sherrill's Grace Croft look to control the ball Monday at Accelerate Sports Complex. Cummings scored a goal and had an assist in the Golden Knights' 6-0 win.
(Sentinel photo by John Clifford) 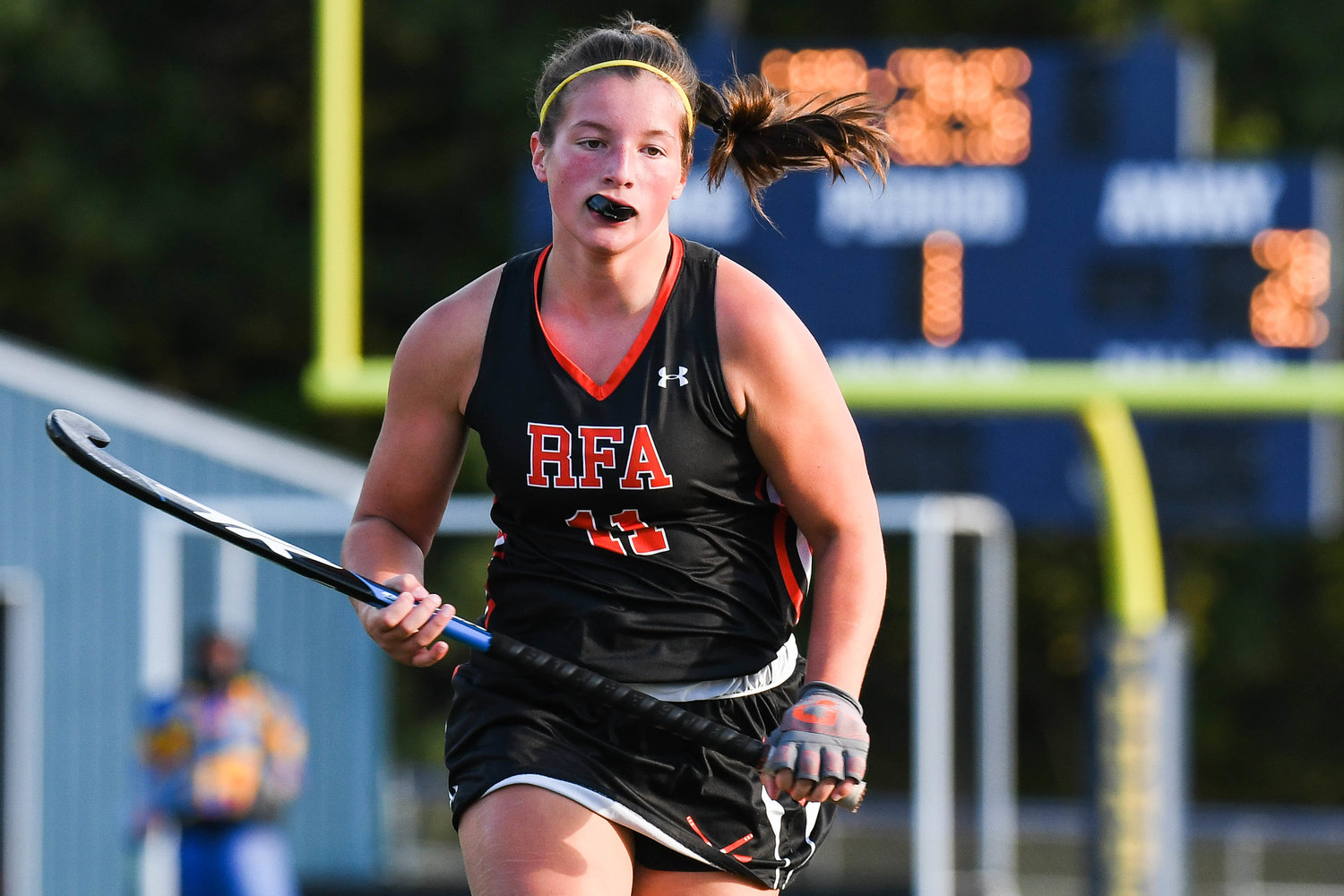 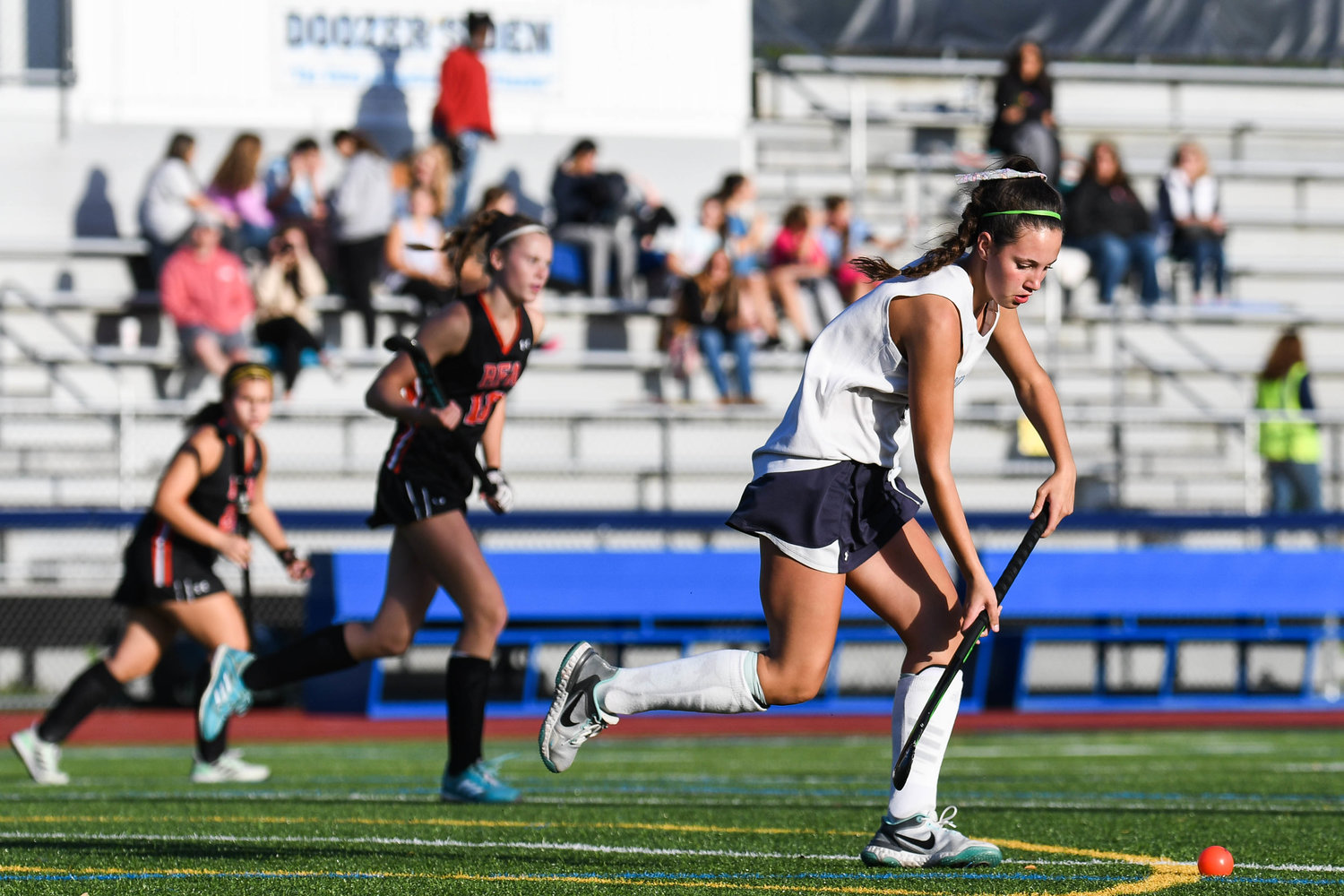 Central Valley Academy player Tria Rowland moves the ball up the field during the game against Rome Free Academy on Monday in Ilion.
(Sentinel photo by Alex Cooper) 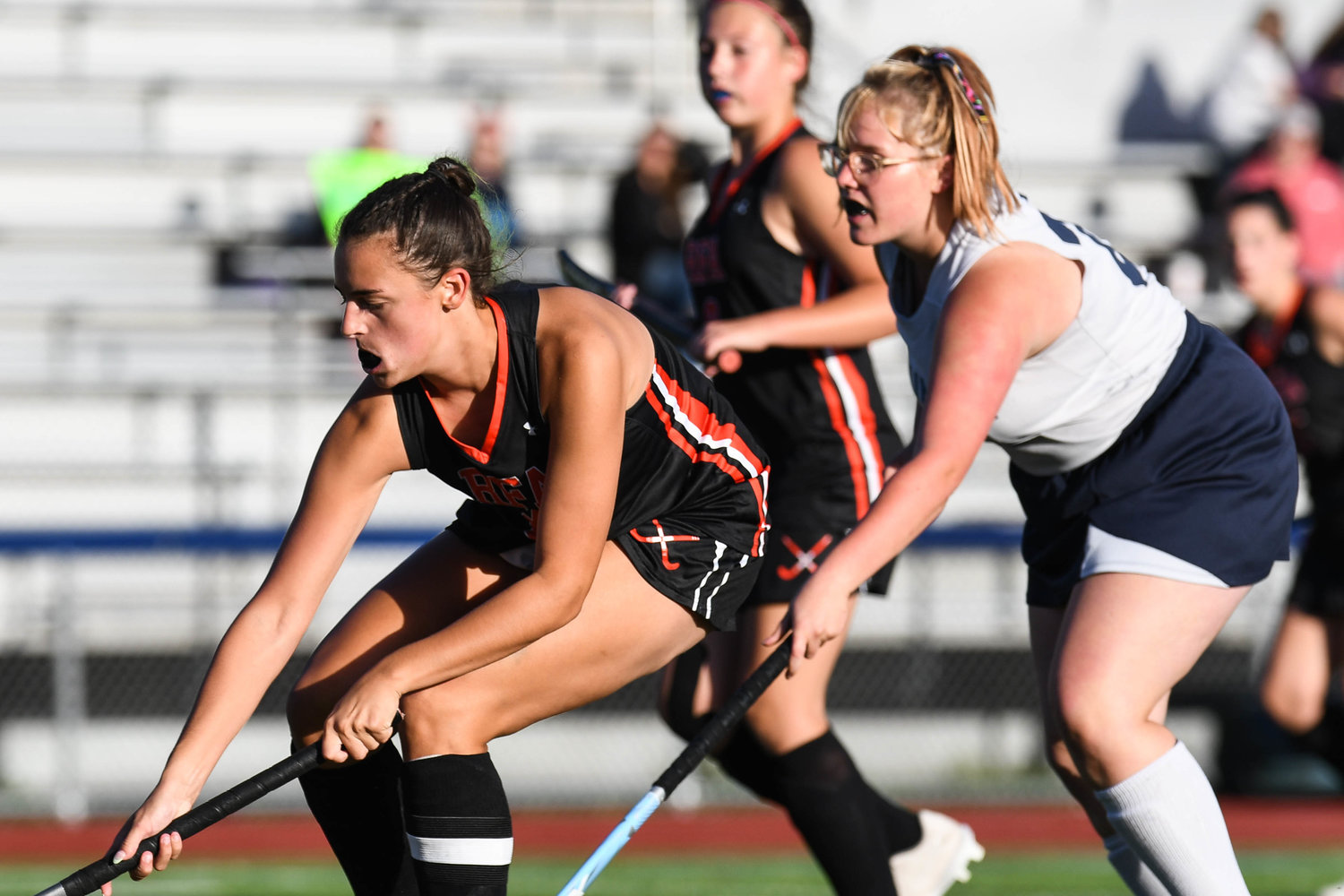 Rome Free Academy player Drew Kopek moves the ball toward the net during the game against Central Valley Academy on Monday in Ilion.
(Sentinel photo by Alex Cooper) 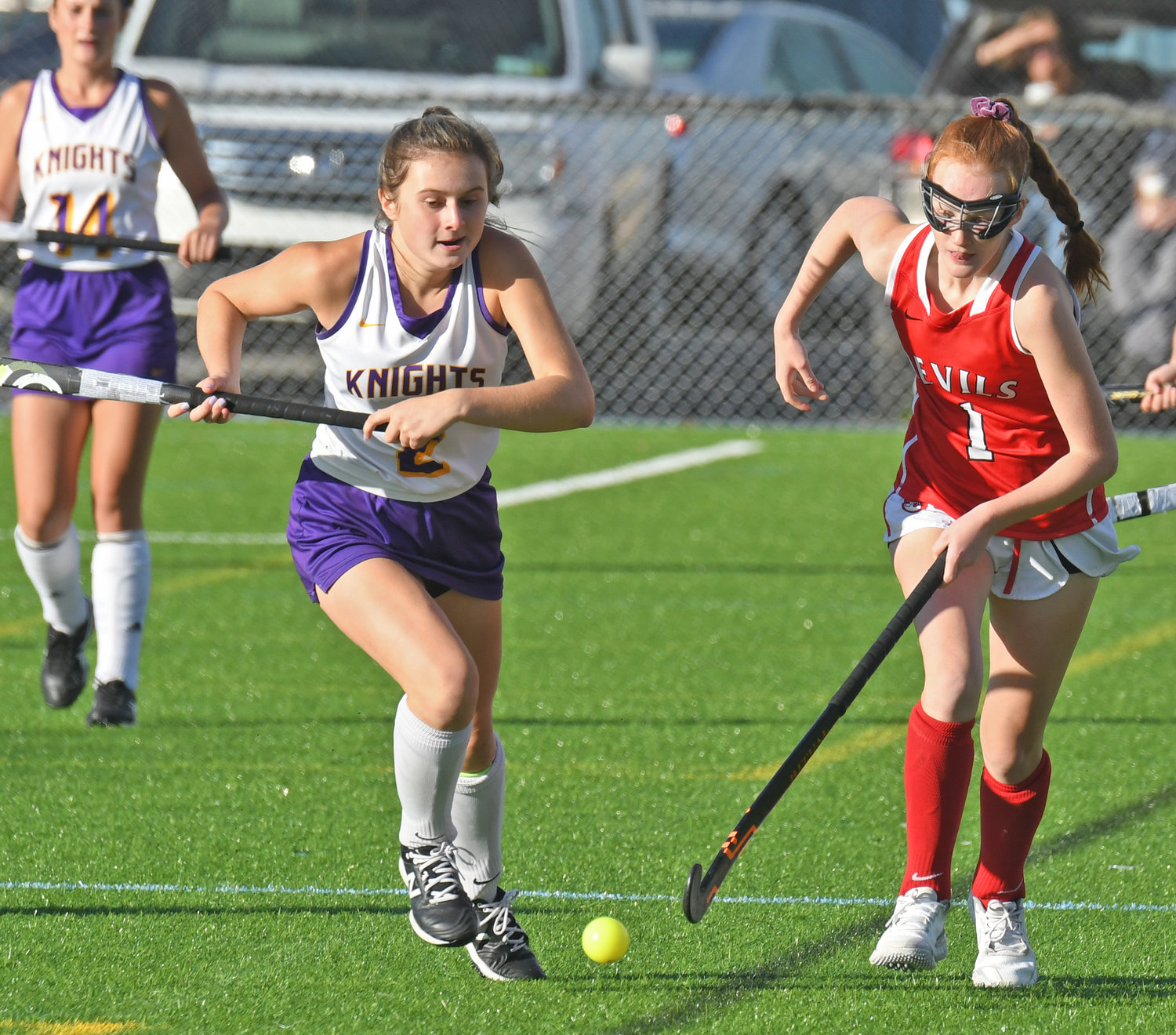 The Rome Free Academy field hockey team put 31 shots on goal in a 6-0 win at Central Valley Academy Monday in the Tri-Valley League.

The Black Knights scored four times in the first quarter to take control as the defense held the Thunder to two shots on goal for the game.

Drew Kopek scored twice and had an assist for the Black Knights. Isibeal McMahon scored and assisted on three more goals. Alex Thompson, Hannah Lowder and Gracie Paccica all scored a goal as well. Fiona McMahon had an assist.

Jillian Buczkowski made two saves in goal for RFA.

Morgan Russo had 25 saves for CVA.

Ella Greico scored four goals and added an assist in a 9-1 win for New Hartford field hockey at home against Whitesboro in the TVL.

Sienna Holmes scored twice for the Spartans. Grace McNamara had a goal and an assist. Elise Courto and Bella Kolb also scored. Sarah Cleary had a pair of assists.

For the Warriors, Antonia DiCesare scored on an assist from Gianna Ross.

Whitesboro plays at CVA at 4:30 p.m. today in the league.

The Holland Patent field hockey team got a 6-0 home win in the TVL Monday against Vernon-Verona-Sherrill.

Madison Oliver scored twice for HP. Maggie Cummings scored and had an assist. Michaela Cushman, Abby Draper and Izzy Stalker scored a goal each. Zoe Kelly had a pair of assists and Cassidy Reader also collected an assist.

VVS hosts Camden in a TVL match at 4 p.m. Friday.

Camden hosted Oneida Monday in a TVL field hockey match that ended in a scoreless tie.

Nya Marsh scored a pair of goals in a 4-1 win for Westmoreland girls soccer Monday at Little Falls in the Center State Conference.

Ava Geglia scored and had an assist for the Bulldogs. Samantha Ferguson also scored. Jacqueline Downs added an assist.

Westmoreland played a non-league game at Poland Tuesday. Results were not available at press time.

Little Falls played at Mount Markham in a non-league game Tuesday. Results were not available at press time.

The Westmoreland-Oriskany boys soccer team lost 2-1 Monday at Hamilton in a non-league match.

The teams were scoreless at the half.

Landson Latella scored and assisted on a goal by Nico Hay for Hamilton.

Jack Tamburino scored an unassisted goal for the Bulldogs.

Cooper Roy had four saves in the win.

Westmoreland-Oriskany fell to 7-2 and will host Little Falls at 4:30 p.m. today in the CSC.

Matthew King stopped all five shots he faced in goal for Clinton in a 3-0 boys soccer win Monday in non-league play.

Henry Schweitzer, Alec Emery and Benjamin Dunikov all scored for the Warriors. Andre Jackson and Joseph Frank collected an assist each.

Alex Prichard had 15 saves for Sauquoit.

Clinton hosts Canastota at 4:30 p.m. today in the Center State.

Sauquoit hosts Frankfort-Schuyler in the league at 4:30 p.m. today.