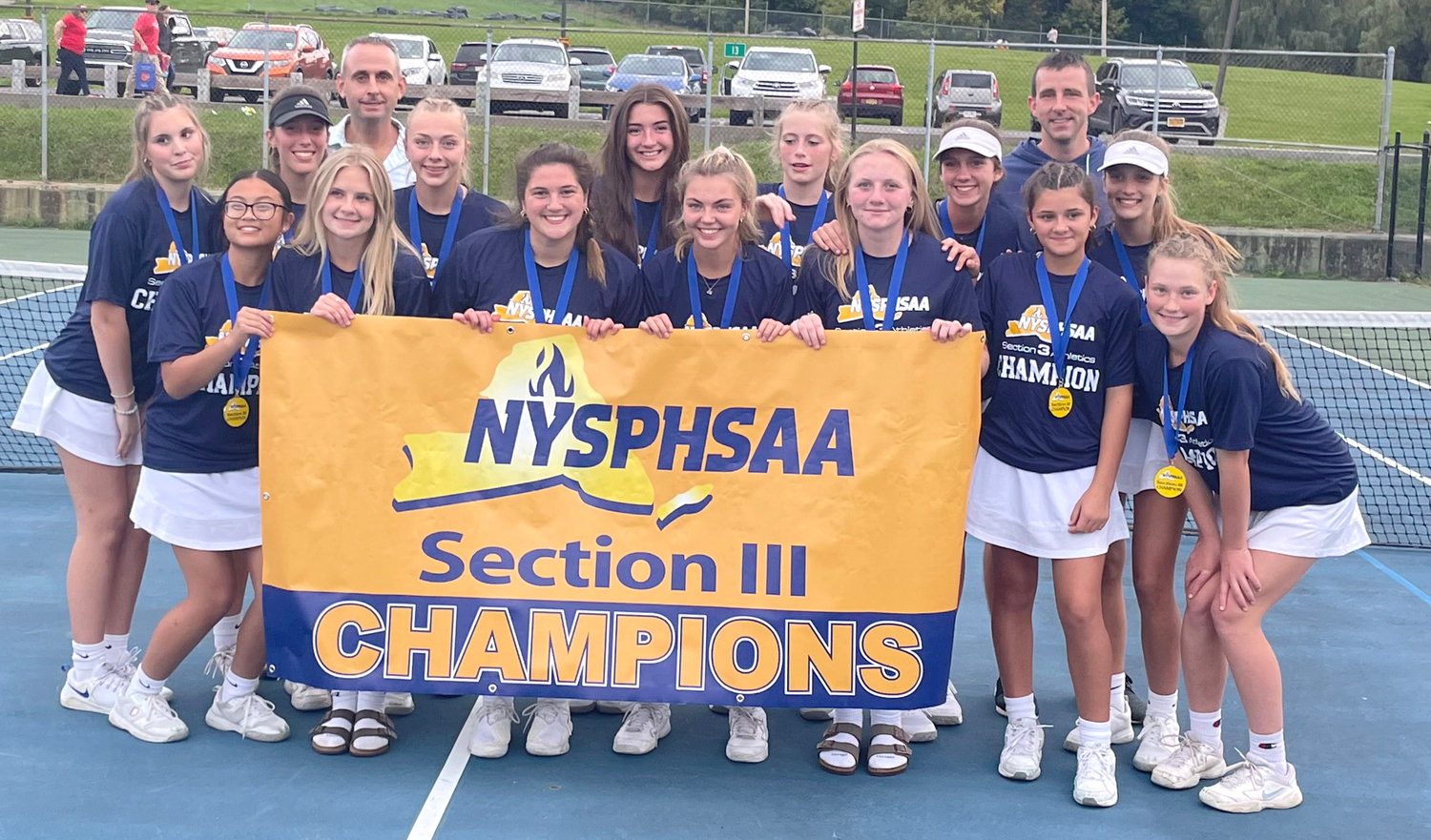 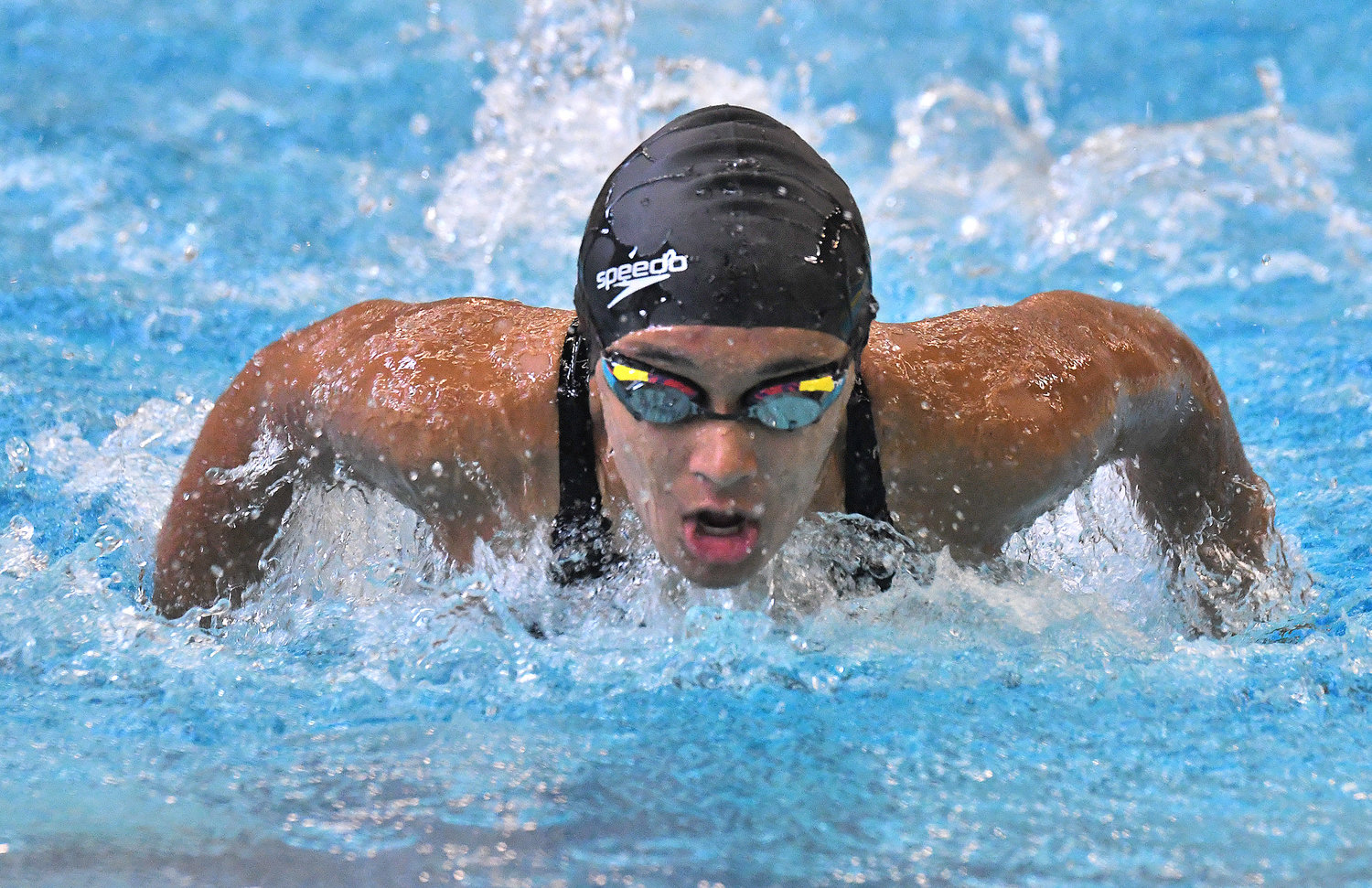 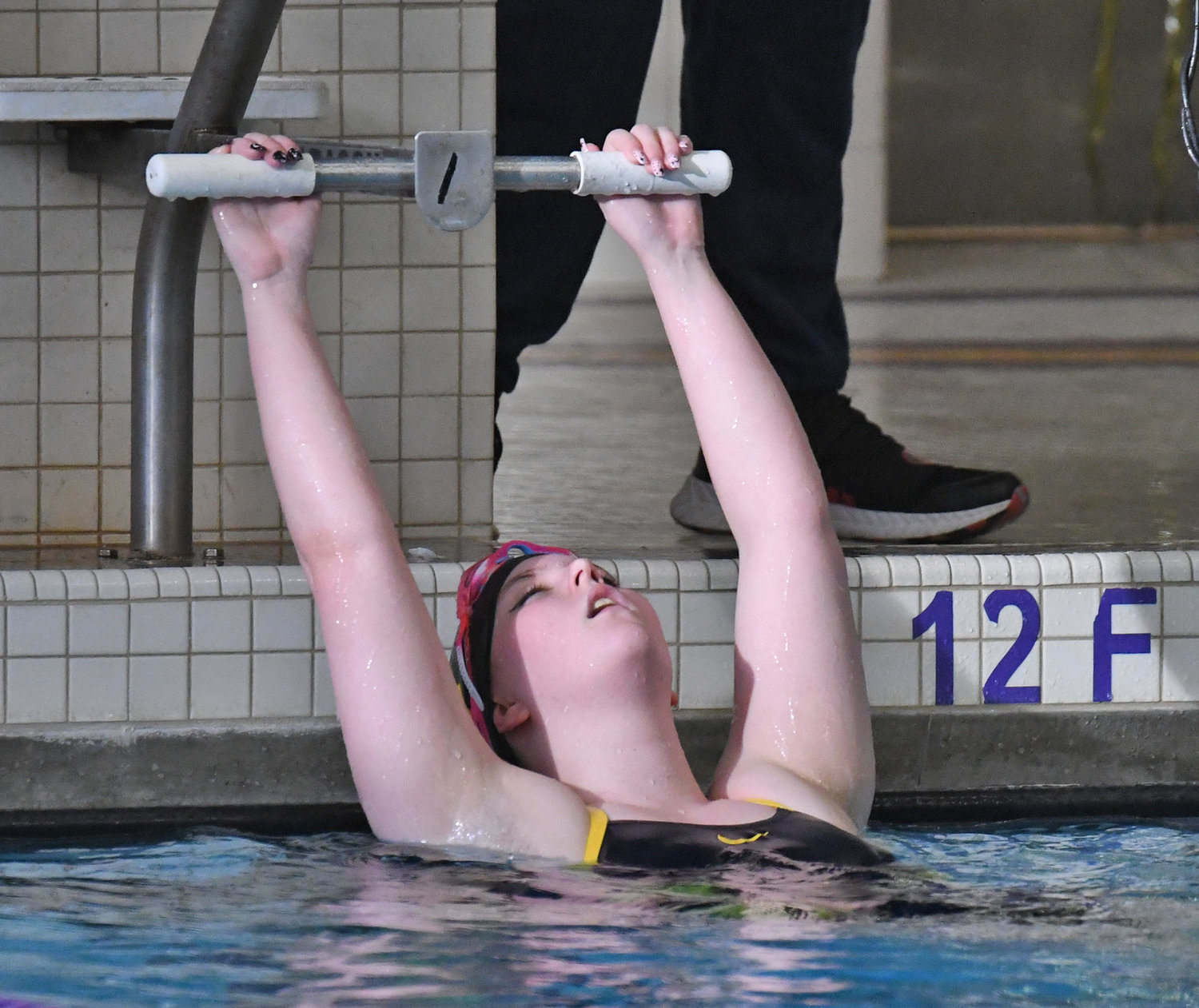 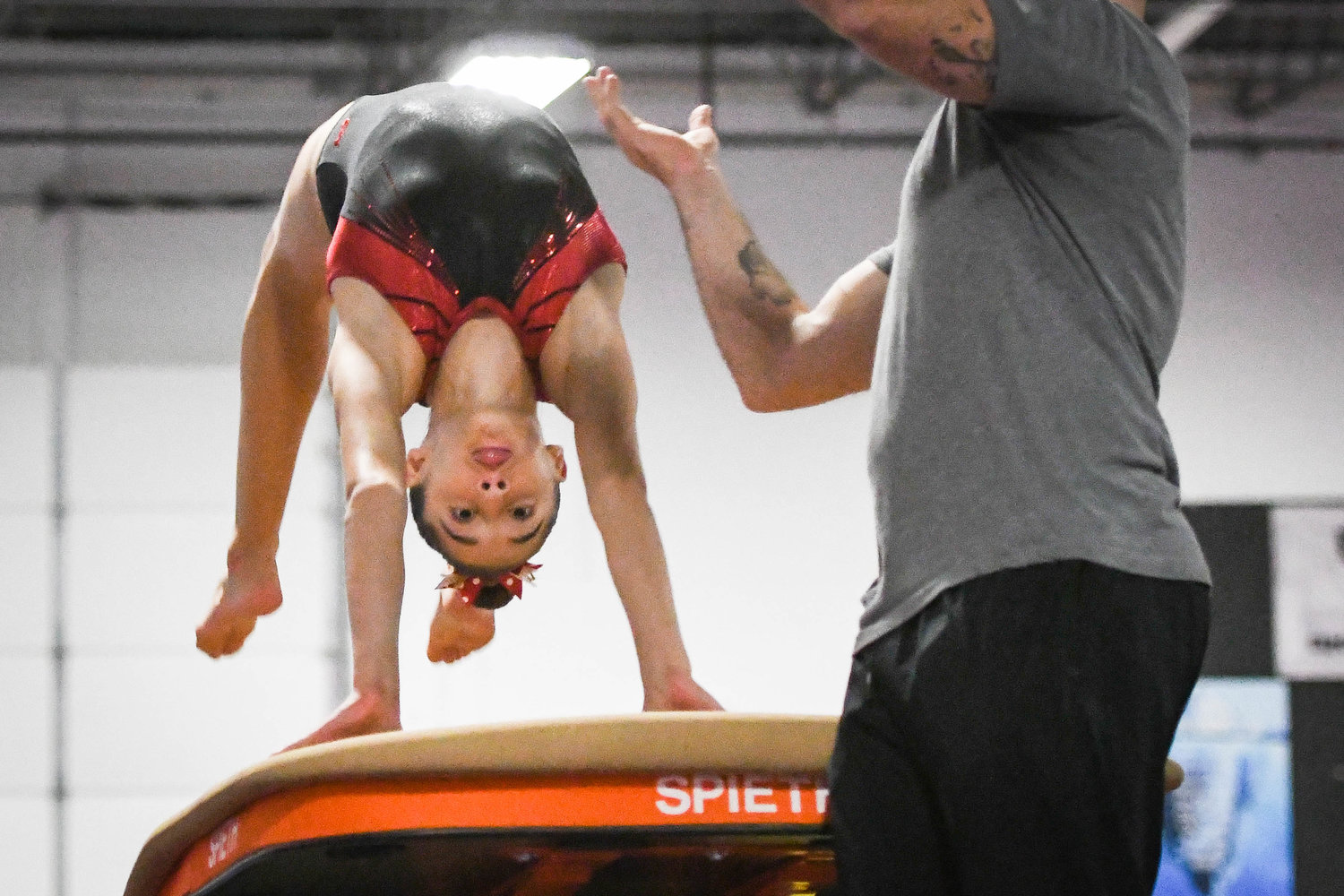 Proctor’s Elianna Curley competes in the vault during a gymnastics competition on Thursday at Valley Gymnastics in Utica. Curley finished third in the floor exercise as Proctor lost to Jamesville-DeWitt/Fayetteville-Manlius 140.5-128.05.
(Sentinel photo by Alex Cooper) 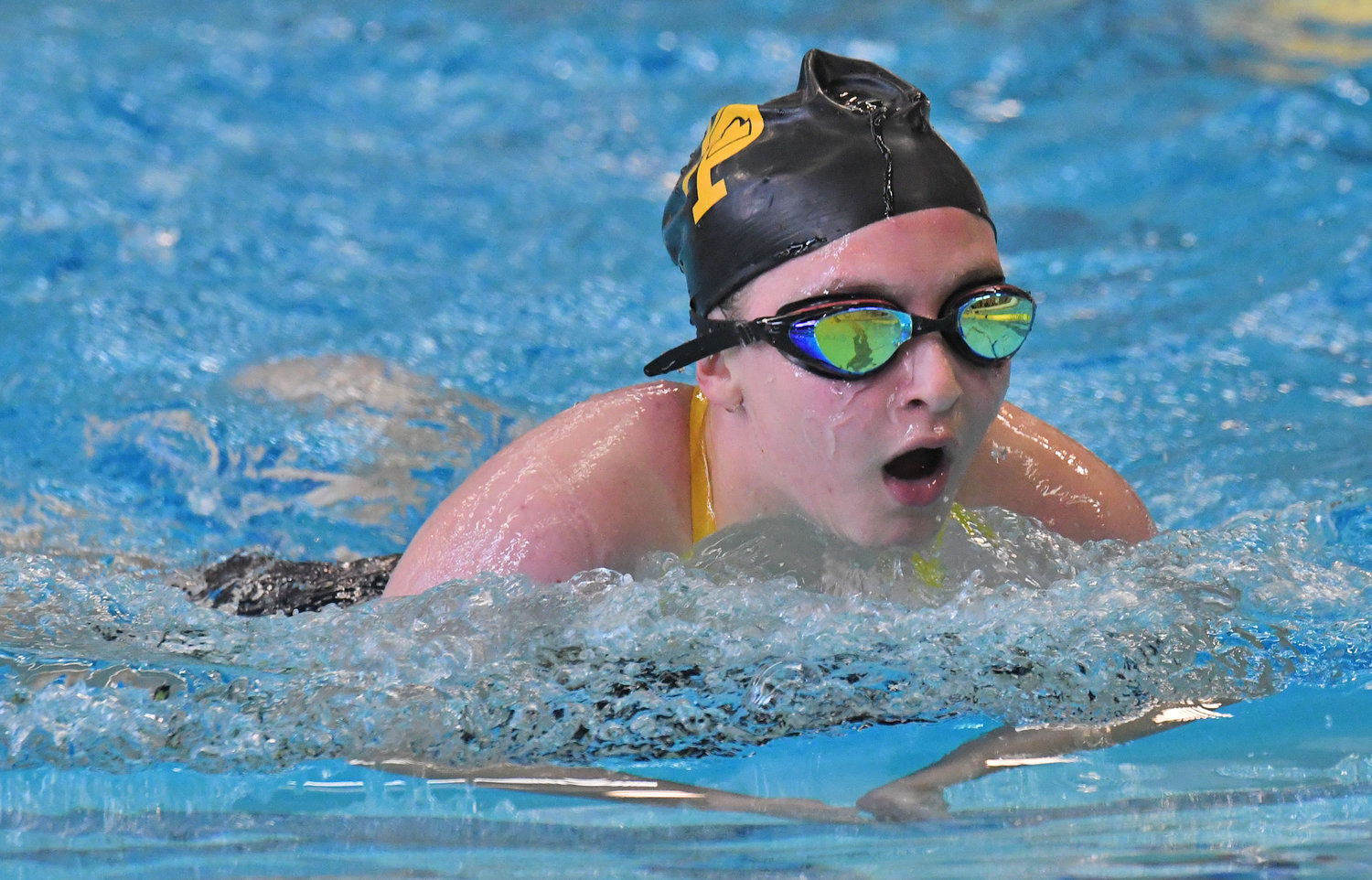 Holland Patent individual medley swimmer Sarah Bangs does the breast stroke in the third leg of the event Thursday afternoon against Rome Free Academy in Holland Patent. Bangs was third in the event.
(Sentinel photo by John Clifford) 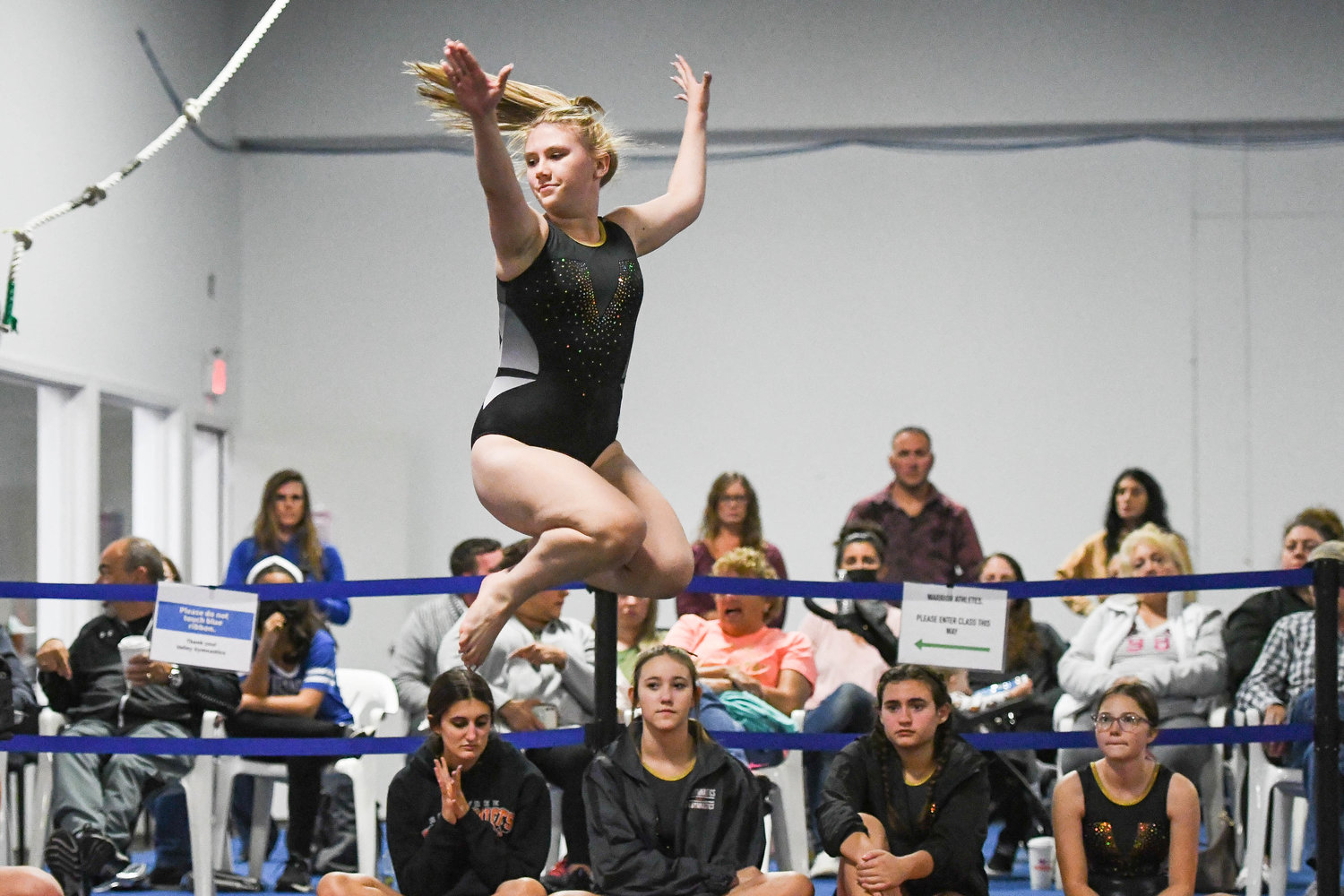 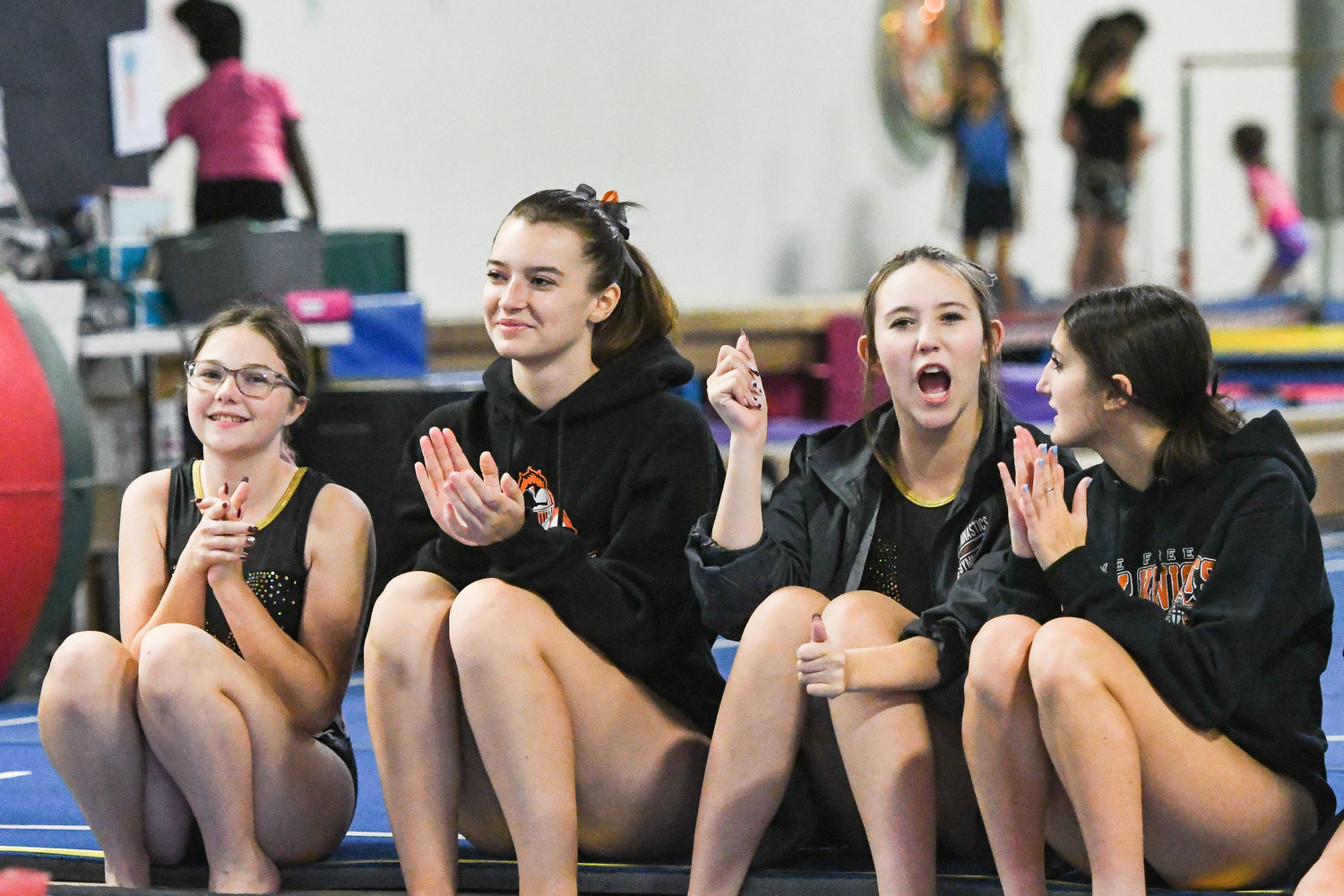 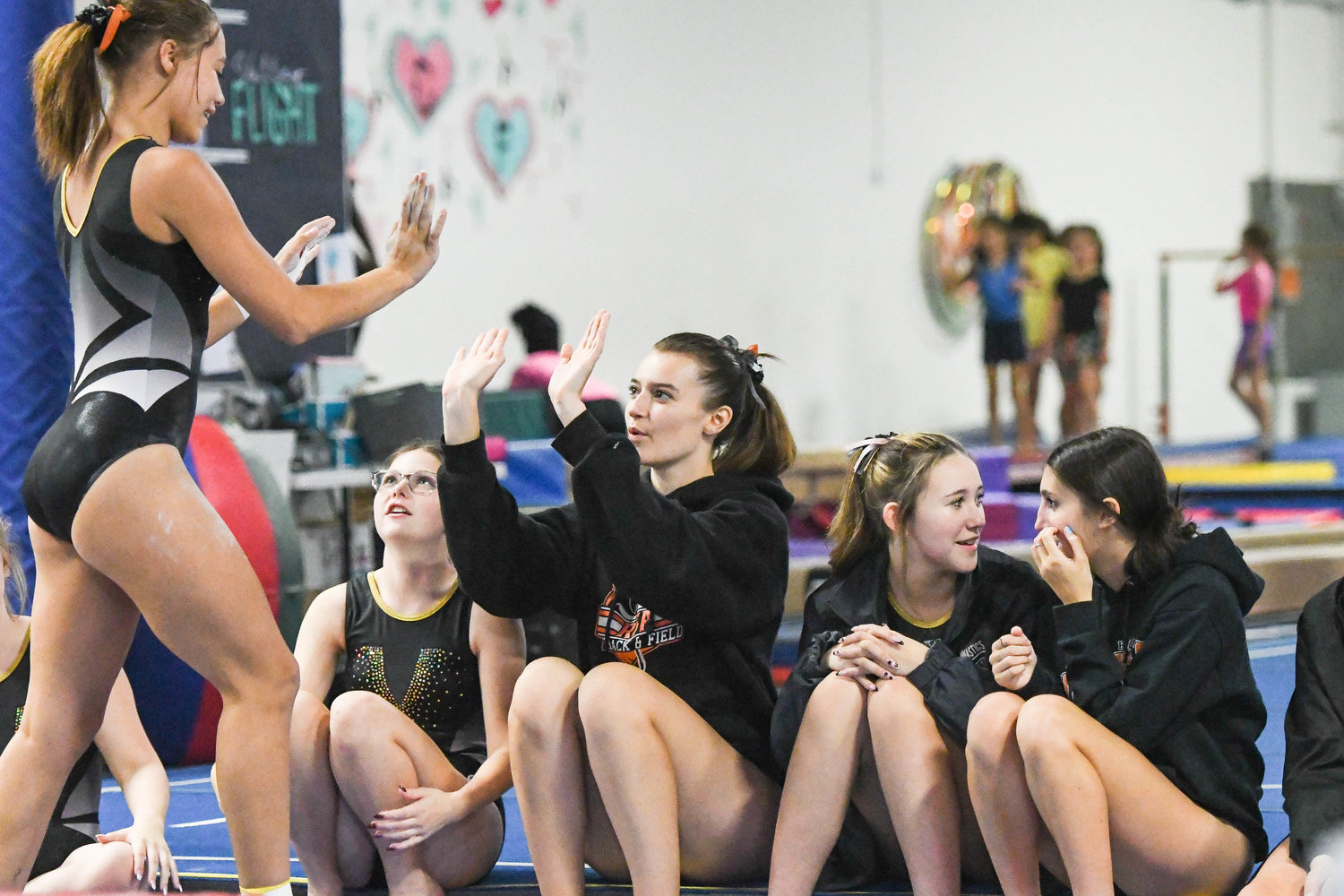 Rome Free Academy girls cheer on a teammate competing in bars during a gymnastics competition on Thursday at Valley Gymnastics in Utica.
(Sentinel photo by Alex Cooper) 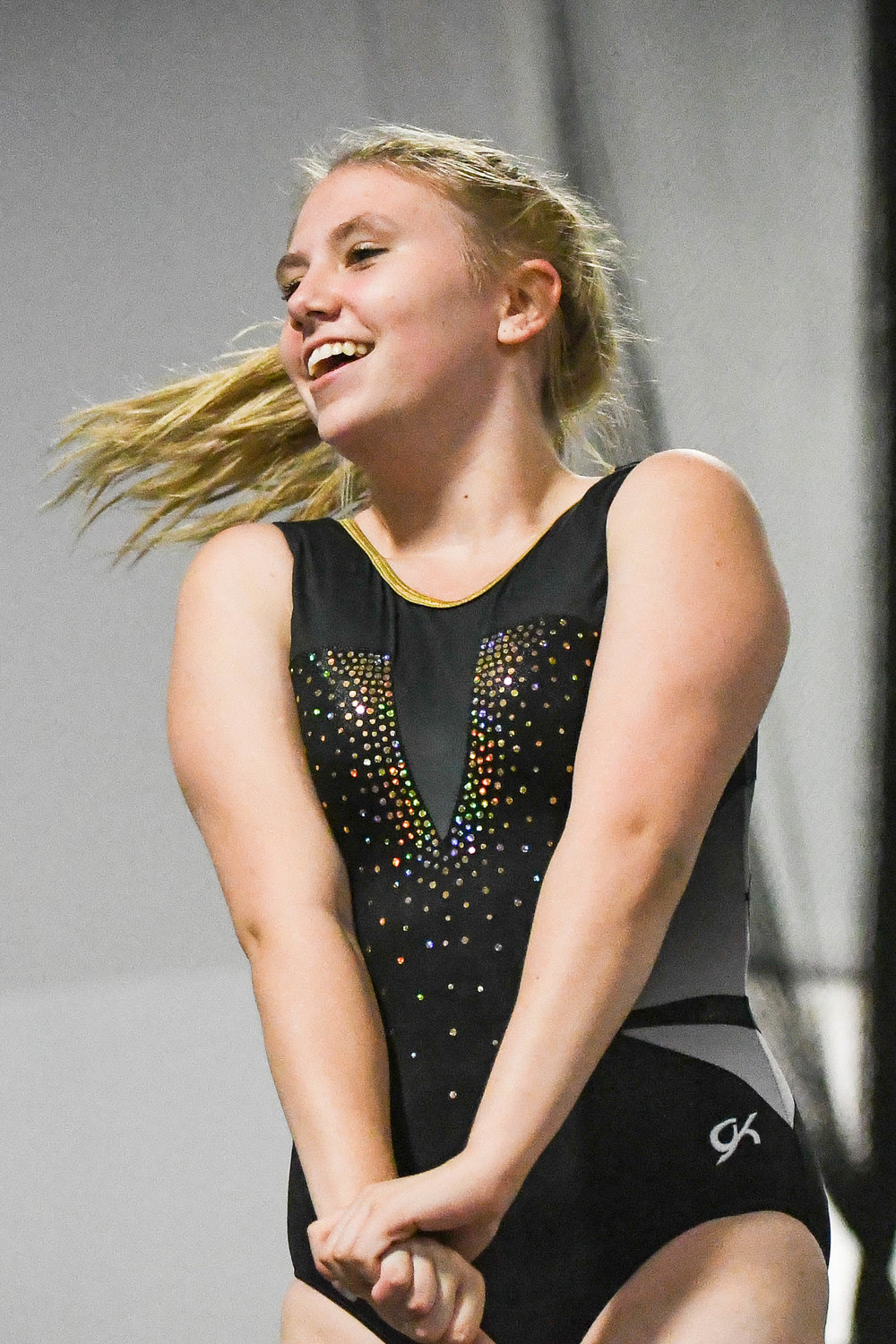 Rome Free Academy's Kyley Kuehnert smiles at her coach before competing in gymnastics on Thursday at Valley Gymnastics in Utica.
(Sentinel photo by Alex Cooper)
Previous Next
Posted Saturday, October 8, 2022 7:30 am

The team also won three of four doubles matches. Winning for Oneida were the pairs of Julianna Caroli and Madelyn Barretta, Kaylee French and Kennedy Curro and Emily French and Claire Vaccaro.

Clinton is now 13-1 and played on the road against non-league opponent New Hartford Friday. Results were not available at press time.

The Little Falls field hockey team got a 1-0 win on the road over Herkimer in the Center State Thursday.

Raegan Stock scored in the first quarter with an assist from Makena Tooley.

Olivia Brand had one save in goal for Little Falls.

Hannah Minguela made four saves in goal for the Magicians.

Herkimer travels to Morrisville-Eaton for a league game at 4:30 p.m. Tuesday.

Mia Mirabelli scored twice for the Rome Free Academy girls soccer team in a 3-1 win at home over Vernon-Verona-Sherrill in the Tri-Valley League Thursday.

In net for RFA, Miranda McCormick stopped a dozen shots.

RFA hosts Whitesboro at 4:30 p.m. on Tuesday in the league.

DeTraglia also earned an assist on one of Luke’s goals.

Deanna Heintz made seven saves in goal to earn the win.

Clinton hosted Canastota Friday in the Center State. Results were not available at press time.

The Herkimer girls soccer team won 5-1 at home over Utica Academy of Science Thursday in the Center State.

Herkimer’s goals were scored by Bunker, Allen, B. Bray, L. Bray and Carney. Marusic, Herringshaw, Allen, H. White and L. Bray each had an assist.

Voorhees made a save in goal for Herkimer to earn the win.

Statistics for UAS were not submitted.

Herkimer plays at Frankfort-Schuyler at 6 p.m. Tuesday in the league.

UAS played at Adirondack Friday in the league. Results were not available at press time.

Anna Rayhill scored a hat trick in the New Hartford girls soccer team’s 6-0 win against Utica-Notre Dame in the TVL at home Thursday.

The win pushes the defending Class A state champs’ unbeaten streak to 50.

In goal for the Spartans, Abby O’Connor made one save.

Vita Waters had 20 saves for the Jugglers.

Notre Dame played a TVL game at Camden Friday. Results were not available at press time.

The Westmoreland/Oriskany boys soccer team beat Adirondack 6-0 Thursday on the road in the Center State.

Jack Tamburino scored twice and assisted on another score. Tyler Szarek had a goal and an assist. Also scoring a goal each were Riley Smith, Nathan Clough and Nick Hays. Anthony Sawanec had a pair of assists and Jesse Sweet had one.

David Cronauer made one save and Hays had two in split time.

Kaiden Bailey made 10 saves and Anthony Noti had three in split time in goal for Adirondack.

Westmoreland-Oriskany is now 11-2 and participates in the Town of Webb Columbus Day Tournament with a 5 p.m. game today against Town of Webb.

Adirondack is 1-10 and hosts Lowville at 6 p.m. today in non-league play.

Jesse Dutcher had a hat trick for Whitesboro in the Warriors’ 8-0 win at home in boys soccer over Camden in the TVL Thursday.

Joshua Gorgas and Mason Burge each had two goals and an assist. Evan Putnam scored and had three assists. Michael Olejarik, Daschel Smith and Matt Mues each had an assist.

Kaidan Fischer made five saves in goal to earn the shutout.

Whitesboro ends its regular season hosting RFA at 4:30 p.m. Tuesday in the league.

The Frankfort-Schuyler boys soccer team won 7-1 at Sherburne-Earlville Thursday in the Center State.

Roman Harrod had two goals. Luke Harrod and Conner Grates had a goal and an assist each. Also scoring were Roman Kulev, Brayden Hall and Brandon Magana. Joseph Mathlin had an assist.

Braydon Matos made one save in goal to earn the win.

Frankfort plays at Herkimer at 6 p.m. Wednesday in the league.