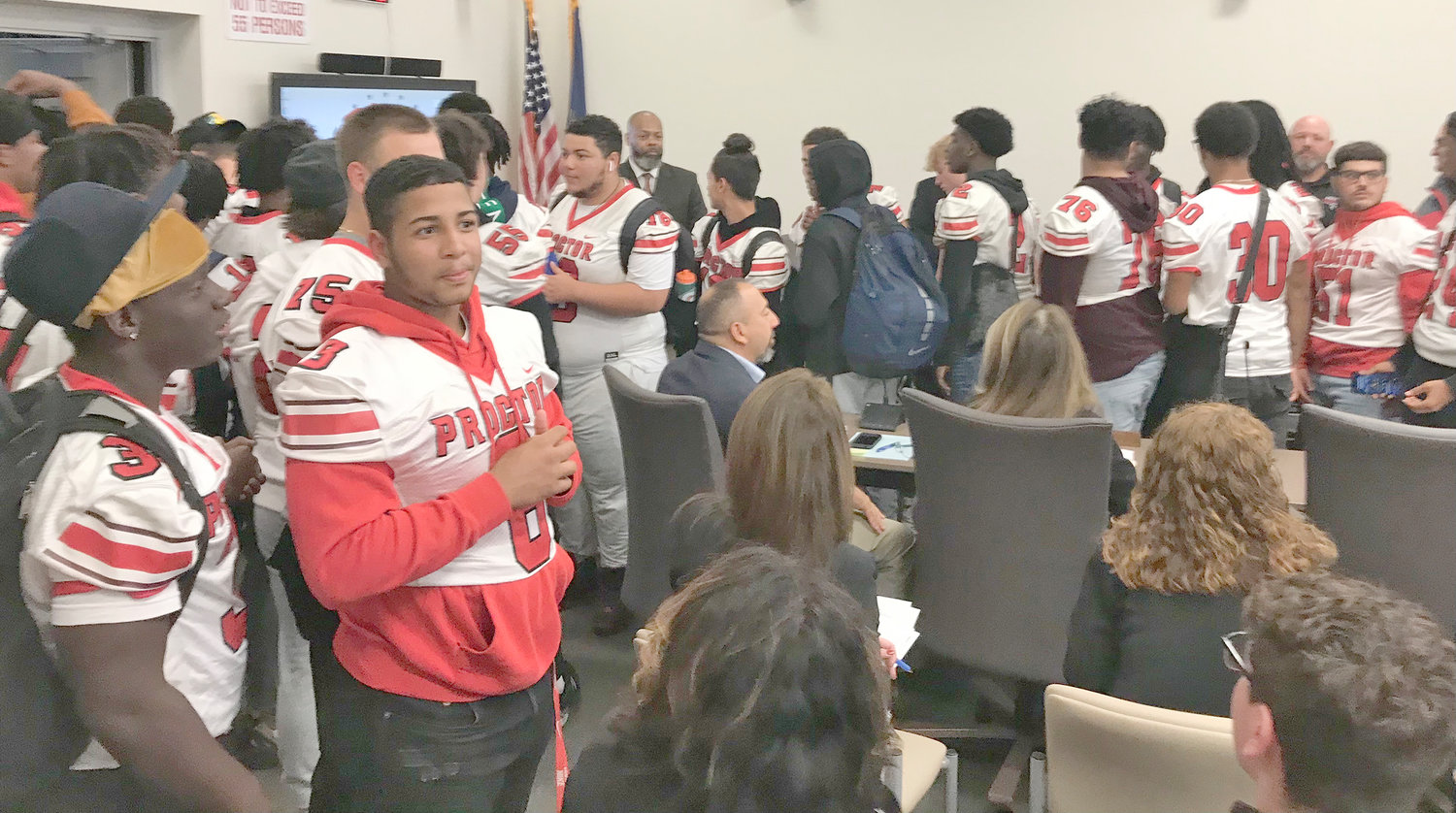 Members of the Thomas R. Proctor football team, along with fellow students from the girls varsity tennis team and the cheerleading squad, visited the Utica City School District Board of Education and their audience Tuesday night at their monthly meeting.
(Sentinel photo by Mike Jaquays)
Posted Thursday, September 29, 2022 7:30 am

The teams were scoreless after halftime. In the second half, Anna Rayhill scored and assisted on the other two goals. Willa Pratt and Erin Cahill also scored. Alex Volo also had an assist.

Savannah Cole stopped all five shots on goal for the shutout.

The Spartans are now 9-0-1 overall and 7-0 in the Tri-Valley League. The team plays at Vernon-Verona-Sherrill at 6 p.m. today in the TVL.

The Rome Free Academy girls soccer team overcame heavy rain for a 5-4 win in overtime over Clinton Tuesday in a non-league match.

RFA took the lead to 4-3 with a penalty kick goal then Clinton scored to tie it up. In overtime, RFA scored a quick goal to win the game.

Miranda McCormick made a dozen saves for RFA.

Ava Alteri scored twice for Clinton. Lydia DeTraglia and Paige Luke each scored and had an assist. Chelsea Lopata also collected an assist.

Deanna Heintz made 23 saves for the Warriors.

Clinton plays at Utica Academy of Science at 4:30 p.m. today in the Center State Conference.

Sofia Sherwood also scored for the Red Devils. Laiken Kiser had an assist.

HP’s Makenzie Stalker scored on an assist from Brianna Mullins.

Isabella Hobin made 13 saves for HP in goal.

VVS hosts New Hartford at 6 p.m. today in the TVL.

HP visits Whitesboro at 6 p.m. today in the league.

Frankfort plays at 4 p.m. Friday at Dolgeville in the Center State.

Adirondack hosts Canastota at 7 tonight in the Center State.

Warriors shut out Oneida then Sauquoit

The Clinton field hockey team shut out Oneida 4-0 Tuesday at home then won 5-0 at Sauquoit Valley Wednesday. Both were non-league games.

On Tuesday, Gretchen Grimm scored twice. Gracen Grimm had a goal and an assist. Elise Pape also scored. Gabriella Gemelli had assists and Lauren Ray earned one as well.

Chloe White made one save in goal for Clinton.

Wednesday, Gracen Grimm got a hat trick and Gretchen Grimm scored once, as did Pape. Rey had four assists and Skyler McFadden had one.

Aubrey Bradbury made six saves and Emily Forbes made nine in split time.

Sauquoit hosts Herkimer at 7 p.m. Friday in the Center State.

Townsend won in 19:58. Her teammates’ finishes were: Julissa Luciano in third, Shannen Calandra in sixth, Gianna Badolato in ninth, Sofia Melone in 12th, Shavaia Parry in 16th and Fiona Carey in 19th.

Grabowski breask her own record again

It was not the only record to fall at the meet. Reina Loiacano, a junior from Whitesboro, beat the West Canada pool record in the 200 individual medley with a time of 2:29:78.

Statistics for Oriskany were not submitted.