The New Hartford boys soccer team got a 6-1 road win over Oneida Tuesday in the Tri-Valley League. ...Plus RFA, VVS soccer and more. 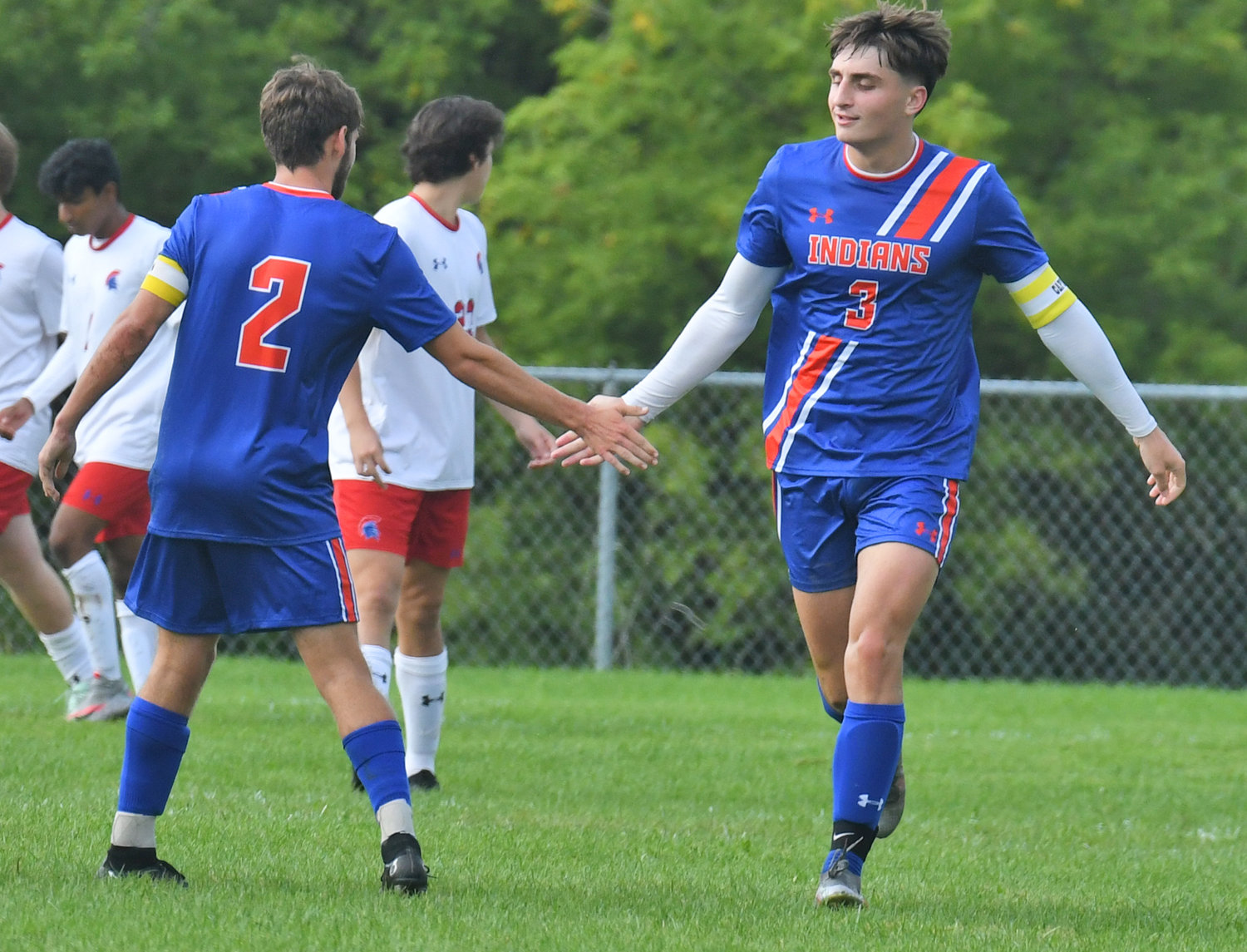 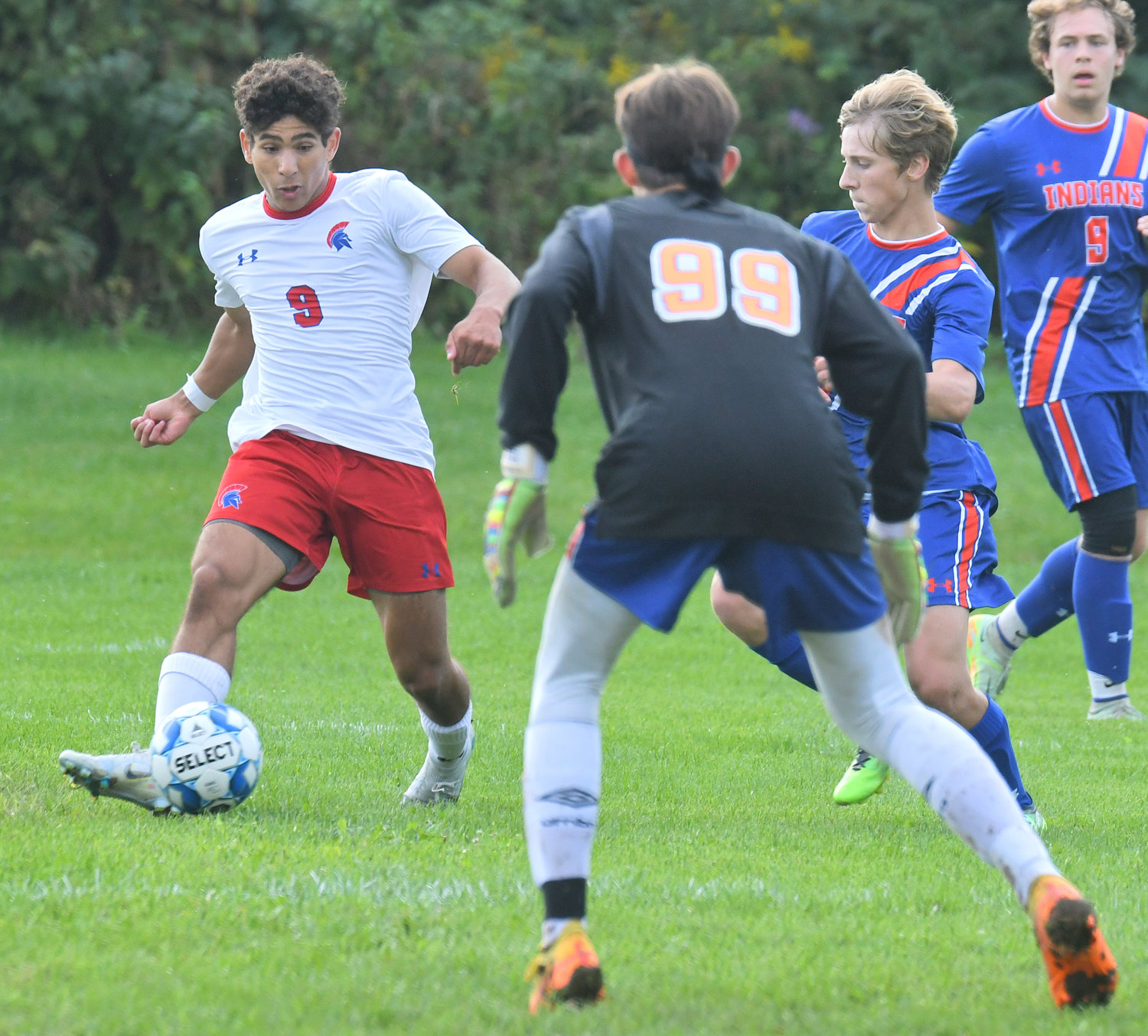 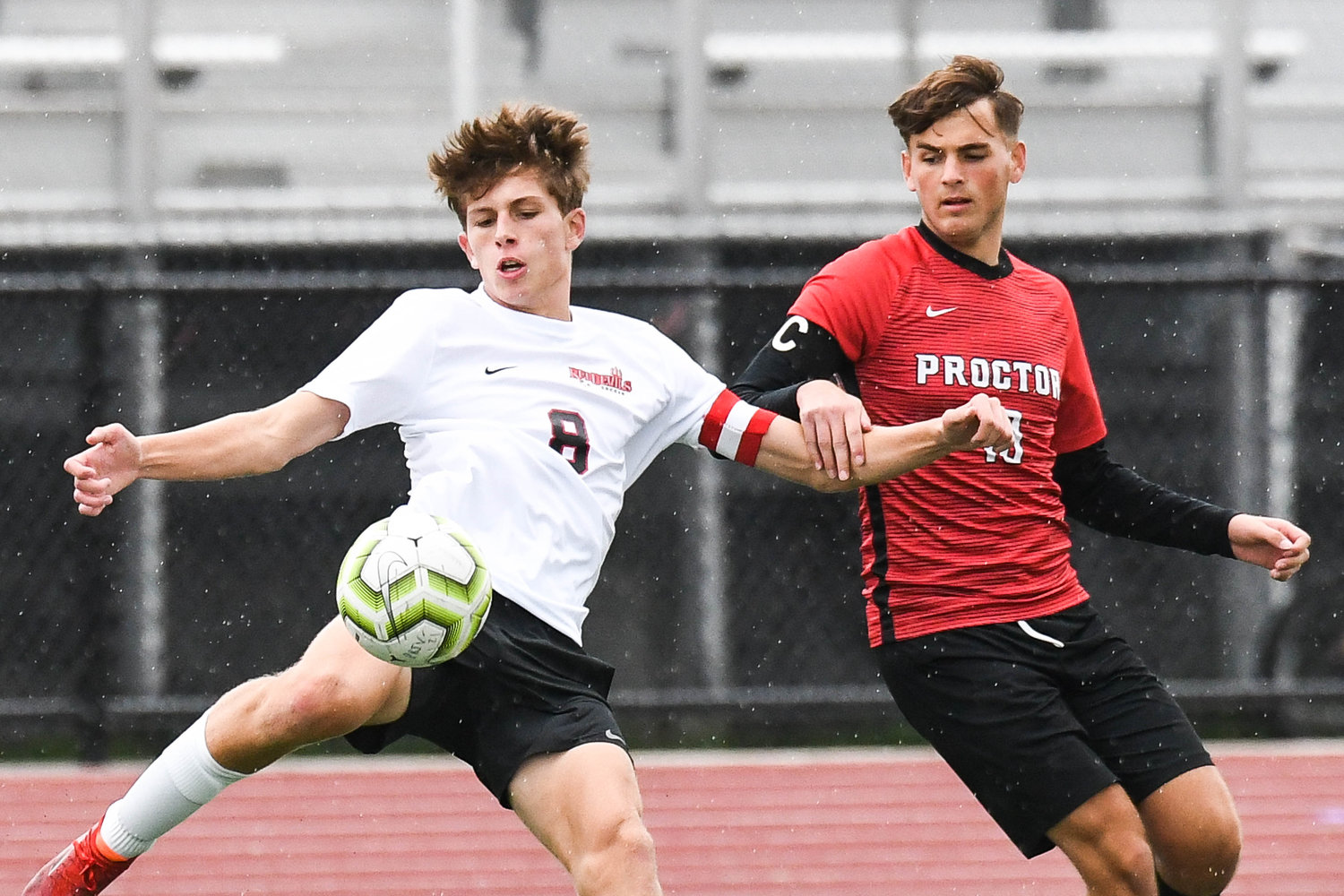 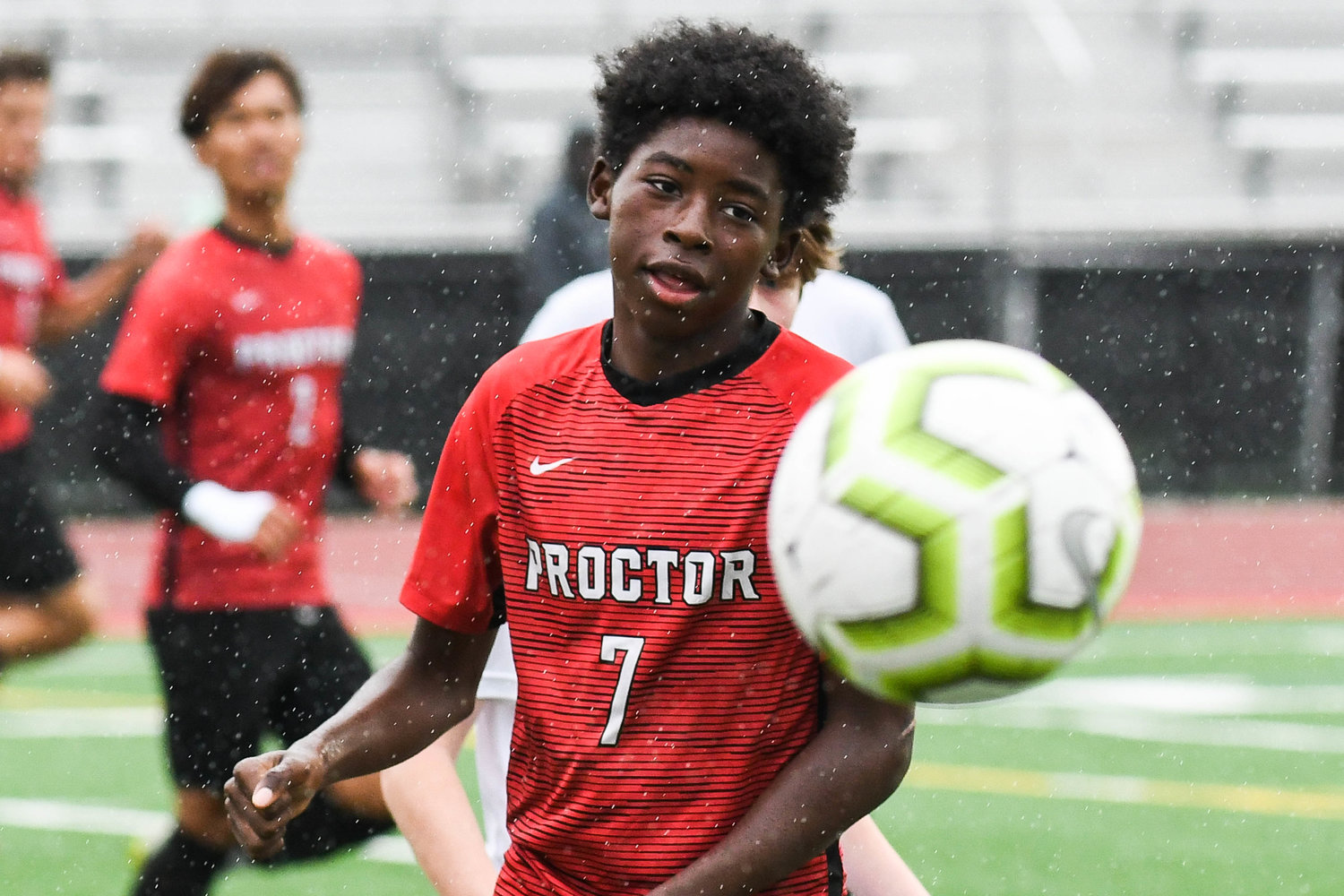 Proctor’s Siidahmed Somow watches as a ball sails out of bounds during the TVL game against Vernon-Verona-Sherrill on Tuesday. He scored a goal and had an assist in the Raiders’ 4-0 win.
(Sentinel photo by Alex Cooper) 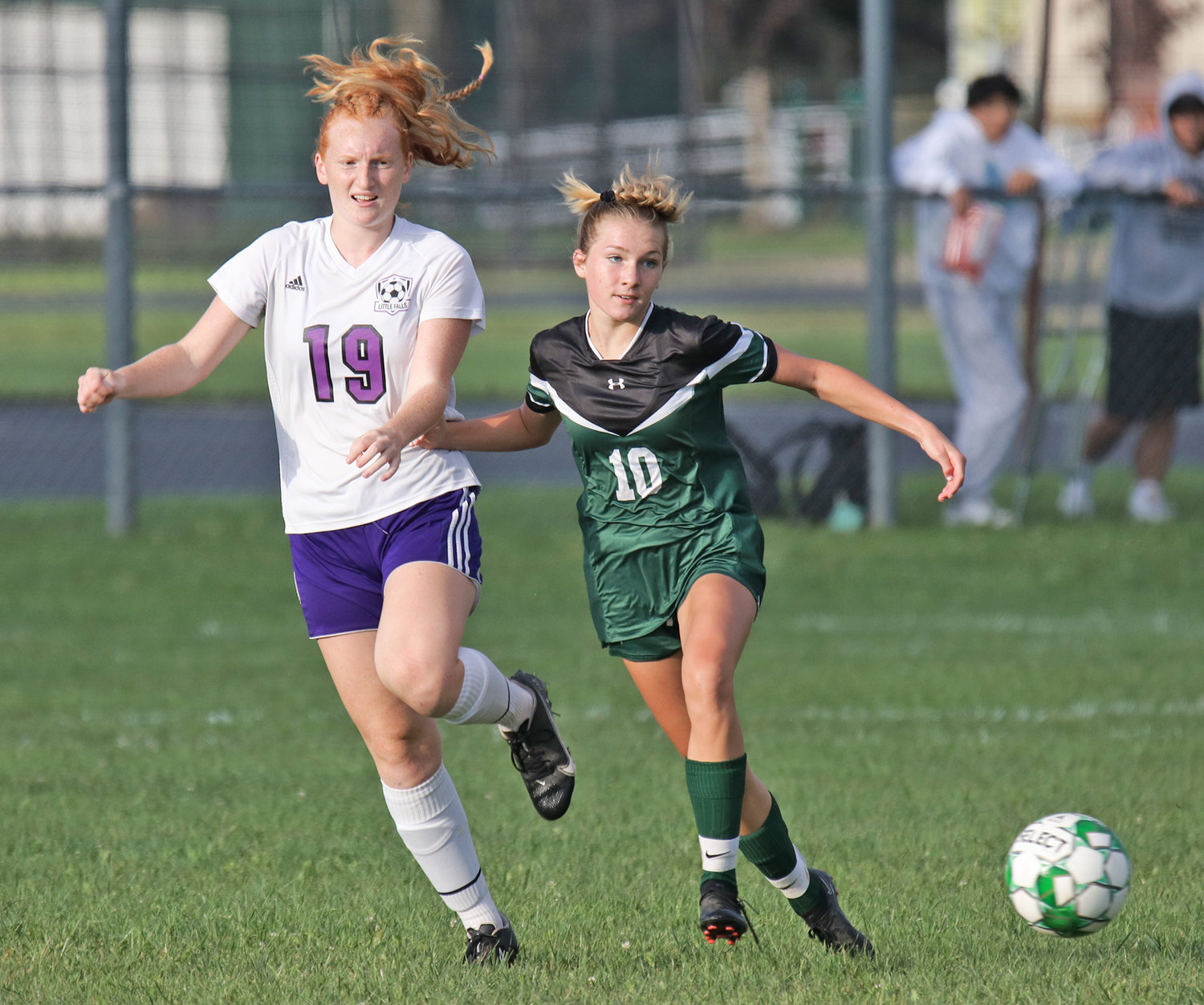 Victoria Downs of Westmoreland, right, creates some space with Little Falls' Alexis Kress in the game Tuesday. Downs had a pair of assists in the Bulldogs' 7-1 win at home in the Center State Conference.
(Photo courtesy of Gary Dillon) 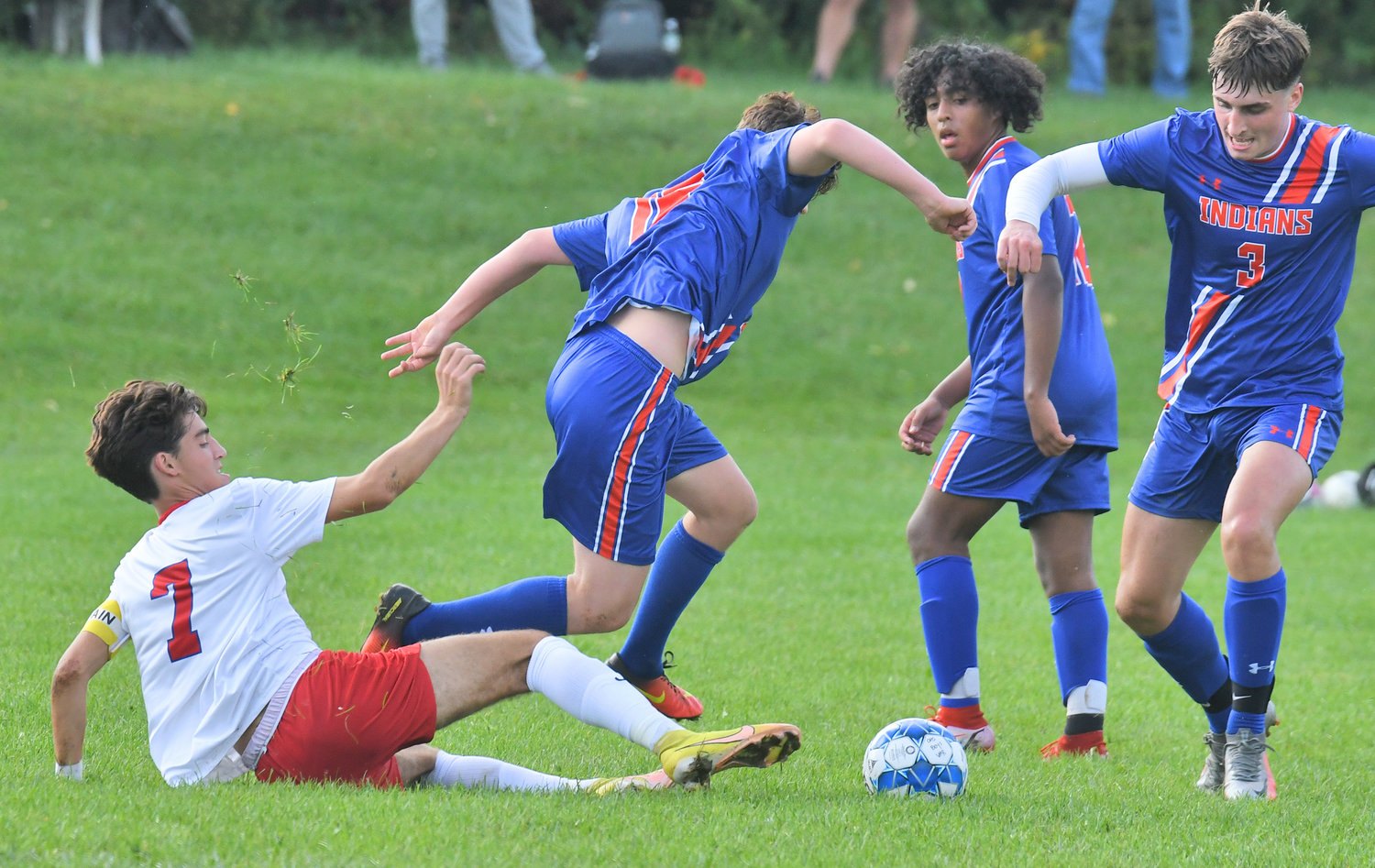 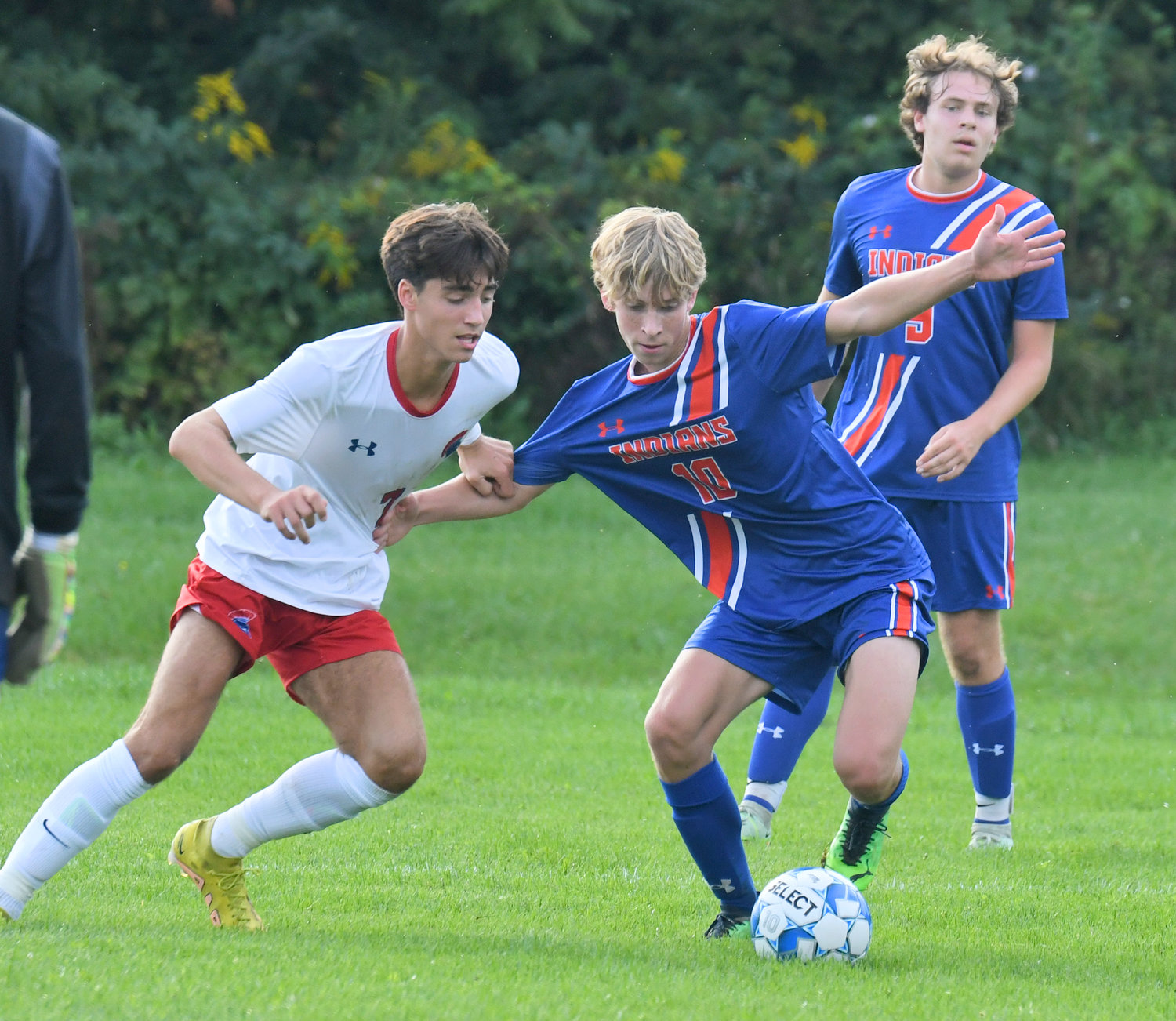 New Hartford's Ashton Giambrone and Oneida's Cash Kistner spar for the ball during the first half in Oneida on Tuesday afternoon.
(Sentinel photo by John Clifford) 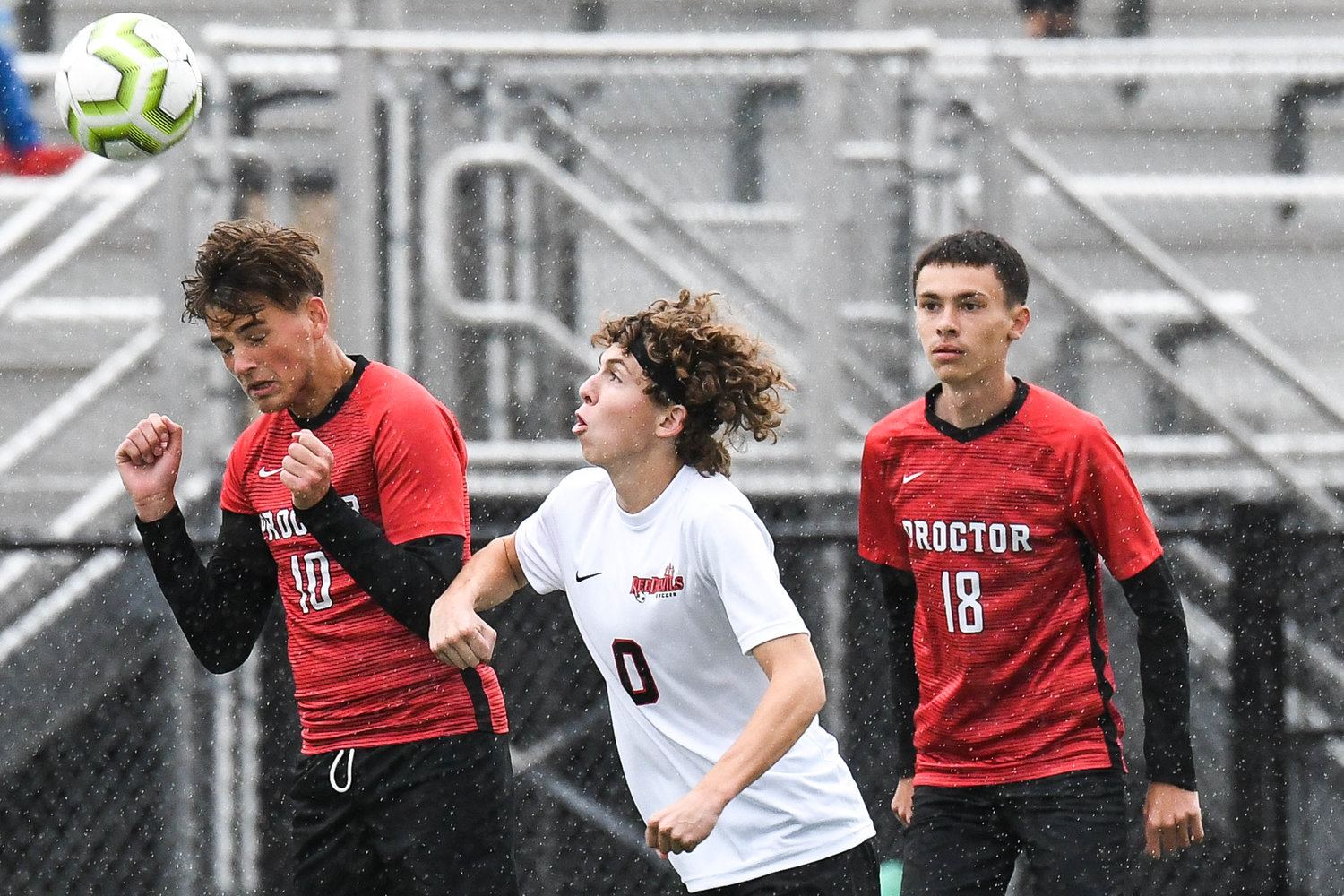 Proctor player Ervin Ruznic (10) heads the ball as a VVS player defends during the soccer game on Tuesday.
(Sentinel photo by Alex Cooper) 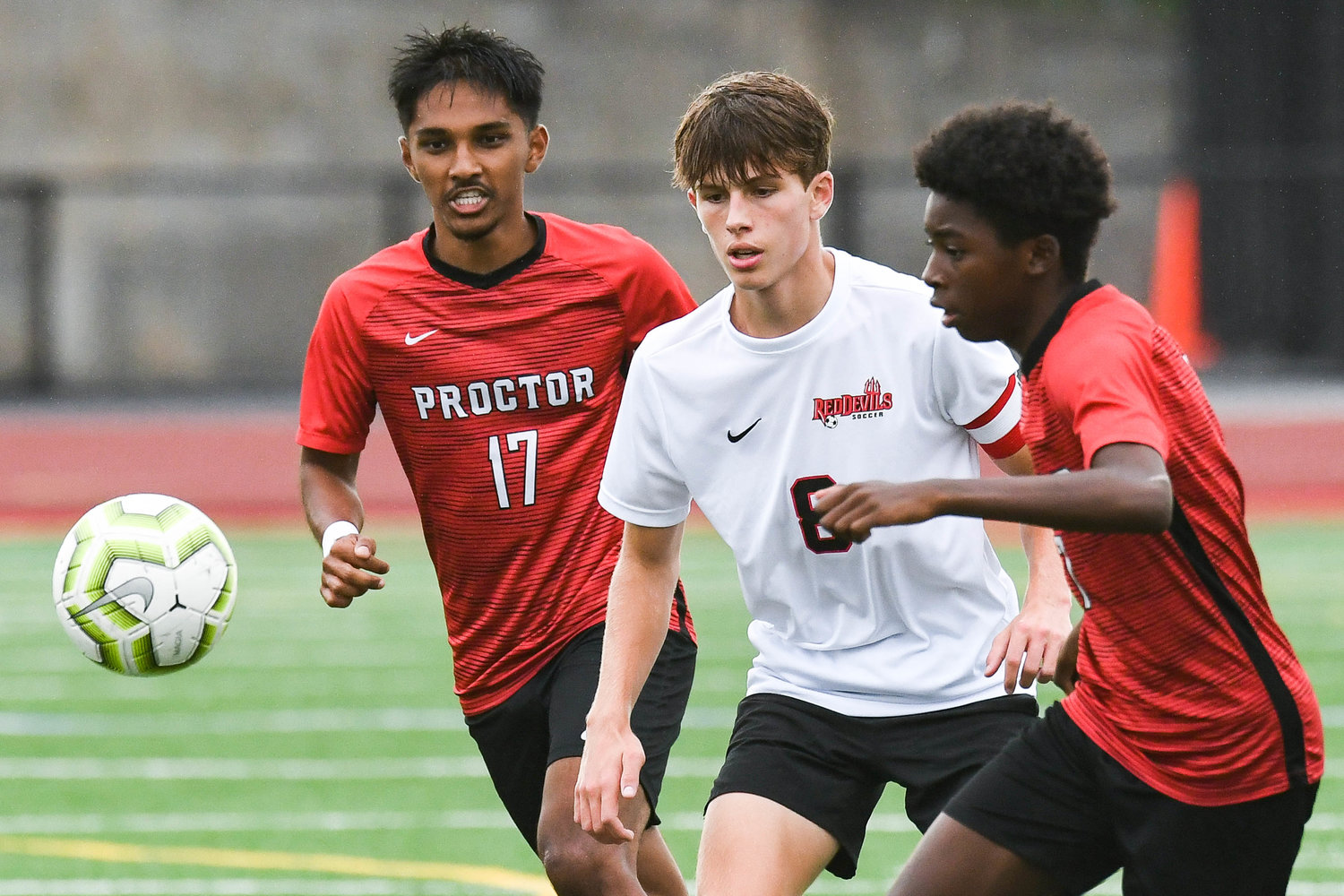 Proctor player La Eh Soe reacts after missing a shot on goal during the soccer game against VVS on Tuesday.
(Sentinel photo by Alex Cooper) 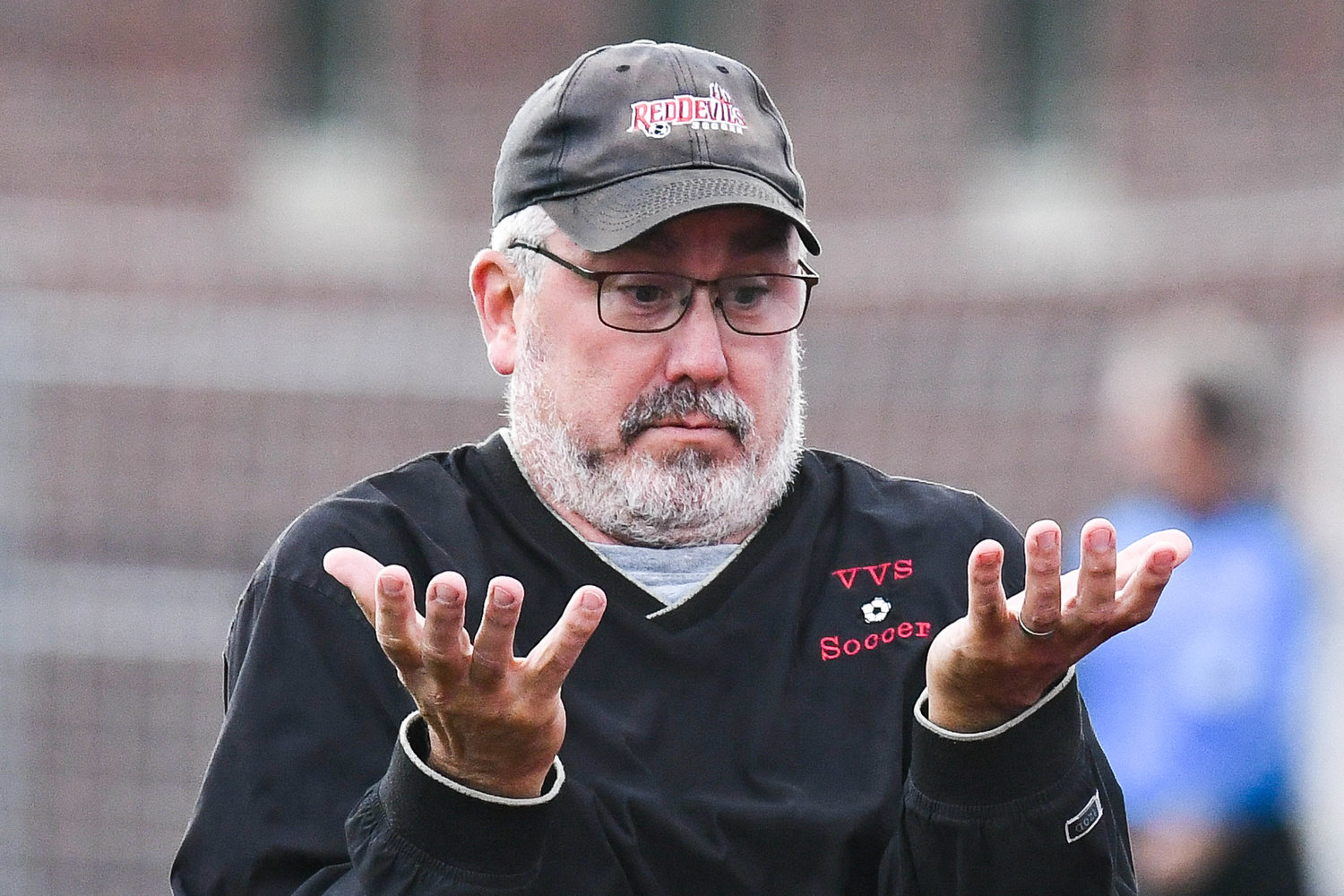 VVS head coach Frank Mitchell reacts on the sidelines during the soccer game against Proctor on Tuesday.
(Sentinel photo by Alex Cooper) 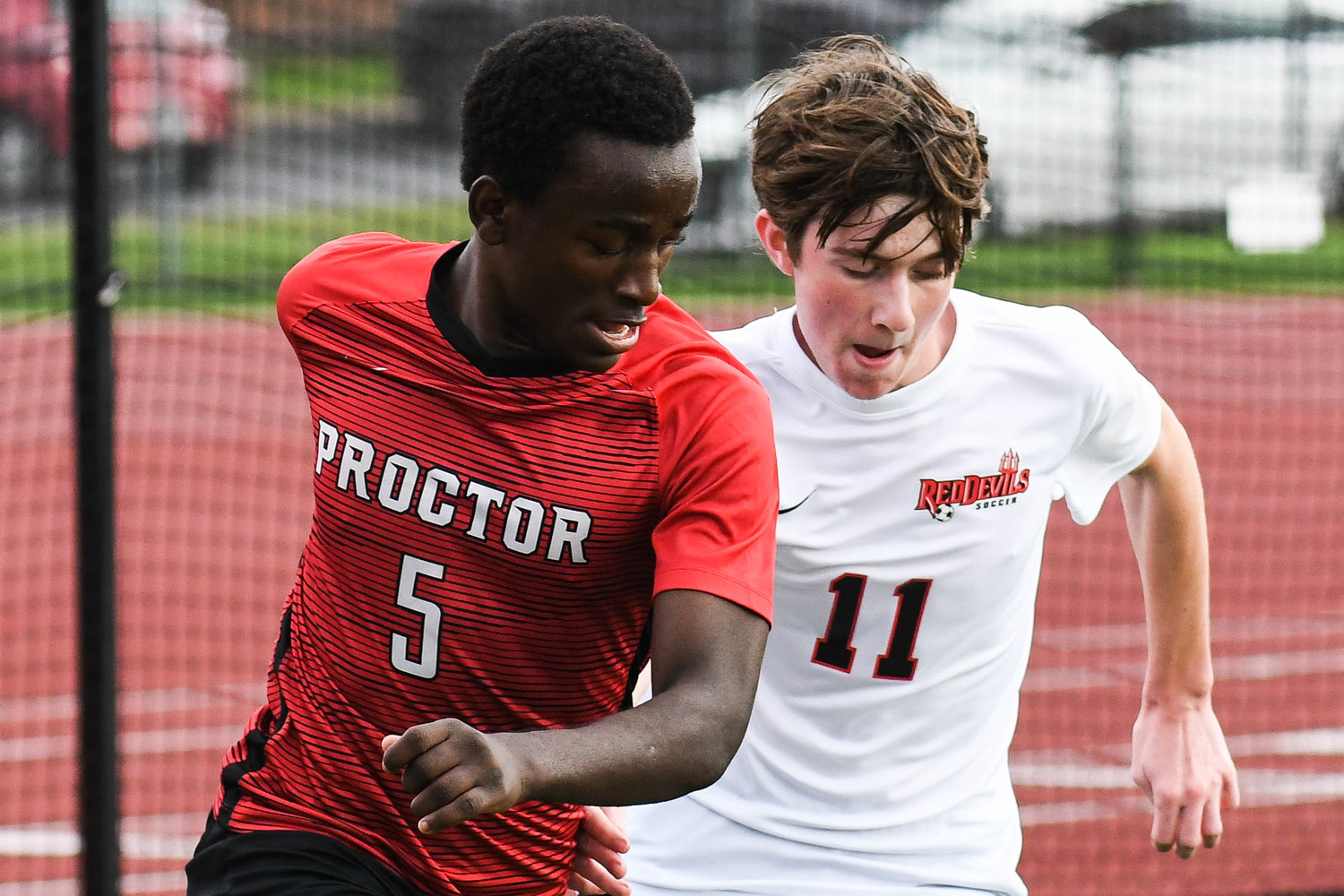 The New Hartford boys soccer team got a 6-1 road win over Oneida Tuesday in the Tri-Valley League.

Andrew Hicks scored Oneida’s only goal on an assist from Ryan Hughes.

Oneida plays at Rome Free Academy at 1:30 p.m. Saturday in the league.

The Raiders scored once in the first half and added three goals in the second half.

Nidal Ramic stopped all five shots he faced to earn the shutout.

Siidahmed Somow scored a goal and had an assist. Also scoring were Hussein Awo, Adelin Buljubasic and Ervin Ruznic. Amir Halilovic and Alan Catic had an assist each.

Logan Fisher made 14 saves for VVS.

Proctor improves to 3-0 in the league and 5-1 overall. The team plays at New Hartford at 6 p.m. Thursday in the league.

Sam Ferguson’s four-goal performance for the Westmoreland girls soccer team helped the Bulldogs to a 7-1 home win over Little Falls Tuesday in the Center State Conference.

Emily Gubbins made three saves in goal for Westmoreland.

Westmoreland improves to 3-1 and will host Herkimer at 4:30 p.m. Thursday in the league.

Little Falls, 0-3, plays at 7 p.m. Thursday at Frankfort-Schuyler in the league.

The Rome Free Academy girls soccer team held Camden off the scoreboard in a 4-0 win at home Tuesday in the TVL.

Miranda McCormick stopped both shots on goal that she faced in the game for RFA.

RFA plays a road game in the TVL at Whitesboro at 4:30 p.m. Thursday.

Camden plays at Vernon-Verona-Sherrill at 6:30 p.m. Thursday in the league.

Laiken Kiser and Julia Carter scored three goals apiece in a 10-0 win for Vernon-Verona-Sherrill at home over Utica Proctor in girls soccer Tuesday in the TVL.

Kiser also added a pair of assists. Anna Petersen had two goals and an assist. Ella Cenname and Eva Croft also scored a goal each. Sofia Sherwood had two assists.

Statistics for Proctor were not submitted.

Proctor hosts New Hartford at 4:30 p.m. Thursday in the league.

The Clinton girls soccer team cruised to a 9-0 win at home over Utica Academy of Science Tuesday in the CSC.

Paige Luke scored twice and had an assist. Also scoring two goals was Ellie Thompson. Lydia DeTraglia and Ava Alteri had a goal and an assist each. Chelsea Lopata, Abby Hemstrought and Taylor Maxam each scored a goal. Elvedina Korkutovic had an assist for the Warriors.

In net for Clinton, Deanna Heintz stopped all four shots she faced.

Clinton plays at Marcellus in a non-league game at 7 p.m. Thursday.

Utica hosts Canastota at 1 p.m. Saturday in the league.

The New Hartford girls soccer team won 8-0 at home against TVL opponent Oneida, with seven players scoring at least once.

The win extends the team’s unbeaten streak to 42 games.

The Spartans led 3-0 at the break.

In goal for the Spartans, Abby O’Connor had one save.

Statistics for Oneida were not submitted.

The Sauquoit Valley girls soccer team had 10 players score at least one goal each in Tuesday’s 13-0 win at Waterville in the CSC.

Olivia Kalil scored twice and had an assist. Also scoring twice each were Emma Yerman and Addison Lazarek. Paige Kuhn, Kirsten Shepard, Celena Sperbeck and Tristyn Williams each had a goal and an assist. Kaitlyn Corr and Kamryn Yerman also scored. Kayla Salvatore and Allison Crandall had an assist each.

Jadyn Land stopped four shots on goal for Sauquoit for the shutout.

Sauquoit plays a CSC game at Cooperstown at 4:30 p.m. Thursday.

Waterville plays at 6 p.m. Monday at Mount Markham in the league.