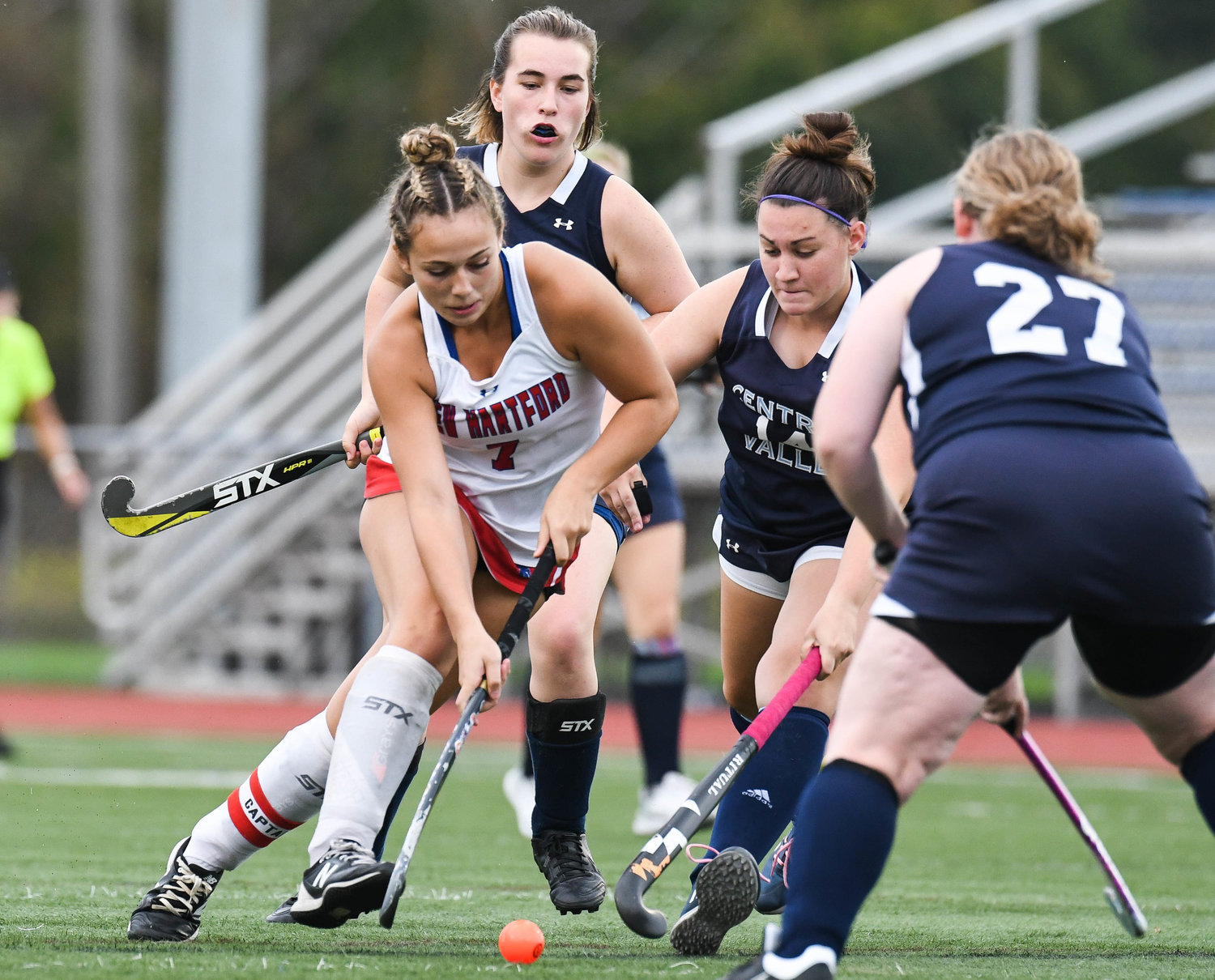 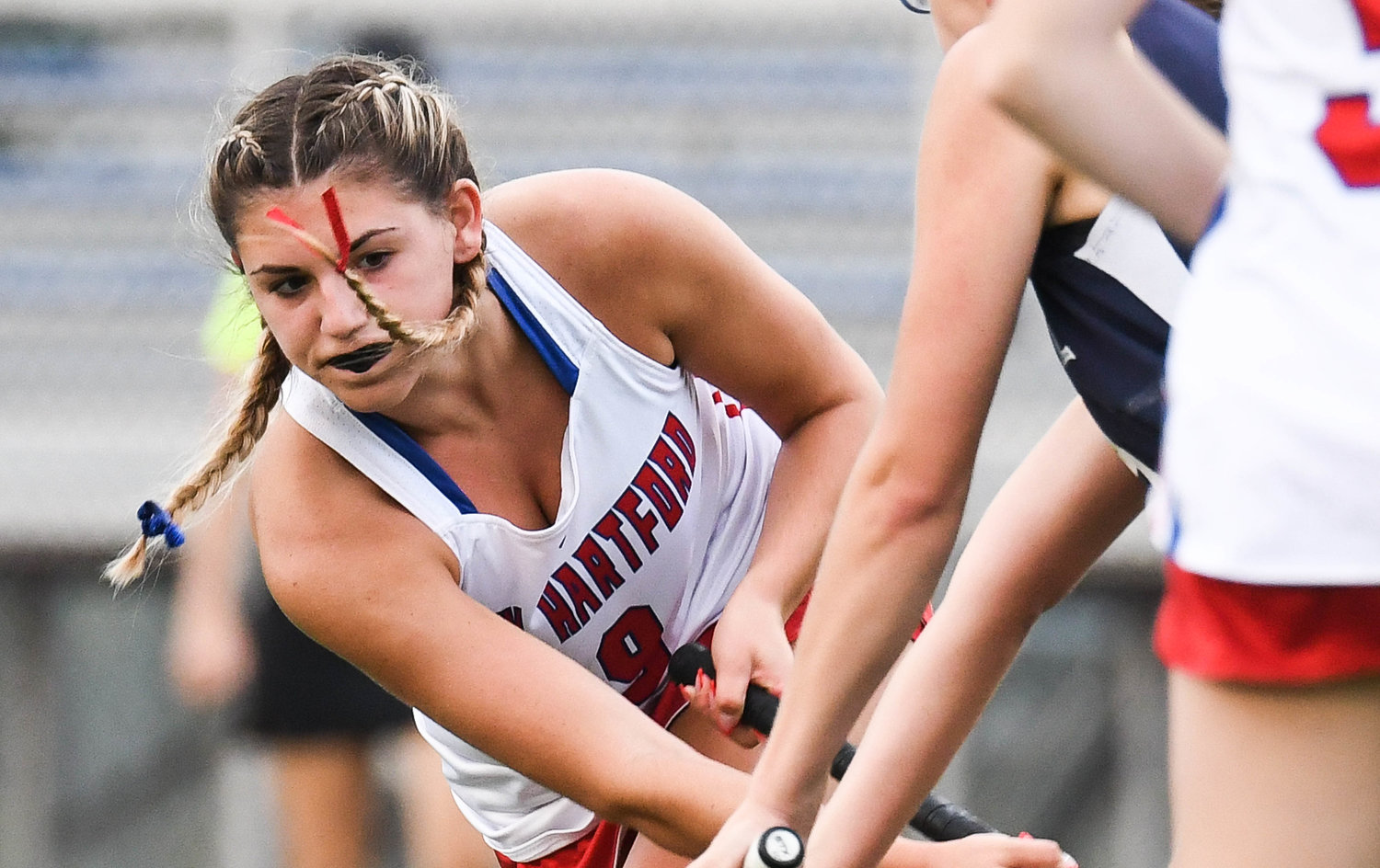 New Hartford player Grace McNamara fires a shot toward the net during the field hockey game against Central Valley Academy on Wednesday. McNamara had an assist as the Spartans won 3-0.
(Sentinel photo by Alex Cooper) 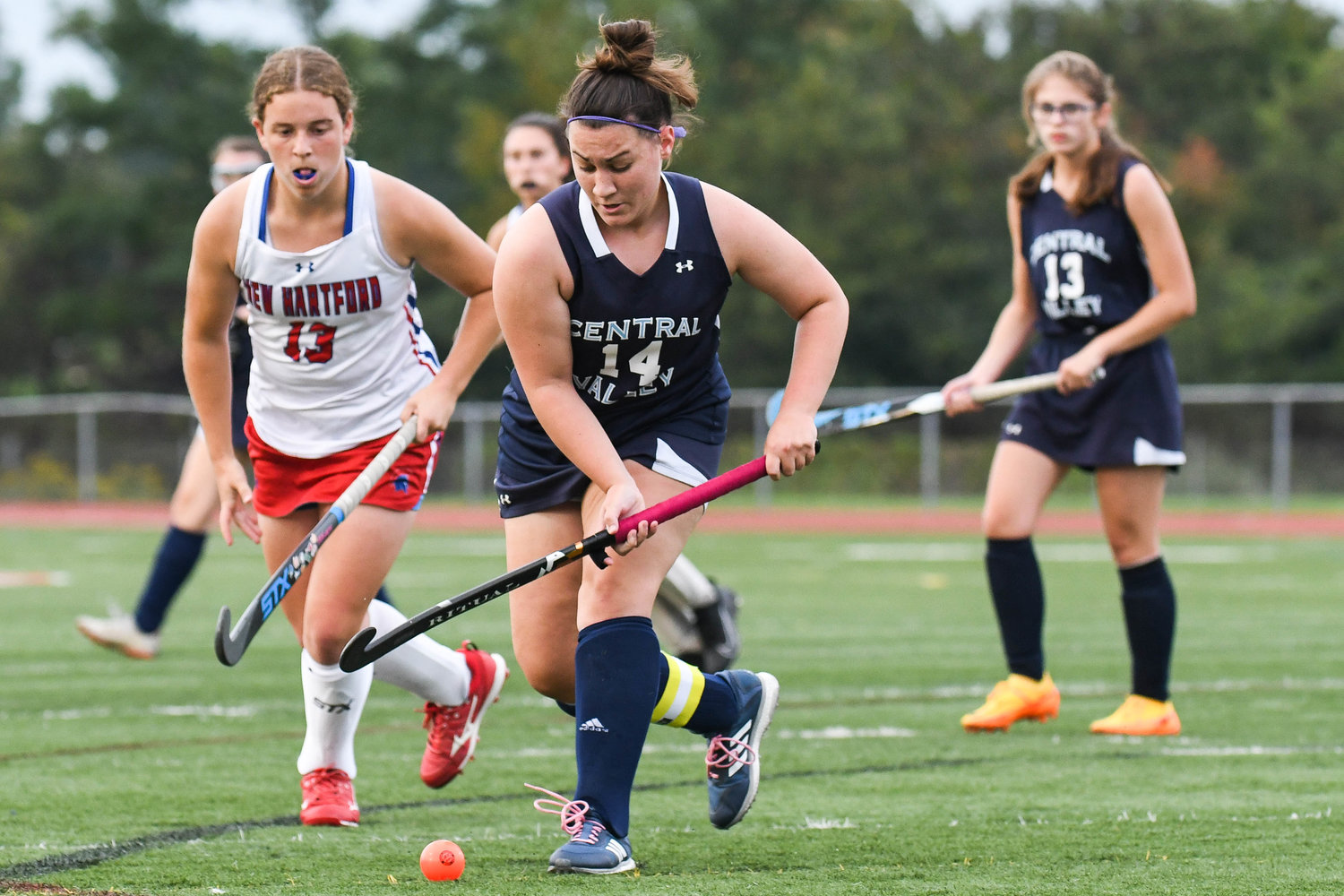 Sienna Holmes had a goal and Grace McNamara added an assist.

Emilee Clarey stopped all four shots on goal for the Spartans.

Morgan Russo made 27 saves for CVA.

CVA hosts Camden at 11 a.m. Saturday in the TVL.

The Vernon-Verona-Sherrill field hockey team posted a 7-0 home victory over Oneida in the TVL Wednesday.

Devyn Balfe stopped all three shots she faced for VVS.

Bethany Honness had 11 saves for Oneida.

Nardslico has a big game in RFA win

The Rome Free Academy field hockey team won 8-1 at Whitesboro in the TVL Wednesday. Alyssa Nardslico scored and had three assists for the Black Knights.

Isibeal McMahon and Cara Mecca both had two-goal efforts. Also adding a goal each were Drew and Dani Kopek and Gracie Paccica. Alexa Thompson and Fiona McMahon earned an assist each.

Antonia DiCesare scored for Whitesboro on an assist for Haley Cornine.

Isabella Irizarry had nine saves in goal for the Warriors.

Whitesboro plays at 7 p.m. Monday at New Hartford in the league.

Alivia Rizzo scored twice in a 2-1 win for the Oriskany girls soccer team Wednesday on the road against Town of Webb in the Center State Conference.

Addison Fabbio had an assist for Oriskany.

Kaylee Burnop made 12 saves in the win.

Oriskany hosts Frankfort-Schuyler at 4:15 p.m. today in a non-league match.

Samantha Ferguson’s two goals were the margin of victory as the Westmoreland girls soccer team got a 3-1 road win against Dolgeville Wednesday in the Center State.

Victoria Downs also scored for the Bulldogs. Ava Geglia and Olivia Moore each had an assist in the win. Emily Gubbins made eight saves to earn the win.

Jakyra Miller scored for Dolgeville on an assist from Ally Comstock.

Westmoreland plays at Clinton at 3:15 p.m. today in non-league play.

Lydia DeTraglia scored a pair of goals to help the Clinton girls soccer team to a 3-2 win at Canastota Wednesday in the Center State.

Deanna Heintz stopped 10 shots to earn the win in goal.

Brooke Congden and Cassondra Wood each scored for Canastota.

Mackenzi Stevens made 12 saves in goal for the Raiders.

In the boys race, Logan Baker of Waterville won in 18:41.5. Westmoreland’s Anthony Tisi was fifth and teammate Anthony Valenzano was ninth.