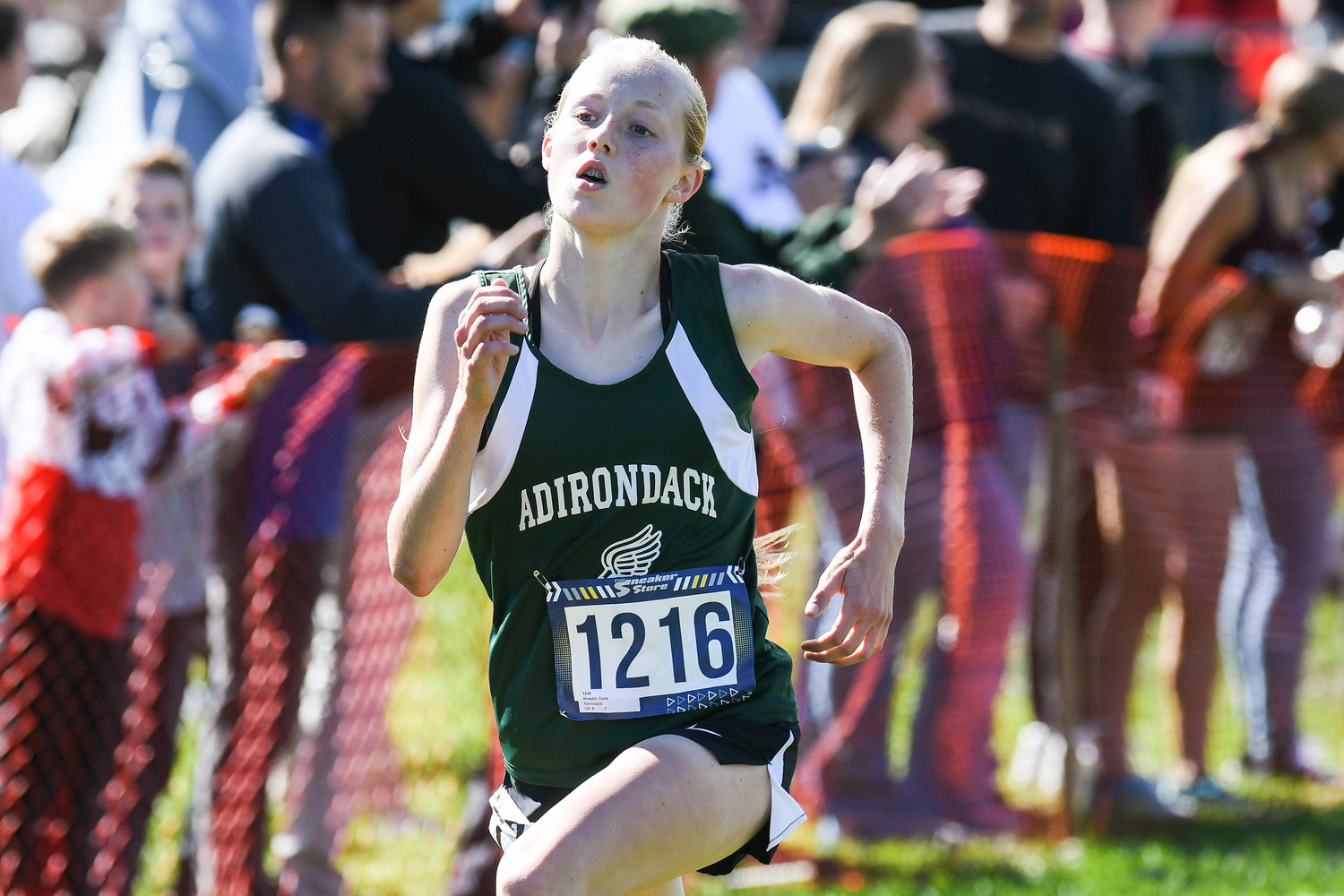 Cora Hinsdill of Adirondack won the girls varsity race at the 79th annual E.J. Herrmann Invitational at Proctor Park in Utica Saturday in 19:58.3 minutes. Her top time helped the Wildcats to a second place finish out of 18 schools.
(Sentinel photo by Alex Cooper) 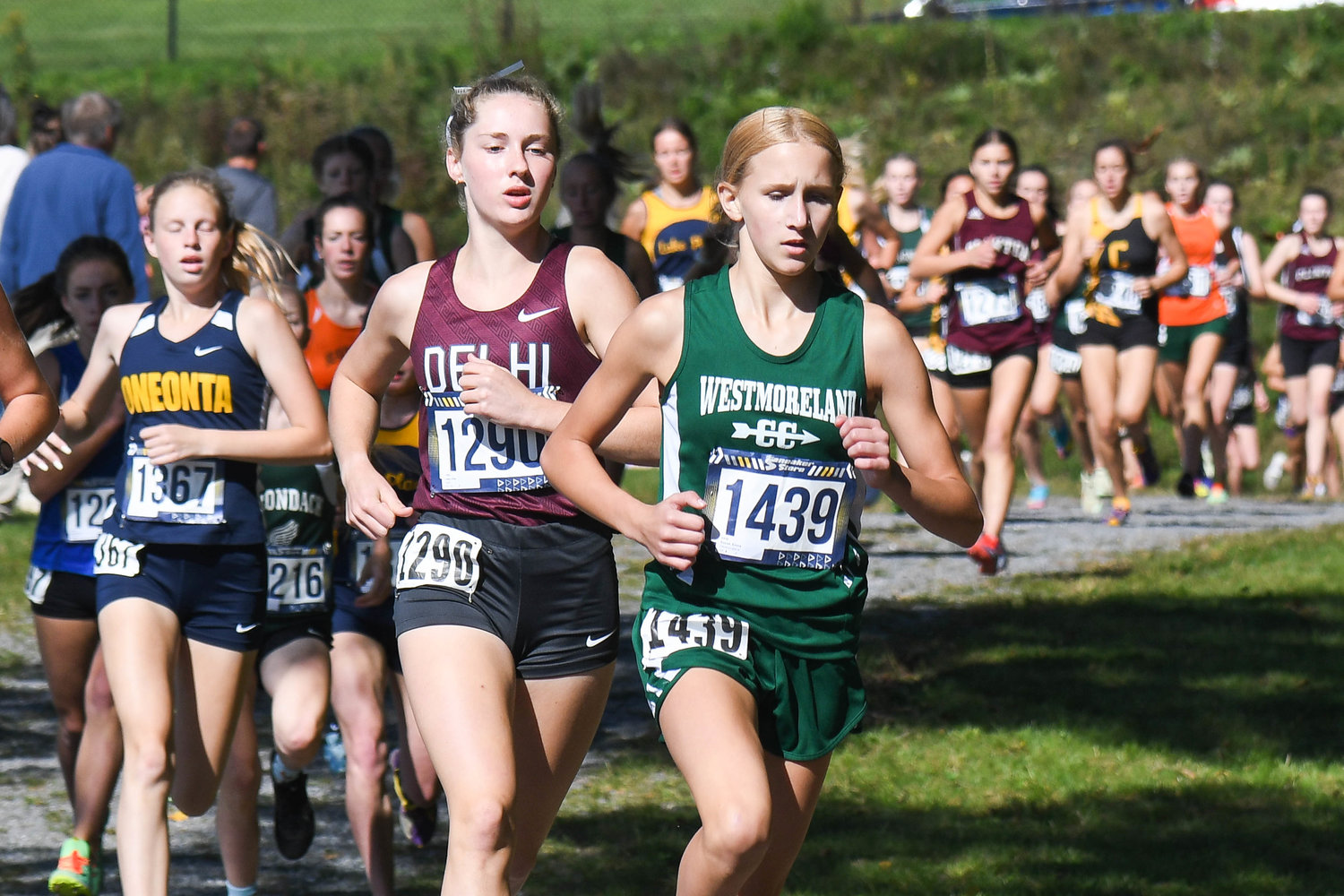 Emma Szarek of Westmoreland leads a group of runners at the 79th annual E.J. Herrmann Invitational on Saturday at Proctor Park in Utica. Szarek finished second in the race.
(Sentinel photo by Alex Cooper) 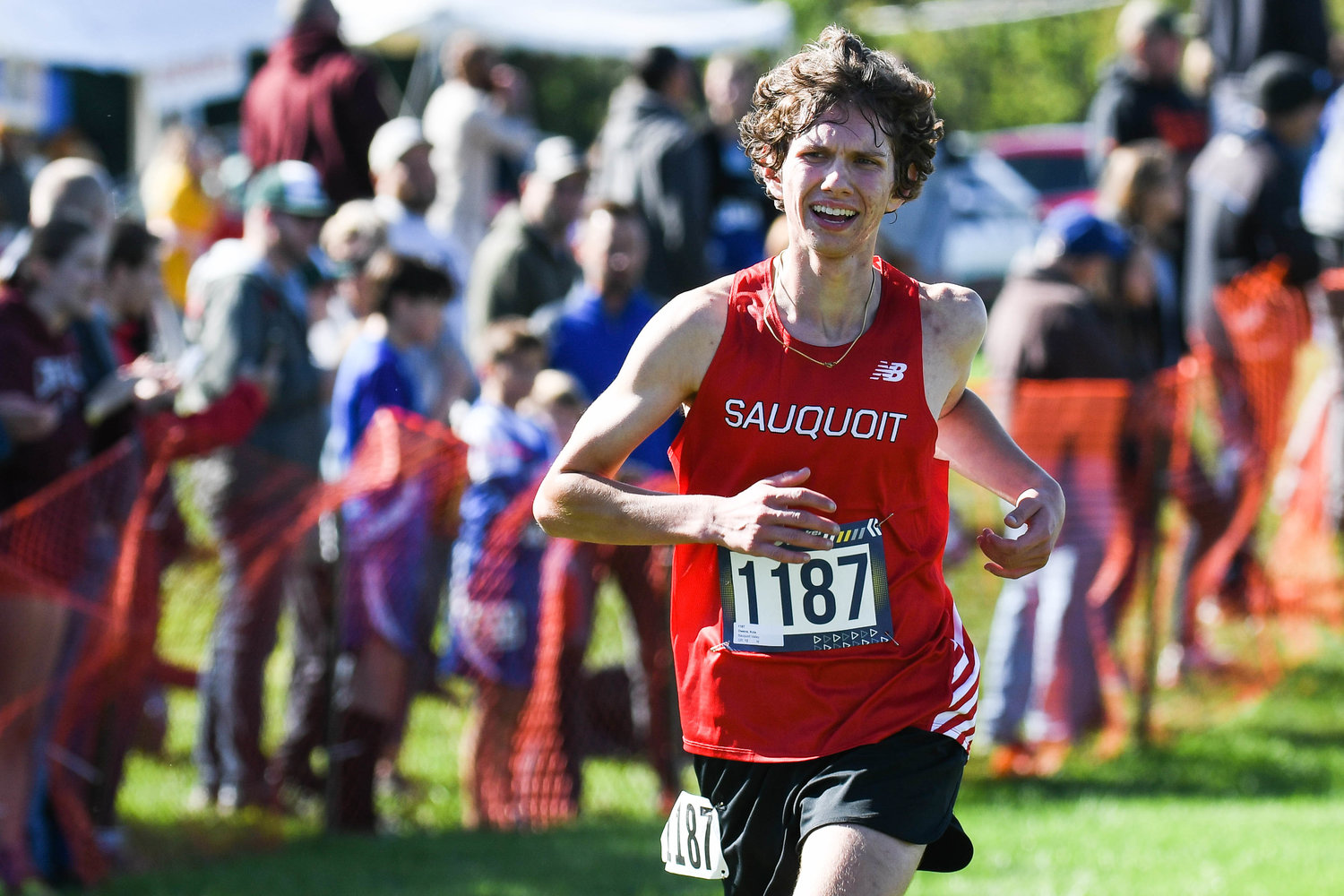 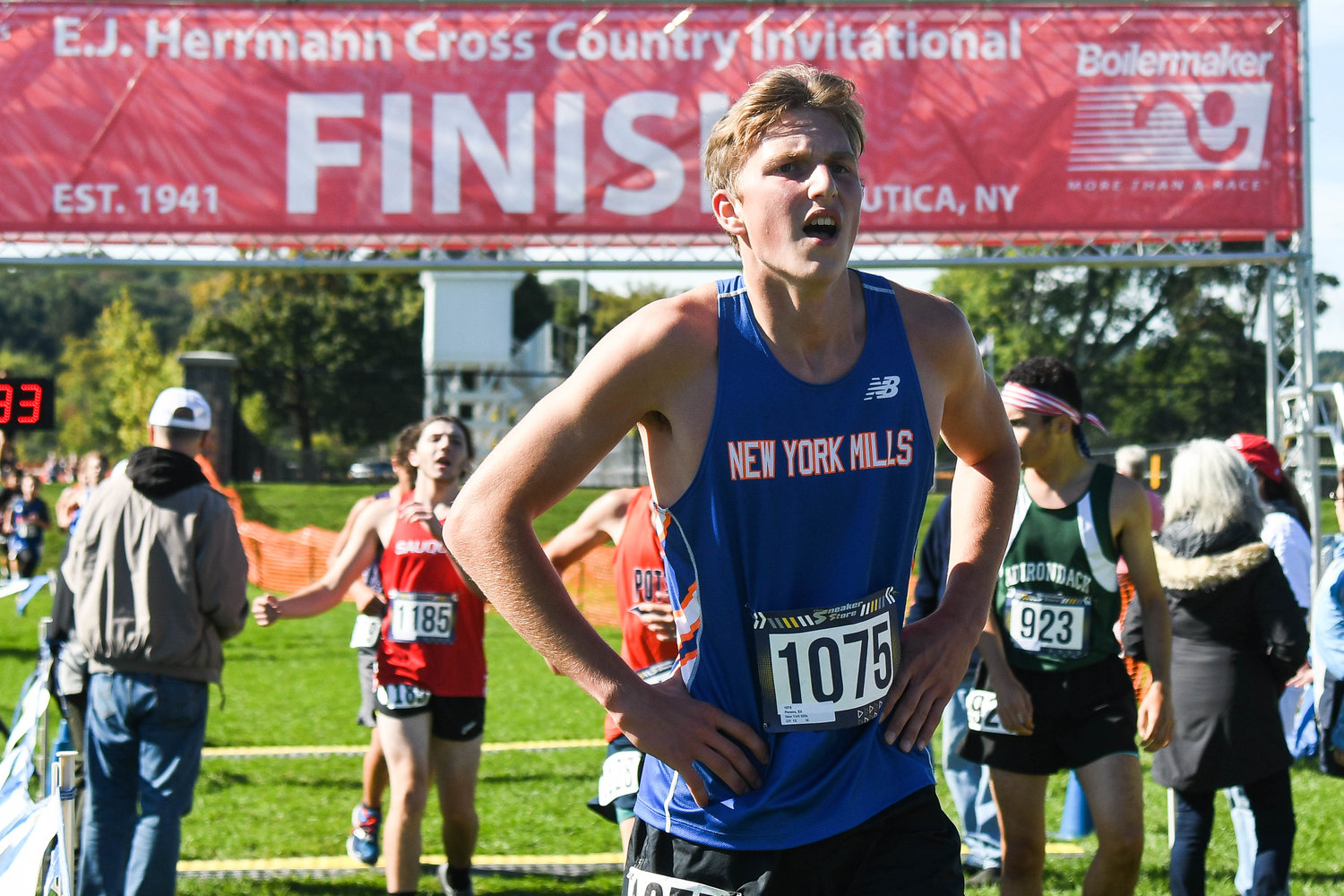 New York Mills runner Eli Pereira catches his breath after crossing the finish line during the 79th E.J. Herrmann Invitational on Saturday at Proctor Park in Utica. He finished 96th out of 171 runners in the boys varsity race.
(Sentinel photo by Alex Cooper) 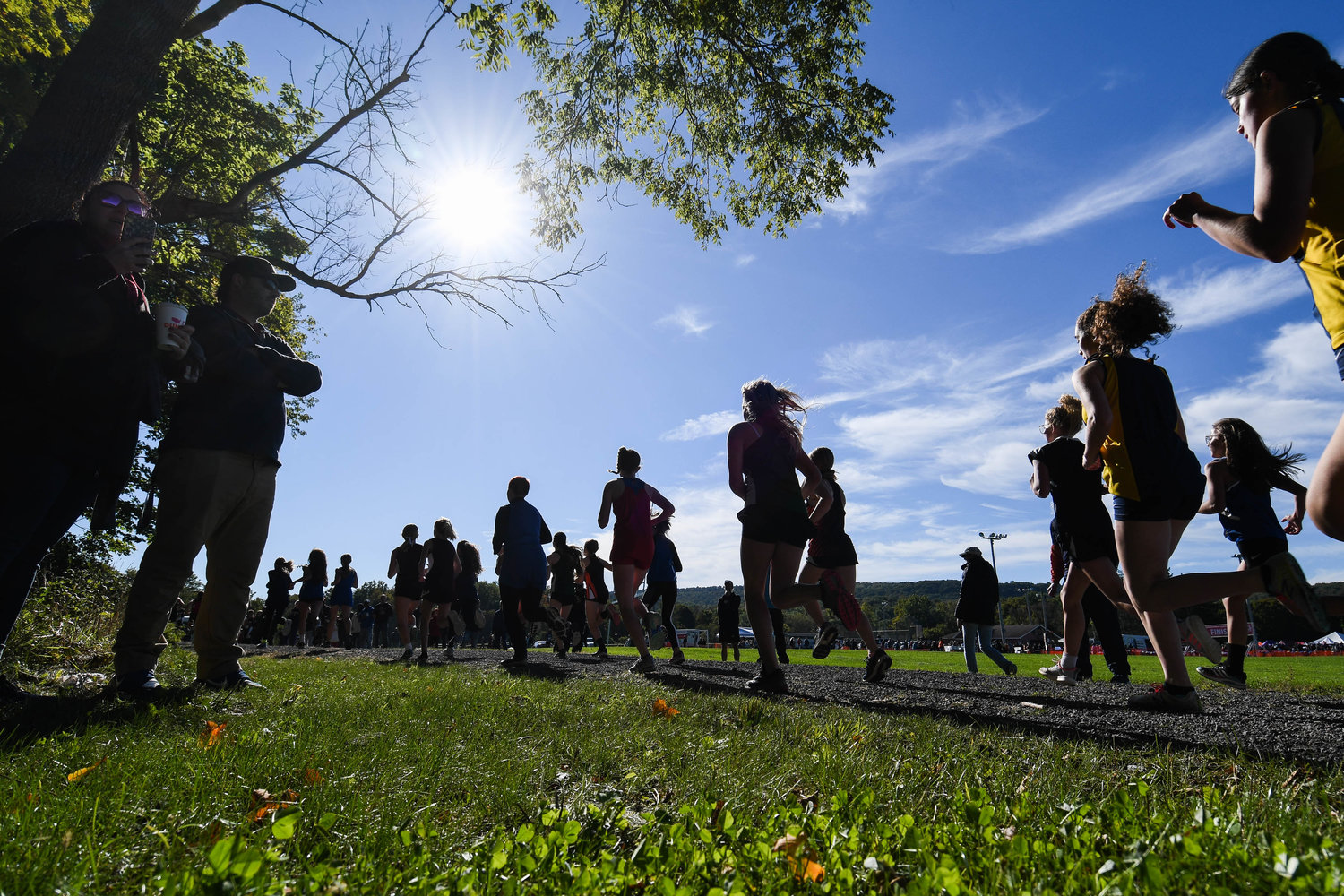 Runners make their way along the course during the 79th EJ Herrmann Invitational on Saturday at Proctor Park in Utica.
(Sentinel photo by Alex Cooper)
Previous Next
Posted Tuesday, September 27, 2022 7:30 am

Cora Hinsdill of Adirondack won the girls varsity race at the 79th annual E.J. Herrmann Invitational at Proctor Park in Utica Saturday to help the Wildcats to a second-place finish out of 18 schools. Rome Free Academy took third in the girls race and fourth in the boys race.

Hinsdill finished in 19:58.3 minutes. Emma Szarek of Westmoreland was second. Marlo Townsend of RFA was fourth. Eliana Pitts of Adirondack was 11th and Molly Myatt of Oneida was 12th. Proctor’s Megan Lew was 13th and Ellie Bartlett of Remsen/Old Forge was 15th. Adirondack’s Johannah Northrup was 18th.

RFA was first out of four large schools, with CVA second and Proctor third.

Townsend of RFA was the top finisher among the large school runners in 20:25.5. Lew was second and RFA’s Julissa Luciano was third. CVA’s Grace Lally was fourth and RFA’s Shannen Calandra was fifth with teammate Gianna Badolato was sixth. Proctor’s Jasmin Gonzalez-River was seventh, CVA’s Marcella Pronti was eighth, Kayleana Vandeusen of RFA was ninth and teammate Shavaia Parry was 10th.

The RFA Girls Varsity & JV took first place in both their races Saturday at Proctor Park as well as the individual titles. The Varsity took 1st place with a score of 24 points, while the JV scored a perfect score of 15 taking the top 5 spots in the race.

In the combined boys race result, Travis Gaffney of St. Mary’s won in 16:23. The top local finisher was Kole Owens of Sauquoit Valley in third. Other locals in the top 20 were: Camden’s Jerome Seidl in 11th, Proctor’s Nico Tidmore in 12th and Owen Sweet in 14th, RFA’s Carson Campell in 18th and Sauquoit’s Matthew Hanna in 19th. Tidmore was first in the large school group.

Fairport won the boys race with 59 points. The top finisher was Nolan McGinn of Fayetteville-Manlius in 15:22.4 minutes. VVS was 11th, New Hartford was 12th and HP was 31st. The top local finisher was Killian Bauer of VVS in 35th.

The Westmoreland girls soccer team got a 3-0 win at Clinton in the non-league play Friday.

Samantha Ferguson had a goal and an assist. Jacqueline Downs and Ava Geglia also scored.

In goal for Westmoreland, Emily Gubbins made 10 saves for the shutout.

Statistics for Clinton were not submitted.

Westmoreland improves to 6-2 and visited Little Falls Monday in the Center State Conference. Results were not available at press time.

Friday, Juleigh Herringshaw had a goal and an assist for Herkimer. Madison Marusic and Katelyn Carney also scored. Leah Bray earned an assist.

Saturday, Carney scored a hat trick for the Magicians. Leah Bray had a goal and an assist. Halonna White also scored. Aubrey Lewis had two assists and Herringshaw and Marusic had one each.

Lyndsey Vorhees made one save in net for Herkimer for the win.

Little Falls hosted Westmoreland Monday in the league. Results were not available at press time.

UAS hosts Clinton at 4:30 p.m. Thursday in the league.

Kaidan Fischer stopped all seven shots he faced in goal to help the Whitesboro boys soccer team to a 3-0 win at Fulton Saturday in non-league play.

Fulton statistics were not submitted.

Robert Paul had a goal and an assist for Oneida. Ryan Paul also scored. Ryan Hughes had two assists and Cash Kistner and Wade Butler had an assist each.

Kannon Curro made five saves in net for Oneida.

Canastota’s goal was scored by Donovan Schmidt on an assist from Joey Kauzlauskis. Goalie Connor Russell stopped 22 shots for the Raiders.

Oneida played at Stockbridge Valley Monday. Results were not available at press time.

Sauquoit wins with one goal

Zachary Latino scored the game’s lone goal in a 1-0 win for the Sauquoit boys soccer team at Herkimer Saturday in the Center State.

Aaron Johnson assisted on the goal. Alex Prichards stopped all five shots he faced for the shutout.

Sauquoit played at Clinton Monday. Results were not available at press time.

The Rome Free Academy field hockey lost 2-1 to Shenendehowa Friday then beat Massapequa 3-0 Saturday in a pair of non-league games at Shenendehowa.

On Friday, Isibeal McMahon scored the Black Knights’ lone goal on an assist from Drew Kopek. Jaylene Rodriguez made four saves for RFA in goal.

Statistics for Shenendehowa were not submitted.

Saturday, RFA scored a pair of second quarter goals then added another in the third to pad the lead. Fiona McMahon scored twice and Dani Kopek added a goal. Cara Mecca and Alexa Thompson had an assist each. Rodriguez stopped three shots and Jillian Buczkowski had two stops to combine for the shutout.

Gracen and Gretchen Grimm had a goal and an assist each for the Warriors. Elise Pape also scored and Skyler McFadden earned an assist.

Chloe White allowed one goal on one shot in goal for Clinton, earning the win.

HP hosted Vernon-Verona-Sherrill in the league Monday. Results were not available at press time.

New Hartford hosted Whitesboro in the league Monday. Results were not available at press time.

Holy Bullischeck earned the shutout in goal for the Bulldogs.