The 1981 Rome Free Academy varsity football team, which was ranked No. 1 in New York state and coached by Hall of Famer Tom Hoke, is the 2020 recipient of the Rome Sports Hall of Fame’s Ellie Bruce … 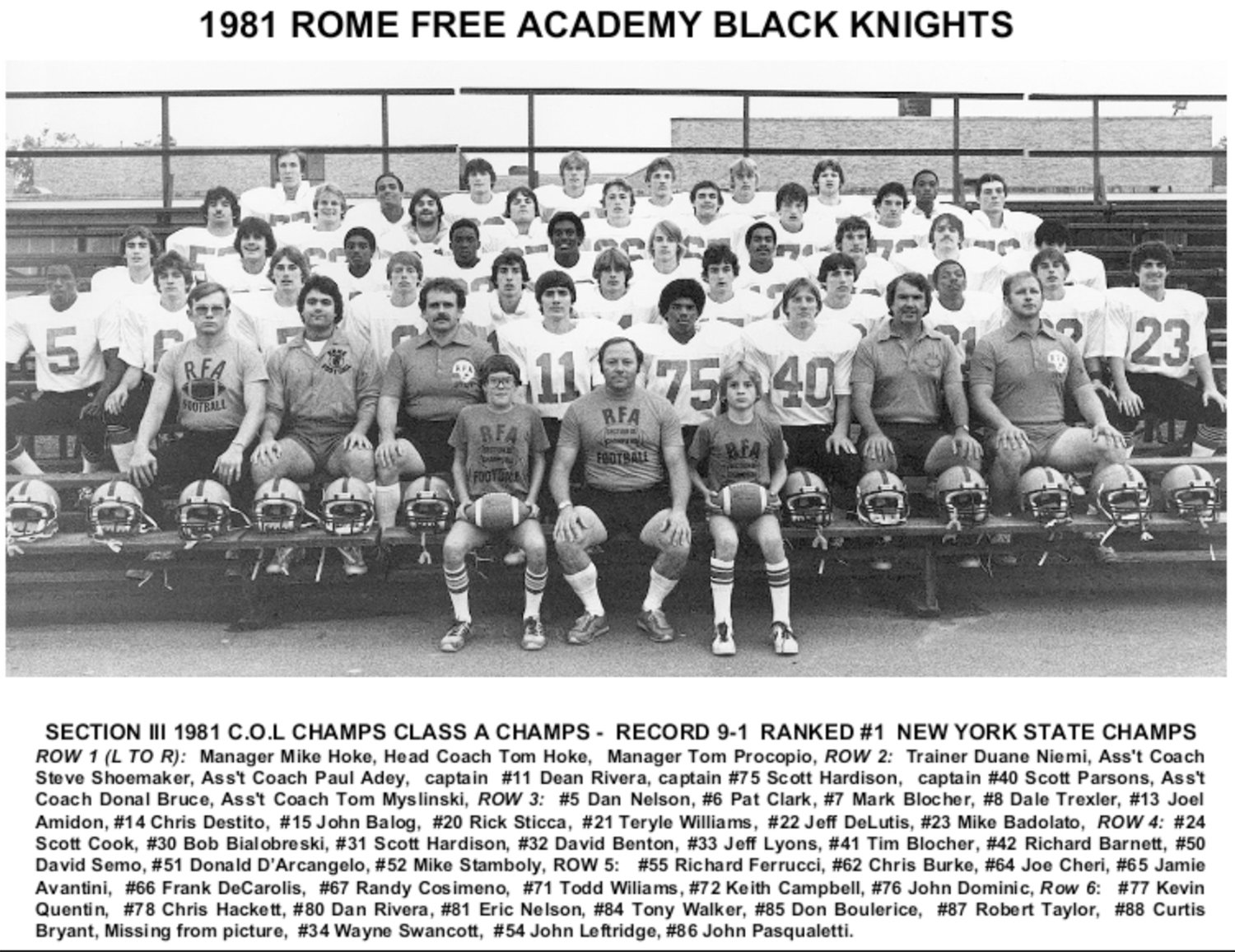 The 1981 Rome Free Academy varsity football team, which was ranked No. 1 in New York state and coached by Hall of Famer Tom Hoke, is the 2020 recipient of the Rome Sports Hall of Fame’s Ellie Bruce Exceptional Team of Excellence Award.
(Photo submitted)
Posted Friday, July 8, 2022 6:30 am

The 1981 Rome Free Academy varsity football team, which was ranked No. 1 in New York state and coached by Hall of Famer Tom Hoke, is the 2020 recipient of the Rome Sports Hall of Fame’s Ellie Bruce Exceptional Team of Excellence Award.

The team award is sponsored by Bruce, a co-founder of the Hall and longtime member of the board of directors. Honorees are recognized with a permanent awards plaque at the Hall.

Coach Hoke was quite lavish in his praise for this 1981 New York State Championship RFA football team.

“I hate to compare one team to another,” he says, “but this team would equal any of the teams I have ever coached. This team was tough, disciplined and smart. We lost a heartbreaking early season game by one point to West Genesee. That loss could have caused us to suffer a demoralizing letdown, but we didn’t. Instead we wouldn’t lose another game all season long, and came back to beat West Genny 22-6 in the state championship game. The key word for this team was determination.”

Much of the 1981 team’s success was forged in the weight room during the previous summer and during the regular season. “Their dedication to the weight room really paid off in that we had a record number of players make All-League, Sectional and State All-Star teams. This team had very few weaknesses and these young men did everything the coaches asked them to do and did it extremely well,” Hoke said. “However, this wasn’t a team of individual stars. The 1981 championship RFA football squad was the ultimate TEAM — a team of brothers all the way as in the Rivera brothers, quarterback Dean and wide receiver Dan, who between them accounted for 20 touchdowns. Dean would complete 54 passes during the season, 30 of those passes to his brother Dan.”

One of that championship season’s tri-captains, Scott Parsons lauded the coaching staff.

“No way, no how could you find better coaches than we had. They made sure that each one of us knew what we had to do and what everybody else had to do on every play, and they made sure we did it the right way. This group of players started in the seventh grade and stuck together through our senior championship year. Now almost 40 years later lots of us still hang with each other.”

Parsons agrees with Hoke that the highlight of that year was the revenge win in the championship game over West Genny. “That was huge!”

There will be a reception for inductees and other award winners at the Rome Sports Hall of Fame from 2-3:30 p.m. on Sunday, July 31.

The Rome Sports Hall of Fame is located at 5790 Rome-New London Road, to the right of Erie Canal Village and the parking is to the right of the building and the entrance to the Hall is in the front facing the Village. Extra parking will be available in the Village parking lot.

The annual induction awards banquet will be held Sunday, July 31, at the Vernon Downs Casino and Hotel starting at 5:30 p.m. The tickets are $35 each. Tickets for children 12 and under are $15. Tickets may be purchased at Rome Sports Hall of Fame.