No property tax increase for the sixth consecutive year and adding to the city’s workforce were positives taken from Mayor Jacqueline M. Izzo’s proposed 2023 budget. 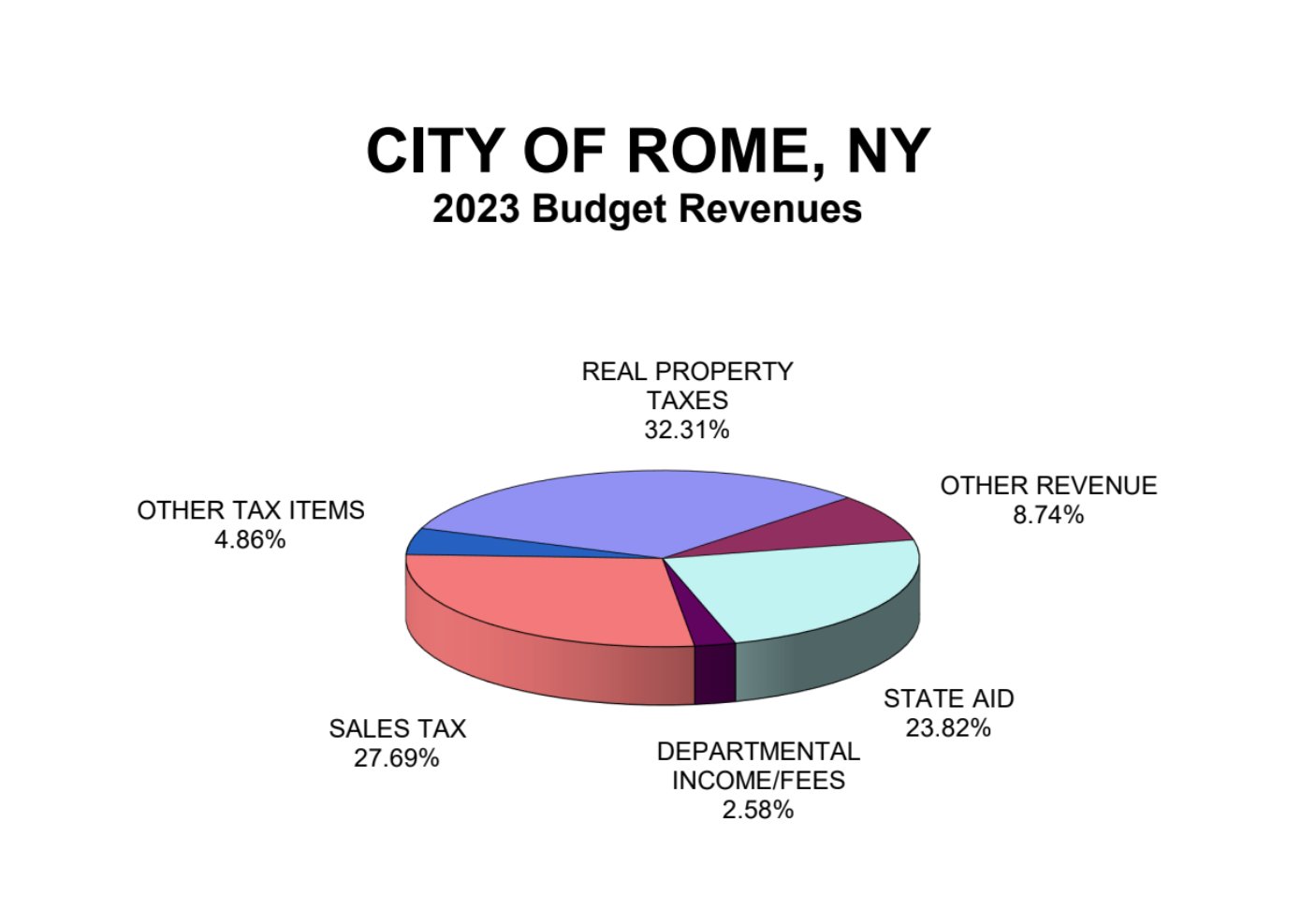 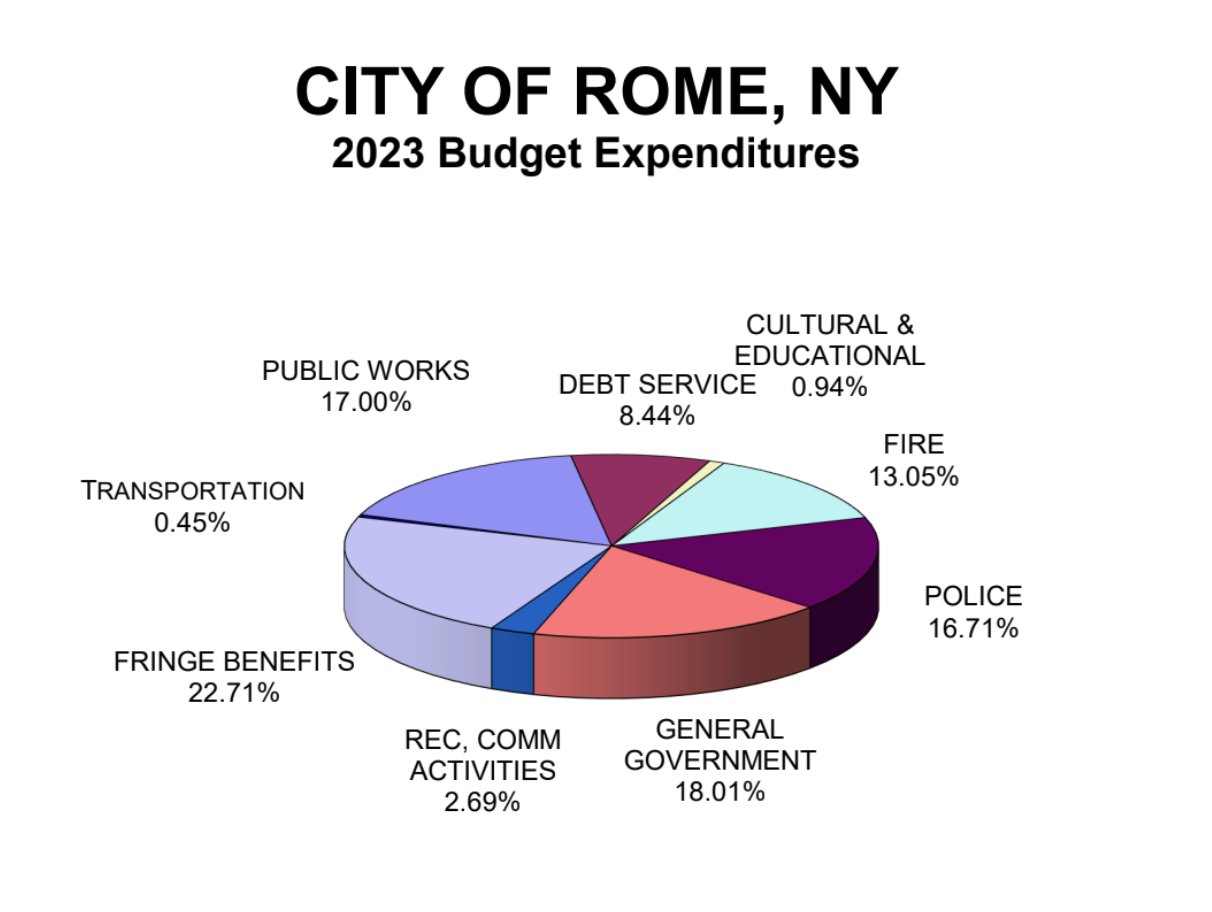 ROME — No property tax increase for the sixth consecutive year and adding to the city’s workforce were positives taken from Mayor Jacqueline M. Izzo’s proposed 2023 budget released Wednesday, according to some members of the Common Council.

However, councilors also expressed some dismay that more resources and manpower for Rome Police were not among the mayor’s priorities as they continue to battle crime within the city. At least two members of the public during Wednesday’s Common Council meeting complained of increased crime in Rome, including a number of recent cases of break-ins, robberies and gang activity.

While city councilors received copies of the proposed $48,967,418 city budget for 2023 late Wednesday and did not wish to make specific comments on the proposed spending plan until they had ample time to review it, councilors did offer some initial opinions on Izzo’s seventh budget message, delivered prior to the regular Common Council meeting.

First Ward Councilor John M. Sparace said having no tax increase for the upcoming year will help residents, and learning that sales tax revenues continue to grow with the addition of several new businesses shows that the city is on the right track.

“Increases in sales tax revenue as well as the increase in assessed property values are areas that have helped the administration have the ability to present such a positive budget presentation,” said Anderson. “This is good news, and demonstrates that the city of Rome is moving in the right direction for not only 2023, but also for the years ahead.”

Third Ward Councilor Kimberly Rogers said no tax increase was good news for residents in a time of “runaway inflation, including astronomical increases in food prices, utilities and fuel.”

“Residents simply can’t afford to pay more,” Rogers said. “We have made tremendous progress in the community and economic development areas of new housing and business development, and those have led to an increase in our assessed value and sales tax revenue, which is great news for taxpayers. That said, it looks like we are using a significantly larger portion of our fund balance compared to 2021, so I’ll be looking at that.”

“Even with signs of inflation under the leadership of Mayor Izzo, Rome continues to move forward with construction in housing options and growth in business development,” she said. “The continued growth of housing options and business development continue to improve quality of life in our community and play a key role in where people choose to live, and it attracts new talent to our community. The city’s assessed value is also positive, as it will raise from $834,570,000 to $837,000,000 in 2023.”

While the mayor mentioned that she and her staff would begin negotiations with city employee unions in the upcoming year with contracts expiring, Sparace said the administration needs to keep in mind that it was these city employees who were asked to do more with less, and to rise above all the roadblocks faced during and in the aftermath of the COVID-19 pandemic.

Sparace also commended the mayor’s proposed plan to bolster the city’s workforce, helping with day-to-day activities throughout the city. However, the police and fire departments were not considered in the message, he said.

“I am disheartened to see that our Public Safety (police and fire) positions are not being added to, like other departments are being bolstered,” said Sparace. “In the time when Public Safety is one of the most important pieces to our city, we aren’t looking to add positions or to be creative to give our men and women who risk their lives every day, more resources or manpower. As we all know with Bail Reform, our police officers are going above and beyond to try and curtail the crime in our city, but they have an uphill battle.”

He continued, “Even if we are not fully staffed in our police department, there is no reason as to why we cannot add personnel. Maybe we need to look at other municipalities around our area and adjust our pay scale to make Rome an ideal place where people would want to join our police department — we all know it all comes down to dollars and cents. I am all for being fiscally responsible, but we need to think outside the box to attract more people who want to work for us in Public Safety.”

“It’s great the administration is hiring more people, but among the most important departments is our police and fire, yet the police department is short-handed,” Mortise said. “If we can’t find people” to build the police and fire departments, “then give them some type of incentive to encourage people to work for the City of Rome. But instead, we spend $36,000 on fixing Tosti Pool.”

Fifth Ward Councilor Anderson said he was concerned about some personnel changes proposed by Mayor Izzo, and looks forward to the budget review process and meeting with department leaders to learn more as to why the changes were necessary. Some of the mayor’s proposed workforce changes included the addition of a third city planner, salary and classification upgrades for the Engineering Department, plus additions to Animal Control and the Electrical Department.

“The mayor cited the need to be competitive in a very demanding job market, and I agree with that, but we must also need to make sure each of the changes, and the added personnel, are necessary,” Anderson said.

As for the additional staff member for Community and Economic Development, “We have a great Economic and Community Development Department, in light of the hard economic times, the mayor stated we have managed to secure over 40 grants. This is huge and we need to continue with this trend, it’s great for our city,” said Sparace.

Smith said workforce development is important to the success of any business or municipality.

“When there are in-house promotions the advantage to the organization is it reduces the cost of recruiting and training,” she said. “It also reduces turn-over rates and the new jobs will help to add to the economy of the city.”

Meanwhile, as the mayor’s message touched on each department, Anderson said there was “little mention” of public safety.

“With all of the changes the City of Rome has had in the past couple of years, I am surprised that the Budget address would be silent on Public Safety,” said Anderson. “We need to always keep Public Safety as a top priority, and updates in each of the Public Safety areas are important.”

Mortise said while no tax increase of the sixth consecutive year is great for residents, “maybe a 0.5% increase would be enough to hire more police officers to get crime down in our city and keep our residents safe.”

Rogers said while the administration is proposing to add 10 new employees, offer three promotions and upgrade two positions from part-time to full-time, “As a councilor, the issues that I hear most frequently from residents are related to public safety and code enforcement, so I am disappointed that none of the additions were in either of these two
departments.”

The councilor continued, “As I drive through the city, I’m seeing that our neighborhoods are becoming riddled with code violations and increased criminal activity, and unfortunately it is going to continue to deteriorate unless we make a concerted effort to deal with these issues head-on. Providing the highest level of city services is certainly a priority, however, I believe that public safety and code enforcement should be at the very top of the priority list.”

Both Sparace and Mortise expressed appreciation for the proposed budget’s focus on enhancing Parks and Recreation facilities such as Kennedy Arena, and recreational trails such as rehabilitating the Haselton Park trail and continued work expanding the Mohawk River Trail.

Mortise added, “Continuing work on our walking trails through Rome is a great thing. I’m extremely happy to see this progressing.”

“It was also nice to see that our water expansion phases are progressing and our sewer infrastructure are continuing to be improved,” Sparace said. “Getting sewer infrastructure replaced in parts of my ward will be essential to the Woodhaven Development project, that will bring much needed housing to our city.”

Anderson said, “I was very happy to hear the mayor mention that critical upgrades to our water and sewer infrastructure will take place in early spring. This is long overdue, and this project needs to be completed so that every house and family that live in the City of Rome have access to Rome’s water and sewer system. I look forward to the planned improvements in the Northwest Rome, so that the project can be completed and we can address needed road repairs in areas such as Lorena Road.”

While some councilors described the mayor’s proposed spending plan as “fair,” the overall consensus was that line items need to be reviewed as the budget process continues. The deadline to adopt the city budget is Nov. 1.

“Overall, the mayor’s budget proposal seemed fair, but I think there are other areas, as I stated that need to be looked at further,” said Sparace. “I myself as a city representative will take the time to go through the proposal and to see if there are any areas I am able to adjust to not only help our city employees, but also help our residents in the City of Rome.”

Rogers noted, “While the council has no control over employees, positions, and salaries, we will do a line-by-line review of each department to find other areas of savings and improvements. I’m looking forward to working with the administration throughout the review process.”

Sixth Ward Councilor Riccardo D. Dursi Jr. said, “Overall I am pleased that there will be no tax increases this year. With inflation hurting everyone, and gas prices not falling as fast as they rose, it’s been a challenge for our residents to make ends meet.”

He said, “Getting a first look at the proposed budget last night, I am glad we are now looking forward again with proposals for more staff to help with workload. We are only beginning to see how COVID affected our communities and need all the help we can get to deal with blight and eviction moratorium, the issues of rising crime rates, and challenges of our current businesses. Over the past year all city departments and City Hall staff have done a great job in dealing with these issues in Rome, but we need more help and hopefully this budget will begin to address those areas.”

Smith said overall, “The mayor delivered a clear proposed budget for 2023. The proposed budget is fiscally responsible and allows for sustained economic growth of the city, providing efficient city services, as well as enhance the quality of life for residents.

It’s important to note that this will be the sixth year with no increase in property tax while water, sewer and refuse cost will remain the same.”