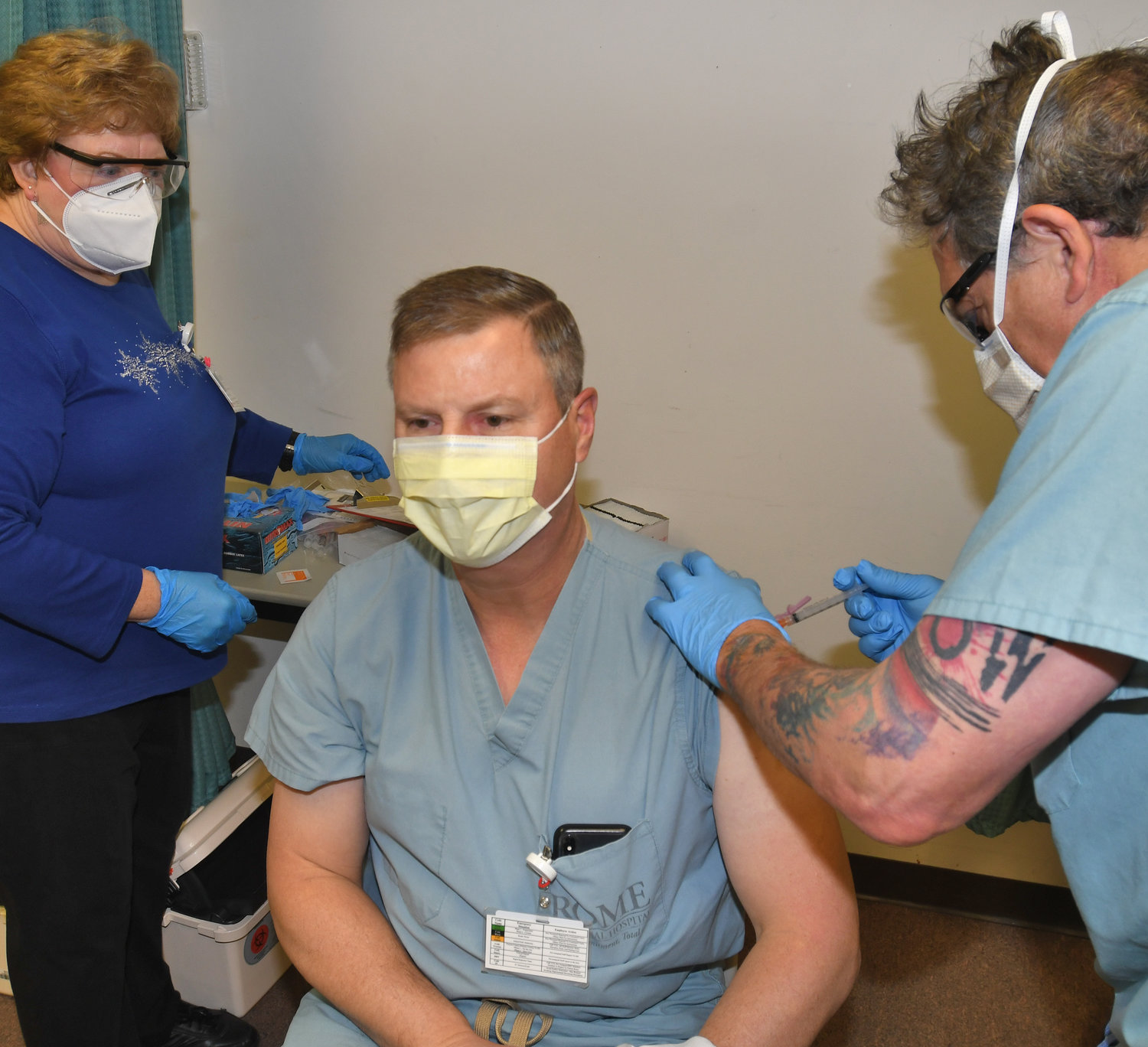 Members of the Rome Memorial Hospital staff and administration began receiving their first doses of COVID-19 vaccinations on Wednesday, an early Christmas present in the continuing effort to overcome the COVID-19 virus.

The hospital received a shipment of the Moderna vaccination late Tuesday with vaccinations beginning bright and early Wednesday morning and continuing throughout the day for healthcare workers and staff who interact most closely with patients.

According to hospital officials, it is hoped that the initial allocation of 400 doses by Moderna will be completed for those who have primary interaction with patients. A second dose will be given in four weeks time, said Emma Ingalls, director of infection prevention at the hospital.

Ingalls said the first dose gives the recipient some protection while the second dose is a booster that will provide immunity. “We’re very excited,” she said.

According to federal officials as well as documents released by Moderna, an American biotechnology company based in Cambridge, Mass., its COVID-19 vaccine is 94% effective at preventing symptomatic illness. The vaccination also appears to prevent the spread of the virus as well, both federal health and company officials said. The Moderna vaccine was the second of two vaccines currently approved by the federal government for COVID-19 with the other being manufactured by the Pfizer pharmaceutical company.

While the vaccination process gets under way at Rome Memorial Hospital, it will not take the place of required safety protocols at the hospital, including mask wearing, said Dr. Andrew Bushnell, medical director of the hospital’s Emergency Department, who received his vaccine.

Bushnell said that typical side effects from the vaccine are not that different from a flu shot.

According to the federal Centers for Disease Control, these side effects can include a sore arm, a fever and some flu-like symptoms — such as fatigue, aches, chills and minor headache.

The Emergency Department director added that achieving widespread
vaccination of the public was “the only way out of this crisis” as “the virus is highly transmissible.”

On Wednesday, hospital officials were waiting on information regarding the delivery of additional doses.

According to state and federal guidelines, the first New Yorkers to receive the vaccine will be high-risk hospital workers, such as emergency room workers, intensive care unit and pulmonary department staff, followed by nursing home residents, nursing home staff, long-term and congregate care residents and staff, emergency medical system workers and other health care employees, coroners and medical examiners. Following them will be police, firefighters, teachers and grocery and other essential workers, according to a CDC advisory panel.

As of late Tuesday, there were 137 county residents were hospitalized with COVID: 14 in Rome Memorial Hospital, 113 in the Mohawk Valley Health System, and 10 in some other county. Among the total, eight were nursing home residents. A total of 198 people have died as a result of the virus in Oneida County since the pandemic arrived locally in mid-March.

Also as of late Tuesday, the county had 3,759 known active cases, with another 3,026 in mandatory quarantine because of close contacts with someone with a recent positive test.

For information on screening and what to expect from a COVID-19 vaccine, visit: the Centers for Disease Control online at: https://bit.ly/2WT7cC9