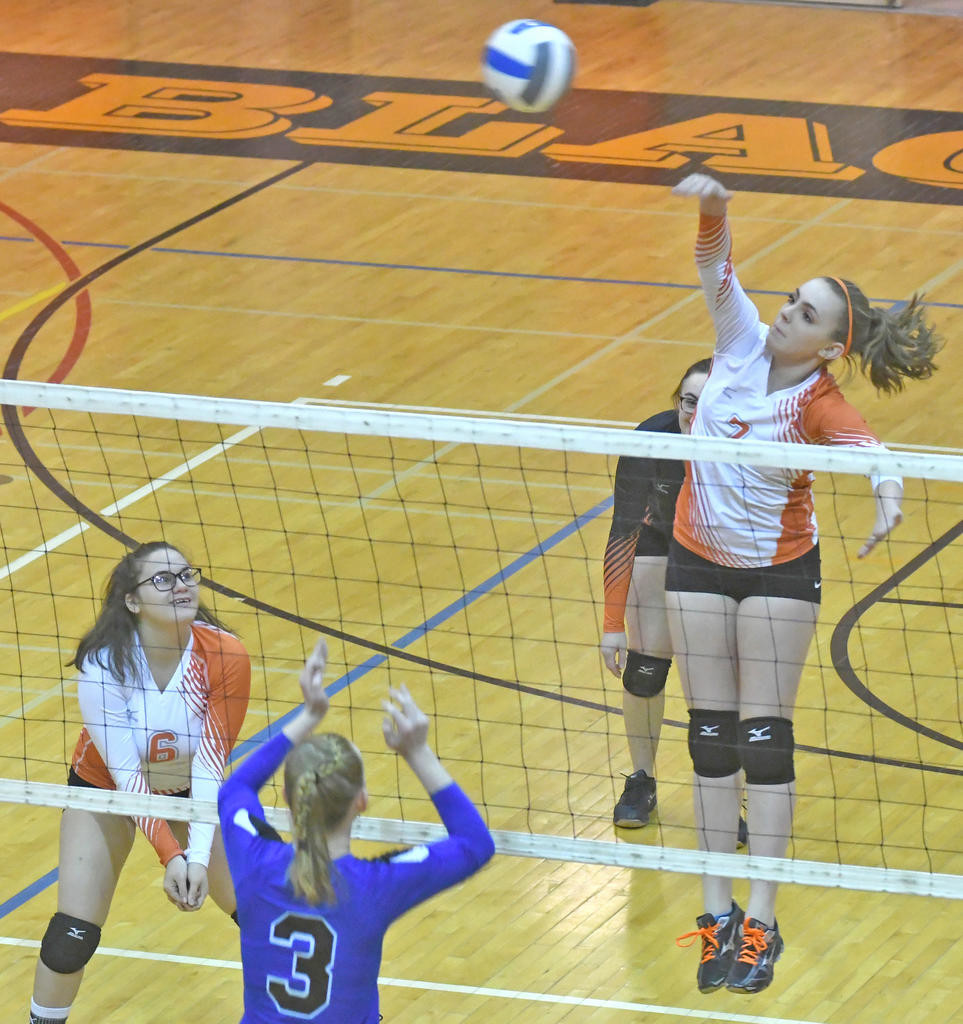 BACK TO SENDER — Rome Free Academy’s Maria Keeney spikes the ball over Camden’s Abby Walker with RFA teammate Jetsy Castillo Fontanez, left, readying for a return during Thursday night’s match at RFA. Keeney had nine kills and five blocks for the Black Knights during their 3-1 win. (Sentinel photo by John Clifford) 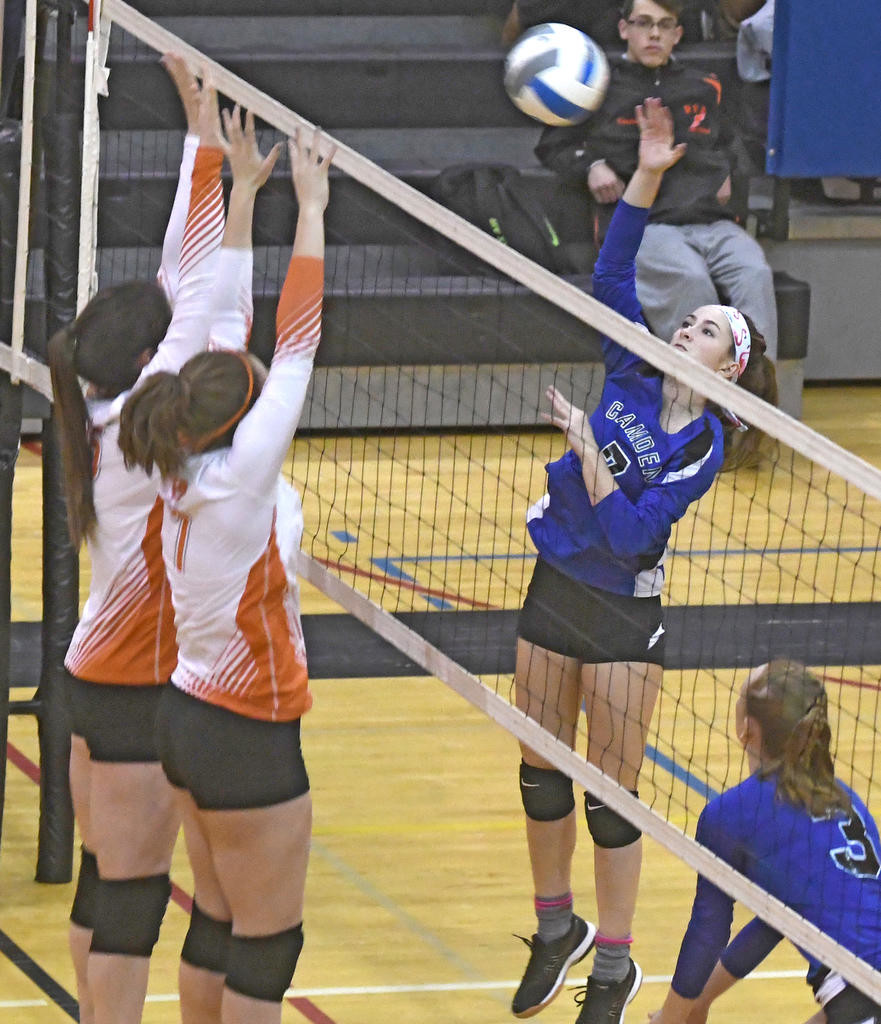 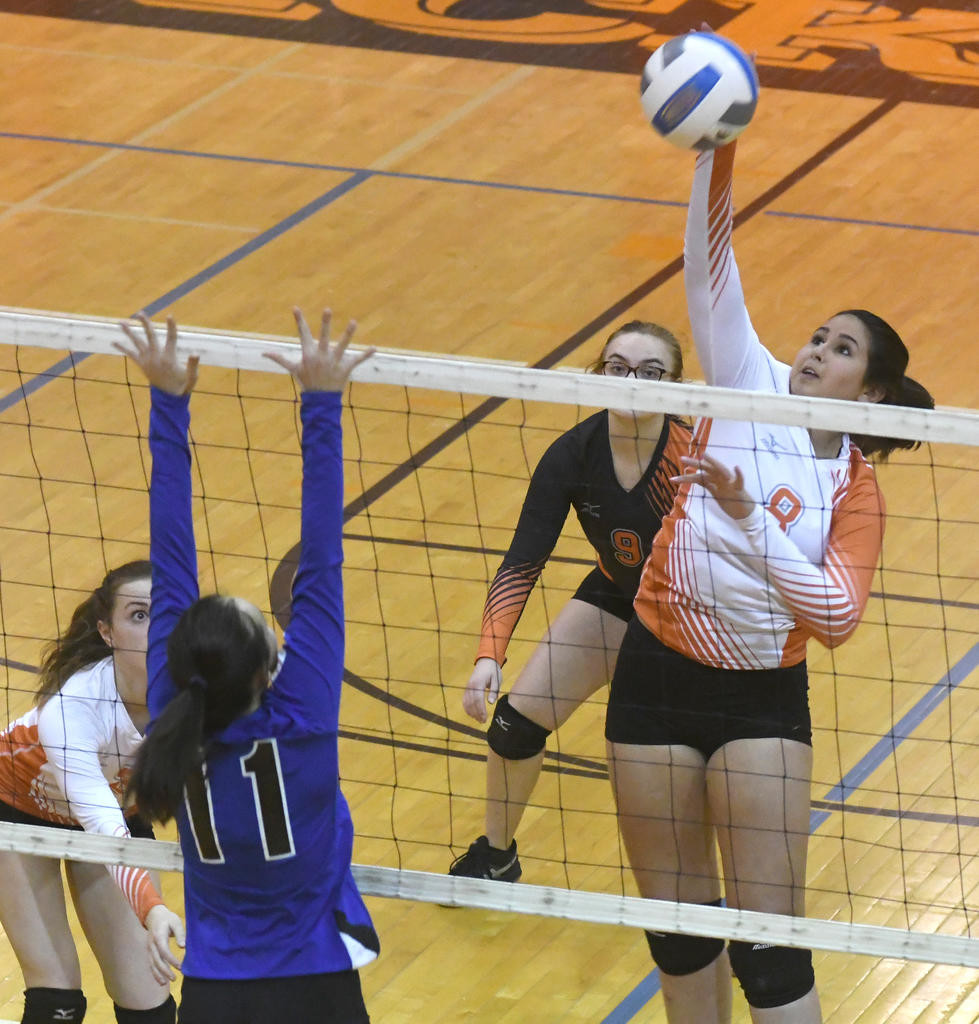 Maria Keeney had nine kills and five blocks for the Black Knights and Kate Mastracco had two aces, three kills and two digs for RFA in the win.

Kailey Roberts had seven kills and 10 digs for the Red Devils and Sarah Wayland-Smith had two aces, eight kills and three digs in the win.

For Oneida, Zoey Fox had six assists and three digs. Nicole Smith had eight digs and three kills for the Indians in the loss.

The RFA boys swimming and diving team remained undefeated with a 97-80 home victory over Oneida.

Dragojevic also won the 50 freestyle and the 100 breaststroke events for the Black Knights and Tanner Brawdy won the diving event. Sorbello came in first place in the 100 freestyle for Rome.

Owen Rose had nine digs, eight assists and three kills for the Red Devils and Brennan Miller had six digs and 10 assists. Cole Smith had 21 digs for VVS in the loss.

Noah Mills rolled the match-high game and series for the Wildcats, shooting a 194 game and finishing with a 561 series.

Sara Crisan rolled the match-high game of 222 and finished with the match-high series of 627 for the RFA girls bowling team in its 10-1 TVL victory over VVS at King Pin Lanes.

McKenzie Pantola added a 213 game and a 592 series for the Black Knights.

Mackenzie O’Herien had a 214 game and a 615 series for the Red Devils.

Kylee Long rolled a match-high game of 234 and a 640 series for the Blue Devils and Erin Bourgeois added a 201 and 566 series for Camden.