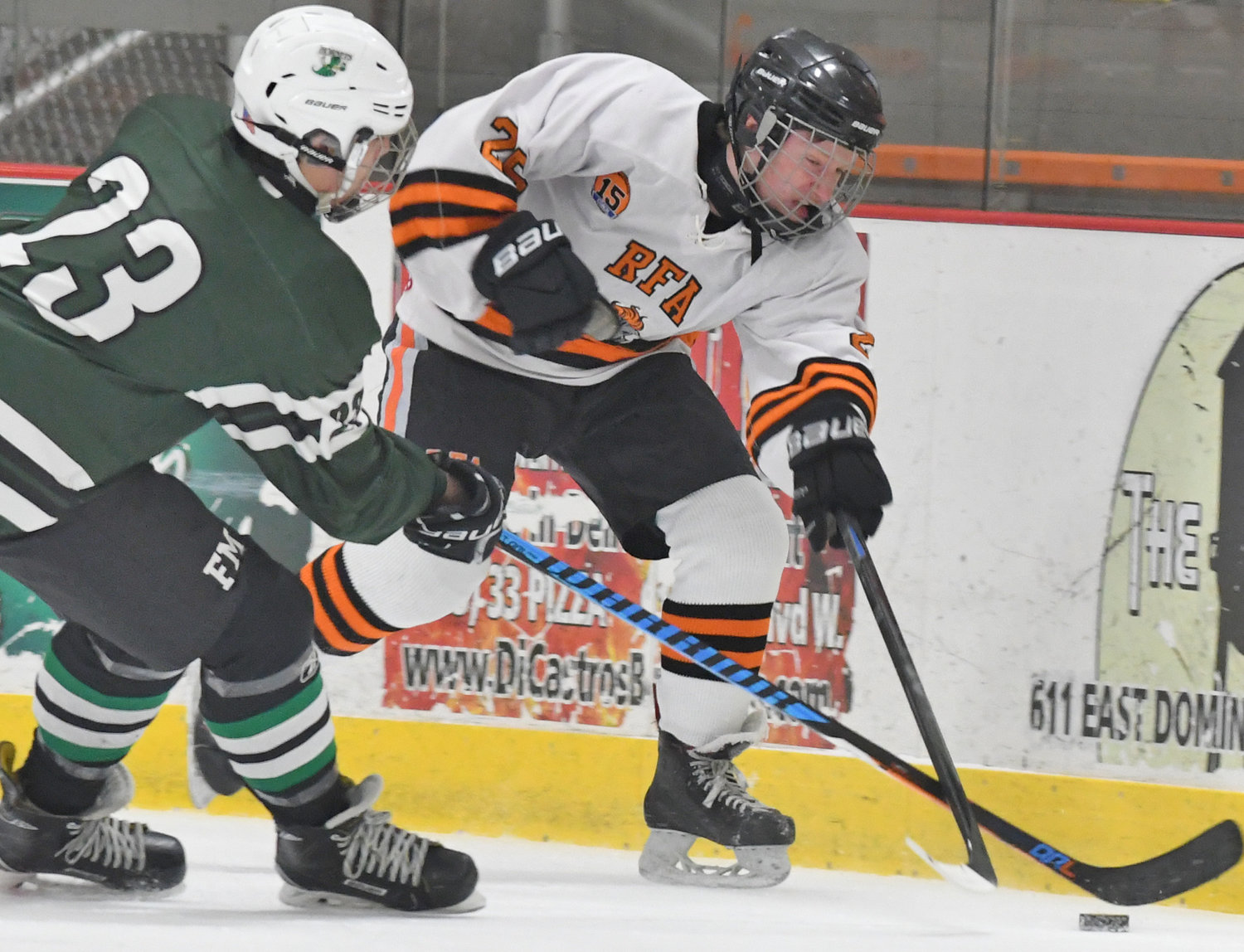 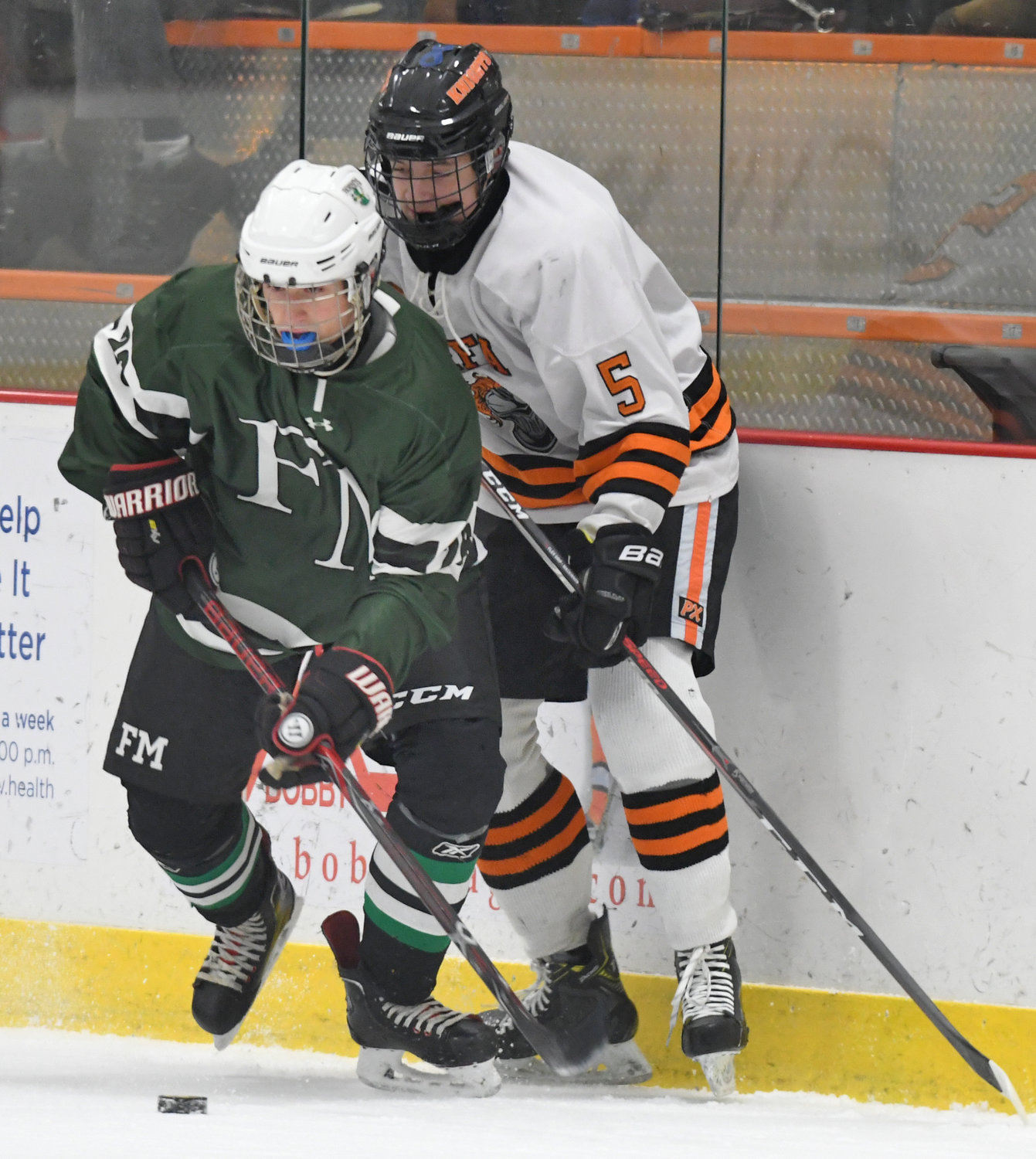 LOOKING TO CONTROL THE PUCK — Joey Gulla of RFA, right, battles with F-M’s Colin Debejian along the boards in the first period of Tuesday’s game at Kennedy Arena. The Hornets beat the Black Knights, 2-1.
(Sentinel photo by John Clifford) 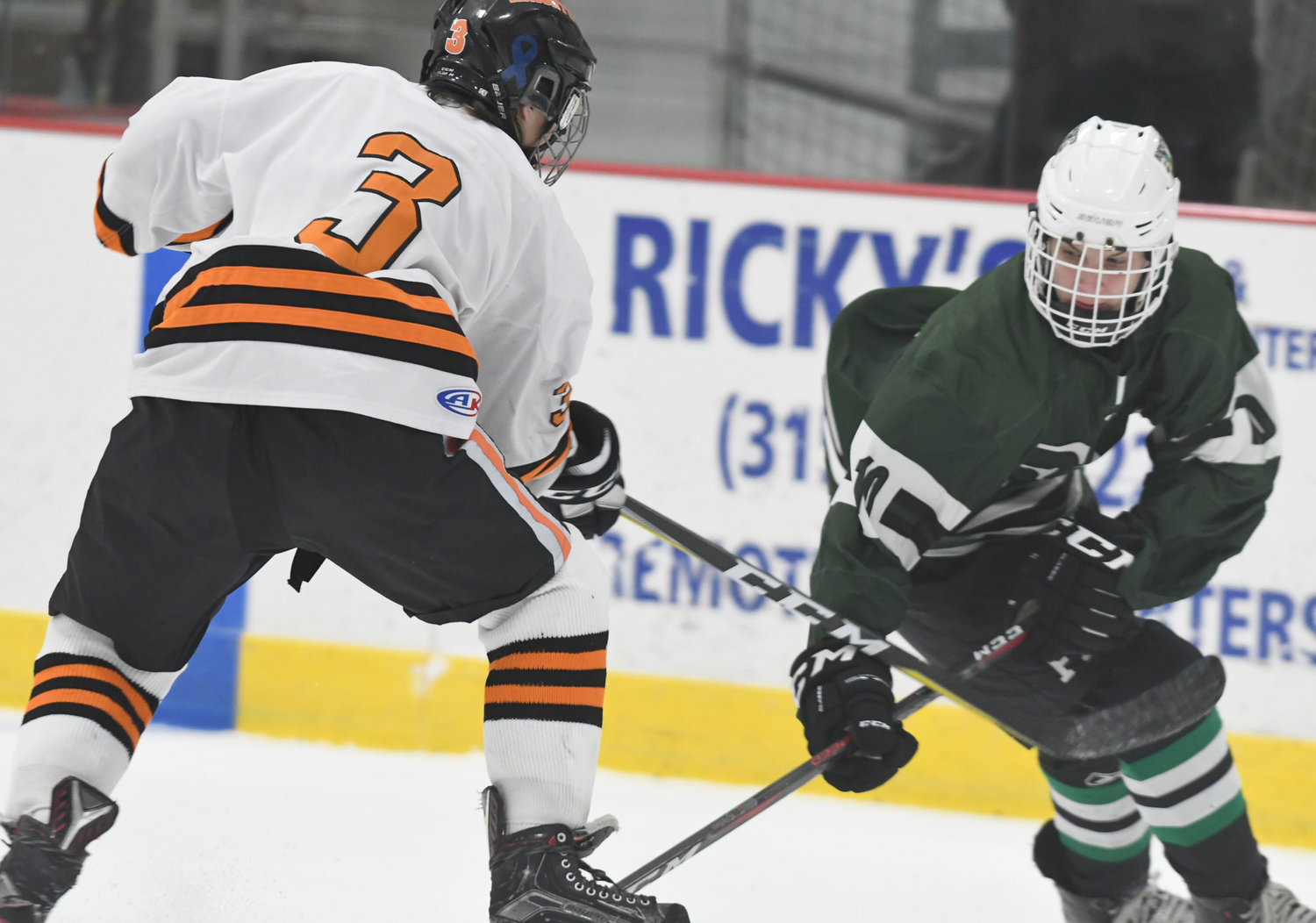 TRYING FOR A TURNOVER — RFA forward Kyle Lubey, left, tries to steal the puck away from Fayetteville-Manlius forward Josh Kuchinski during Tuesday’s game at Kennedy Arena. The visiting Hornets scored the first two goals and held off RFA for a 2-1 win.
(Sentinel photo by John Clifford) 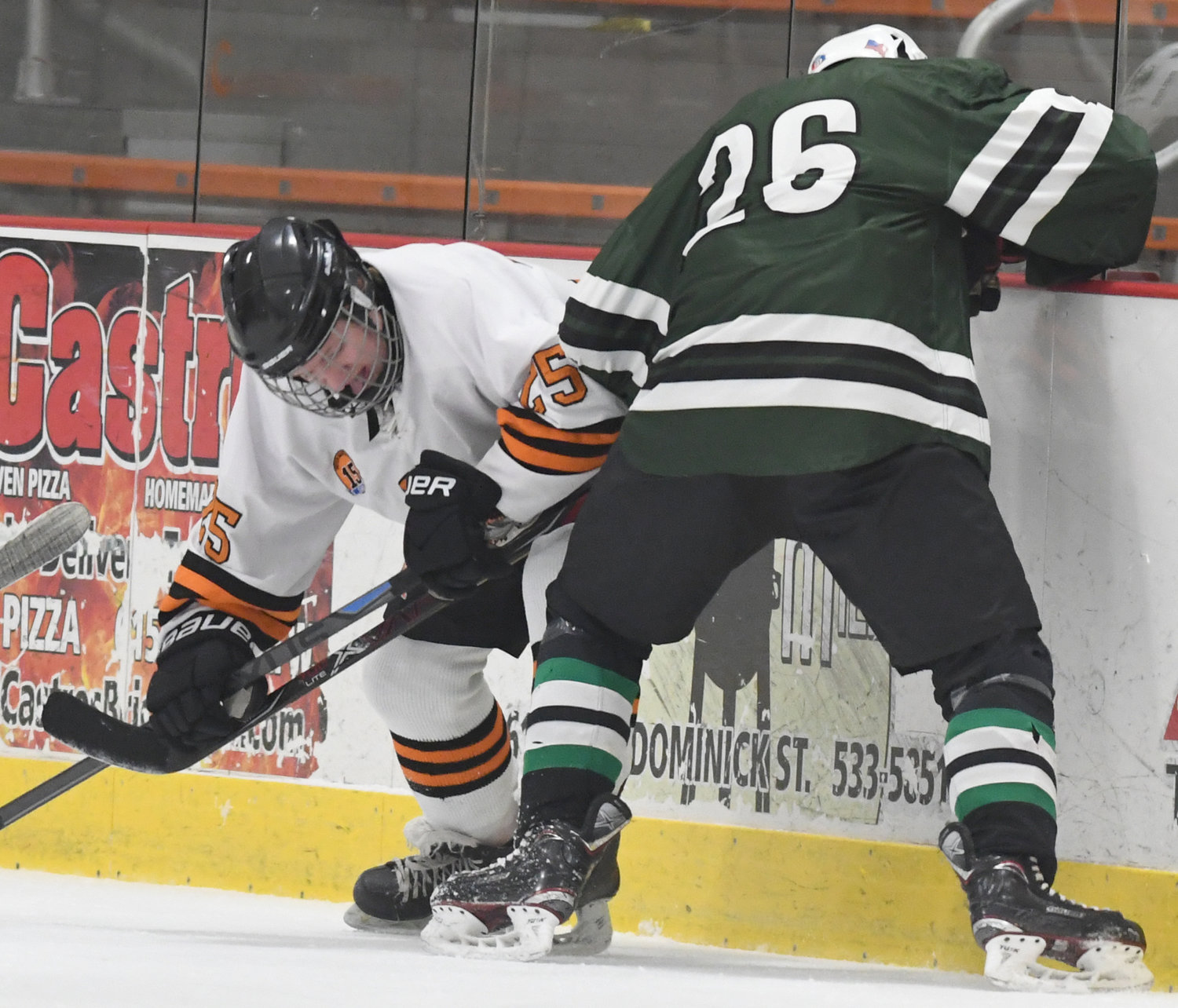 Fayetteville-Manlius got the first two goals of Tuesday’s hockey game against Rome Free Academy, and by the time the Black Knights got one past senior goalie Brandon Heyman it was too little, too late.

The Hornets won 2-1 for a key league win, putting an end to RFA’s attempt at a perfect home record.

RFA falls to 13-4 overall and is now 7-3 in Division I. But F-M is 6-2-1 in Division I, just behind RFA in the standings. Rome had won its first nine games at home this year.

RFA was to host Ontario Bay in a league game tonight but it has been postponed for a second time due to weather conditions in the Pulaski area. The game has been rescheduled for Wednesday, Feb. 6, at 7 p.m. at Kennedy Arena. RFA next plays Mohawk Valley at 7 p.m. on Friday in a league game at the Arena.

Rome and F-M spent the opening minutes feeling each other out before the Hornets struck first.

Co-captain Will Duncanson led the rush on the right side, pushing the puck through the legs of an RFA defender before firing a shot high that beat goalie Isaiah Nebush, ringing off the cross bar. His unassisted goal came with 6:17 left in the first period.

“Tonight was a tale of two halves,” said RFA coach Jason Nowicki. F-M controlled a key stretch of about 15 minutes as the game moved to the halfway point. Then, “we started to do some good things,” the coach said.

They had a breakaway denied by Heyman, a two-on-one snuffed out and a power play that couldn’t convert on any of its three chances.

Nowicki told his team in between the second and third periods: “The puck’s just kind of rolling on us.” Passes were just missing sticks as RFA’s chances to tie the game slipped away.

Then there’s the second goal scored by F-M, a freaky bounce off the boards Nowicki said he’s never seen in all his years playing and coaching at Kennedy Arena.

With 10:24 left in the second period, F-M extended its lead to 2-0. Zach Bookman fired off an initial shot that whistled over Nebush’s head and hit the end boards. The puck bounced back out past the goal and Spencer Sassenbury was there to pounce on it, firing a shot the beat Nebush.

RFA would close the gap with just over four minutes left to play, as Jake Hall took a backhanded centering pass from Danny Mecca and labeled a shot from almost point blank range past Heyman. Mecca and Griffin Eychner assisted on the score.

Sixteen seconds later, a wild series in front of the F-M net ended with the goal pushed off its moorings and a whistle to end the play just as a shot by Hall was headed for the back of the net. What would have been the tying goal was waved off. “I wish we had a few more minutes at the end,” said Nowicki after the loss. “We were figuring it out at the end there.”

In the end, Heyman’s 26 saves were enough to earn the victory. Nebush stopped 24 shots in the loss. “I’m disappointed with how our power play went tonight,” Nowicki said. “We didn’t settle into it.”

The game matched two teams that were “a mirror image of each other,” Nowicki said. He said he described F-M to his players as a team with a great goalie, puck carrying defensemen and forwards who make plays. “Does that sound familiar to you?” he asked his team, which he describes the same way. In the end, he said, he told the team “it was going to go to who worked hard.”

“These two teams are mirror images of each other,” said F-M coach Jim Wisnowski after the win. He said the game plan was to possess the puck and force RFA into mistakes. Another key was to make Mecca, an aggressive offensive defenseman, play defense, something he said the team had enough success with to get the win.

“It’s just preparation before the game,” said Heyman after the win. He focuses on making the initial save while the defenders clear out rebounds. Having two seniors and two juniors as veterans anchoring the defense is key, Wisnowski noted.

“This was a huge game,” said Wisnowski, but he noted the Hornets have more work to do to jump over the Black Knights in the standings.