The artistic legacy of a former Griffiss airman lives on 62 years later in a refurbished B-29 bomber in Kansas.“Doc” is a B-29 so named because of a painting of the Walt Disney character painted … 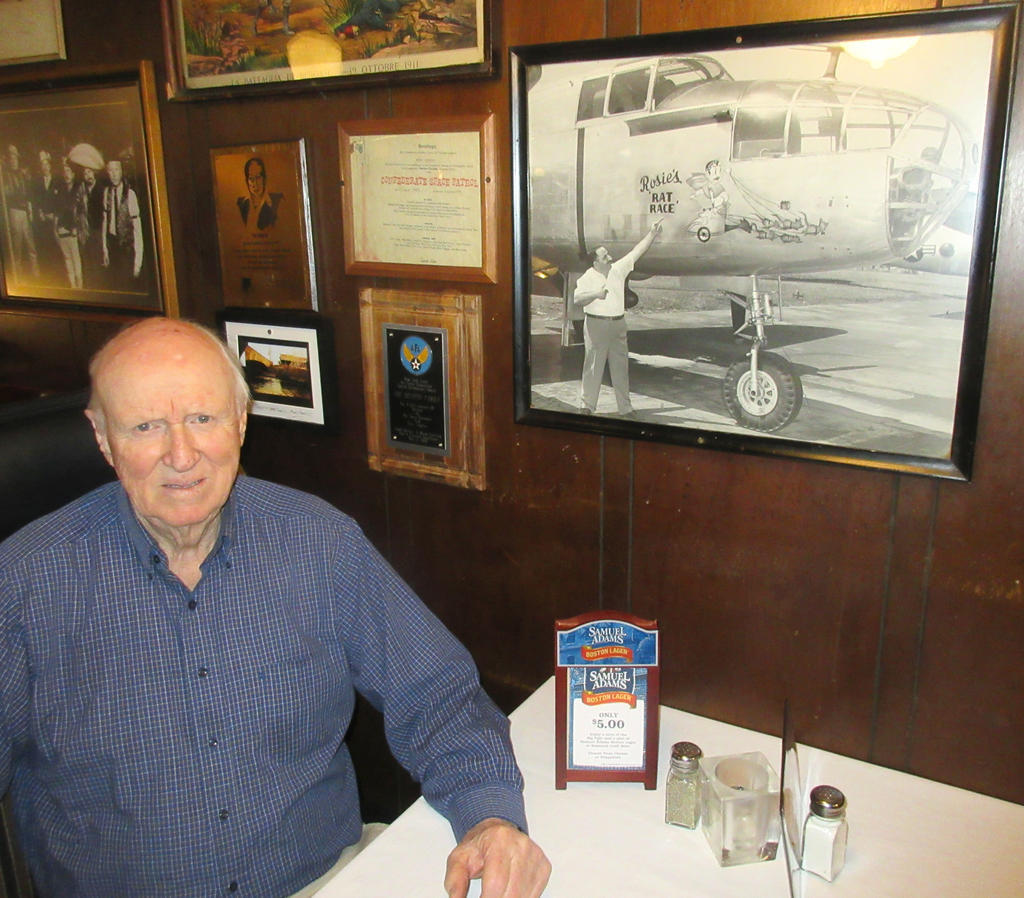 ROSIE’S RAT RACE — Former Air Force graphic artist Charlie Pfrimmer sits in the Savoy Restaurant by a photo of a B-25 which he decorated. In the picture, former Savoy owner Rosie Destito points to the artwork which was dedicated to him and the chariot races that were once held at the Beeches. Pfrimmer mad a series of paintings when he worked as an illustrator at Griffiss Air Force Base in the early 1950’s. (Sentinel photo by Roger Seibert) 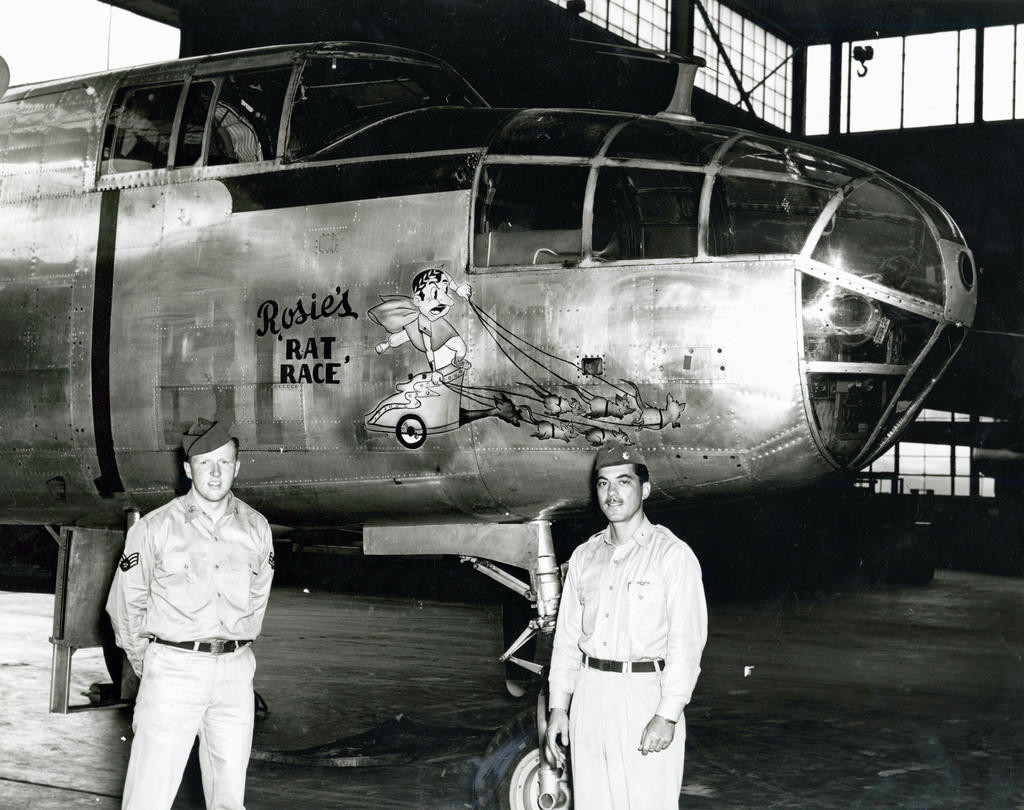 ANGELS ON OUR SHOULDERS — Charlie Pfrimmer, left, poses with Maj. Domenico Curto, Commander of the 1st Radar Calibration Squad, at Griffiss Air Base in the early 1950’s. Pfrimmer’s artwork can be seen on a restored B-29 named “Doc,” after the Snow White Dwarf that Pfrimmer painted on its nose. “Doc” is being rebuilt and made air-ready in Wichita, Kansas. (Photo submitted)
Previous Next
Posted Sunday, July 12, 2015 9:00 am
Roger Seibert

The artistic legacy of a former Griffiss airman lives on 62 years later in a refurbished B-29 bomber in Kansas.

“Doc” is a B-29 so named because of a painting of the Walt Disney character painted on its nose. Doc was one of the seven dwarves who helped Snow White in her adventures depicted in the Grimm fairy tale and later the 1937 Disney movie.

“Doc” was one of several B-29 bombers painted by Charlie Pfrimmer, a native of Montana who has lived in Rome since serving at Griffiss Air Base in the early 1950’s.

“I ended up painting 10 planes,” Pfrimmer said. “I made the Wicked Witch, Snow White, and each of the seven dwarfs.”

The 10th plane was a friendly dig called “Rosie’s Rat Race.” The painting depicted Savoy restaurant co-owner Rosie Destito dressed as a Roman Caesar in a chariot being pulled by five rats.

“They used to have chariot races at the Beeches,” Pfrimmer said. “The painting was a joke that reflected on those times.”

The B-29 Superfortress was a long-range bomber developed as the U.S. stepped up its war against Japan in the mid-1940’s. The army wanted aircraft that could fly 400 miles-per-hour, carry out 5,000 mile missions and carry a heavier tonnage of bombs.

It was a pair of B-29s that delivered Atomic bombs against the Japanese cities of Hiroshima and Nagaski in August 1945. Those bombs led to Japans’ unconditional surrender and saved America an estimated one million dead or wounded, casualties that would have occurred had the U. S. been forced to invade the Japanese mainland.

The B-29 was phased out of service by the mid-1950’s with the advent of jet-propelled bombers like the B-52 Stratofortress.

Several B-29’s exist today, including the “Enola Gay,” the B-29 that dropped the first atomic bomb on Hiroshima on August 6, 1945. These plans are in museums or are in various stages of disrepair at locations around the world.

One particular B-29 had been placed at a target range as a ballistic missile target in California’s Mojave desert but somehow managed to not get hit for 40 years. This plane had a certain bespectacled dwarf painted on its nose. It was rescued by the United States Aviation Museum and transported to Wichita, Kansas in 2000.

“Norm Spencer. who still lives in Rome near Delta Lake, used to work as an electrician on “Doc,”’ Pfrimmer said. “He recognized the serial number on the plane. He told me, “That’s my plane!” and let people in California and Kansas know what they had on their hands.”

“Doc,” which had served in Korea as a radar trainer, had gone home to where it was first built at the Boeing plant in Wichita. It was moved to the Kansas Aviation Museum in March 2007.

A group of volunteers continued work on “Doc” until money ran low. They formed a non-profit group named Doc’s Friends in February 2013. Work has been completed on engines, propellers and undercarriage.

Doc’s Friends continues to build support from the Wichita community. And work on “Doc” continues. The next phase of work on the plane involves installing avionics, instruments that aid in flying.

The plane’s four engines and their propellers had been rebuilt as of last month. Problems with overheating in the plane’s engines have moved back the timetable from the plane’s joining “Fifi,” the Texas-based B-29 that is only other restored plane of its class capable of flying, from its first flight until later this summer.

Information on “Doc” can be found on www.b-29doc.com.

Pfrimmer himself has been flying high since moving to Rome and serving at Griffiss Base. It was here that he found his calling, and started his family.

“I chose the Air Force because I wanted an education,” Pfrimmer said. “And my older brothers suggested it to me. At the time I had five friends who wanted to join the Army and fight in the Korean War. I wanted more civility, and it was good that I did. All five of my friends died over there.”

“I love it here in Rome,” Pfrimmer said. “But it’s different than Montana.”

Among the adjustments Pfrimmer made involved local cuisine.

“My friends would always want to go out and get this stuff called tomato pie. It was just tomato sauce on a crust, and I didn’t see the big deal,” Pfrimmer said. “But then I tried it, and I really liked it.”

One thing about Rome Pfrimmer liked immediately was his wife, Trudy Baynes, whom he met at a base dance. By that time he had been assigned as a graphic illustrator.

“We had 18 typists in my squadron,” Pfrimmer said. “Needless to say, that was a few too many. They saw that I could draw and paint and I was reassigned.”

It was after his new assignment as an illustrator that Pfrimmer made his mark as an artist. He did his paintings on the B-29 fleet located at Griffiss, and helped his superiors with various design assignments. Then he was shipped to Iceland.

“I liked Iceland, even though the countryside was rough and they have no trees there,Pfrimmer said. “The whole country is built on one big lava flow.”

Pfrimmer was used to the wild. While growing up in Montana, he enjoyed hiking and fishing and skiing. He’s from a family of artists. His father painted, and among other pursuits was a skiing instructor.

Pfrimmer’s five siblings enjoyed art in various forms. His brother Don is songwriter who lives in Nashville and has written for such performers as Charley Pride and Tim McGraw.

“One day I picked up some pencils and began doodling,” Pfrimmer said. “Before long I was drawing anything I could.”

Pfrimmer retired after working 42 years as a designer at Rome Labs. Trudy has passed on, but he stays in contact with his children, two daughters and a son who for a time painted watercolor portraits. He keeps busy with other activities.

“I still go out dancing, and I still love to ski and go fly-fishing.” Pfrimmer said. “Those are things I used to do in back home. I guess I still have a lot of Montana left in me.”